Accessibility links
New York Officials: Breast Milk May Be Best 'Formula' New York City officials hope an initiative will help more new moms choose breast-feeding over baby formula. Some critics are sour on the idea, urging the government to stand back and not create another layer of pressure to already-anxious new parents. 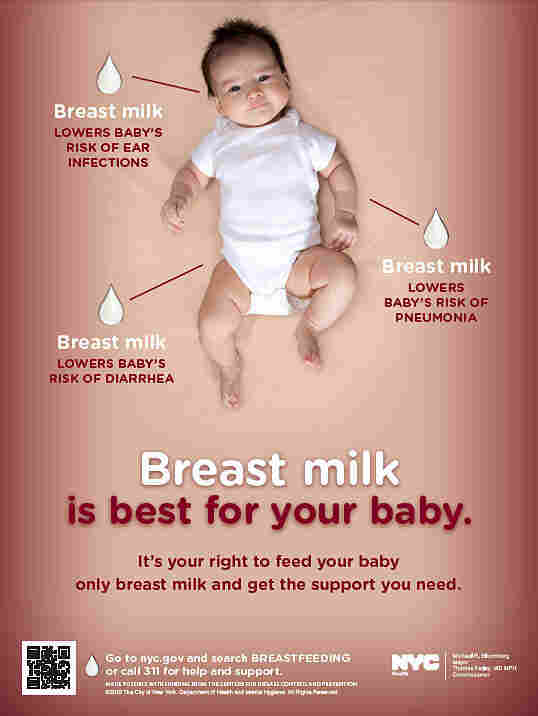 City leaders want to encourage more new moms to breast-feed their babies. One of several "Latch on NYC" posters promoting the initiative. Courtesy of the NYC Department of Health and Mental Hygiene hide caption 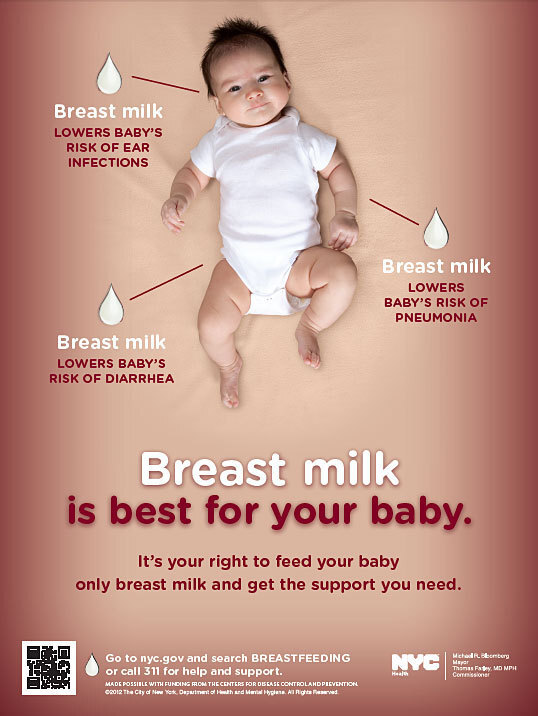 City leaders want to encourage more new moms to breast-feed their babies. One of several "Latch on NYC" posters promoting the initiative.

Courtesy of the NYC Department of Health and Mental Hygiene

Starting next month, dozens of hospitals will participate in "Latch on NYC," an initiative aimed at encouraging new moms to breast-feed instead of using baby formula.

Health care professionals say breast-feeding is better for both mother and baby.

But critics — many of them mothers — say the city is inserting itself where it doesn't belong.

The maternity ward at North Central Bronx Hospital sees about 1,700 births a year. Long before those babies arrive, their mothers have heard about the benefits of breast-feeding.

"It's always the right temperature, the right everything, the right ingredients, so it's more convenient," says America Trevino, a lactation consultant at North Central Bronx. She says breast-feeding can also help new mothers lose weight. And breast milk contains antibodies that can help infants fight off disease.

"The baby doesn't have any way of fighting infections in the beginning," Trevino says. "But it's getting the protection from the breast milk, through antibodies that help to build a strong immune system to fight off infections."

You're asking women to do something hard and basically making them feel bad if they fail.

That's what convinced Dominique Trinidad to breast-feed her daughter, who was born here three days ago.

It's healthier for her, she says. "And it's easier. You don't have to prepare any in the bottle."

Hospital officials are quick to point out that Trinidad could get baby formula if she wants it or if there's a medical reason to use it. But it's clear that they want to steer new moms away from the bottle.

North Central Bronx is one of 27 hospitals in New York that are participating in the "Latch on NYC" initiative. They've agreed to stop giving away free formula in gift bags from manufacturers and to make nurses sign out bottles of formula as they would any other medication. Policies like these are already in place at many hospitals. Still, the initiative touched a nerve with critics — including many mothers.

"You're asking women to do something hard and basically making them feel bad if they fail," says Ada Calhoun, author of Instinctive Parenting, and founding editor of the parenting website, Babble.com.

Breast-Feeding Gets A Boost Amid The Health Policy Wars Feb. 11, 2011

She was able to breast-feed her son for almost a year, but she knows a lot of mothers who weren't — either because they couldn't find a way to breast-feed at work or because their bodies just wouldn't comply. And Calhoun says some of them felt pretty guilty about it.

"New moms are pretty vulnerable people and you feel all the time like you're screwing something up," she says. "Everybody has these incredibly strong ideas about what other women should be doing. And especially when you hear it from men, it can be pretty irritating."

It probably doesn't help when the man delivering the message is Mayor Michael Bloomberg, who's also known for his campaign to ban smoking and large sugary sodas. Though Bloomberg pointed out this week that the city is not going to ban baby formula, regardless of container size.

"Most public health officials want to encourage women to breast-feed at least for the first couple weeks because the outcomes are better," he says. "And if they can do it, that's great. And if they can't, they can't. We're not making anybody do it. We're suggesting."

Public health officials say the city is simply trying to push back against the big-money marketing efforts of companies that make infant formula.

"What I see from this campaign is that we're actually trying to raise awareness for the benefits of breast-feeding," says Wendy Wilcox, vice chairwoman of the OB-GYN department at North Central Bronx Hospital. "It's not really selling a product; it's letting moms know that what is best for their babies, they actually have themselves.

Wilcox admits she's a little surprised that there's still a debate over breast-feeding. But she hopes the controversy over "Latch on NYC" will help make more women aware of them.