Accessibility links
Kenya's Youngest 'Outcasts' Emerge From Shadows Children with disabilities — estimated at more than 1 million — are shunned in Kenya as curses from God, shut away and largely neglected. Some nonprofits are helping these children and their families. But such programs are just a drop in the ocean given Kenya's paucity of basic human services. 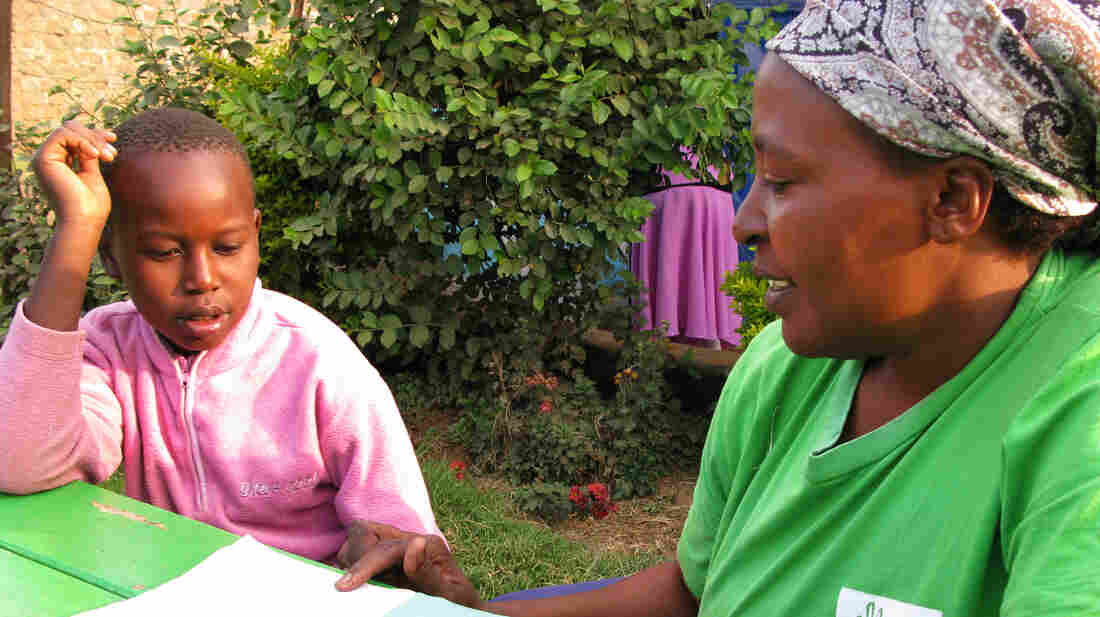 Alice Njeri found work, and her 10-year-old son Mike — who is physically and mentally disabled — received therapy and other services at a community center in Maai Mahiu, outside Nairobi, Kenya. John Burnett/NPR hide caption 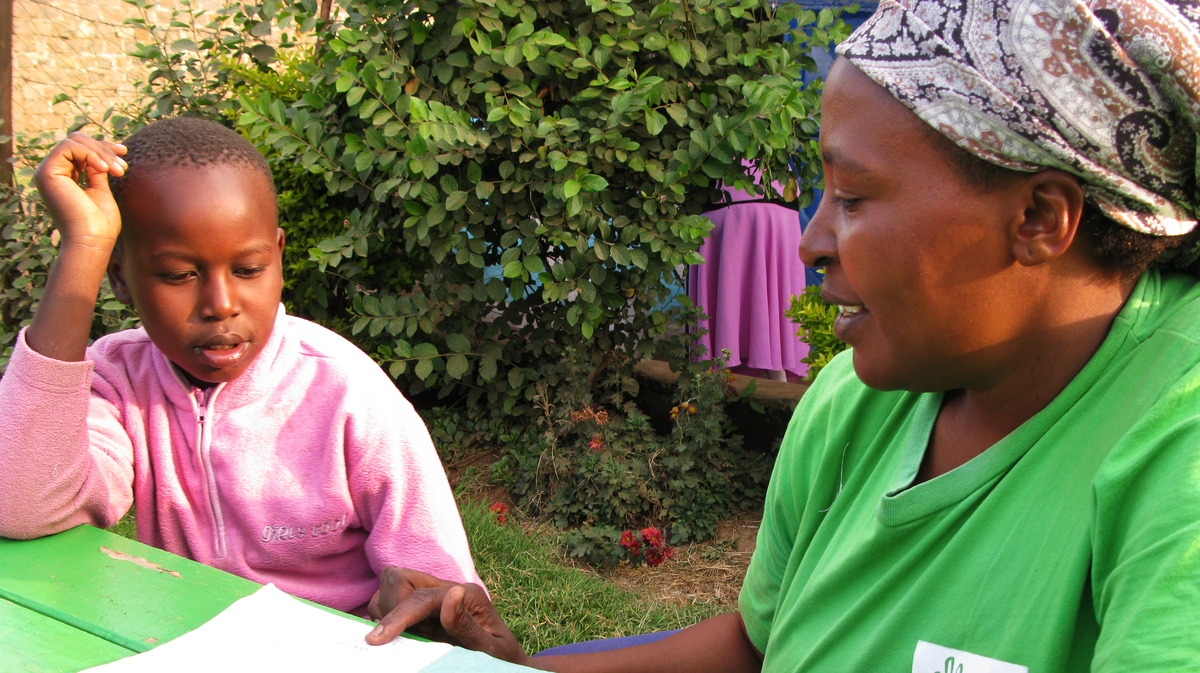 Alice Njeri found work, and her 10-year-old son Mike — who is physically and mentally disabled — received therapy and other services at a community center in Maai Mahiu, outside Nairobi, Kenya.

Kenyan Alice Njeri knew by the fourth month that something was terribly wrong with her infant son, Mike. When the baby boy was in the hospital recovering from a case of pneumonia, the doctors told Njeri that he was paralyzed on his left side and mentally disabled.

It appeared that Mike would grow up severely disabled in a country that shunned children with disabilities as curses from God.

Njeri left the house every day to pick up menial labor working in gardens for $1 a day — the going wage for unskilled labor in Kenya — in order to help support the other four in their family.

With her other children at school, that meant leaving Mike alone every day on the floor of her apartment. She returned every afternoon to find him filthy and distraught.

Njeri chose not to take Mike out in public.

"When you get a handicapped child [in East Africa], people think you are cursed or a big sinner," she says. "We don't take our children outside. People talk about the child, they spit on him as a show of disapproval. They don't want to see him."

Things got only worse at home.

When Mike turned a year old, Njeri says, her husband started to abuse him because of his unresponsiveness and lack of development. Her husband would try forcibly to stretch out Mike's contracted limbs, believing that would "fix" them. The pain caused the child to cry more, which led to additional beatings.

Shortly after, her husband deserted the family, leaving Njeri to support the five children by herself.

An estimated 1.3 to 1.8 million Kenyan children are disabled, according to Special Education Professionals (SEP), a group of international therapists and special needs teachers who help children with disabilities in Kenya and other developing countries.

"Traditional beliefs can cause parents ... to ignore or even hide away their child," a recent SEP report says. "Lack of knowledge about their child's condition can mean they do not know how to provide quality care and do not realize that significant improvement and progress is possible."

Luck, Love And Lots Of Therapy

Njeri lives in the town of Maai Mahiu, about a half-hour drive northwest of Nairobi. It is known, depending on one's circumstances in life, as the intersection where safari minibuses make the turn to ferry tourists to a game park to watch giraffes and lions, or as a truck stop on the road to Uganda where drivers stop for refreshment and prostitutes — hence the road's nickname, "The AIDS Highway."

That Njeri lived in Maai Mahiu, of all places, proved to be a stroke of good fortune.

The gritty way station is home to two high-quality facilities for children: the church-run AIC Kijabe Hospital and Comfort the Children International (CTC), a humanitarian nonprofit based in Austin, Texas.

When Mike was 2, Njeri began taking him to Kijabe, and when he was 6, she brought him to CTC. CTC operates a community center that provides, among other services for the poor, teachers and therapy for children with special needs. CTC currently works with 25 disabled kids, with 80 more on a waiting list.

"These kids sat on the floor all day, some were chained all day, no stimulation for years, the father has usually left," says Zane Wilemon, CTC executive director and an Episcopal priest. "Their mothers couldn't take them out because some Kenyans think having a handicapped kid is a punishment from God. These are the outcasts of the outcasts."

With regular massage therapy, adaptive furniture, toys, stimulation, socializing and trained caregivers, Mike's condition improved steadily. Today, the 10-year-old stands straight, doesn't hobble on the side of his foot anymore, can count to 100, and write his letters.

While Njeri tells her story in her soft voice, Mike sits next to her quietly at a picnic table in front of the CTC community center.

Njeri's luck changed, as well. She got a job with other mothers of kids with disabilities sewing tote bags for CTC, which are sold in Whole Foods markets in the U.S.

Njeri now earns an eye-popping $200 a month at the sewing center, which has enabled her to take care of Mike — her other four children are grown — and rent a decent apartment. Indeed, the job has reversed her social status.

"Now working here has gone from being a stigma to being an honor," she says.

"It's considered the best job in town," Wilemon adds, smiling sadly. "Women have come to us with healthy children saying they're disabled so that the mother can join our program."

The unique arrangement in Maai Mahiu is a drop in the ocean given Kenya's vast paucity of basic human services. Njeri is among the 2 percent of Kenyans who have access to any kind of care for children with disabilities.

SEP says some statistics suggest that people with disabilities account for 6 out of every 10 of the poorest people in Kenya, which has a total population of about 43 million.

The government is not blind to this segment of society. In the last decade, Kenya passed laws, formed a council and created a development fund for people with disabilities. SEP reports the country continues to suffer from extremely limited government resources to improve conditions.

And despite the well-intentioned initiatives, SEP concludes, "There remains a great distance to travel to change attitudes and remove stigma about disability in Kenya."