Accessibility links
How America's Losing The War On Poverty Close to 16 percent of Americans now live at or below the poverty line. On top of that, 100 million of us — 1 out of 3 Americans — manage to survive on a household income barely twice that amount. How is this poverty crisis happening? 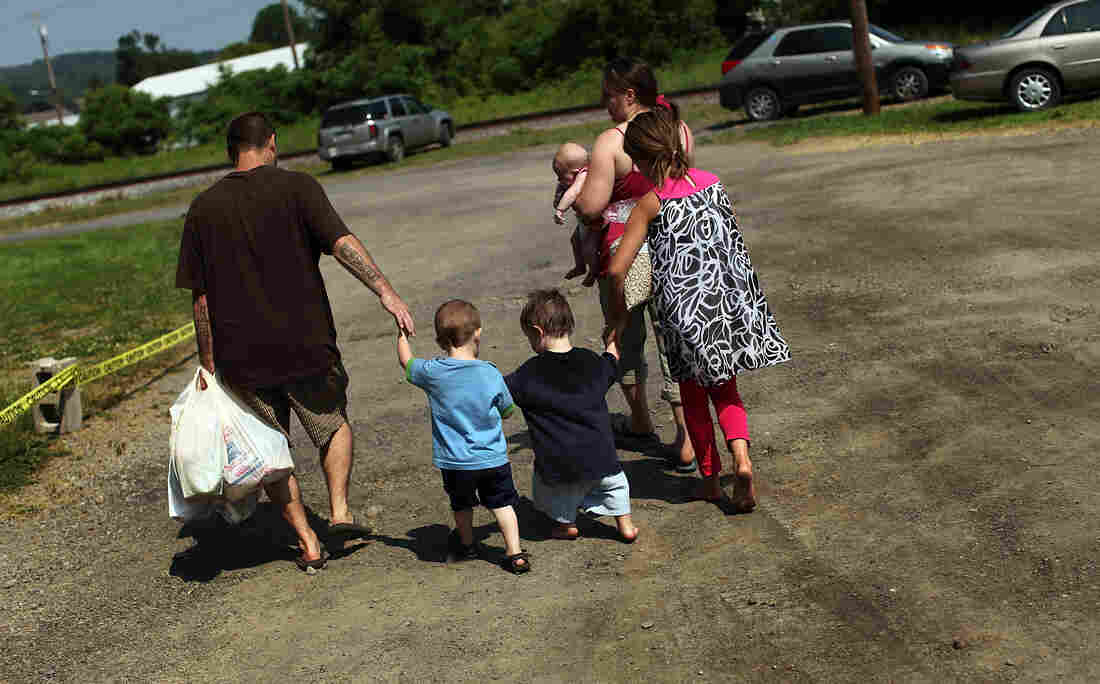 Members of the Dolan family walk home with bags of food from the Southern Tier Mobile Food Pantry in Oswego, N.Y., in June. Food banks across the nation are reporting giant spikes in demand. Spencer Platt/Getty Images hide caption 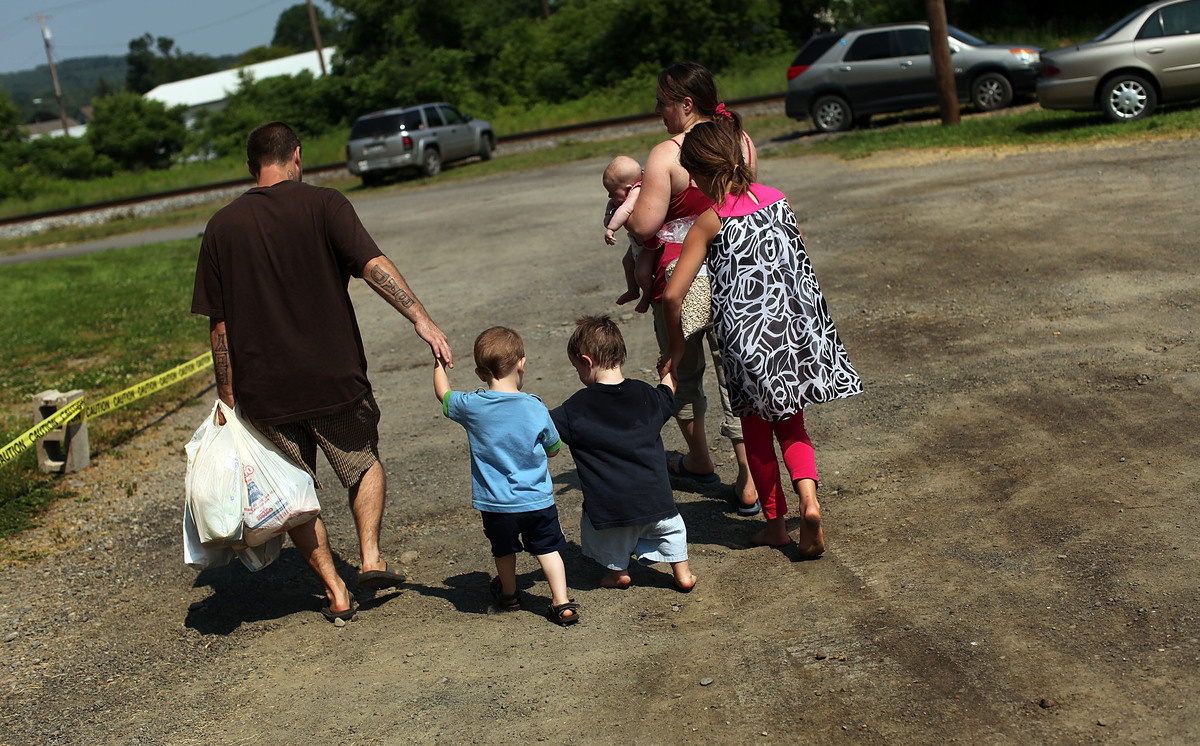 Members of the Dolan family walk home with bags of food from the Southern Tier Mobile Food Pantry in Oswego, N.Y., in June. Food banks across the nation are reporting giant spikes in demand.

While President Obama and Gov. Romney battle for the hearts and minds of the middle class this election season, there's a huge swath of Americans that are largely ignored. It's the poor, and their ranks are growing.

According to a recent survey by The Associated Press, the number of Americans living at or below the poverty line will reach its highest point since President Johnson made his famous declaration of war on poverty in 1964.

Close to 16 percent of Americans now live at or below the poverty line. For a family of four, that's $23,000 a year. On top of that, 100 million of us — 1 out of 3 Americans — manage to survive on a household income barely twice that amount. How is this poverty crisis happening?

'I've Never Seen Anything As Bad As Now'

Across the nation, food banks are reporting giant spikes in demand. The food pantry in Webster Springs, W.Va., used to serve 30 families a month just three years ago. Today, 150 families in that county — of just 9,000 people — depend on the food pantry run by Catholic Charities.

This administration today, here and now, declares unconditional war on poverty in America. I urge this Congress and all Americans to join with me in that effort.

President Lyndon B. Johnson, 1964 State of the Union address

Webster Springs is a hard-hit area. Two coal mines have closed down there in the past year. The median income is around $20,000. Yet the crisis is also taking place right in our nation's capital.

At the Capital Area Food Bank in Washington, D.C., forklifts move huge pallets of food around this giant warehouse. This year, they expect to give out 33 million pounds of food — a record. Close to 700,000 people in the region are now at risk of going hungry.

"In my lifetime, I've never seen anything as bad as now," says Lynn Brantley, who runs the facility. She's been working with food pantries for four decades and describes what's happening today as a hunger crisis. "It's growing into the middle class."

There is increasing overlap between those who used to be firmly in the middle class and those who are poor. Most Americans who are poor are still white, but that's also changing, says Angela Blackwell, who runs PolicyLink, a research and advocacy organization that focuses on poverty.

"The face of poverty for the nation has changed from being white to being black and Latino," she tells weekends on All Things Considered host Guy Raz. "That's made a difference, too, because when people thought of poverty as being white and elderly there was more general sympathy in the country and more commitment to do something about it."

It's estimated that the percentage of Americans living in poverty will increase to 15.7 percent this year, the highest in 50 years. "That shocking statistic really only represents the people who live below the official poverty level," Blackwell says. "But you have twice that number [of] people who are living near poverty."

In 1988, President Ronald Reagan delivered a State of the Union address in which he declared that the war on poverty had failed. Now, with the poverty rate in America expected to reach its highest rate since 1965, it looks like Reagan may have been right.

Not so, says Peter Edelman, a professor at Georgetown University and an expert on poverty, but, he tells Raz, there is a lot to worry about.

"One reason is we're still in a recession," Edelman says. "We've had a change in our economy over the last 40 years that has produced a flood of low-wage jobs."

One half of all jobs in the U.S. today now pay less than $35,000 a year. Adjusted for inflation, that's one of the lowest rates for American workers in five decades.

There's a common perception that somebody who's poor or living below the poverty level is lazy or simply living off government handouts. Edelman says the actual average poor person is working.

"And working as hard as she or he possibly can," he says. "And particularly in the recession, not able to get work or steady work. There are certainly people who make bad choices, but the fundamental question in our economy is the number of people who are doing absolutely everything they can to support their families — and they just can't make it."

Some Battles Won, But Threats Loom

Back when LBJ declared his war on poverty, being poor looked very different than it does today. Traveling in Mississippi with Robert Kennedy in 1967, Edelman saw children with bloated bellies and sores that wouldn't heal. There was real hunger and real malnutrition.

"The food stamp program is a tremendous success," he says. "But since that time, it turns out that children are the poorest age group in our country because their families — typically single moms trying to make it — can't do so because of this flood of low-wage work that we have."

Many economists say that when the economy does recover, a lot of the jobs that were lost won't be coming back. That suggests the possibility of significantly high unemployment for a long time — maybe even a permanently large class of Americans who live in poverty. Blackwell says we can act to prevent that future. "And it's not rocket science."

"We know now that by 2018, 45 percent of all jobs in this nation will require at least an associate's degree," she says. "We could invest in the system of training — particularly focusing on community colleges and preparing people to go to four-year institutions and improving our high school education."