Accessibility links
In The E-Book World, Are Book Covers A Dying Art? For the past 25 years, Chip Kidd has made a name for himself as a top book designer. His designs have helped transform books into visual icons. But in the brave new world of e-books, where covers are often shrunk to thumbnail sketches on a screen, will beautifully designed covers become a dying art?

In the olden days, a reader might pick up a book because the cover was exciting, intriguing, maybe even beautiful. But in the brave new world of e-books and e-readers, the days when an artist named Chip Kidd could make us reach for a book may be gone. 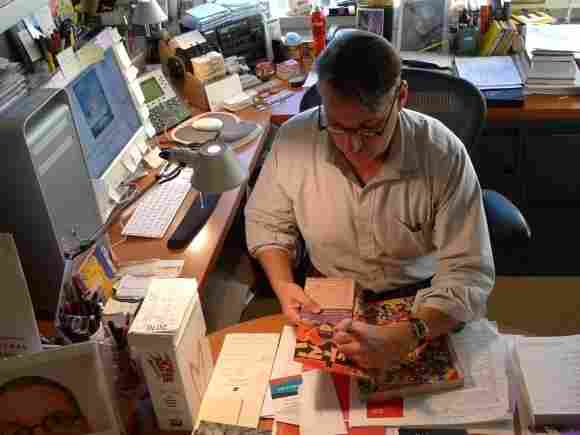 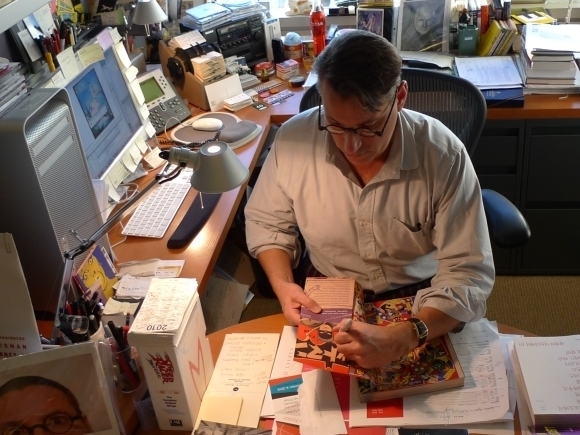 Kidd, an associate art director at publisher Alfred A. Knopf, has designed book covers for the past 25 years for authors like Cormac McCarthy, John Updike, David Sedaris and Michael Crichton. Remember the menacing Tyrannosaurus rex skeleton on movie posters for Jurassic Park? The original version was Kidd's cover design for the novel.

Earlier this year, Kidd gave a TED talk on the art of designing books. He told the audience that while e-books offer convenience, the growing digital publishing world risks losing "tradition, a sensual experience, the comfort of thingy-ness, [and] a little bit of humanity."

"They need some kind of visual representation, whether you're going to be seeing them the size of a postage stamp on a computer screen or a smartphone, or sitting on a table, or on a shelf, or in a bookstore," he says.

A veteran of the book publishing industry, Kidd understands that his book designs ultimately must help serve the bottom line. His designs can be effective in helping new titles stand out in a bookstore display, but on the online marketplace, a beautifully designed cover can only get you so far.

But he's not worried about sticking to old-fashioned ways.

"Hardcover books are, frankly, luxury items, and they sort of always have been," he says. "And I think there will be a market for them."