Accessibility links
Could 2012 Be The Year Of The Asian Voter? Asian-Americans make up the fastest-growing segment of the population, notably in key swing states including Virginia, Nevada and Florida. What's more, they're often independent voters — and the way they swing could have a big effect on the presidential election. 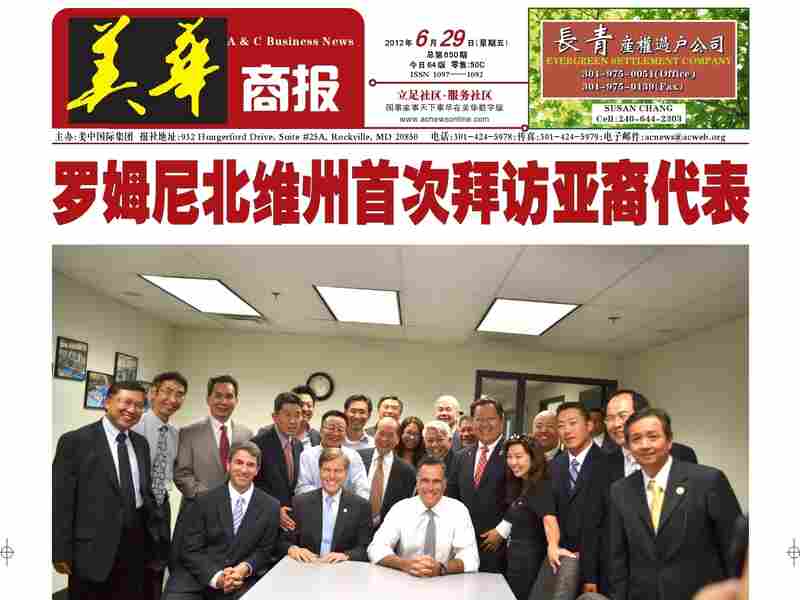 Mitt Romney and Virginia Gov. Bob McDonnell were featured on the front page of a Chinese-language newspaper following a visit to the Northern Virginia's Asian-American community in June. Such engagements with the Asian community helped McDonnell win his current office. Courtesy of Peter Su hide caption 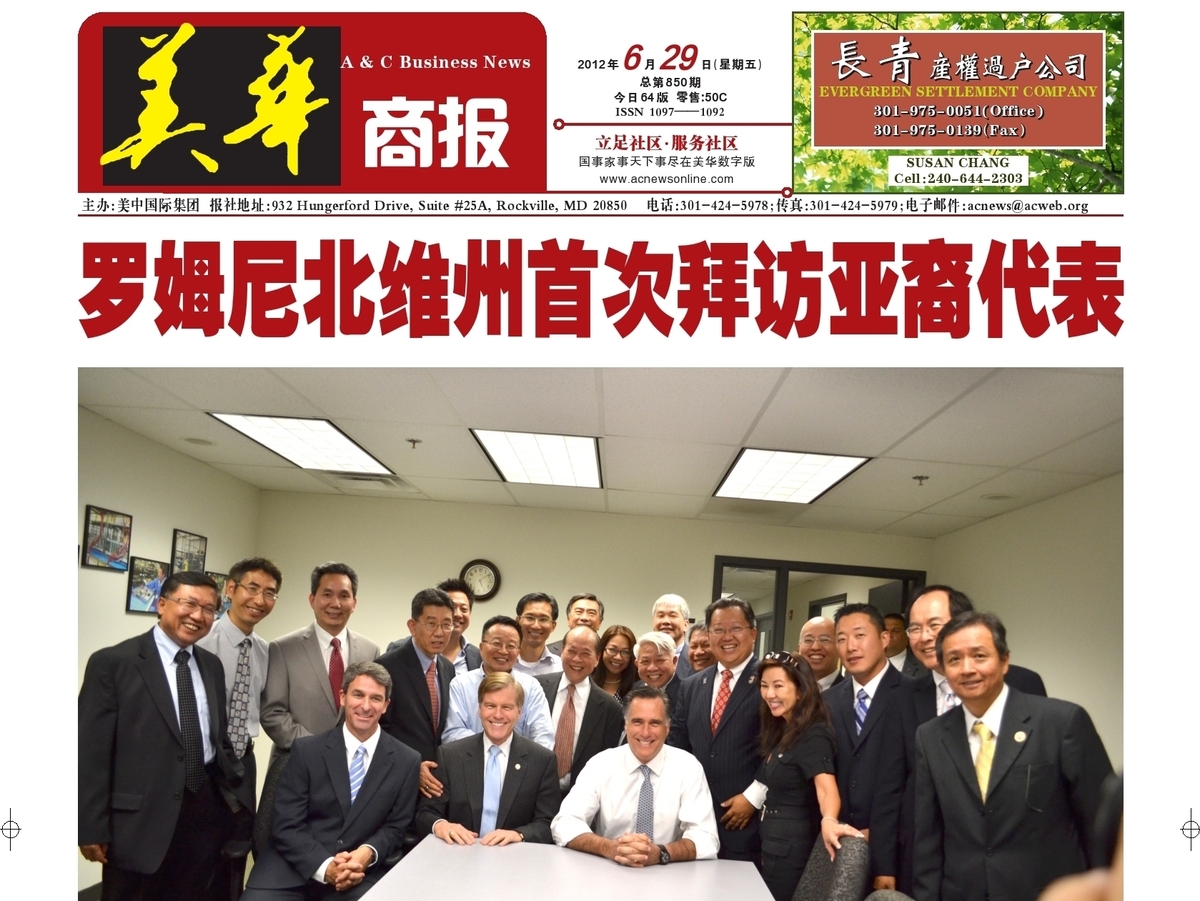 Mitt Romney and Virginia Gov. Bob McDonnell were featured on the front page of a Chinese-language newspaper following a visit to the Northern Virginia's Asian-American community in June. Such engagements with the Asian community helped McDonnell win his current office.

There's a man in Virginia who could quite possibly hold the key to a Mitt Romney victory in November.

Su is making a name for himself in Republican circles because in 2009, he managed to help Virginia's Republican Gov. Bob McDonnell win his election with 60 percent of the Asian vote in northern Virginia.

That was only a year after Asians came out overwhelmingly in support of Democrats and Barack Obama for president. How did Su do it? By knowing where to target those efforts.

"In northern Virginia, there are four separate Chinese schools, each with over 2,000 families," Su tells Guy Raz, host of weekends on All Things Considered. "In the Korean community, the Korean churches are very strong. Most families are church-based. And therefore we were able to go into those churches.

Su, who is Chinese-American, also had McDonnell sit down for interviews with editors at small newspapers published in the U.S., but written entirely in Korean, Chinese, Vietnamese and other Asian languages.

Su says if Romney can replicate McDonnell's success with Asians in Virginia, it could swing the state in the Republican presidential hopeful's direction. That, in turn, could possibly swing Romney the presidency, which may make 2012 the year of the Asian voter — not least because Asian-Americans make up the fastest-growing minority group in America.

In this political ad, Asian American and Pacific Islanders working for the Obama campaign encourage members of their community to re-elect the president.

"In a tight election, all you need is 40,000 votes [to] swing one way or another," Su say. "And in northern Virginia, there are 420,000 Asian-Americans. If they tilt one way or another, it doesn't have to be an 80/20 situation. They just have to split the votes and that could impact either campaign in a major way."

Campaigns Reach Out To Asian Voters

"As you know well, Asian-Americans and Pacific Islanders have a wonderful culture that enriches all of America," Romney says straight into the camera in a new online video that his campaign is circulating.

It's a pretty straightforward appeal — nothing flashy and nothing like the ad the Obama campaign is using to target Asian-American voters.

A slickly produced ad features Asian campaign workers, under a tab for Asian-Americans and Pacific Islanders on President Obama's website.

"As far as being an Asian-American voter is concerned, President Obama is very clearly the right choice to make," one campaign worker says. "He has had more Asian-American Cabinet members than any other president in history."

Here's the tricky part of the equation: Asians make up arguably the most diverse population group in America. The term "Asian" can include people of Indian, Pakistani, Korean, Vietnamese, Chinese and Japanese origin, among others.

South Asians — Indians and Pakistanis — have been mostly pro-Democratic voters for the past decade. Even with prominent Republican Indian-Americans in office such as Louisiana Gov. Bobby Jindal and South Carolina's Gov. Nikki Haley, polls show South Asians are more likely to vote for Obama than Romney.

So the battleground is — at least this year – for East Asians, because a majority of them are still undecided.

"There is a tradition of not appreciating the rapid demographic changes in America by certain Republican consultants," says Shawn Steel, the former chairman of California's Republican Party.

For decades, Steel has been looking at the coming demographic shift in America, and for good reason.

Within a few decades, white voters will no longer be a majority. Census projections show that by 2050, 1 out of 10 Americans will be of Asian origin.

Steel has been shouting from the rooftops about bringing Asian voters into the Republican fold. Now, more Republican strategists are starting to listen to him.

"The future of the Republican Party has got to be with the Asian-American community," Steel says. "They're generally more successful and mindful of quality education. They have a strong entrepreneurial streak with a high percentage of small businesses, and for many of the Asian immigrants, they have a healthy distrust of government."

Steel is optimistic that these characteristics will translate into votes for Republican candidates, including Romney. He says there's no reason that Romney should not be able win over 60 percent of the Asian vote — which is about the rate at which Asian-Americans voted for Obama in 2008.

Still, Steel says, "In very close polls, the one community that still hasn't made up their mind in terms of deciding for president are still Asian-Americans, many of whom are independent voters."

Take the members of the Korean United Methodist Church in McLean, Va. Many parishioners there see themselves as independent, and others have switched allegiances after decades of consistently supporting one party or the other.

"I go back and forth," says Yong Lim, 49, who says she sides with Republicans on issues like abortion.

"But then there [are] some other aspects of social programs for the immigration, helping the poor, and some government programs that I identify closer to Democratic ideas."

"I feel like there's no perfect party," she says.

Many Korean Christians who see themselves as evangelicals hold a distinctive view toward favoring a bigger government than most other evangelicals, says Janelle Wong, director of Asian-American Studies at the University of Maryland.

Despite often strong religious views, Asian-Americans have voted mostly for Democrats, because they are concentrated in states that vote pro-Democratic, but that's changing, Wong says.

"We are seeing larger populations and fast-growing populations in a couple of swing states, [like] Nevada, Virginia — they're considered top destinations for Asian-Americans," Wong says.

This pattern hasn't been lost on either presidential contender, but Wong says Asian-Americans have historically been the least mobilized of any ethnic group.

"I don't know if Asian-Americans will change the election in 2012," she says, but "if the political parties started to invest in this community, they will likely see payoff in the future."