Accessibility links
In Warhol's Memory, Soup Cans And Coke Bottles While the cemetery that houses the artist's grave is conventional, the grave site itself is anything but. Fans and admirers regularly leave colorful mementos on his tombstone outside of Pittsburgh, and a local artist and Warhol historian even holds graveside birthday parties for the late pop art con. 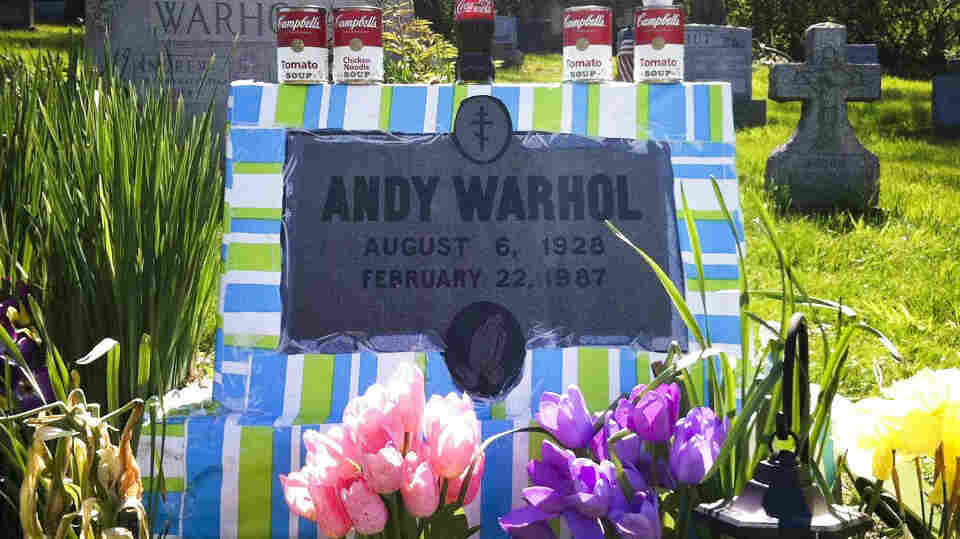 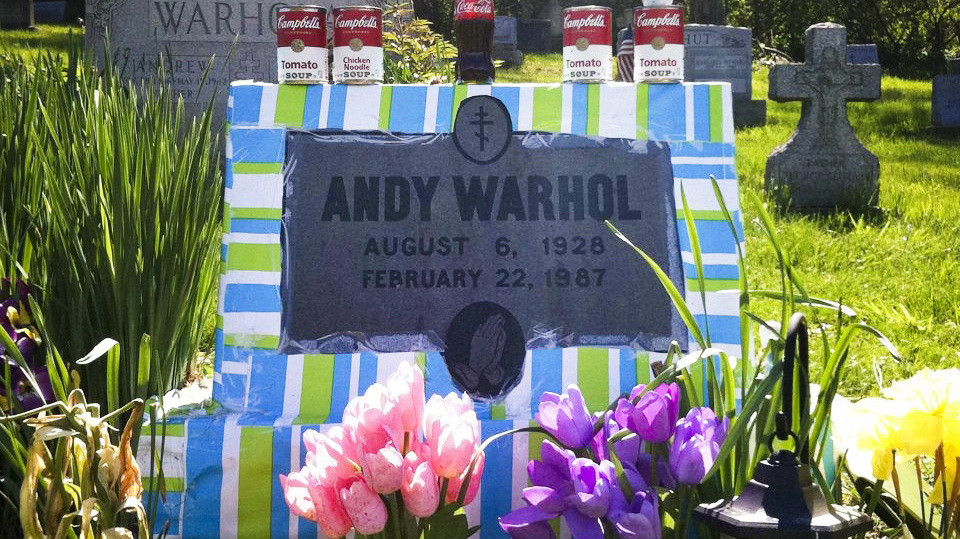 Fans leave all manner of mementos at Andy Warhol's grave site, near Pittsburgh. This spring, a local Warhol impersonator wrapped the grave stone in colorful paper for an entire month.

Andy Warhol is often remembered as larger than life, but it's all too easy to miss where he's buried.

The pop artist's grave is in the modest St. John the Baptist Byzantine Catholic Cemetery, on a hill overlooking a highway about 20 minutes outside of downtown Pittsburgh.

Eric Shiner, director of the Andy Warhol Museum, says it's a pretty typical cemetery for Pennsylvanians with Eastern European roots.

"Which is, of course, ironic," Shiner says. "That the arbiter of taste and style and art of the 20th century is laid to rest in an otherwise very mundane graveyard."

Warhol was buried there in 1987, after dying unexpectedly while recovering from gallbladder surgery at New York Hospital. His relatives wanted him buried in the same place as his parents: just outside Pittsburgh, the city where he was born.

It's often said Warhol once suggested his tombstone should be blank except for one word, "figment."

Instead, the unconventional Warhol has a fairly conventional tombstone. There's a cross representing the Byzantine Church, a picture of hands praying and the name he adopted as an artist, "Andy Warhol."

Warhol's parents share a larger tombstone right behind his.

In short, there's absolutely nothing exceptional about Warhol's grave, save for what visitors add to it.

For about a month in spring, a local Warhol impersonator decorated the tombstone with striped green, blue and white wrapping paper.

Other visitors leave items that were subjects of Warhol's famous silkscreen prints, such as bottles of Chanel perfume or Coca-Cola.

The objects turn his simple grave into a shrine. 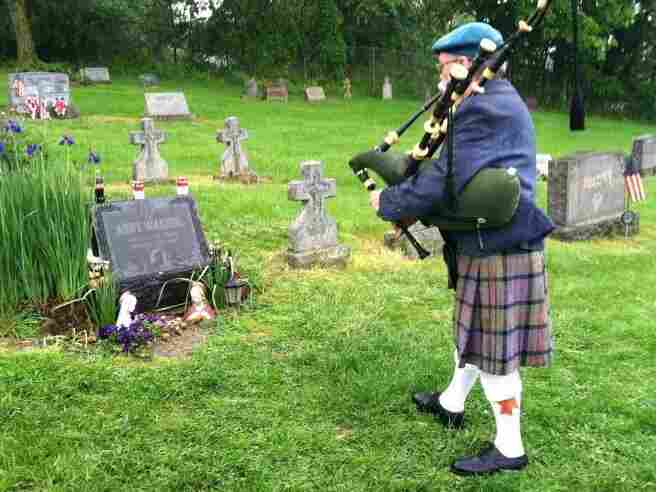 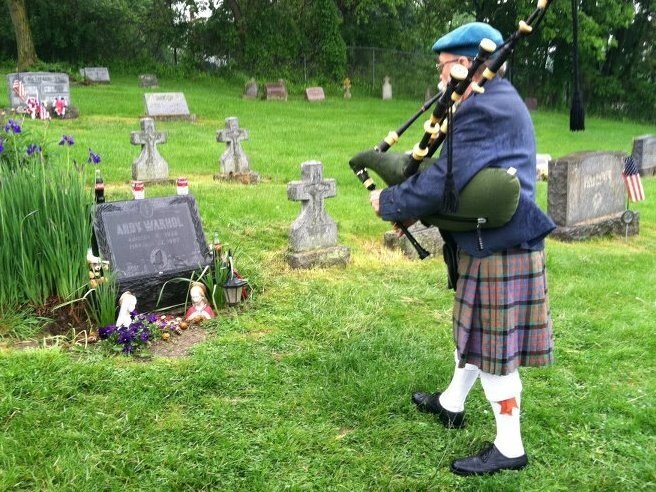 Artist Madelyn Roehrig has documented the additions as part of a project she began four years ago. She calls it, "Figments: Conversations With Andy."

Roehrig says the items most commonly left at the grave are cans of Campbell's soup. She says she's seen more than 100 over the years.

"Sometime there are so many soup cans up there, there's like two rows of them," she says.

Roehrig says she's seen all sorts of flavors — "Mainly tomato, and chicken noodle, and all the varieties of chicken noodle. Now you're getting low fat, low salt.

"And then some of the competition," she adds. "Cup-O'-Noodles show up every once in a while, and it kind of stands out, you know. I don't know why somebody would want to do that, but they do."

Roehrig, who works at the Carnegie Museums in Pittsburgh, visits the grave almost every day, and snaps regular photos of the grave to track the objects visitors have left behind.

She also collects any notes left for Warhol, and if visitors stop by, she'll interview them on camera and ask what they would like to say to the artist.

Roehrig says she's met people from all over the world who make the pilgrimage to this tiny cemetery.

Locally, she's inspired a number of offbeat types to drop by the grave from time to time to pay their respects. Many refer to the artist as simply "Andy."

Dave Olson is a musician who knew one of Warhol's brothers. He read about Warhol's grave on Facebook and one day, on a lark, decided to play his bagpipes at the cemetery.

Now Olson makes visiting the grave part of his routine. His pipe band meets at a church near the graveyard.

"I would just come up here early before band practice while it was still light, and I'd say my piece with Andy, and then rush off to band practice," Olson says.

For Warhol's birthday, Roehrig throws a party at the cemetery. There's cake. A bellydancer shows up. And Roehrig films it all.

Donald Warhola, Andy Warhol's nephew, tends the grave, and says his uncle would have loved the idea.

"I think that my uncle, from up in heaven, he's probably looking down and would probably say, 'Why didn't I think of that? I could have been hanging out at Marilyn Monroe's tombstone with my camera or my tape recorder and getting people's thoughts.'"

A Year In The Life Of A Grave Site

Madelyn Roehrig made a video compilation of her photos of Andy Warhol's grave, and the objects fans left there, between March 2009 and March 2011.