Accessibility links
Sinai Attack Dashes Hopes For Closer Gaza-Egypt Ties The attack near the Rafah border crossing that left 16 Egyptian soldiers dead is having repercussions in the Gaza Strip, which is ruled by the militant Islamist group Hamas. Its leaders hoped Egypt's new Islamist president would help Gaza break out of its isolation. Now, those efforts have suffered a major setback. 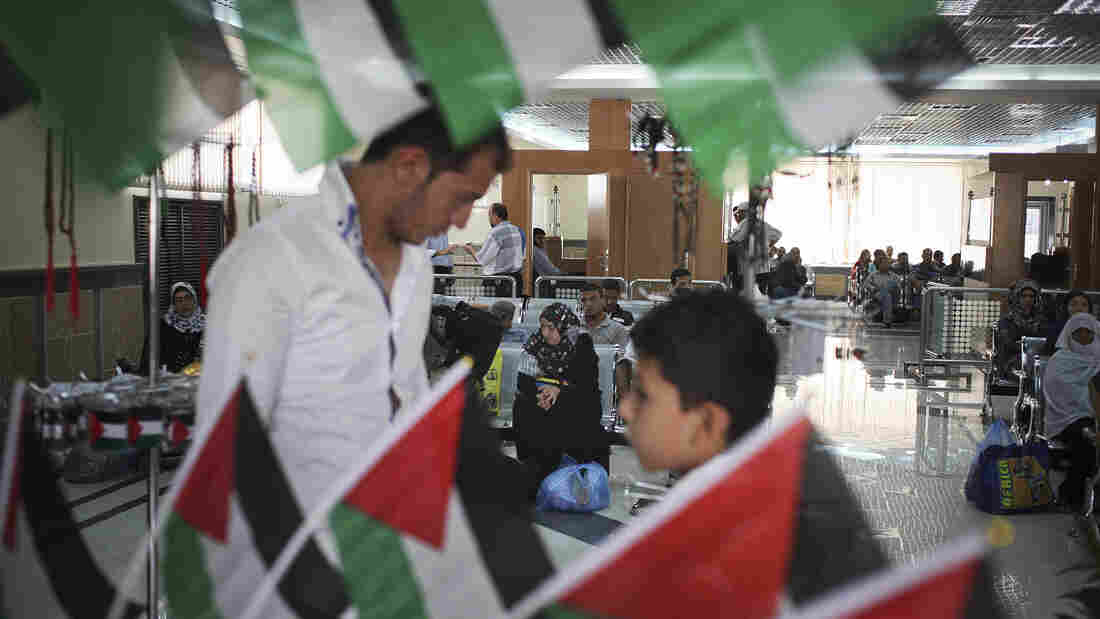 Palestinians look at items in a gift shop as they wait to cross into Egypt at the Rafah border crossing in the Gaza Strip last month. Egypt shut down the crossing less than a week later, after a deadly attack near Rafah left 16 Egyptian soldiers dead. Tara Todras-Whitehill for NPR hide caption

In Gaza, the departures hall at the Rafah border crossing between the Palestinian territory and Egypt is brand new, air conditioned and festooned with Palestinian flags.

Only a few days ago, uniformed border guards called out the names of those approved to leave Gaza.

The improved land crossing from Gaza into Egypt was the centerpiece of what Hamas hoped would be an expanded relationship between the two neighbors.

Gaza resident Ibrahim — he only gave one name — was leaving Gaza that day, traveling to the United Arab Emirates. He said restrictions placed on Gaza should be lifted.

"Most of the people is hoping that the things becoming better," he said. "We should be free."

But Ibrahim's aspirations and those of Hamas — the militant Islamist group that rules Gaza — have been dashed, at least temporarily.

On Sunday, an attack along the Egyptian-Israeli border near Rafah left 16 Egyptian soldiers dead. Egypt immediately closed down the crossing; both Egypt and Israel allege that some of the attackers came from Gaza, and are pressuring Hamas to crack down on jihadist elements there.

Leaders of Hamas, which is an offshoot of Egypt's Muslim Brotherhood, had been trying to persuade Egypt's new leaders to help Gaza break out of its isolation. But those efforts have suffered a major setback as a result of the attack in the Sinai.

The Gaza Strip is one of the most isolated places in the world. Israel tightly controls the majority of the land access to the coastal territory as well as its sea and airspace.

When Hamas took over Gaza in 2007 after a brief civil war with its rival Fatah, those restrictions increased. Israel and the U.S. consider Hamas a terrorist organization responsible for suicide bombings and rocket attacks on Israeli civilians.

Egypt under Hosni Mubarak also placed travel and trade restrictions on the strip, effectively cutting off Gaza from the rest of the world.

Israel has recently eased its blockade, but Gaza still relies on smuggling through hundreds of tunnels that run under the Egyptian border.

But after Sunday's attack, Hamas closed the tunnels and bolstered security in the border area to block the movement of arms and militants.

The Argument For Closer Cooperation

Just last week, a Hamas delegation met Egypt's new president, Mohammed Morsi of the Muslim Brotherhood, in Cairo and asked Egypt to fully open its borders with Gaza to allow a regular flow of people and goods. 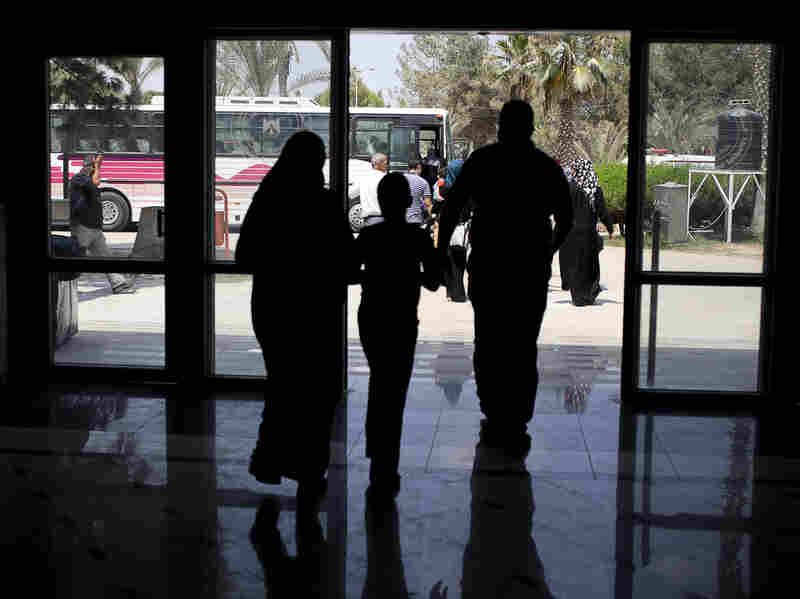 Days before Egypt shut down the Rafah border crossing, Palestinians were seen leaving the terminal to get on buses that would take them to Egypt. Tara Todras-Whitehill for NPR hide caption 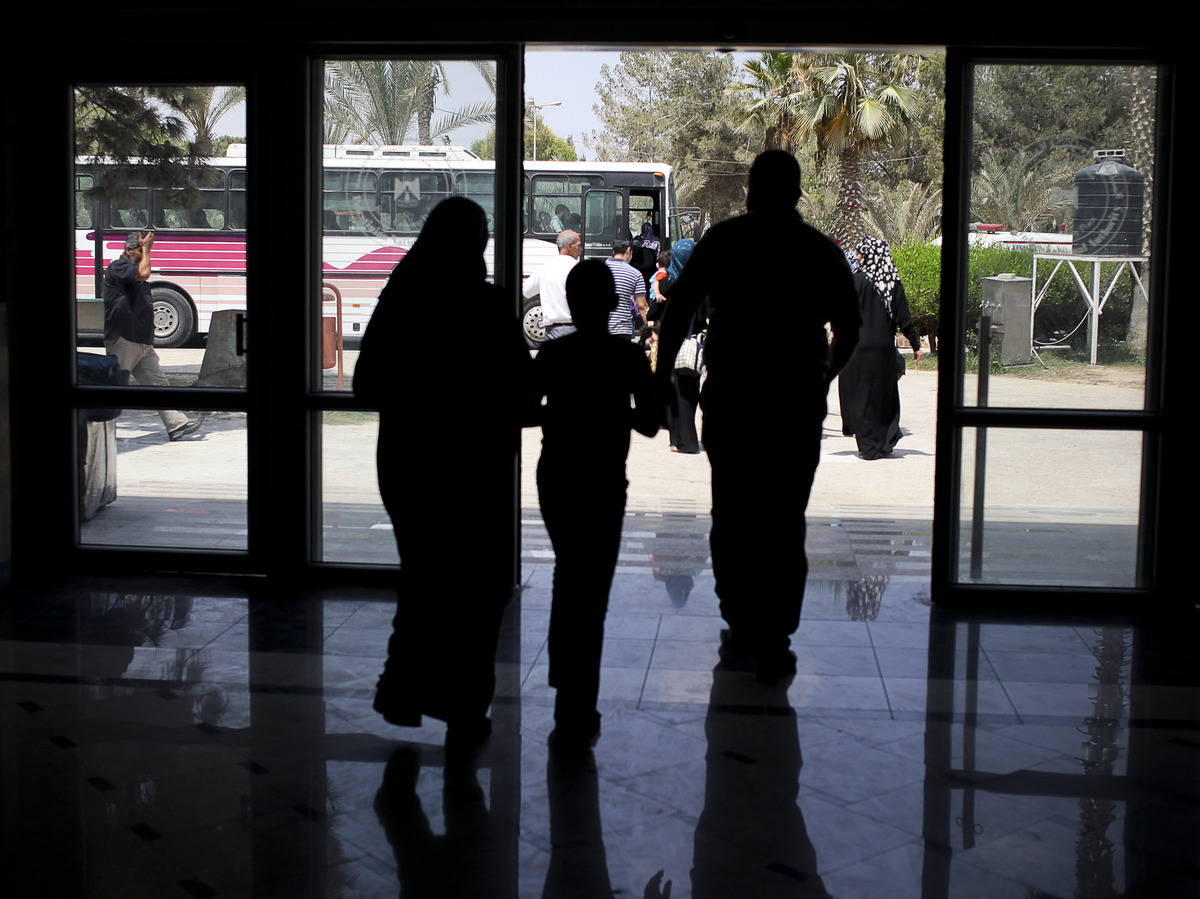 Days before Egypt shut down the Rafah border crossing, Palestinians were seen leaving the terminal to get on buses that would take them to Egypt.

Hamas official Mahmoud Zahar says the talks were "constructive" and "important." He says access to Egypt is vital because Israel allows only a tiny fraction of Gazans to leave the territory via the Jewish state.

Hamas also wants to establish a free trade zone with Egypt. Now, Gaza can import goods from both Israel and Egypt, but the economy is stymied by Israeli restrictions on its exports, mostly to the West Bank.

"A new policy and a new relation will be held, inshallah," he says.

It's a plan that some in Israel actually support. Dan Harel, the former head of the Israeli army's southern command, is among them.

"We should disengage entirely from the Gaza Strip," he says.

Harel says he would like Israel to stop providing Gaza with gas and other supplies, and let it get what it needs from Egypt.

"I think that we should declare them an enemy country and cut all connections that we have with them," he says.

But Palestinian Authority Prime Minister Salam Fayyad says that would threaten hopes for a two-state solution to the Israeli-Palestinian conflict.

"It is to me quite obvious that we will not be able to have that state which we have been looking for without Gaza," he says. "So the notion that Gaza Strip would do things with Egypt is something that is not in the direction we would like to see."

After this latest border incident, though, it's unlikely that Egypt will make any moves to change the status quo.

Omar Shaban, a Gaza-based independent economist, says Hamas will have to readjust its expectations.

"They should not expect something from Egypt," he says. "Morsi, as a president of Egypt, knows much better than others that he cannot do that."

And that leaves Gaza without the champion it was looking for.