Accessibility links
Security Breach Tests Egypt's New President A deadly assault on an Egyptian border post is proving to be the biggest challenge to face Egypt's new leader so far. Mohammed Morsi is now struggling to assure an exhausted nation that he can provide security as well as basic services. But he needs the support of the military, his biggest rival. 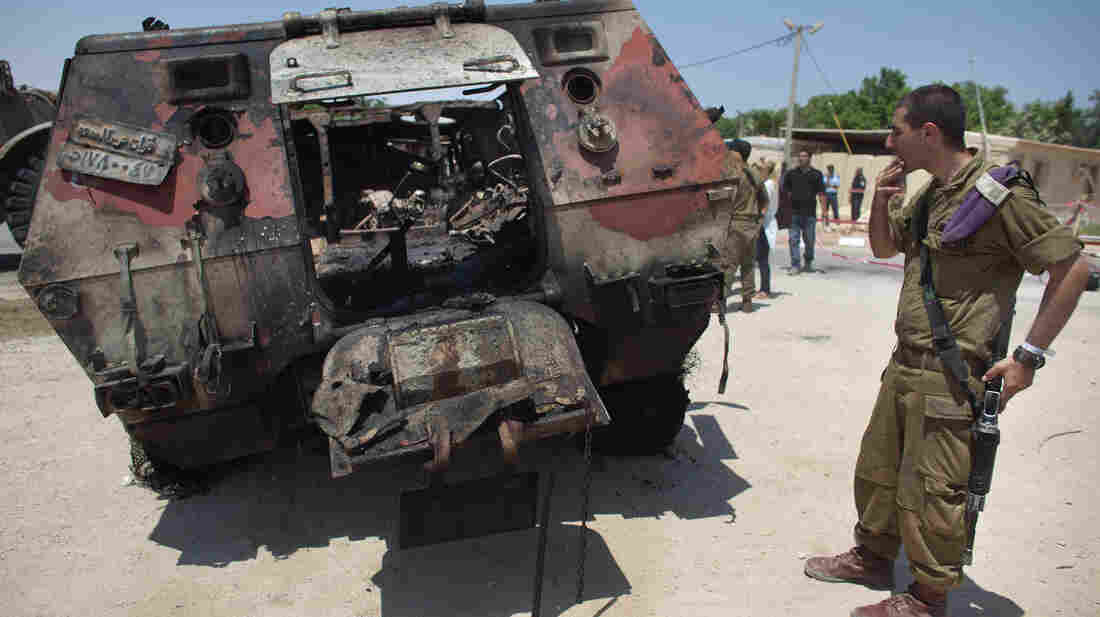 Militants drove two armored vehicles through a security fence into Israel from Egypt on Sunday, leaving 16 Egyptian soldiers dead and destroying two armored vehicles. An Israeli soldier inspects the wreckage of one of the Egyptian military trucks at a base in Kerem Shalom, Israel. Uriel Sinai/Getty Images hide caption 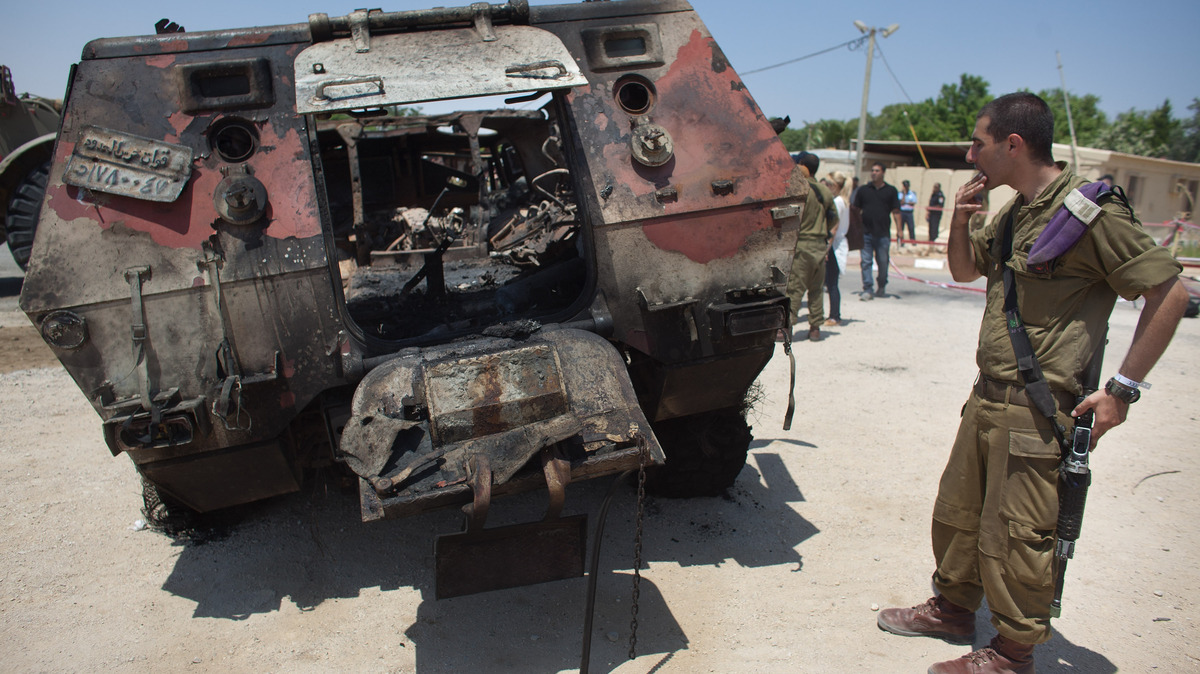 Militants drove two armored vehicles through a security fence into Israel from Egypt on Sunday, leaving 16 Egyptian soldiers dead and destroying two armored vehicles. An Israeli soldier inspects the wreckage of one of the Egyptian military trucks at a base in Kerem Shalom, Israel.

The bodies of 16 slain Egyptian soldiers are being prepared for burial, a day after 35 gunmen ambushed their border post in the Sinai Peninsula. The incident in northern Sinai is proving to be the biggest challenge for Egyptian President Mohammed Morsi since he assumed office about a month ago.

As soldiers near the Israeli border gathered late Sunday to break their fast during this holy month of Ramadan, masked gunmen attacked, commandeered two armored vehicles and drove them to the border crossing with Israel. Both cars were destroyed as they crossed into the country, and Israeli officials say its forces killed eight gunmen.

The incident came at a delicate moment for Morsi, a member of the once-repressed Muslim Brotherhood, who must now assure an exhausted nation that he can provide security as well as basic services after the turmoil of last year's uprising.

But Morsi can't do it alone. The linchpin is also his biggest rival: Egypt's powerful military council. 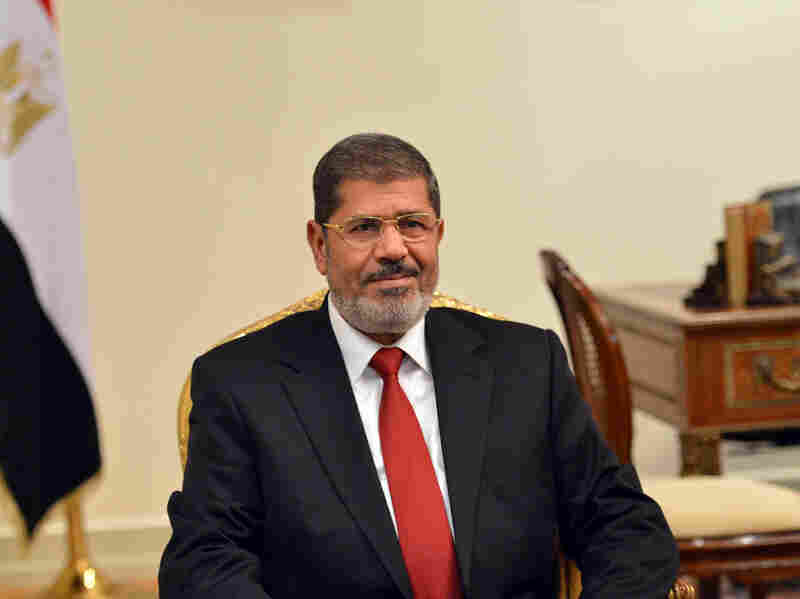 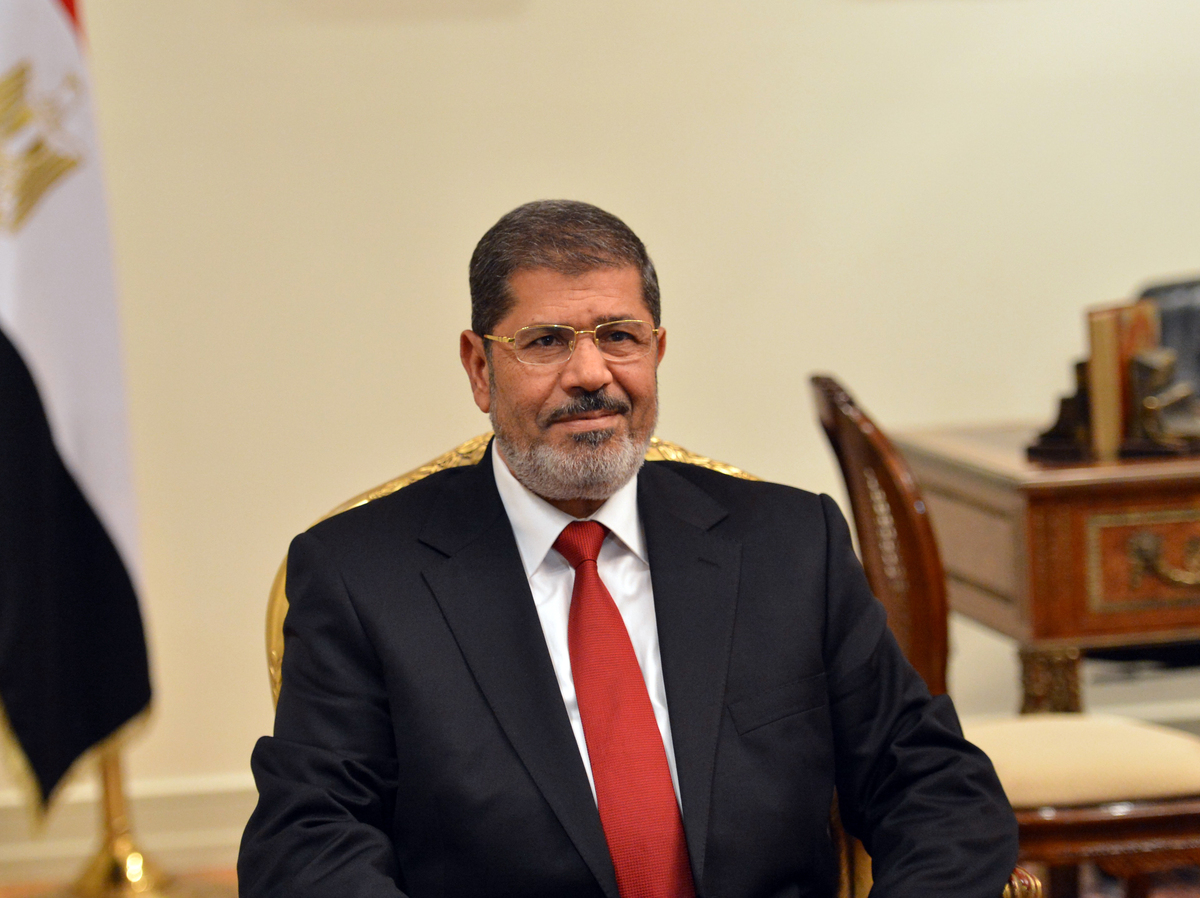 In recent days, Morsi has repeatedly praised the military on national TV, and since the attack he made it clear in statements that he is working closely with the leadership of the armed forces. Morsi and Egypt's top general, Mohammed Hussein Tantawi, flew to northern Sinai together Monday to deal with the security breach.

It's the latest sign of the changing relationship between Egypt's new president and the military leaders who ruled the country after the fall of Hosni Mubarak. In the past 18 months, Morsi and the Muslim Brotherhood's relationship with the military has morphed from ally to enemy to ally again.

"He knows they can make his life miserable," says Al-Ahram newspaper editor Hani Shukrallah. "They can withhold security, just take the police off the streets."

He says that Morsi is unwilling to assert his authority against the generals because he needs them. After all, they still hold most of the reins of power.

"[Morsi] is willing to give concessions to the military, while at the same time pushing for as much Muslim Brotherhood stake and influence over the state, over the political system, as he can get," Shukrallah says.

The council retains veto power over all government decisions and the still-unwritten constitution.

Some in the Muslim Brotherhood like Dina Zakaria accuse the military council of trying to ensure that Morsi does not succeed.

"They were just putting obstacles in front of him, and we know that they will try to make him fail all the time," she says.

In Rafah, near the Egyptian-Israeli border, Bakr Mohammed was within earshot of the fighting Sunday. Like so many residents of these border villages, he's angry at the military and the new president. He says Islamist militants have been roaming the area for months with no intervention by the security forces.

"The situation is too dangerous because there is no security at all here in north Sinai," he says. "What we see last night, I think, is just the beginning."

Mohammed says the military has done nothing to secure Sinai despite the local tribes begging for help. He doesn't have much faith in Morsi. He says the new president is ineffective, weak and subservient to a military that so far has failed to act.