Accessibility links
Pakistan Blackouts Power Frustration At Government The country's government says it can't afford to keep up with increasing electricity demand, as more and more people crowd into urban centers. But discontent over blackouts has some workers agitating for a return to military rule. 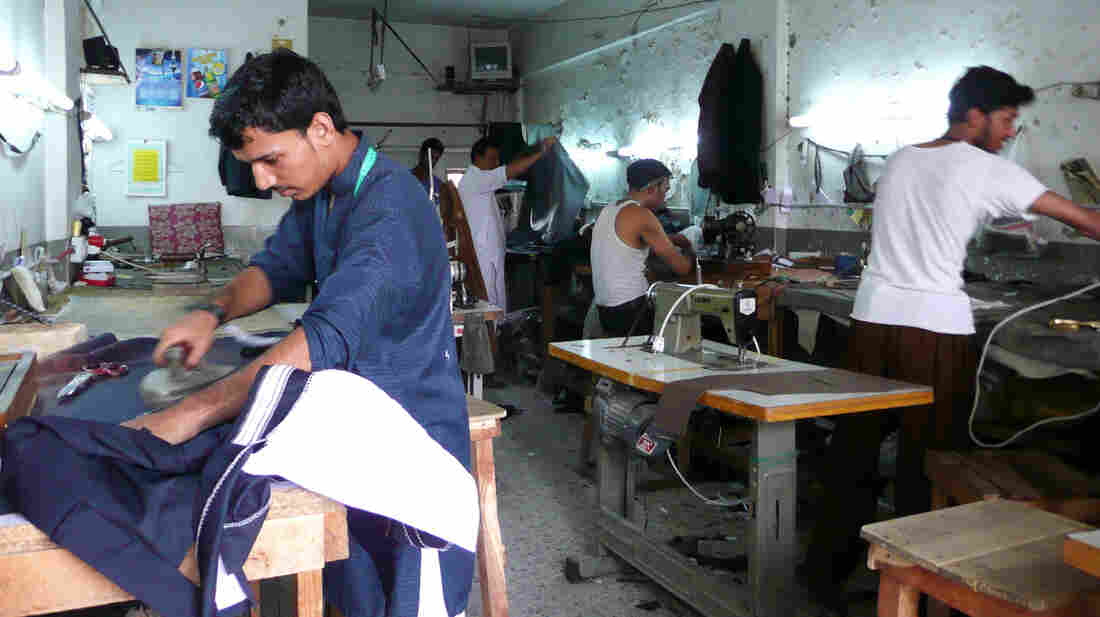 Workers in a tailor's workshop in Rawalpindi, Pakistan, use manual sewing machines, and sometimes stitch suits by hand, when the power goes out. Tailors are frantically trying to fill orders for new suits in time for the end of Ramadan. Lauren Frayer for NPR hide caption

In India last week, surprise grid failures plunged more than half the country into darkness. But power outages in neighboring Pakistan have been intentional — the result of summertime energy rationing.

Despite billions of dollars in U.S. aid, Pakistan has been unable to keep the lights on. Now the situation is getting worse, with riots erupting over factories forced offline.

Only the mosque and a handful of shops in this commercial district in Rawalpindi, a large, bustling city alongside the capital, Islamabad, have power. Generators rumble outside the few businesses that can afford them. 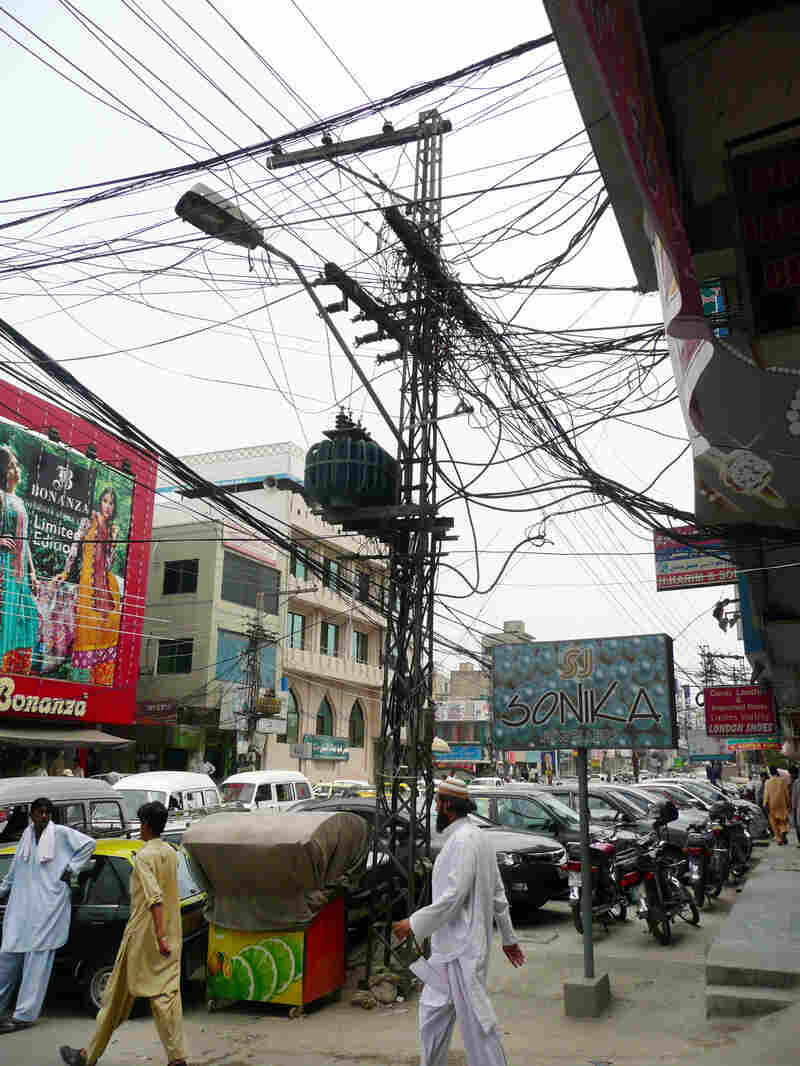 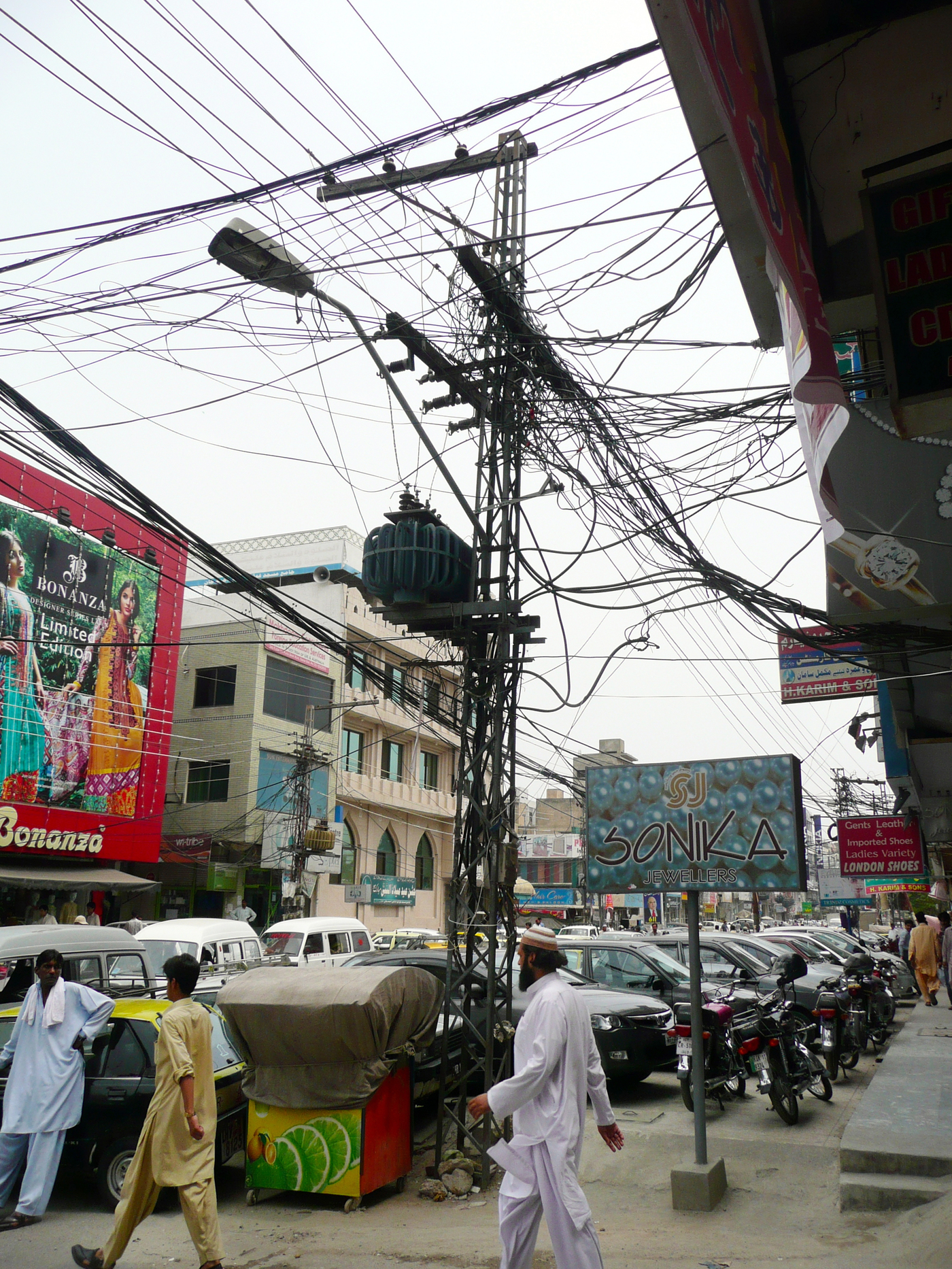 Tangled power lines in a busy shopping district in Rawalpindi.

Muhammed Iqbal, a tailor, sits sweating in his darkened shop. He's got hundreds of orders for new clothes due by the end of the Muslim holy month of Ramadan, but power outages mean he can only run the sewing machines a few hours a day.

"Earlier, the customers would come to us, and say, 'I want this dress to be ready in the evening.' But now, even in four days, we are not sure whether a dress would be prepared even in four days, because there is much load-shedding," Iqbal says in Urdu.

Pakistan's government sheds customers from the overloaded power grid — causing rolling blackouts. Most people have only a few hours of electricity a day, and even that's dwindling. Iqbal had to lay off 30 of his 60 workers.

Up a rickety metal ladder, in a sweltering windowless chamber, the remaining workers cut fabric by hand. A trainee who goes by the single name Shehzad uses an old-fashioned manual sewing machine made of wood and iron.

Shehzad halts the machine and cries out — in English — and then lapses into his mother tongue, Urdu.

"I have no money," he says. "We do not have electricity at home. When we go there we can't sleep properly, and when we come here, we can't work properly because there is load-shedding. And financially we are very disturbed, very much disturbed."

Pakistan's government says it can't afford to keep up with increasing electricity demand, as more and more people crowd into urban centers. But with nationwide rioting over blackouts, Prime Minister Raja Pervez Ashraf has promised to buy more fuel for power plants.

Opposition leaders accuse the government of spending too much on electricity subsidies — keeping prices artificially low for political gain.

Sen. Haji Mohammad Adeel leads the Awami National Party, which has threatened to pull out of the governing coalition over the blackouts.

"The minister of electricity failed badly. So I'm with the poor people of Pakistan, who due to closure of factories they are jobless, and they're facing electricity shortages," Adeel says. "Even in my house. After every one hour, there's no electricity."

As if on cue, the lights went out in his office as he spoke.

Pakistan's electricity comes mostly from a mix of thermal and hydroelectric plants. Problems have more to do with mismanagement than scarcity of resources, says local political columnist Haris Khaliq. Take natural gas, for example.

"We are self-sufficient in natural gas, but natural gas was not used to produce electricity," he says. "It was used to bake bread in the villages of Punjab, for instance. It's not efficient."

With 4 1/2 years in power, this government is on track to become the longest-serving civilian government in Pakistani history. But discontent over blackouts has some workers agitating for a return to military rule.

"If you see that the incumbent government has not delivered, then vote them out and get another government," he says. "You know, if the British government is not performing, nobody would say, 'Why doesn't the army take over' in the U.K.? I know that there is a history, but I think we should be very careful."

"We selected these people, and now this is the situation," he says. "So I don't know what type of punishment we're going through."