Accessibility links
Movie Review - 'Hope Springs' - A Marriage Passes From Routine To Rut To Therapy A couple (Meryl Streep and Tommy Lee Jones) attends a marriage retreat to see a counselor (Steve Carell) in Hope Springs. Critic Ian Buckwalter says this low-key romantic comedy lets scenes linger, allowing the actors to shine and the hard work of a long marriage to come through.

A Marriage Passes From Routine To Rut To Therapy

A Marriage Passes From Routine To Rut To Therapy 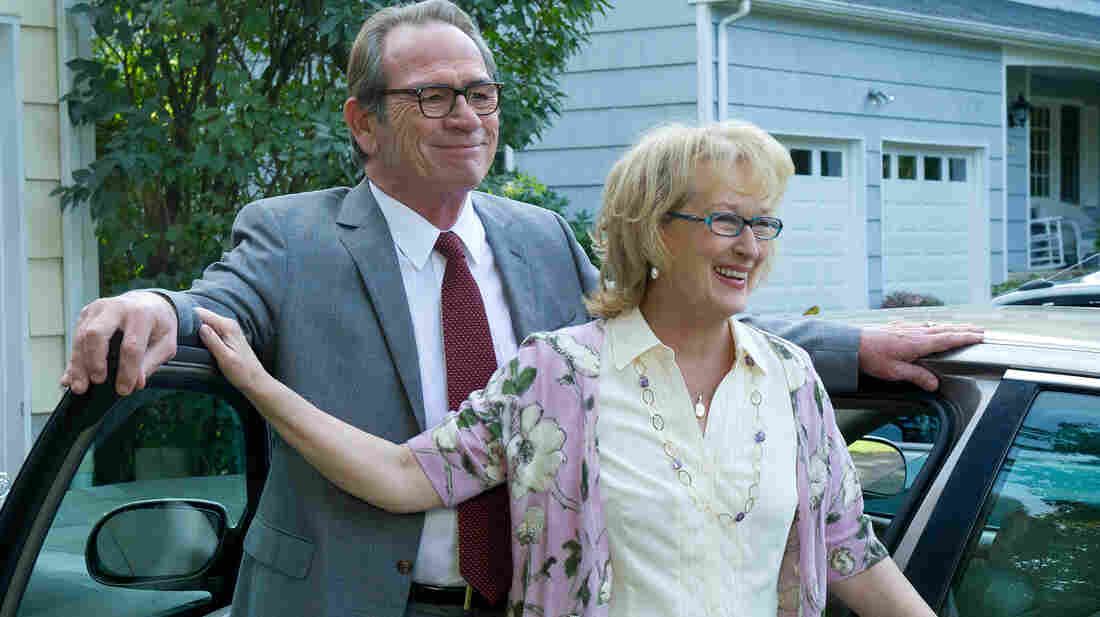 From 'Hope Springs' - 'The Next Step'

From Hope Springs' - 'The First Time'

The act of sharing decades of your life with one person lends itself to repetition. If you aren't careful, repetition becomes routine, routines become ruts, and then, for the terminally uncommunicative, ruts dig themselves so deep that they become the sort of soul-sucking bottomless trench in which Kay and Arnold, the married couple played by Meryl Streep and Tommy Lee Jones in Hope Springs, find themselves.

At least, that's where Kay finds herself, sleeping alone in the master bedroom while Arnold bunks in the guest room. When she makes a meek pass at him to open the film, he's largely oblivious ("Something wrong with your room?"), then full of stammering excuses when he does realize she wants to share a bed and upset a dull status quo that's sufficient for him, but crushing for her. After 31 years of marriage — a statistic that the curmudgeonly Arnold throws out compulsively, as if a single number can represent the health of a relationship just as definitively as a round of golf — Kay needs something to change. So she drops $4,000 on some intensive couples therapy and drags her miserly husband grumbling and scowling off to Maine for a week with self-help author and marriage counselor Dr. Bernard Feld (Steve Carell).

At first glance, the film seems like it could be an alternate spin on 2009's It's Complicated, a pat late-middle-age rom-com also starring Streep as a woman essentially trying to rekindle a long dead marriage. I spent the first third of Hope Springs expecting the zany plot twist, waiting for the film's buds of broad comedy to bloom into full-blown antics designed to push Kay and Arnold back together through unlikely circumstances.

That's why what followed came as such a pleasant surprise: Vanessa Taylor's screenplay is largely a subdued and thoughtful piece, a no-frills look at scenes from this marriage. Here's a couple working through the real and relatable problems of two people who have spent three decades slowly learning to take each other for granted. It's easy to imagine Hope Springs as a sparse chamber piece for the theater, particularly during the couple's conversations with Dr. Feld, which take their time and go on longer than any standard romantic comedy would allow. 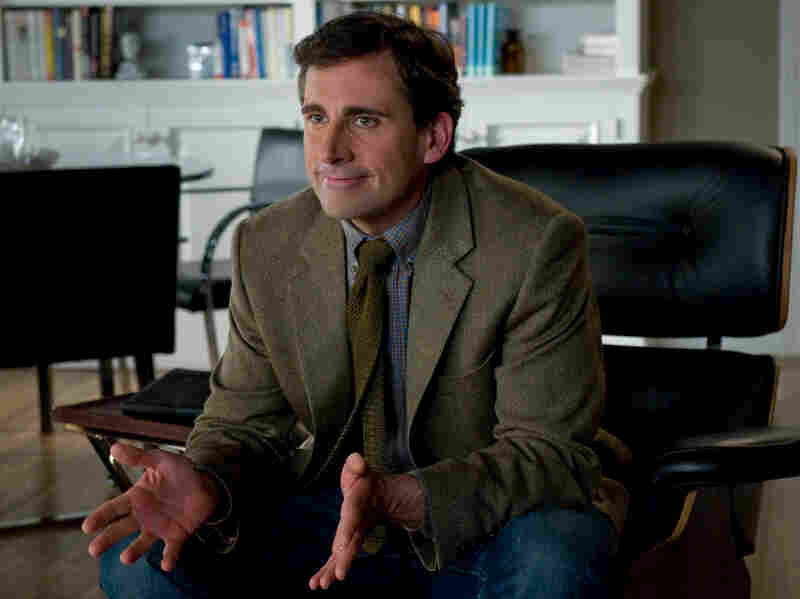 Steve Carell plays Dr. Bernard Feld, Kay and Arnold's marriage counselor. The therapy scenes between the three go on for longer than expected and play like chamber pieces for the theater. Barry Wetcher/Sony Pictures hide caption 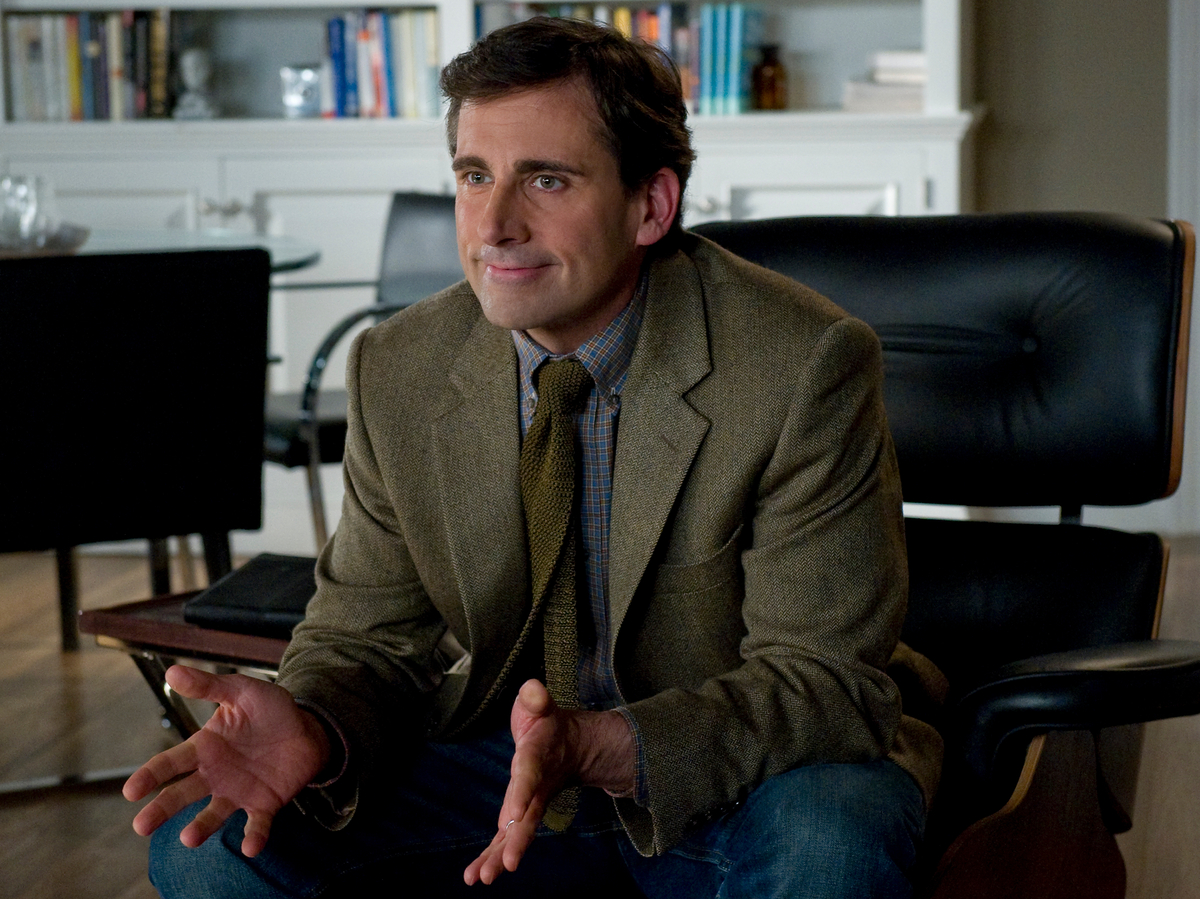 Steve Carell plays Dr. Bernard Feld, Kay and Arnold's marriage counselor. The therapy scenes between the three go on for longer than expected and play like chamber pieces for the theater.

The patience to let scenes like these play out serves director David Frankel well, especially given the acting talent he's assembled. Streep is dependably excellent here, portraying a woman who has spent years bottling up her emotions. An explosion is inevitable, yet Streep never overplays it; Kay is never able to let herself go completely, which is also one of the issues in her marriage. Jones, meanwhile, is given much of the early comic relief as the stock grumpy old man, but manages to find the pathos far beneath Arnold's gruff exterior. When he has breakthroughs, they feel earned; when he backslides, it feels inevitable. Presiding over everything is Carell, who never hams it up as Dr. Feld, a vision of Zen calm with a beatific grin and a voice so soothing it's like auditory Xanax.

Where the film trips up is Frankel's insistence on playing the comic moments a little too broadly, usually centered on Kay and Arnold's fumbling attempts to reignite their sex life. One scene where Kay and Arnold attempt public affection goes for slapstick yet it feels out of place, as awkward in the film as the pair are with each other. Subtle moments fit best with the overall tone, like an exercise in which Feld instructs them to simply hold each another: They tentatively put their arms around one another, leaving a large gap between them, like adolescents at a Catholic school dance forced to leave enough space for a balloon for chastity's sake.

The stabs at conventional rom-com antics, along with the overly manipulative soundtrack — Annie Lennox's "Why" backing one particularly awful montage is so nakedly on the nose that the characters might as well be singing along — undermine the film's potential, but never quite sink it. Romantic comedies are as prone to falling into ruts as marriages; Kay and Arnold go to Dr. Feld to save them from theirs, and Frankel relies on his actors to pull him out of his.