Accessibility links
A Comics Crusader Takes On The Digital Future Comic-book writer Mark Waid is legendary among comics fans. But after a long career on paper, he's launched a digital line of comics, hoping to reach fans on smartphones and e-readers. But some store owners are worried that digital comics will mean the end of their business. 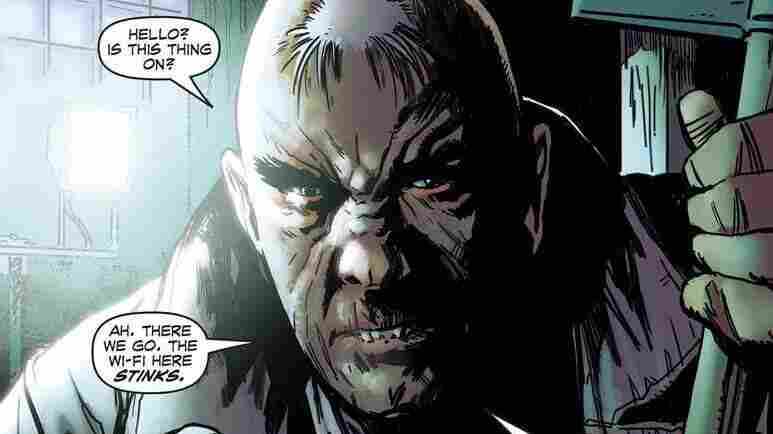 A panel from part one of Insufferable, the first title offered by the comics website Thrillbent.com. The site's creator, comic-book writer Mark Waid, hopes it will redefine comics in the era of smartphones and tablets. Courtesy of Thrillbent.com hide caption

He wouldn't make the claim himself, but when it comes to comic-book writers, Mark Waid is one of the greats.

"I've pretty much hit all of the pop culture bases," Waid says, surrounded by comic-book memorabilia in his Los Angeles home. Batman, Spider-Man and even The Incredibles have all had adventures dreamed up by Waid.

"Jan. 26, 1979, was the most important day of my life," Waid says. "Because that's the day that I saw Superman: The Movie. I came out of it knowing that no matter what the rest of my life was going to be like, it had to involve Superman somehow."

Waid's writing made the DC Comics' miniseries Kingdom Come into one of the definitive Superman stories — the ultimate "what if" tale.

"What happens when Superman retires and the next generation of heroes come along and make a mess of things, and Superman has to come back and set the world straight?" Waid says.

"You know," he laughs, "that is kinda what I'm doing right now."

That's because Waid has begun remaking comics for iPads and similar gizmos — crafting stories that use simpler pictures and bigger text that read well on screens of any size. And he's found new storytelling tricks, like captions that shift over a static piece of art.

I got news for you: I've been doing this for 25 years, and this is the hardest writing I've ever had to do.

"That doesn't change the image, but it completely changes the context of what the story is," Waid explains.

Take the comic Waid wrote for Marvel's new Infinite Comics line, designed specifically for the digital format. In it, a hero hurtles through space, a red-orange blur behind him.

But when the reader swipes the screen, the page doesn't turn — instead, the image shifts focus. The blur becomes the fiery cosmic Phoenix, the X-Men's most deadly foe.

"I got news for you: I've been doing this for 25 years, and this is the hardest writing I've ever had to do," Waid says.

Others have tried adapting comics from print to digital form, but it hasn't been easy. One attempt, a hybrid cartoon/comic called Motion Comics, failed to really take off.

"Because what makes comics ... is that you are in control of the pace at which you absorb the story," Waid says. "It's a relationship between you and the page."

So far, the biggest hits have been apps from a company called Comixology. These put issues of paper comics directly onto phones and tablets. They're good, but not perfect, Waid says. He likens it to what happened when movies went to VHS and were hacked to fit TV screens.

"That seemed unacceptable to me," he says. "[It] seemed to me that the smart money is to go the reverse and create things specifically for a digital medium."

Taking A Risk On A Digital Future

Amid Slack Sales, The Comics Industry Once Again Tightens Its Utility Belt

And Waid is betting the Kent family farm on it. He's selling off his personal collection — 40 years' worth of comics — to fund his new venture, Thrillbent.com. There, he hopes to build an audience by giving away the work for free.

If he can find a way to make Thrillbent pay, Waid will take that cash and then make print collections of the stories for stores.

"And hope that enough store owners haven't hung me in effigy in the meantime, where there's not a market for that stuff," Waid says.

Robert Hennessey is one of those store owners Waid wants to keep the peace with. Hennessey dreads the end of print comics, when stores like his are no longer the center of the comic-book universe.

"OK, here's my fear," Hennessey says. "That what happens is that we get comics out there digitally, and that they become either free or so nearly free that it starts to cannibalize the audience for print comics."

But some see that change as inevitable.

"The weekly superhero comic is not long for this world," says Glen Weldon, a critic and contributor to NPR's Monkey See blog. "The other thing to keep in mind is that it's really surprising how ... easy it is to get comics nowadays digitally."

But that doesn't mean they're selling. In June, Comixology revealed they had pulled in $19 million in sales in 2011 — less than what print comics make in a single month. The company's projections for the current year put them on track to take in $70 million — a big jump that would equal about two months' take from print.

That leaves Waid with a never-ending battle: to make the digital world safe for creators, fans and the comic-book way.

Noah Nelson is a reporter for Turnstyle, a project of Youth Radio.