Accessibility links
Japan's Nuclear Debate Weighs Safety, Economics Anti-nuclear protests are growing in Japan over Tokyo's decision to restart two nuclear reactors in the wake of the March 2011 disaster at the Fukushima nuclear plant. Many Japanese fear another accident, but others say the lack of nuclear power will further hurt the ailing economy. 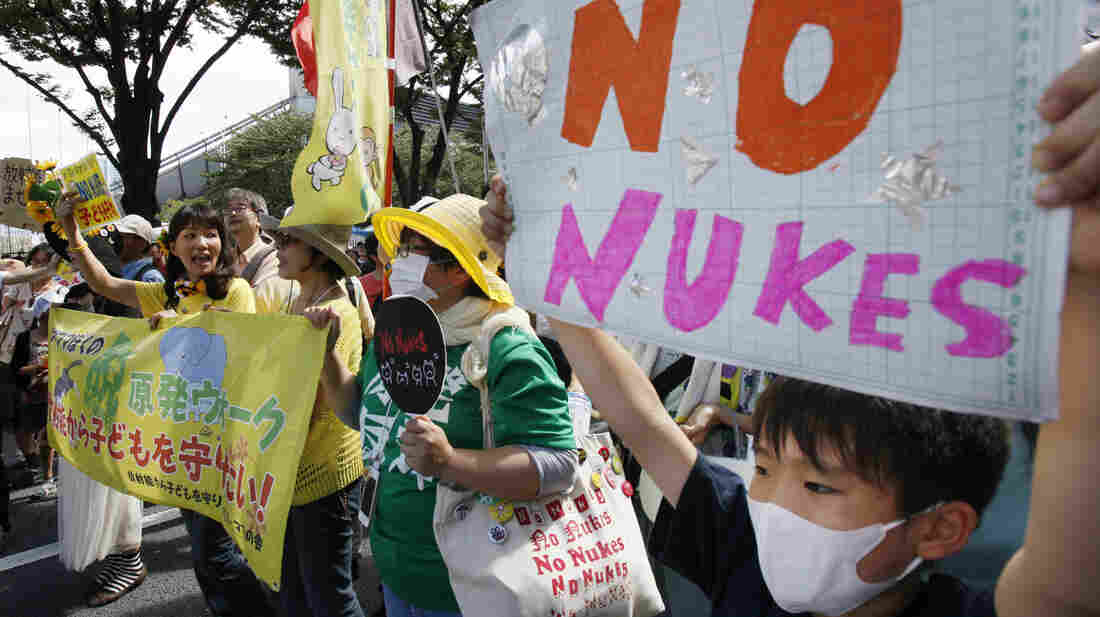 Anti-nuclear protesters carry "No nukes" banners during a march in Tokyo last month. Protests against Japan's use of nuclear power have grown in the aftermath of the March 2011 Fukushima disaster. Koji Sasahara/AP hide caption

At 6 p.m. every Friday — with the kind of precision timing the Japanese live by — the protests in downtown Tokyo begin.

Thousands of Japanese — young, old, in wheelchairs and on skateboards — shout anti-nuclear slogans from behind police barricades that snake around the office of Prime Minister Yoshihiko Noda. Over the past four months, the protests have swelled; at least 75,000 people turned out at a recent demonstration.

Nobuyuki Miyazaki, an office worker, says this is the first time he's ever been to a demonstration.

"I'm very angry, and I'm worried that the government will return to nuclear power," he says.

The scene is replayed every week, during this, Japan's summer of discontent. The Japanese government idled the country's 50 nuclear reactors because of safety concerns after the earthquake and tsunami caused reactor meltdowns at the Fukushima Dai-ichi plant on the country's northeast coast, and radiation forced the long-term evacuation of 100,000 residents.

The government and the power company, Tokyo Electric Power Co., or TEPCO, were widely viewed as having grossly mishandled the situation and not being honest about the extent of the danger. Anti-nuclear sentiment has run high in the country since. 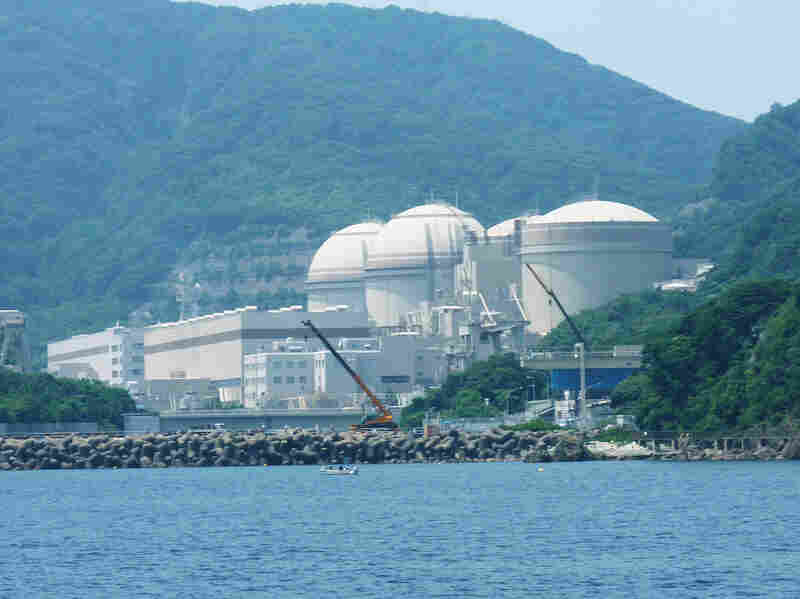 The Japanese government shut down all of the country's nuclear reactors after Fukushima. It recently restarted two of them at the power plant in Ohi (shown here on July 26), along the Sea of Japan. Jackie Northam/NPR hide caption 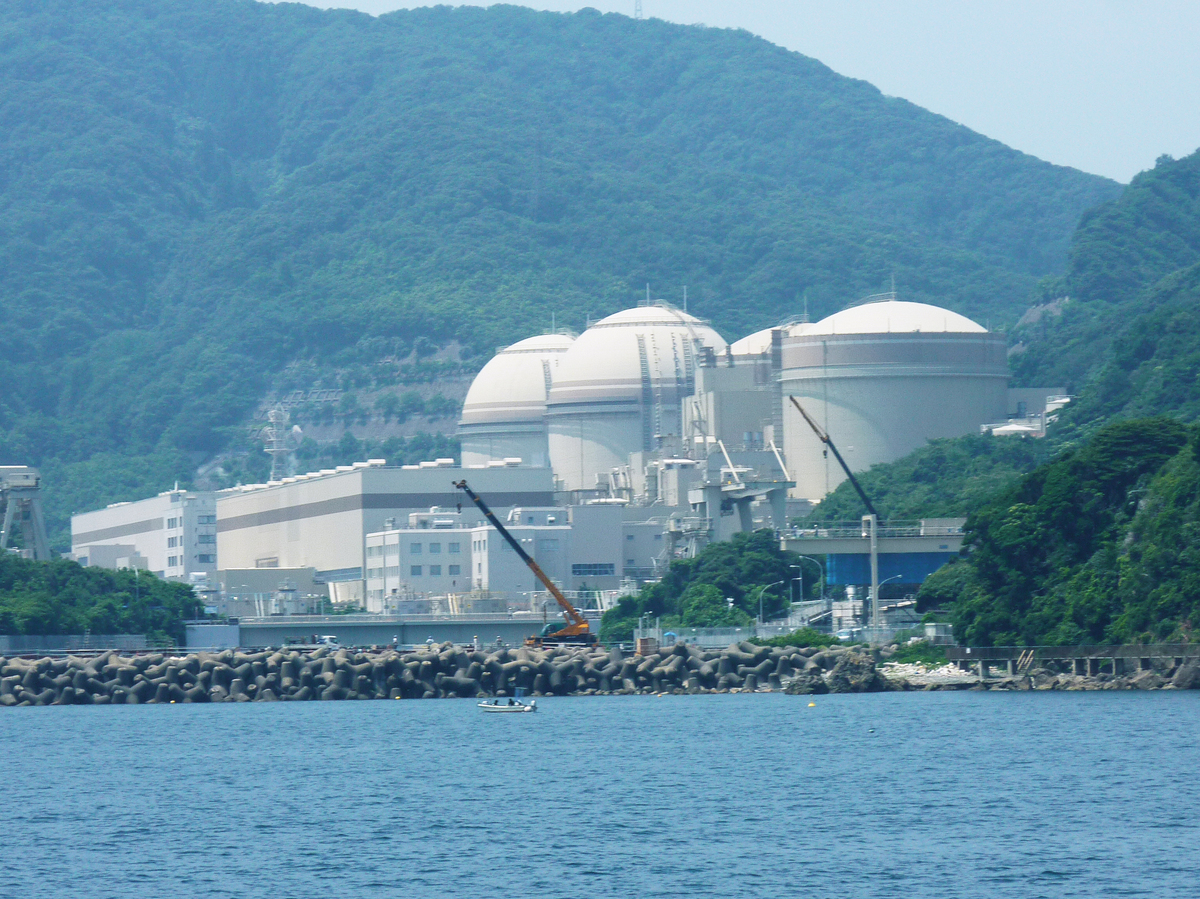 The Japanese government shut down all of the country's nuclear reactors after Fukushima. It recently restarted two of them at the power plant in Ohi (shown here on July 26), along the Sea of Japan.

Now, the government has restarted two reactors in Ohi, a town in Fukui prefecture on Japan's western coast. Yet the memories of the March 2011 disaster are still too fresh in the minds of many Japanese.

The only way to see the nuclear power plant is by boat; it's tucked away at the end of a peninsula jutting out into the Sea of Japan. From the water, the four massive reactors are visible. Last month, the government said it had completed safety checks — and restarted two of the reactors.

Back in town, the most active place in Ohi is the local grocery store, where no one seems to want to talk about nuclear power. Takumi Saruhashi, a town councilor, says people in Ohi never say anything against the town's main employer. His was the only vote against restarting the nuclear reactors. He says his neighbors are focused on the economy rather than safety.

"If another nuclear accident happens now, like the one at Fukushima Dai-ichi, everyone in Japan will blame us," Saruhashi says. "But many people will be consuming the electricity that we provide."

Before the disaster at the Fukushima Dai-ichi plant, nuclear power provided nearly 30 percent of Japan's energy. The Japanese government was worried the economy would have suffered if the two reactors at Ohi were not restarted. It's already been forced to buy natural gas, coal and other fossil fuels — at a high cost — to cover the lack of nuclear power.

"If Japan decides to stop all nuclear power, we will not have a stable and inexpensive source of electricity. The cost of everything will go up by at least 20 percent. Our economy will suffer," he says.

Noriyuki Shikata, a spokesman with the prime minister's office, says the government has no immediate plans to restart another reactor. He says it's "really tough" to balance the concerns of the public and the need for power. Shikata says it will take some time to rebuild the public's trust.

"We need to step up our efforts to be able to explain to the public the challenges that we are facing, and also especially in terms of safety. We have to keep on working on engaging the public in this arena," he says.

Masaru Kohno, a political science professor at Waseda University in Tokyo, says the Japanese people need to make a decision.

"It's not just a policy decision, but it's a moral decision, because if you create some gigantic project, and if that project was unsuccessful, that would leave a negative legacy for decades and generations to come," he says. "And this is [the] kind of issue that each citizen has to put [their] hand to [their] heart and say, 'Would I really support this or not?' "

The time has come, Kohno says, for Japan to hold a referendum on nuclear power.

The audio of this story, as did a previous Web version, incorrectly identifies the spokesman for the Nippon Keidanren as Yoshihito Iwama. The spokesman's name is Satoshi Mukuta.