Accessibility links
Tax Evaders Beware! Money's Getting Harder To Hide The U.S. government has been tightening the screws on Americans who hide money in offshore accounts, putting pressure on overseas banks, and joining forces with European and Japanese regulators. One effort, an amnesty program for unreported account holders, has brought in $5 billion in back taxes and penalties. 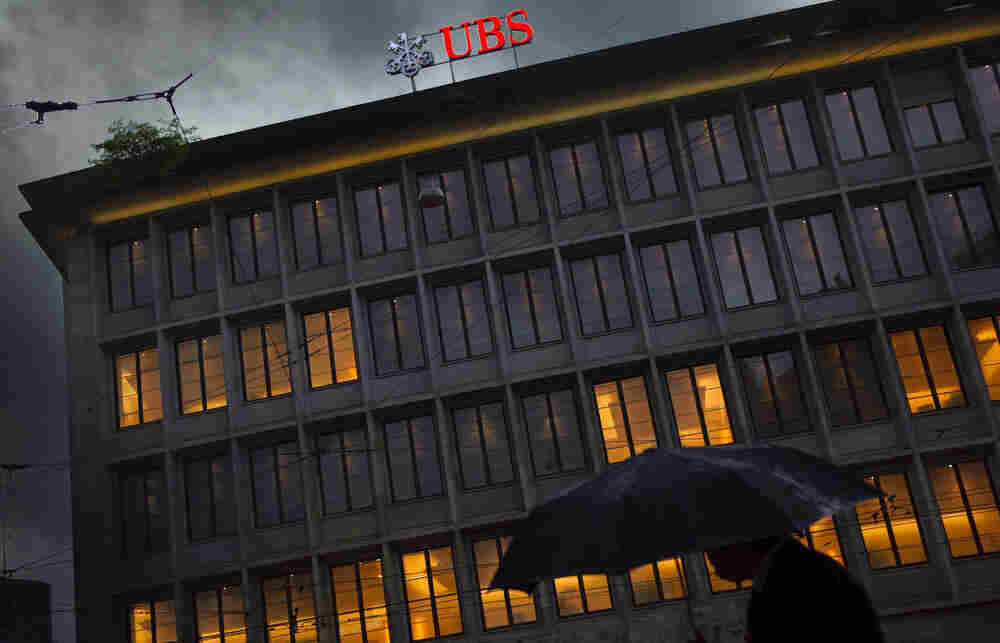 The U.S. government has been working for years to crack down on Americans dodging taxes overseas. In 2009, under intense pressure, the Swiss bank UBS released the names of its American customers. Fabrice Coffrini/AFP/Getty Images hide caption

Republican presidential candidate Mitt Romney has acknowledged that he had money in a Swiss bank account until 2010. Romney says he wasn't trying to hide the money, since he reported the account to the government.

Even so, he closed the account at a time when the federal government was in the middle of a major crackdown on offshore tax havens — a crackdown that has made it harder for Americans to hide their money overseas.

The amount of money stashed in offshore tax havens is staggering. A recent report from The Tax Justice Network estimates it's as much as $31 trillion worldwide — and that's just an educated guess.

After all, tax havens are, by their very nature, secretive.

"First of all, you don't have an offshore bank account in your own name," says Rebecca Wilkins, senior counsel for federal tax policy at Citizens for Tax Justice. American companies and individuals can hide their money by opening an account in the name of a foreign corporation, she says, making it virtually impossible for the Internal Revenue Service to find it.

"The tax havens have a history of non-cooperation with the IRS," Wilkins says. "And even if the IRS got wind of some Panama corporation, they would go to the Panamanian government and ask, 'Who owns this?' And they would get no information in return."

Finding Evaders, And Those Who Help Them

I don't think you can get the same level of privacy and protection anymore from the Swiss accounts, and this is true worldwide, really. I think the days of bank secrecy are over.

But the tide has been slowly turning in recent years. In 2007, the U.S. government received a tip that the Swiss bank UBS was helping people evade taxes. After extended negotiations, the bank ultimately had to release the names of its American customers.

The U.S. government also offered amnesty to taxpayers with unreported offshore accounts, allowing such account holders to avoid criminal prosecution by paying back taxes and a penalty. About 33,000 people have participated in the program thus far.

"I'm still getting calls from people [who want] to get involved in this program, because I think they realize the gig is up," says tax attorney Jeff Kolodny.

Many of those who have come forward defy stereotypes about the kind of person who might hold a Swiss account.

Daniel Shaviro, a tax law professor at New York University School of Law, says very rich Americans tend not to keep their money in Swiss banks. Instead, he says, they can find legal ways to avoid paying taxes.

"The people who were doing this were economically several levels below Romney," Shaviro says. "Kind of affluent people, with their own businesses, say. Cash businesses, things like that."

And as these people have stepped forward, the IRS has leveraged their cooperation to go after other people involved in hiding illicit accounts, says Citizens for Tax Justice's Rebecca Wilkins.

The IRS then goes to the account holder's tax adviser or attorney and demands that that person turn over the names of his or her other customers. The U.S. has also been working with European and Japanese regulators, who have launched crackdowns of their own.

The federal government went even further in 2010, when Congress passed the Foreign Account Tax Compliance Act, imposing taxes on overseas banks that won't name their American customers. This has extended the U.S. crackdown beyond Switzerland to tax havens in the Caribbean and Asia.

As a result, attorney Jeff Kolodny says, many overseas banks are now unwilling to accept any more American customers.

"I don't think you can get the same level of privacy and protection anymore from the Swiss accounts," Kolodny says. "And this is true worldwide, really. I think the days of bank secrecy are over."

The U.S. government's efforts at cracking down have had other benefits, as well. The amnesty program has brought in approximately $5 billion in back taxes and penalties.

That's only a small fraction of the money estimated to be in offshore accounts, of course. And there's still a vast network of financial advisers and tax attorneys around the world ready to help people who want to hide their money. Even so, the current crackdown has at least pierced the veil of secrecy that once surrounded many overseas banks — and the money Americans keep there.