Accessibility links
Building For Birds: Architects Aim For Safer Skies The eye-catching, shiny buildings that line cityscapes can be deadly for birds. Architects are experimenting with new designs that preserve the beauty — while also preserving the birds.

These collisions may seem like an intractable problem. But in New York City, an architect is trying to find a solution.

In Manhattan's Meatpacking District, there used to be more dead birds than live ones. But now the High Line starts here — it's an old elevated rail line that's been planted with trees, shrubs and flowers. Walkers, joggers and street musicians flock here. And birds.

That's what attracts architect Guy Maxwell. "I have to imagine that during migration, this is going to be pretty attractive as a stopover," he says as we walk down an aisle of green.

Maxwell is a soft-spoken guy in his 40s with salt-and-pepper hair. He designs multimillion-dollar buildings. He also builds roosts for owls in his own backyard. He loves the High Line, but he says it's also a trap. "It's a fantastic park, but it does pose some form of hazard, because it will draw birds in and bring them into these areas that are exposed to a lot of glass."

Glass-walled buildings are everywhere. I point to one right in front of us — a multistory building with lots of big glass panes. "Yeah," Maxwell says sheepishly. "That's one of our buildings. That's The Standard hotel."

The High Line runs right under it. When a bird looks at that, it sees trees and clouds reflected in the glass — as if it can fly right through it. "It's really the size of glass and reflected vegetation [that] are the two factors that really result in collisions," Maxwell explains.

Buildings like this all over the world are killing birds. Maxwell says luckily, this hotel has blinds and curtains in the windows. These break up the reflections.

But there are other hazards here. Maxwell points out a brick high-rise. There's a corner office with a big window that wraps from one side of the building, around the corner and along the adjacent side. 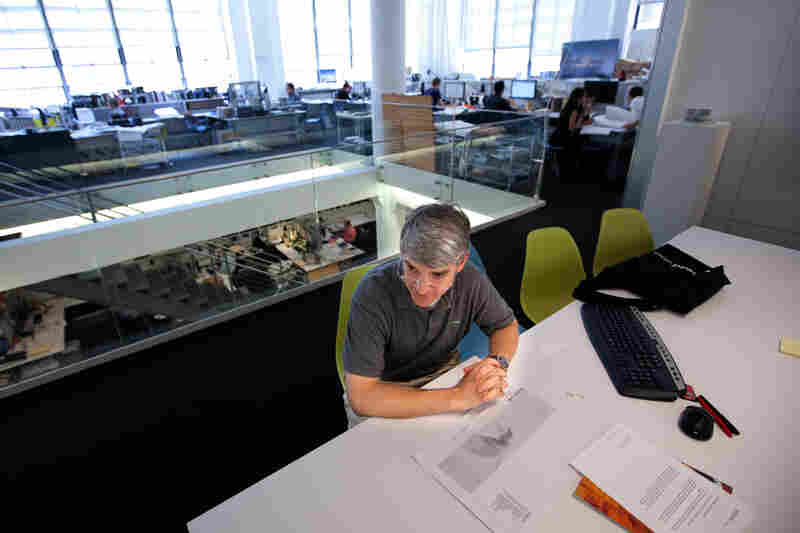 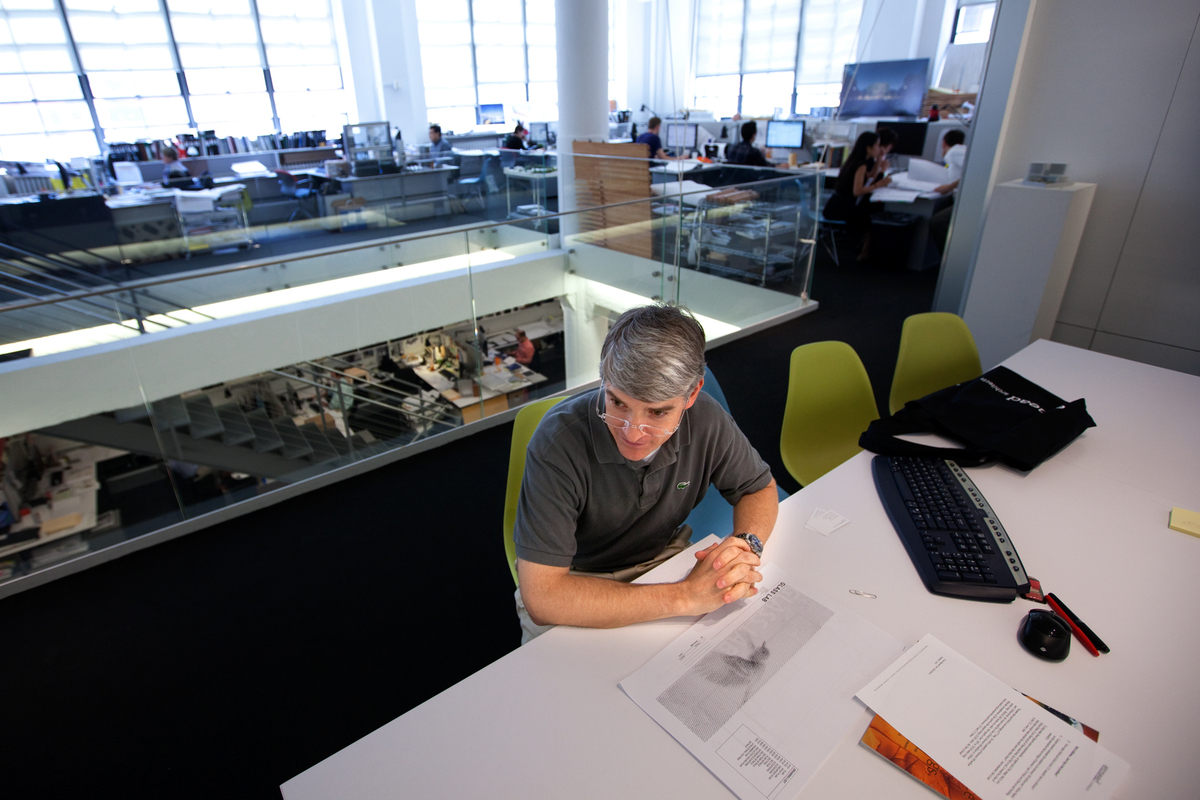 Guy Maxwell, principal at Ennead Architects, talks to a reporter in the firm's Manhattan offices.

This is more than a personal passion for Maxwell. He's decided to design bird-friendly buildings for his architectural firm in Manhattan, called Ennead.

The firm occupies an old warehouse. The windows have chicken wire in them — for safety — but it turns out that's a pretty good bird deterrent, since the birds can see the wire. But people don't want chicken-wire glass now.

So Maxwell is looking for glass that birds can see, but that also looks good to people. He's got a drawer-full of candidates. In the firm's library, he opens drawers and pulls out one small pane after another. "Ultimately," he says, "what we are after here is breaking up the reflection."

That can be stripes, dots, patterns. Or color. "I have a big question about color," Maxwell says. "How do birds see color? Is there one color they see more than others? Could I put, you know, a couple of spots of red on a building and it's like a big stop sign? Who knows?"

Biologists and architects don't really know. They have to follow their hunches and test ideas on real birds when they can.

One thing that seems to work is a "frit." A frit is a length of pencil-thin ceramic embedded in or on glass. The pattern deters birds, but only if it's set in rows no wider than two inches apart horizontally or four inches apart vertically. But frits have issues. "Vertical lines, for a lot people, makes them feel like they're in prison," Maxwell says with a laugh. "Behind bars."

But getting builders to cover their buildings in patterns is hard. Just ask Michael Mesure. "Anything that has been recommended, they have shunned away from because aesthetics is key for corporations," Mesure says.

Mesure's experience is mostly in Toronto, where he runs a group called FLAP — the Fatal Light Awareness Program. In the 1990s, they focused on getting big buildings to turn out the lights at night because they attract migrating birds. "I had to find out myself if this was really happening," he says, "and sure enough, I got up bright and early one morning, went down into the city and was finding birds on the sidewalk."

Dead birds. Lots of them. Toronto sits next to Lake Ontario, a hotspot for migrating birds.

But Mesure discovered that daytime reflections are worse than lights at night. So his group worked with Toronto officials to require bird-friendly designs for new buildings. But old buildings aren't included.

So FLAP is helping an environmental group, Ecojustice, to sue building owners to make them retrofit their buildings. The lawsuit claims that reflected light is a contaminant. "Once daylight is reflected off a surface, it's reflected in the form of radiation," Mesure explains. Under Canadian law, radiation is listed as a contaminant that can harm animals.

Mesure acknowledges that this argument is a stretch. But other cities are voluntarily adopting guidelines for bird-friendly buildings, including San Francisco. Some, like New York, encourage building owners to turn off their lights at night.

'The Closest Thing To That Miracle Glass'

But what designs really work? New York architect Guy Maxwell is trying some out at Vassar College, in Poughkeepsie, N.Y. He's going to test them on a new science building that will go up there, next to a stream in the woods, "right in the middle of an area where we know there will be birds flying, so we had to do something about it," he says. 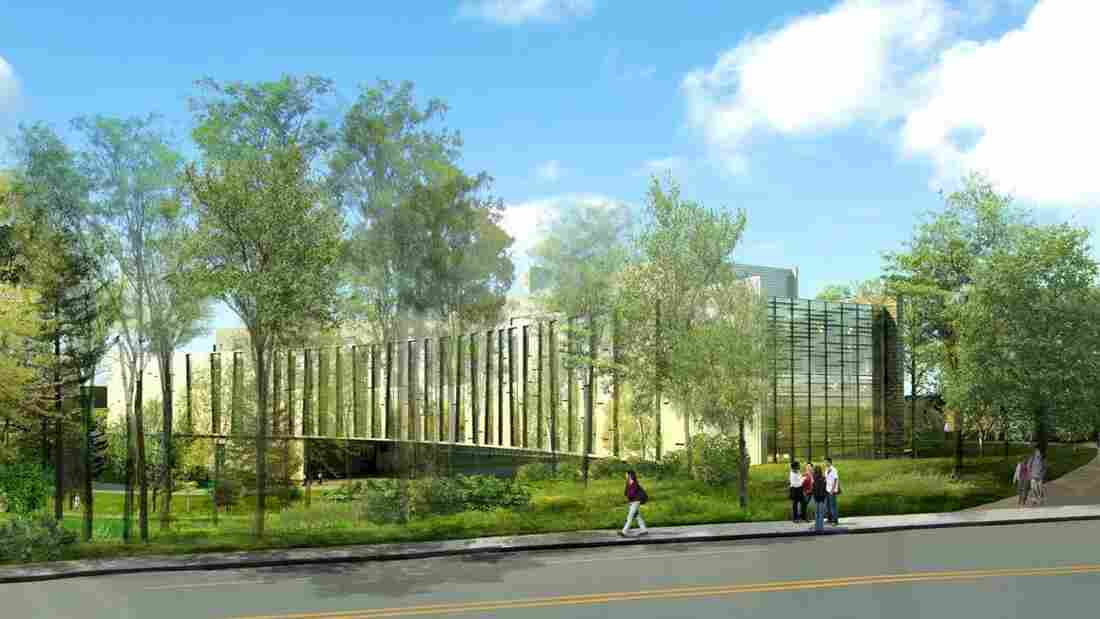 This illustration shows a planned building at Vassar, which will be built into a wooded area, and will use special Ornilux Mikado glass that reflects UV light visible to birds. Ennead Architects hide caption

The project got the backing of Marianne Begemann, Vassar's dean of strategic planning. "People understood that this was a way that we can try something new," she says as we visit the construction site. "And we also know from experience what some of our other buildings do. So people see dead birds, you know, outside of existing buildings."

To prove her point, we go up into the building next to the construction site. Maxwell draws the curtains from a picture window. "Hopefully we won't find any birds on the other side of the glass," he says, "but it wouldn't surprise me if we did."

He peers cautiously out the window. "Oh no, that looks like a vireo." It's a dead songbird on the ledge outside. There's a ghostly outline of a feather on the glass where it hit.

The Vassar building will use glass with various frit designs, those thin ceramic bars. Outside one glass wall they'll also build a row of tall metal louvers, like vertical venetian blinds. That should break up tree reflections.

And they'll try something called Ornilux Mikado glass, which is made in Germany. A chaotic pattern of lines is painted inside the glass — "mikado" is the German name for the game of pickup sticks.

Outside of a trailer with Ornilux windows, you can make out a faint pattern. But from the inside looking out, it is perfectly invisible.

Maxwell smiles as if I'd just told him his newborn baby was beautiful. "Yeah. It's good. It's really good. It's the closest thing we have right now to that miracle glass."

Not a miracle, really, just physics and biology. The pattern is painted in a substance that reflects ultraviolet light. Birds see UV light well — we don't.

A lot of this is hit or miss. There's not much money around to do the research, but Maxwell doesn't do this to make a lot of money. I ask him if he feels a sense of responsibility because he's an architect.

"Absolutely," he says. "The notion that a building that we've built is causing harm is really troubling to me."

Maxwell shows me his phone. It's got a library of bird songs. He finds the vireo, the bird whose body he found on the ledge today. He pushes the play button and fills the air with birdsong.