Accessibility links
Uncovering Secrets Buried At A Neglected Cemetery Lincoln Cemetery in Montgomery, Ala., was established in 1907 for African-Americans. But with no one in charge of the cemetery or keeping burial records, abuse, vandalism and neglect became rampant. And no one is sure where people are actually buried. Recently, volunteers began cleaning up and documenting the graves. 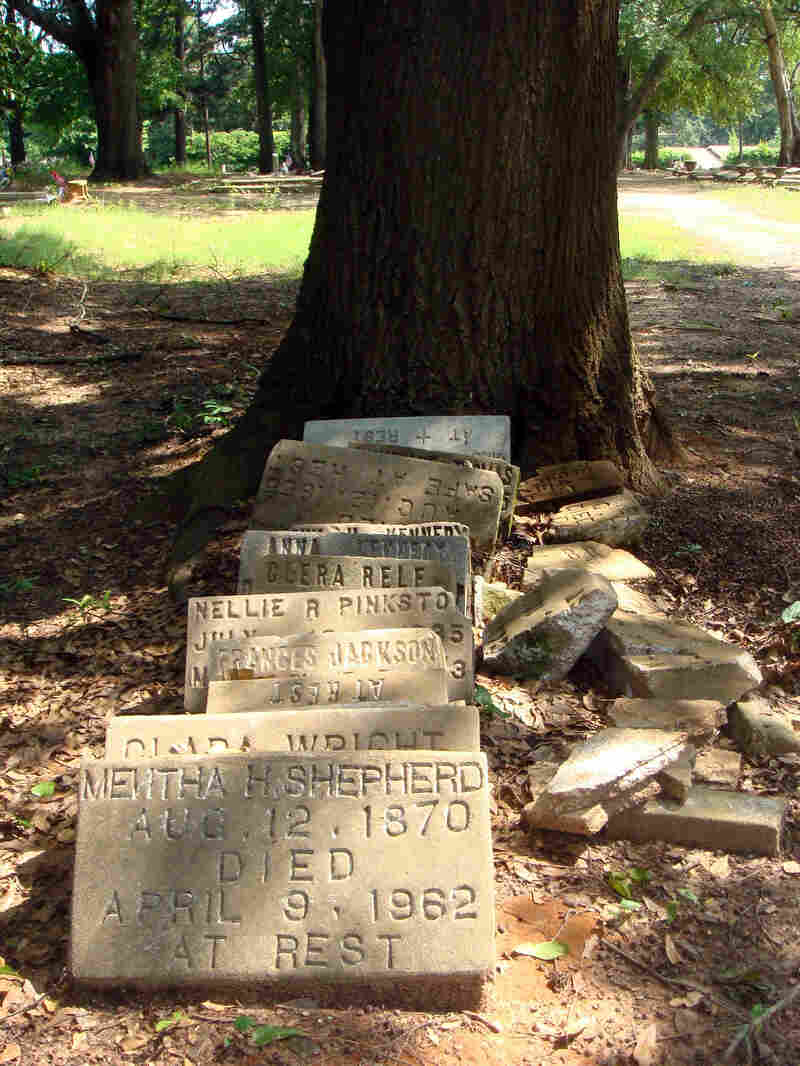 Volunteers have been collecting grave markers like these and trying to figure out where they go. Maggie Martin/NPR hide caption 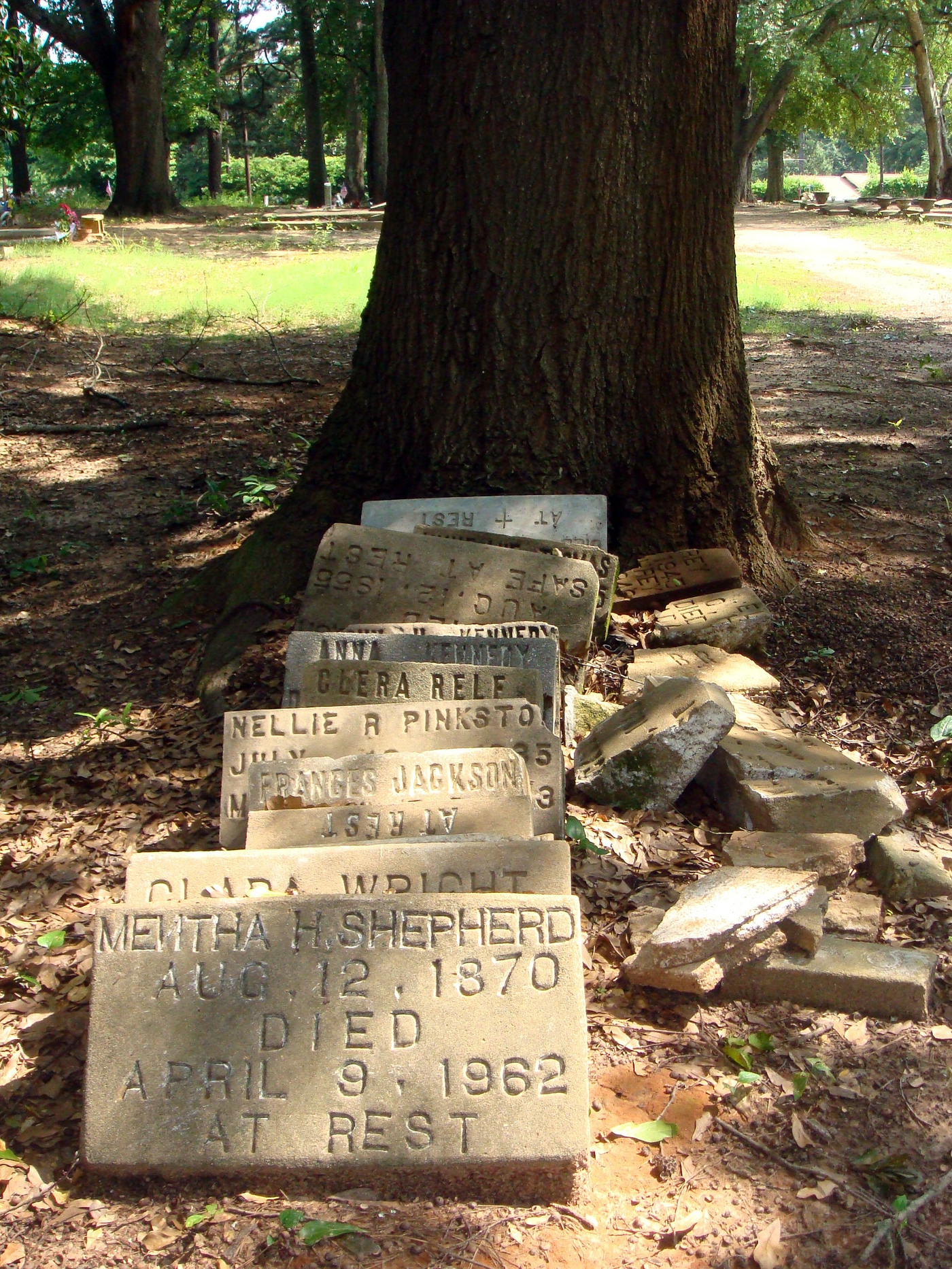 Volunteers have been collecting grave markers like these and trying to figure out where they go.

At most cemeteries, hearing weed cutters and lawn mowers trimming grass around graves would seem normal enough. But at Lincoln Cemetery in Montgomery, Ala., these are the sounds of progress.

Lincoln Cemetery was established in 1907 for African-Americans. But with no one in charge of the cemetery or keeping up with burial records, abuse, vandalism and neglect became rampant and the cemetery is in disrepair. Grass and weeds grew three feet high. People picked apart old, crumbling graves and took bones of the deceased.

And no one is quite where people are actually buried.

"When somebody would be buried here, they were burying people on top of people. See these two markers? They laid them up on this grave. So we're not sure which one of these spaces that person is in," says Phyllis Armstrong, a volunteer helping to clean up Lincoln.

Lincoln was designed for 700 graves. So far, volunteers have recorded more than nine times that amount — a total of 6,700 graves, some of which are actually under nearby roads.

"It's immoral and it's unethical for anything like this to be taking place, especially here in the city of Montgomery," Taunton says.

City leaders agreed. Two years ago, officials created an authority to restore the cemetery. Now, volunteers like Armstrong come out almost every day to cut grass, rake leaves and pick up litter. But the problems underscore a darker part of Southern history. Lee Anne Wofford of the Alabama Historical Commission says Lincoln is a direct result of segregation. 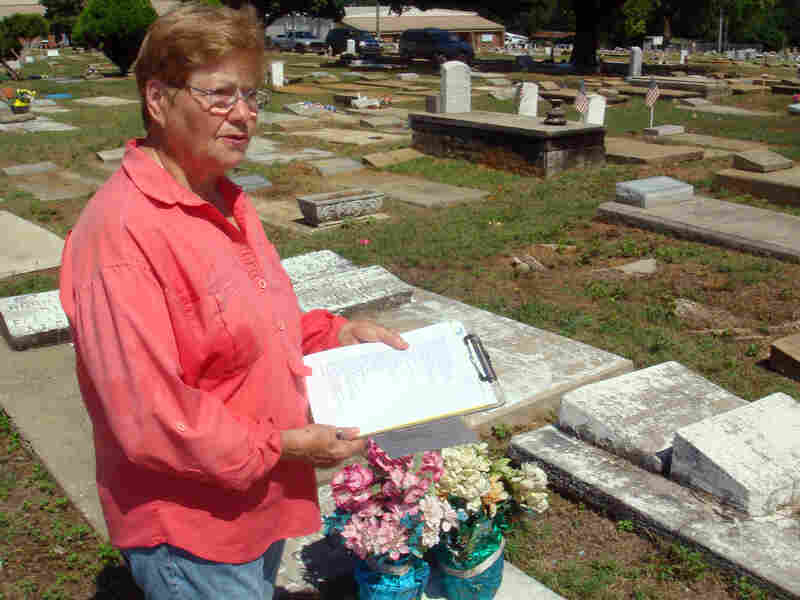 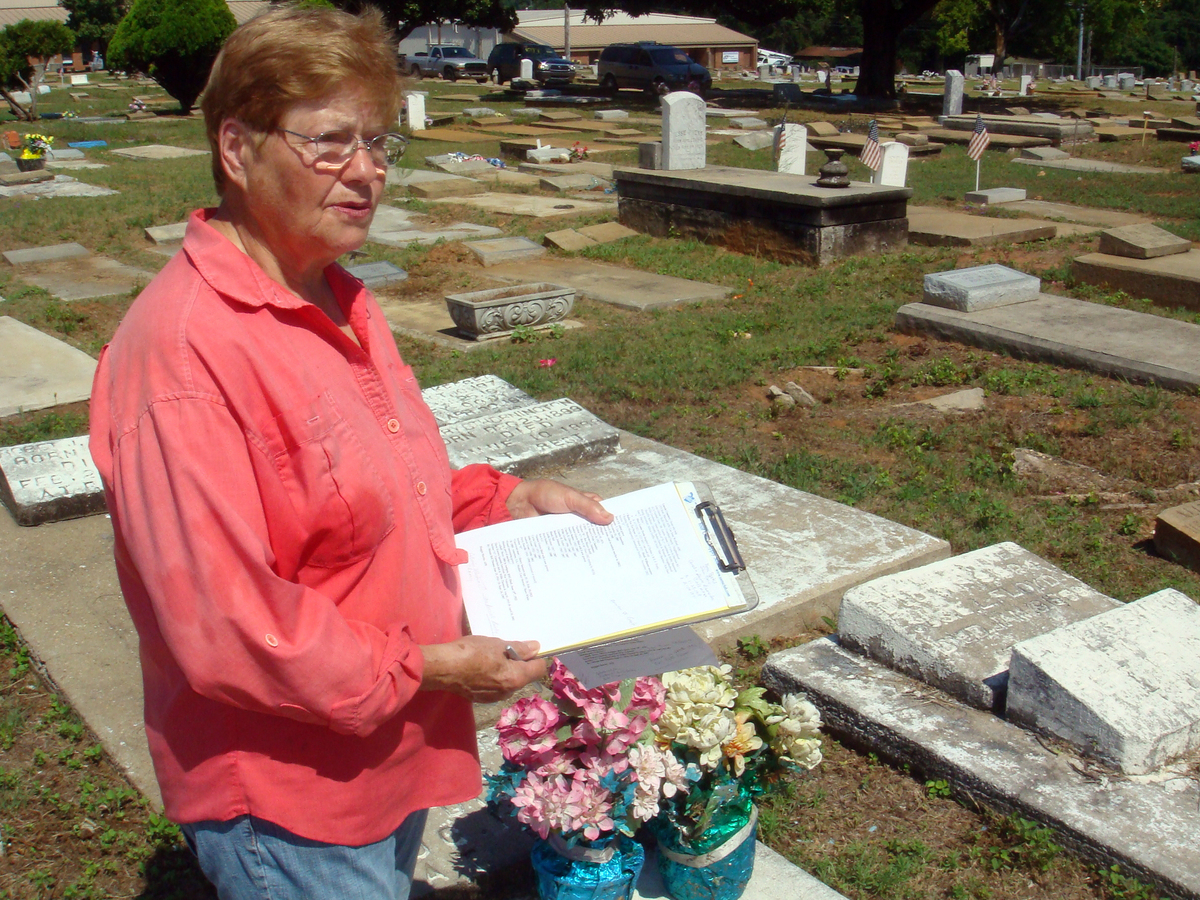 "What people don't understand is that it also applied in death. Not just at bus stations or restaurants or bathrooms, but in death also. So, you have separate cemeteries for whites and blacks," Wofford says.

Wofford walks to the grave marker of a woman who was key in the civil rights movement. Aurelia Browder-Coleman was a friend of Rosa Parks and was lead plaintiff in a historic court case. Browder v. Gayle ended segregation of Montgomery city buses in 1956. But Browder-Coleman's major contribution to the civil rights movement didn't keep her from segregation in death. Her marker was found leaning against a tree in Lincoln, and Wofford says no one even knows where she's buried.

"So you have prominent people who are just forgotten, lost. Where are they? But they were so significant in what they did in overturning long-standing laws," Wofford says.

This fall, a judge in Montgomery is set to decide who owns Lincoln Cemetery. hundred years. Until then, volunteers like Phyllis Armstrong will continue to clean and document graves and try to uncover the secrets that have been kept hidden for more than a hundred years.