Accessibility links
Israel Wary Of Egypt's Calls To Alter Peace Treaty Israel is welcoming Egypt's military efforts to stamp out Islamist militants in the Sinai following a deadly border attack. But calls in Egypt to modify the military provisions of the Israeli-Egyptian peace treaty — to strengthen its security in the Sinai — has led to concern in Israel. 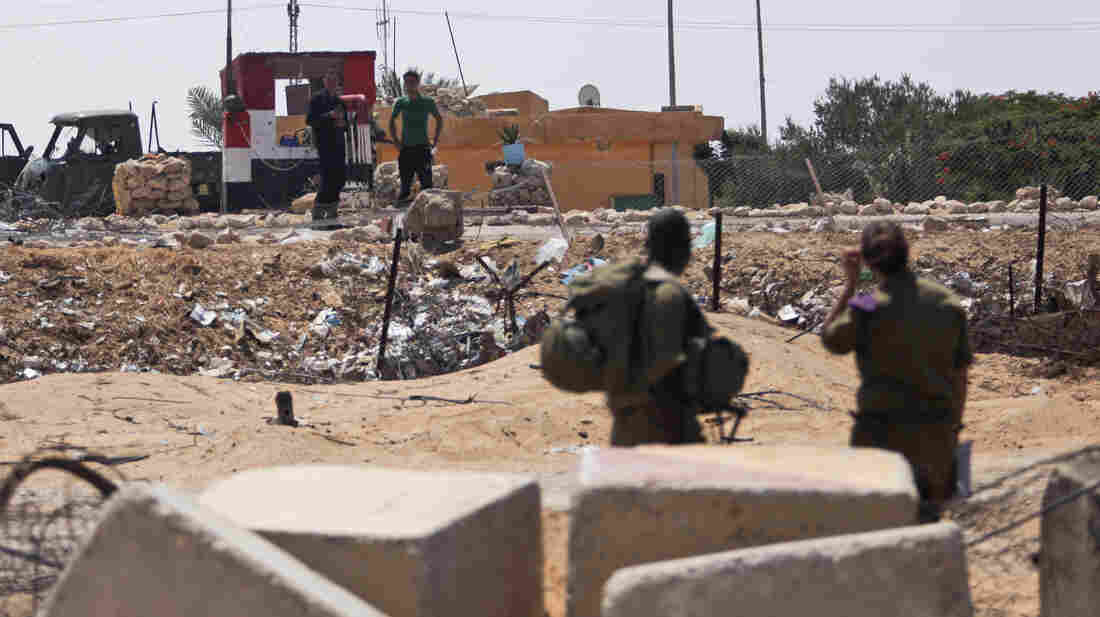 Israeli soldiers look at their Egyptian counterparts from their side of the border Wednesday at the Kerem Shalom border crossing, where an attack by Islamist militants on Sunday killed 16 Egyptian soldiers. Tara Todras-Whitehill for NPR hide caption

Israel is welcoming Egypt's military efforts to stamp out Islamist militants in the Sinai following the recent border attack there that killed 16 Egyptian soldiers. The Jewish state has long been concerned over the situation in the Sinai, where there's been an upsurge in violence.

But calls in Egypt to modify the peace treaty with Israel — allowing Egypt to strengthen its security in the Sinai — has also led to concern in Israel.

At the section of the border between Egypt and Israel where Sunday's attack took place, soldiers from the two countries are separated by less than a football field in length. There's no fence left; the militants blew it up.

On Wednesday, the soldiers are extremely jumpy. As soon as we arrive, we are asked to leave, even though we're on a pre-arranged, coordinated trip. We're told it's a closed military area, and that we should leave because of the events that just happened.

But Col. Miri Eisin, an Israeli reserve intelligence officer, says it's not just Sunday's incident that has left Israel wary. 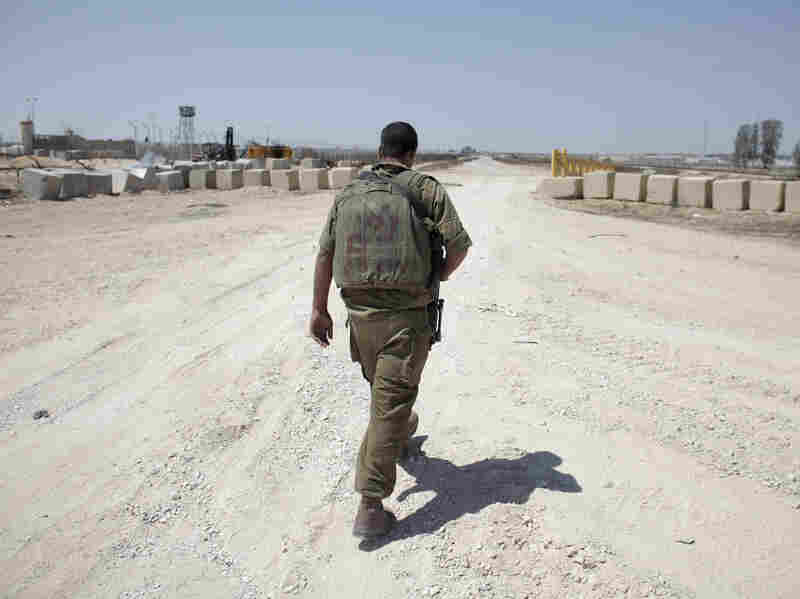 An Israeli soldier walks near the border between Israel and Egypt at the Kerem Shalom border crossing on Wednesday. Tara Todras-Whitehill for NPR hide caption 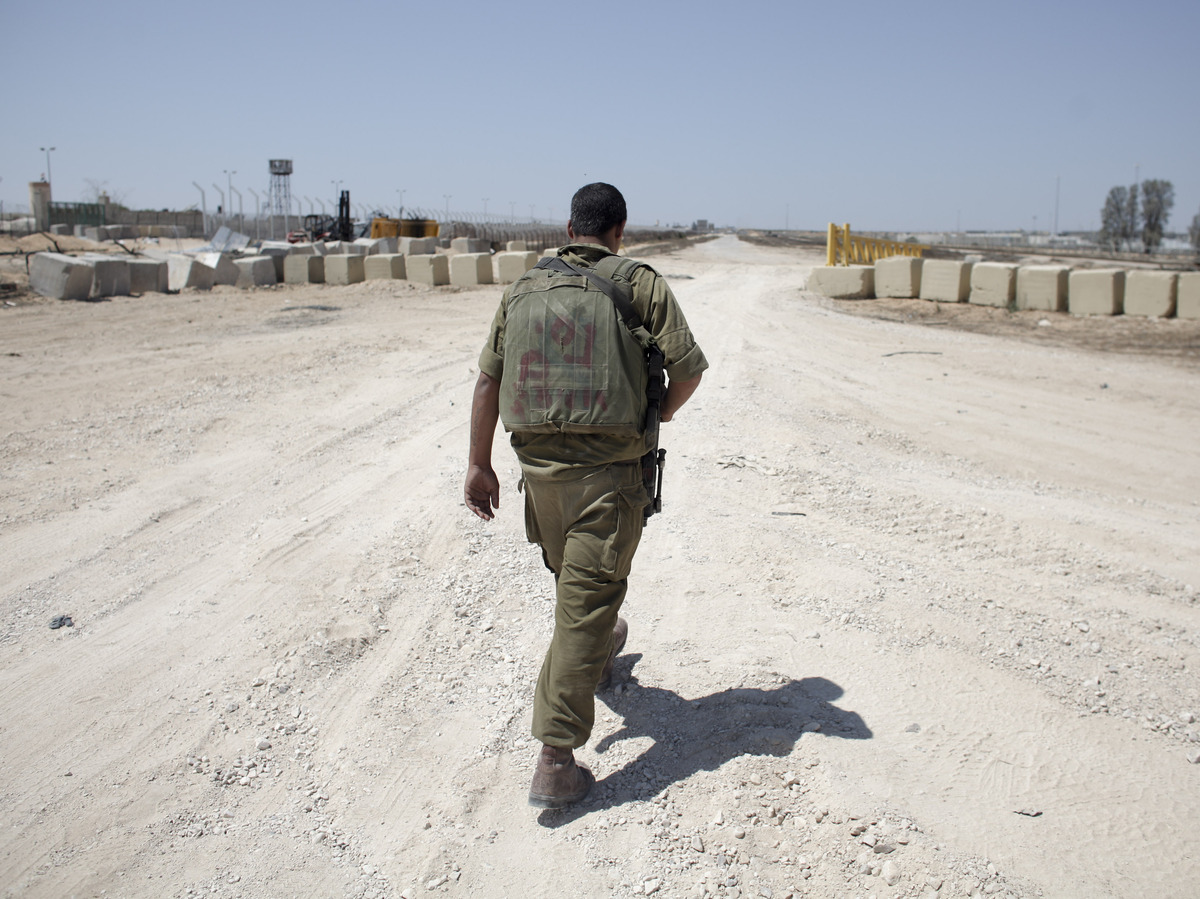 An Israeli soldier walks near the border between Israel and Egypt at the Kerem Shalom border crossing on Wednesday.

"For the last year, this border has become a much more tense border than it was in the past. It used to be a border that you came along, you took your car, and you drove along for a scenic route," Eisin says. "And now you go along, you see the tension that the soldiers themselves are in. This was a very big, well-planned, even well-executed, attack."

And Israelis say they are expecting more infiltrations from the area.

Military officials in Israel publicly welcomed Egypt's Sinai offensive. But privately, they question if there is real resolve in Egypt to get the job done.

Of increasing concern are calls in Egypt to renegotiate the Israeli-Egyptian peace treaty. Originally signed in 1979, the military portion of the agreement came into effect in 1982. It stipulates how many troops and heavy armor the two sides can maintain in the Sinai and the border region.

Until last year, Itzhak Levanon was Israel's ambassador to Egypt.

"What is the need and the benefit in opening this?" he asks. "If the objective is to have more forces, more policemen, on the ground, Egypt [already has] it."

Levanon says that Israel has approved every request so far to move security forces and equipment into the Sinai. He says there is good coordination between the two countries on an operational level and thus no need to change the military annex of the bilateral agreement.

A current Israeli diplomatic official tells NPR that Israel is worried that if any portion of the Egyptian-Israeli peace treaty is renegotiated, the entire agreement could come up for discussion — and that could unravel what has been a linchpin of regional security for more than 30 years.

"It's unclear to me that that has been the main stumbling block, as opposed to the question of political will. And that seems to me to be the more problematic obstacle at the moment, with respect to Egypt dealing with this issue," Hanna says.

Levanon, the former ambassador, says the expectation in Israel is that Egypt will forcefully clean up the Sinai once and for all, without making any changes to the accord.

"My hope is that the Egyptian military, the Egyptian officials, the Egyptian presidency and government will continue on, because this is the mutual interest of the Israelis and the Egyptians to restore the [Sinai] peninsula as a safe base and a stable base," he says.

In the meantime, though, Israel has bolstered its defenses along that troubled border.