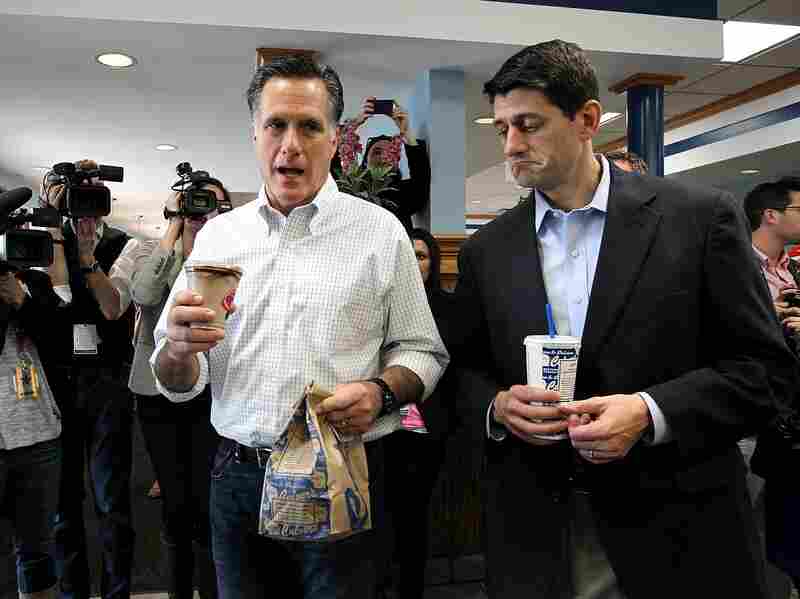 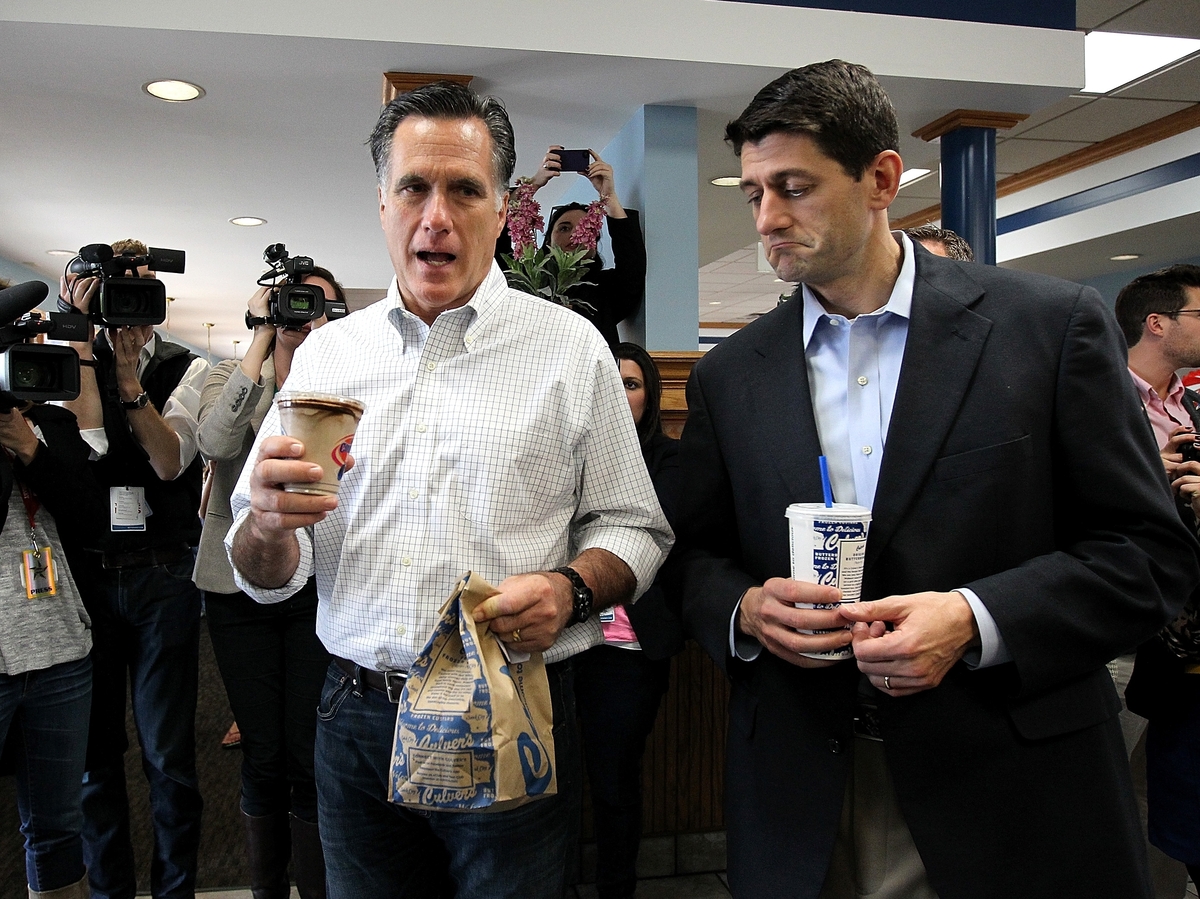 Read An Opinion On Why Romney Should Pick Paul Ryan

Read An Opinion On Why Romney Should Pick Rob Portman

John Nichols is a Washington correspondent at The Nation.

The hyper-ambitious political careerist — who has spent his entire adult life as a Congressional aide, think-tank hanger-on and House member — is looking for a road up. And he is sly enough to recognize that, like Dick Cheney with George Bush, he could be more than just a vice president in the administration of so bumbling a character as Romney.

Ryan figured Romney out months ago.

The two men bonded during the Wisconsin presidential primary campaign in late March and early April. They got on so well that Ryan was playing April Fool's Day jokes on the Republican front-runner — giving Romney a rousing introduction before the candidate came from behind a curtain to find the room where he had expected to be greeted by a crowd of supporters was empty.

Romney loves the prep-school fraternity that he has with Ryan, and every indication is that the former governor would be delighted to add the House Budget Committee chairman to his ticket.

The conversations have occurred. The vetting has been completed. It could happen. And, indeed, as the time for choosing nears, the Ryan buzz has been amplified — mainly by the Wisconsin congressman's friends at The Weekly Standard, which has editorialized enthusiastically on behalf of his selection, and other conservative media outlets. But, now, even ABC's "Veep Beat" headlines "Paul Ryan's Rising Momentum."

Vice presidential nominees are supposed to help tickets, not hurt them.

Romney clearly needs help. Just back from a disastrous trip to Europe and the Middle East, mired in controversies about the "vulture capitalism" he practiced at Bain Capital and his refusal to release tax returns that his dad — former Michigan governor and 1968 Republican presidential contender George Romney — said contenders for the Oval Office had a a responsibility to share with the voters, Romney could use a boost.

But Ryan would be a burden, not a booster, for a Romney-led ticket.

Like Romney, Ryan is a son of privilege who has little real-world experience or understanding. He presents well on Sunday morning talk shows and in the rarified confines of Washington think tanks and dinners with his constituents — the Masters of the Universe on Wall Street — but his record in Congress and the policies he now promotes are political albatrosses.

Some Republicans, perhaps even Romney, do not get this.

But the Obama campaign recognized, correctly, that Ryan's positioning of himself as the point man on behalf of an austerity that would remake America as a dramatically weaker and more dysfunctional country makes him the most vulnerable of prominent Republicans.

Ryan scares people who live outside the "bubble" of a modern conservative movement that thinks the wealthiest country in the world is "broke" and that Ayn Rand is an literary and economic seer.

The House Budget Committee chairman imagines himself as a high priest speaking unfortunate truths about debts and deficits, the unforgiving foe of social spending who would gladly sacrifice Social Security, Medicare and Medicaid on the altar of debt reduction. Ryan has branded himself well within Republican circles, so well that he has parlayed himself into contention for the vice presidential nod. To get that nomination, however, Ryan must count on the prospect that the party that takes as its symbol the memory-rich elephant will suddenly suffer a spell of forgetfulness. That's because the Republican congressman from Wisconsin, for all his bluster, is anything but a consistent advocate for fiscal responsibility and balanced budgets. He is, in fact, a hypocrite,

Or, to be more precise, a hypocritical big spender — at least when Wall Street, the insurance industry and the military-industrial complex call.

Ryan has been a steady voter for unwise bailouts of big banks, unfunded mandates and unnecessary wars. Few members of Congress have run up such very big tabs while doing so little to figure out how to pay the piper. How has Ryan gotten away with his fool-most-of-the-people-most-of-the-time politics?

For the most part, he has until recently flown under the radar — dazzling fellow Republicans with fiscal fancy footwork, while dancing around weak Democratic opposition in his home district.

But no more. This year, Ryan is being called out by an able challenger with actual experience in the private sector, as well as local government. Rob Zerban, the congressman's Democratic challenger, is not fooled by Ryan's budgetary blathering.

Zerban is familiar with Ryan's record. And he has been calling the budget committee chairman out on his "faux fiscal credentials."

"Congressman Paul Ryan can grandstand about the debt all he wants, but at the end of the day, Ryan is a root cause of many of the financial issues our country faces today," says Zerban."From supporting two unfunded wars, to dumping millions of senior citizens into the Medicare Part D 'donut hole' while tying the hands of the government to negotiate prescription drug prices, and from fighting for subsidies for Big Oil that his family personally benefits from, to supporting the unfunded Bush tax cuts for his wealthiest campaign contributors, Paul Ryan's hypocrisy is astounding."

Even as national Republicans "vet" Ryan as a potential running mate for Mitt Romney, Zerban has been revealing the reality of a congressman who may talk the talk but who has never walked the walk. "Congressman Ryan fell down on the job, and is now trying to push the blame for his bad policy decisions onto President Obama," says Zerban. "Congressman Ryan had ten years in Congress — almost all with a House Republican majority — to reduce the deficit, prior to President Obama's election. He did nothing."

If, by some chance, Paul Ryan were to become the Republican nominee for vice president, the whole country would be talking about his duplicity when it comes to the balancing of budgets.

Ryan's first vulnerability would be the legitimate concern about his willingness to rip apart the social safety net, under the guise of "reforms" that would undermine and eventually destroy Medicare, Medicaid and Social Security.

But under the serious scrutiny to which he would finally be subjected, Ryan would be revealed as something worse than a fiscal fabulist.

He would be revealed as a hypocrite of the highest order. Americans can handle hard truths and bold ideas. But they're not so good with hypocrisy.

And they wouldn't be so good with Paul Ryan.