Accessibility links
In Dry Times, Movies Highlight Tenacity And Hope - Bob Mondello On Drought Films The current nationwide drought won't let up — it's being compared to other drawn-out dry spells in the '30s and '50s. NPR's Bob Mondello looks at how droughts have inspired Hollywood over the decades. The results vary in tone but always highlight people's resilience — the simple stubbornness of life. 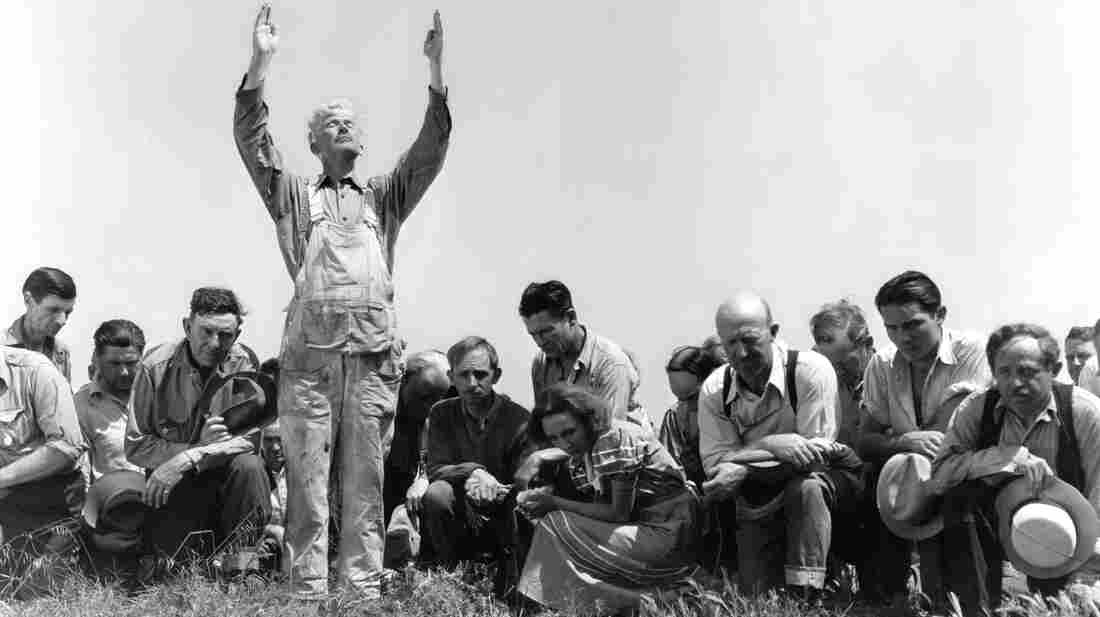 Henry Hall prays to the heavens in 1934's Our Daily Bread. King Vidor's film about a farmers collective living through a drought was made during one of the country's most catastrophic dry spells. United Artists/Photofest hide caption

The nationwide drought that has withered crops in more than 30 states shows no sign of letting up. But as Katharine Hepburn established in her film, The Rainmaker, that doesn't mean hope has to dry up.

"I dreamed we had a rain, a great big rain," she tells her brothers, only to be told that "a drought's a drought, and a dream's a dream."

Droughts Past And Present

This Drought's No Dry Run: Lessons Of The Dust Bowl

That's Hollywood's "Dream Factory" for you, shooting holes in its own illusions. The film industry has made plenty of movies about drought through the years, and intriguingly, what those films have used drought to symbolize has changed with the times.

In Rainmaker, for instance, Hepburn was playing a sharp-tongued spinster, who wanted no part of a fast-talking Burt Lancaster when he drifted into town swearing he could conjure moisture from a sky that hadn't seen a cloud in months.

"I read about a rainmaker," she tells him. "Can't remember whether they locked him up or ran him out of town."

The movie was set in the Depression, but was made in the 1950s, a time when post-war Americans were convinced all obstacles could be overcome, evidently including the suspicions of a middle-aged — and metaphorically dried-up — spinster. So when Hepburn finally loosened up, moviegoers knew the sky would soon open up.

Now, even at the time, this was kind of silly. Movies from the previous two decades, being closer to the disastrous droughts of the 1930s, had treated dry spells far more seriously. King Vidor's political allegory Our Daily Bread, about farmers who worked together on a collective when their crops were suddenly without water, was released in 1934 during the most catastrophic drought in American history. And a few years later came The Grapes of Wrath, John Ford's film version of John Steinbeck's wrenching portrait of a generation uprooted when the Great Plains turned into a dust bowl.

This was drought for an audience that had just lived through one. But as that experience faded into memory, Hollywood felt freer to improvise. That love story in The Rainmaker was one direction it took. Another was science fiction: Whole worlds dried up in Frank Herbert's Dune, and The Man Who Fell to Earth, fell to earth, remember, to find water for his dying planet. 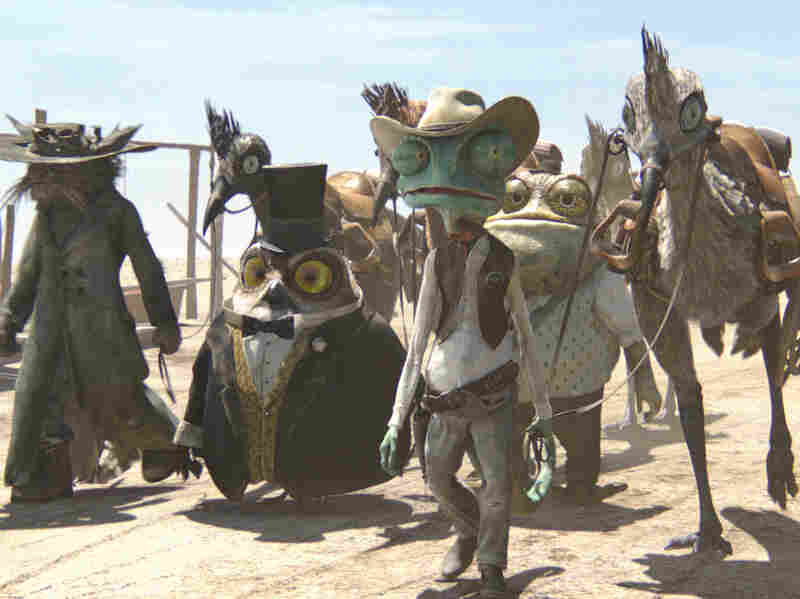 In Rango, the town of Dirt goes through a drought caused by greedy corporations and politicians, not by nature. Paramount Pictures hide caption 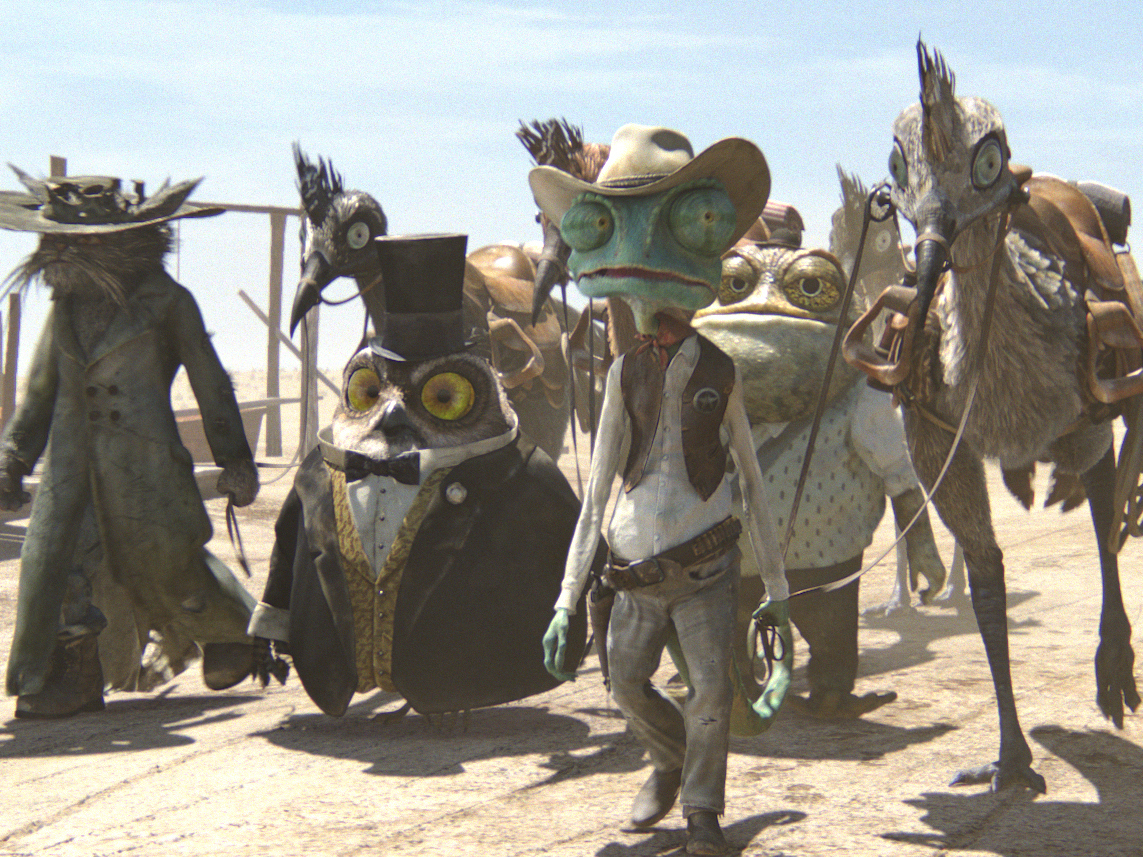 In Rango, the town of Dirt goes through a drought caused by greedy corporations and politicians, not by nature.

There was also the Western, in which man's frontier conquests were often sidetracked on dusty trails where Mother Nature proved as deadly as any bullet.

More recently, Mel Gibson gave us Apocalypto, a historical allegory in which the Mayan civilization combats drought with human sacrifice. And last year, an animated lizard by the name of Rango tackled a very contemporary environmental disaster. The varmints in the town of Dirt were afflicted by a drought caused not by nature but by corporate and political greed.

Different as these storylines are, they share a common thread — one that audiences can identify with, whether they have suffered the deprivations of hot, dry weather themselves, or have only ever thirsted on the way to the refreshment stand. That common thread is resilience.

In real life, drought is the absence of water. On screen, it stands in for other absences — love, strength, political will, family support — the essentials that help us cope when our environment is unforgiving. And what drought films, from Rango to The Grapes of Wrath, inevitably show, in that lonely figure trudging down a dusty highway, or that tuft of grass, defiant in a barren landscape, is the tenacity — the simple stubbornness — of life.