Accessibility links
First Prayer Service Held In Tennessee Mosque After years of protests and roadblocks, a controversial mosque in Murfreesboro, Tenn., finally opened on Friday. It's been a years-long battle to get the place permitted, built and opened for the Muslim community in the town just south of Nashville. 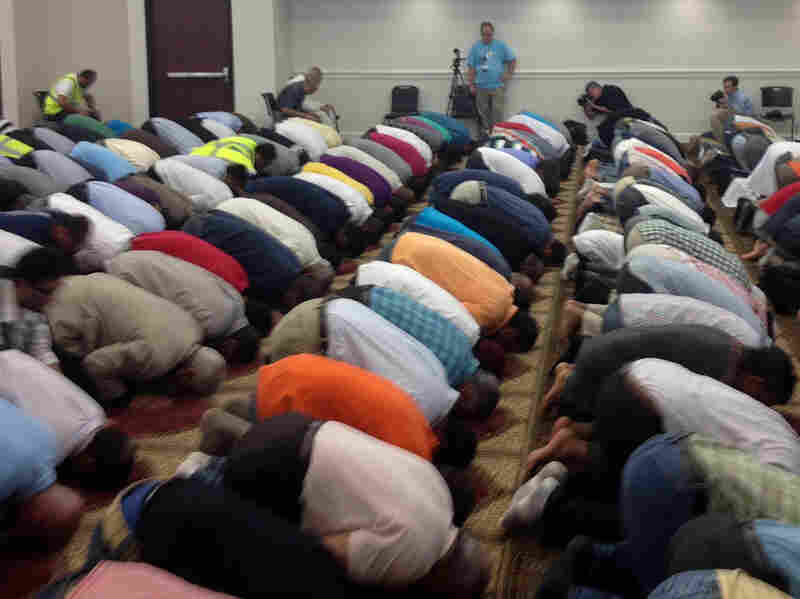 Hundreds of Muslims in Murfreesboro, Tenn., gathered on Friday afternoon for prayers in a new mosque that has — at times — divided the community.

Debate over the building coincided with disputes over the so-called Ground Zero Mosque in New York. The congregation in Murfreesboro weathered a bomb threat, arson attempts and a court challenge. But members say the pain was worth the prize — a proper mosque to worship in after decades meeting in a cramped office space.

The imam called it a day of forgiveness. He also spoke against violent extremism.

Some members of the congregation have lived in Tennessee for 30 years or more. As Itemed Refaat removed her shoes to enter the new worship space, she echoed many who say this was a dream that seemed out of reach.

"[We've been] waiting for a long, long time for this dream come true, so we are so excited," Refaat says.

The $2 million mosque, with its green dome, stands out among the Christian churches tucked into the rolling hills of Middle Tennessee. But like the neighbors, an American flag flies out front.

Essam Fathy has been in charge of this building project.

"This is our flag — I mean this is the American flag. We are Americans. If somebody can't see through that, then they need some help," Fathy says.

As late as Friday, workmen were installing signage in the parking lot, trimming metal posts before planting them in the ground.

Last month, there were real questions as to whether the congregation would be able to move in. A local judge told planning officials not to issue an occupancy permit. Opponents of the mosque had convinced the judge that the project was approved improperly. Ultimately, a federal court stepped in.

The grand opening is planned in a few weeks, but the first Friday prayers did attract some visitors, like Rebin Omer, who lives in Nashville.

There were a few opponents lingering about. One gentleman paced in front of the mosque wearing a hat that said, "I love Jesus." Another group of men prayed outside the Baptist church next door.

Sumrall says Islam shouldn't get the protection of the First Amendment because it's more than a religion. "They're political people trying to take over the country, so we're praying against that," he says.

Vocal critics like Sumrall have been peaceful, but leaders of the mosque say they have hired private security to patrol the area.

Nihad Awad, executive director of the Council on American-Islamic Relations, traveled to Murfreesboro to help celebrate. He had just visited the mosque in Joplin, Mo., that recently burned. He says he's worried about the safety of American mosques.

"But also we are very, very hopeful that the overwhelming majority of Americans appreciate religious tolerance, and they will make space for everyone who wants to live and love his faith," Awad says.

Muslims in Murfreesboro hope their new mosque will get them out of the shadows and become a place where doubters can come to learn about Islam.