Accessibility links
Some Idaho Farmers Pray, Others Turn On The Water Not every farm in the state was blessed with an aquifer for irrigation. For those that are, crops have flourished despite the drought that has stricken much of the U.S. Farmers dependent on rain, however, are stuck with devastating crop losses. 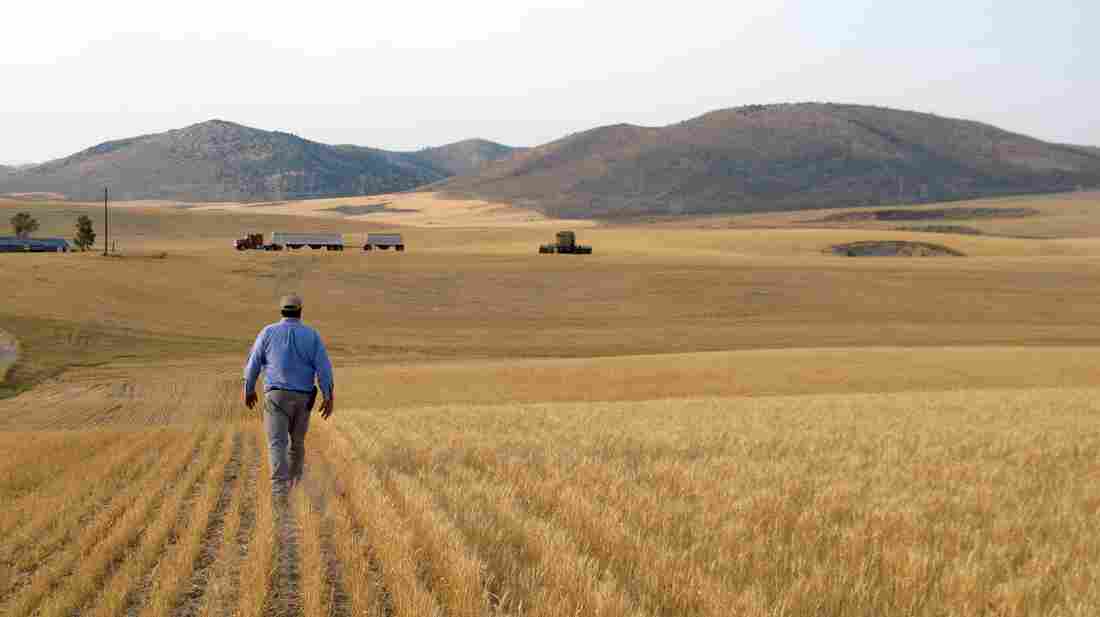 Farmer Hans Hayden walks through his drought-stricken wheat field in Idaho. He says the wheat should be 3 feet tall by now. Molly Messick for NPR hide caption

In the West, in Idaho's arid, high desert, the drought has a mixed effect. There's a big divide between farmers with deep wells and irrigation and those without.

Hans Hayden is a rare find: a talkative farmer. He likes to explain things. But when it comes to the wheat he planted this spring, there's not much to say. This field needed rain. It didn't get it.

"At this point in time, it kind of looks like a desert," he says.

In a good year, Hayden's spring wheat would be nearly 3 feet high by now. The top of each stalk — the head — would be heavy with grain. He steps on stunted rows and kicks up dust.

"These heads really have very few kernels in them, if they even are here," Hayden says.

He breaks off a head and rolls it in his hand, literally separating wheat from chaff. But he doesn't find a single seed.

Hayden has 1,400 acres of drought-withered wheat. He's calling it an almost total loss.

'Turn The Water On'

Not far from Hayden's farm, the slender arm of a pivot irrigation system arches over a cornfield. It sends out 3,000 gallons of water per minute. This is Jim Tiede's farm, and he can barely hold back a grin. 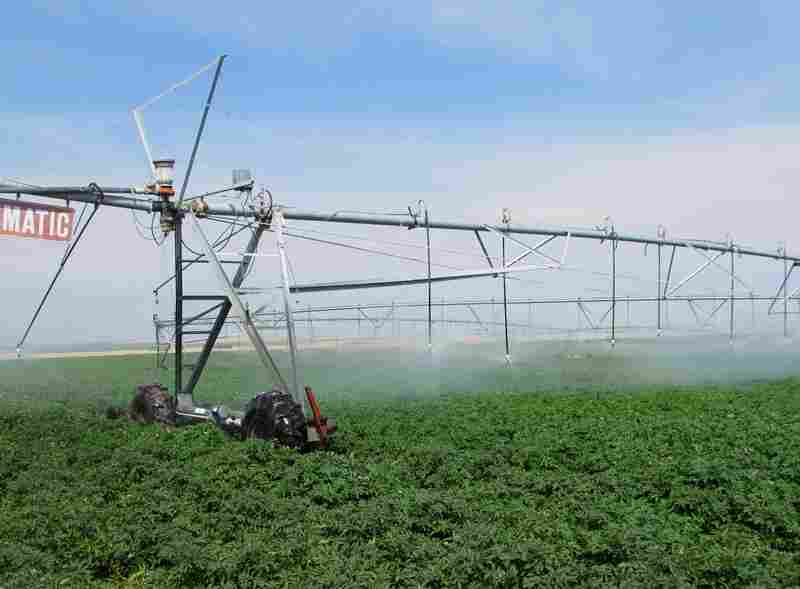 Jim Tiede uses a pivot irrigation system to water his potatoes, so his crops have been growing despite the drought. Molly Messick for NPR hide caption 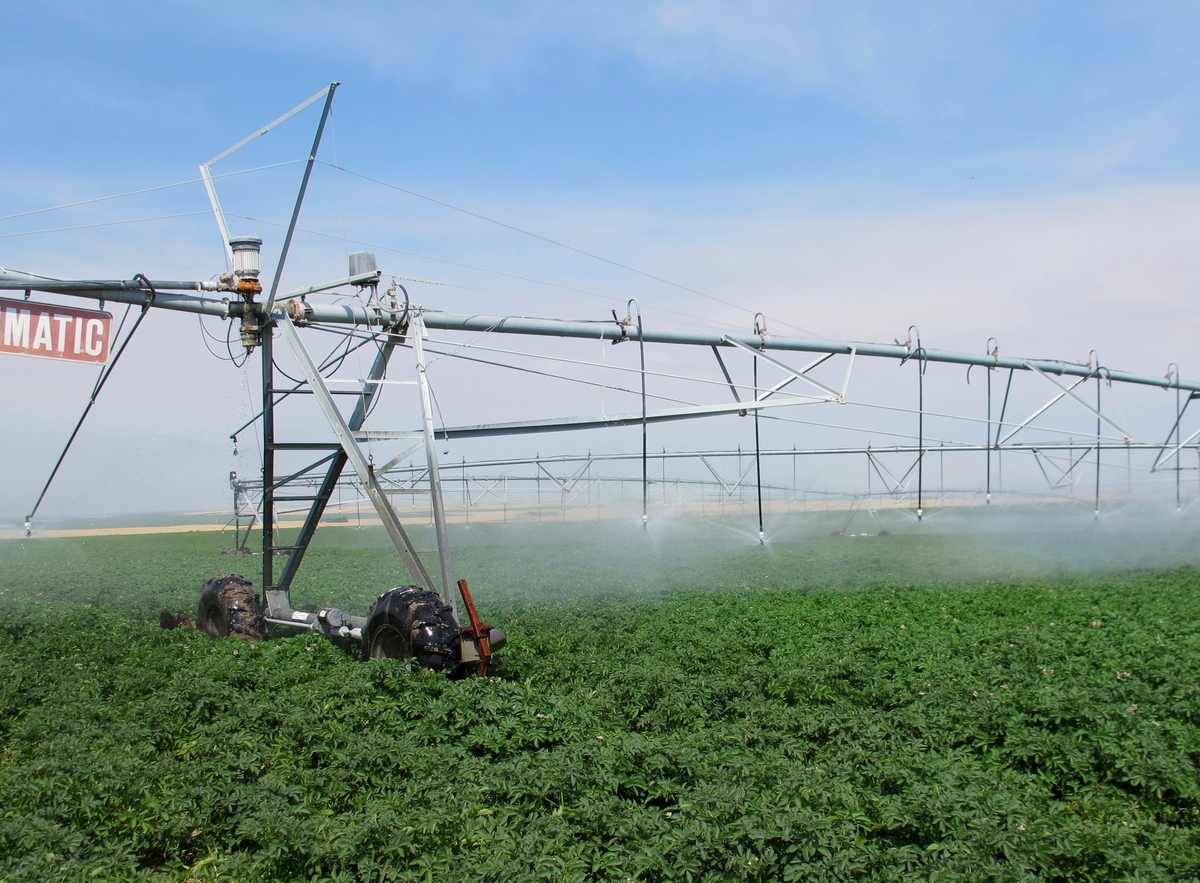 Jim Tiede uses a pivot irrigation system to water his potatoes, so his crops have been growing despite the drought.

Across the road, Tiede's potato plants are getting the same steady spray of water. His wheat fields are a short drive away. The wheat rattles as he walks through.

The kernels are plump. The field stirs and sways in the breeze. A crop like this isn't luck. After the wheat came up in spring, it was irrigated for 60 days straight.

Stan Gortsema is retired now, but he spent 34 years as the county extension agent.

"There's no such thing as drought under a pivot irrigation system. I mean, turn the water on," he says.

"He's looking to the heavens, saying 'Come on, big guy! Give me some rain!' And if it happens, it happens. And if it doesn't, he can lose his whole crop," Gortsema says.

The irrigated farmer is in a completely different business. Wheat is an Idaho dry-land farmer's livelihood. For irrigated farmers like Tiede, potatoes and sugar beets are the cash crops. The wheat is there to give the fields a rest. Most years, Tiede breaks even growing it. He says that's because irrigated farming has a hefty price tag.

Every year, Tiede takes out a $2.3 million loan just to cover the upfront costs of getting his crops in the ground — costs like his $100,000 monthly power bill. It takes a lot of electricity to pump water in a desert.

A Love For The Trade

These big differences between Hayden's and Tiede's operations are mostly a matter of historical accident. Both men farm land settled by their grandfathers. A century ago, all southeast Idaho farming was dry land. Then well-drilling technology came along, and the Tiedes struck gold. Their farm sits over an aquifer. Hayden's doesn't. But he's OK with that.

"I really like raising wheat," he says. It's a simple sentiment. But for him, it's enough.

"The bigger the irrigated farmer, the more he becomes a personnel manager. He never drives his own tractor," Hayden says. "Sometimes if you get very big, you just manage the managers. So then you're sitting in an office, and you changed your position."

This year, Hayden will lose money, while irrigated farmers nearby have a chance at record profits. But Hayden will stick with the life he has.

This story is part of the StateImpact Idaho project. StateImpact is a collaboration between NPR and member stations examining the effect of state policy on people's lives.