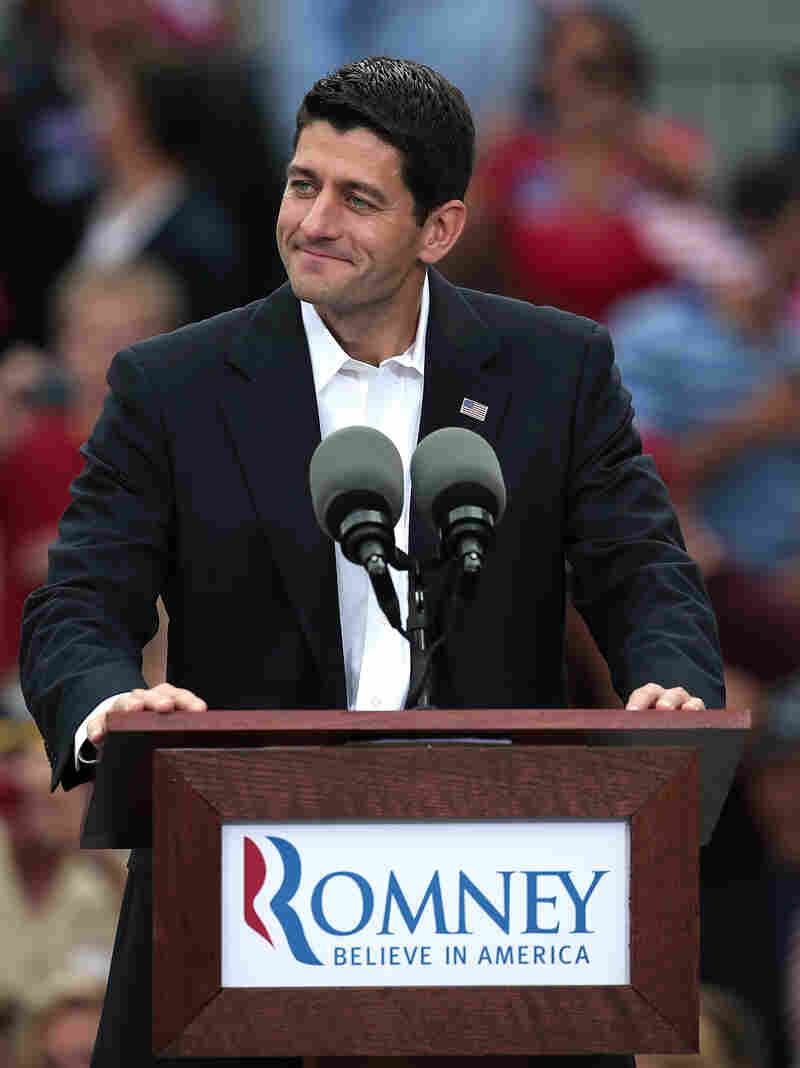 Rep. Paul Ryan of Wisconsin speaks after being announced by Republican presidential candidate Mitt Romney as his running mate in front of the USS Wisconsin in Norfolk, Va., on Saturday. Win McNamee/Getty Images hide caption 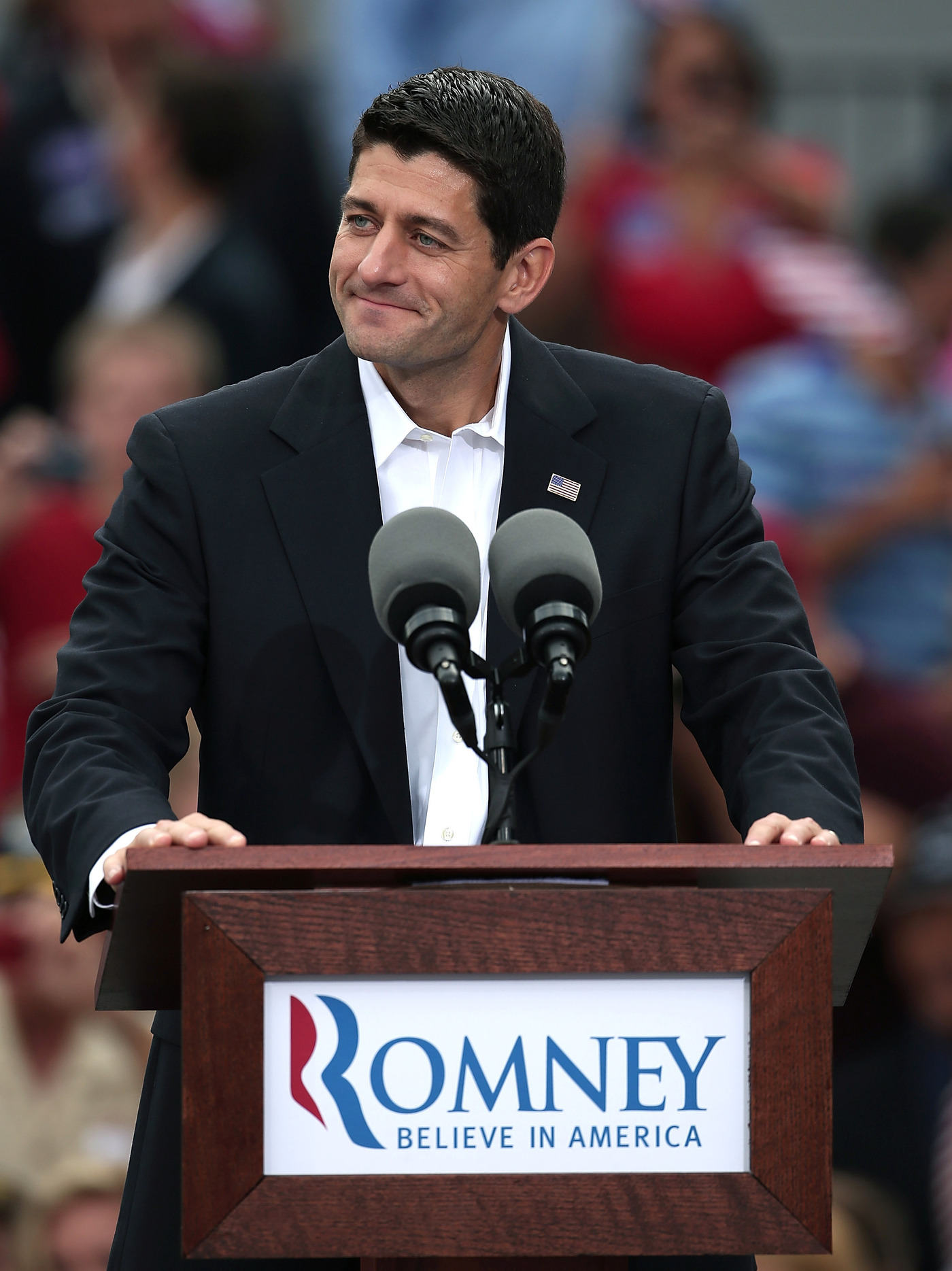 Rep. Paul Ryan of Wisconsin speaks after being announced by Republican presidential candidate Mitt Romney as his running mate in front of the USS Wisconsin in Norfolk, Va., on Saturday.

Thank you Governor Romney, Ann. I am deeply honored and excited to join you as your running mate.

Mitt Romney is a leader with the skills, the background and the character that our country needs at a crucial time in its history. Following four years of failed leadership, the hopes of our country, which have inspired the world, are growing dim; and they need someone to revive them. Governor Romney is the man for this moment; and he and I share one commitment: we will restore the dreams and greatness of this country.

I want you to meet my family. My wife Janna, our daughter Liza, and our sons, Charlie and Sam.

I am surrounded by the people I love, and I have been asked by Governor Romney to serve the country I love.

Janesville, Wisconsin, is where I was born and raised, and I never really left it. It's our home now.

For the last 14 years, I have proudly represented Wisconsin in Congress. There, I have focused on solving the problems that confront our country, and turning ideas into action; and action into solutions.

I am committed, in heart and mind, to putting that experience to work in a Romney Administration. This is a crucial moment in the life of our nation; and it is absolutely vital that we select the right man to lead America back to prosperity and greatness.

That man is standing next to me. His name is Mitt Romney. And he will be the next president of the United States

My dad died when I was young. He was a good and decent man. I still remember a couple of things he would say that have really stuck with me. "Son you are either part of the problem or part of the solution."

Regrettably, President Obama has become part of the problem ... and Mitt Romney is the solution.

The other thing my dad would say is that every generation of Americans leaves their children better off. That's the American legacy.

Sadly, for the first time in our history, we are on a path which will undo that legacy. That is why we need new leadership to become part of the solution — new leadership to restore prosperity, economic growth, and jobs.

It is our duty to save the American Dream for our children, and theirs.

And I believe there is no person in America who is better prepared — because of his experience; because of the principles he holds; and because of his achievements and excellence in so many different arenas — to lead America at this point in its history.

Let me say a word about the man Mitt Romney will replace. No one disputes President Obama inherited a difficult situation. And, in his first two years, with his party in complete control of Washington, he passed nearly every item on his agenda. But that didn't make things better.

In fact, we find ourselves in a nation facing debt, doubt and despair.

President Obama, and too many like him in Washington, have refused to make difficult decisions because they are more worried about their next election than they are about the next generation. We might have been able to get away with that before, but not now. We're in a different, and dangerous, moment. We're running out of time — and we can't afford 4 more years of this.

Politicians from both parties have made empty promises which will soon become broken promises — with painful consequences — if we fail to act now.

I represent a part of America that includes inner cities, rural areas, suburbs and factory towns. Over the years I have seen and heard from a lot from families, from those running small businesses, and from people who are in need. But what I have heard lately troubles me the most. There is something different in their voice and in their words. What I hear from them are diminished dreams, lowered expectations, uncertain futures.

I hear some people say that this is just "the new normal." High unemployment, declining incomes and crushing debt is not a new normal. It's the result of misguided policies. And next January, our economy will begin a comeback with the Romney Plan for a Stronger Middle Class that will lead to more jobs and more take home pay for working Americans.

America is on the wrong track; but Mitt Romney and I will take the right steps, in the right time, to get us back on the right track!

I believe my record of getting things done in Congress will be a very helpful complement to Governor Romney's executive and private sector success outside Washington. I have worked closely with Republicans as well as Democrats to advance an agenda of economic growth, fiscal discipline, and job creation.

I'm proud to stand with a man who understands what it takes to foster job creation in our economy, someone who knows from experience, that if you have a small business—you did build that.

At Bain Capital, he launched new businesses and he turned around failing ones – companies like Staples, Bright Horizons and Sports Authority, just to name a few. Mitt Romney created jobs and showed he knows how a free economy works.

At the Olympics, he took a failing enterprise and made it the pride of our entire nation.

As governor of Massachusetts, he worked with Democrats and Republicans to balance budgets with no tax increases, lower unemployment, increase income and improve people's lives.

In all of these things, Mitt Romney has shown himself to be a man of achievement, excellence and integrity.

Janna and I tell Liza, Charlie and Sam that America is a place where, if you work hard and play by the rules, you can get ahead.

We Americans look at one another's success with pride, not resentment, because we know, as more Americans work hard, take risks, and succeed, more people will prosper, our communities will benefit, and individual lives will be improved and uplifted.

But America is more than just a place ... it's an idea. It's the only country founded on an idea. Our rights come from nature and God, not government. We promise equal opportunity, not equal outcomes.

This idea is founded on the principles of liberty, freedom, free enterprise, self-determination and government by consent of the governed.

This idea is under assault. So, we have a critical decision to make as a nation.

We are on an unsustainable path that is robbing America of our freedom and security. It doesn't have to be this way.

The commitment Mitt Romney and I make to you is this:

We won't duck the tough issues ... we will lead!

We won't blame others ... we will take responsibility!

We won't replace our founding principles ... we will reapply them!

We will honor you, our fellow citizens, by giving you the right and opportunity to make the choice:

We can turn this thing around. Real solutions can be delivered. But, it will take leadership. And the courage to tell you the truth.

Mitt Romney is this kind of leader. I'm excited for what lies ahead and I'm thrilled to be a part of America's Comeback Team. And together, we will unite America and get this done.