Accessibility links
Migrants Targeted Amid Rise Of Greek Extremists As the country's economy lies in ruins, some Greeks feel threatened and burdened by migrants, many of them Muslims. Human rights groups say authorities are ignoring a sharp rise in vigilante attacks on immigrants, including those working legally in Greece. 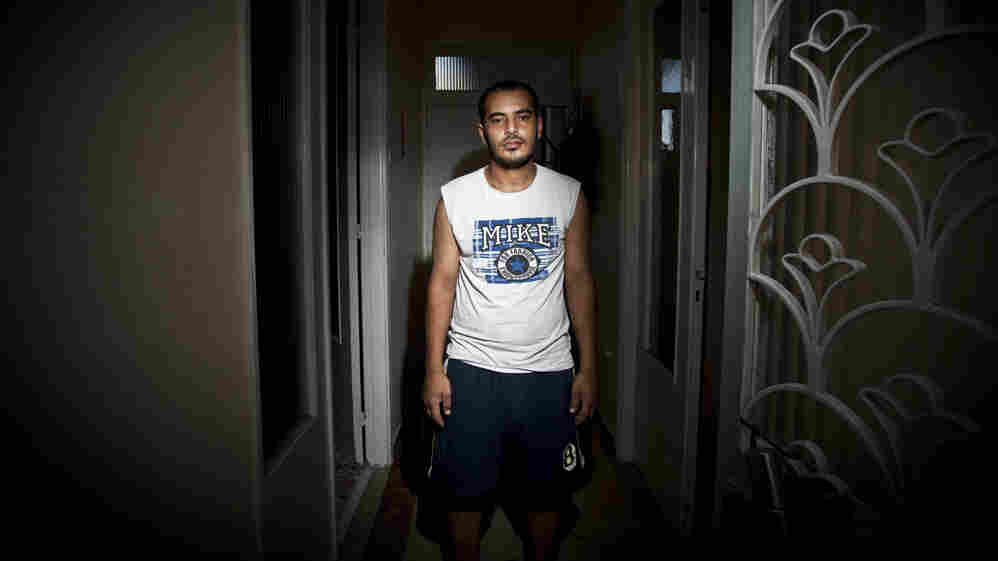 Abouzeid Mubarak, 28, arrived in Greece six months ago. But after being viciously assaulted, the father of three says he is thinking of returning home to Egypt. Myrto Papadopoulos for NPR hide caption

Ahmet Abuhamed runs a fish shop in Perama, a town near the port of Piraeus. He sells the day's catch, including sea bream, mackerel, sardines and octopus. A 40-year-old father of four, he moved to Greece 20 years ago from Rosetta, an Egyptian fishing village near Alexandria.

"All the fishermen [in Greece] are Egyptian," he says. "Go to any island in the country and listen to the conversations on the boats. You'll hear names like Alim and Mohammad."

Egyptian fishermen have worked in Greece for decades. Abuhamed speaks Greek fluently and has many Greek friends. The country feels like a second home, he says.

In the past two decades, Abuhamed has brought more than 60 relatives and friends to work in Greece.

One of them is Abouzeid Mubarak, a 28-year-old father of three young daughters. He arrived six months ago and shared a one-story house with Abuhamed and three other men.

On a hot night in June, he moved his bed to the roof terrace. A noise woke him around 3 a.m. He pulled down the bedsheet covering his face and saw 20 men in black T-shirts surrounding him. 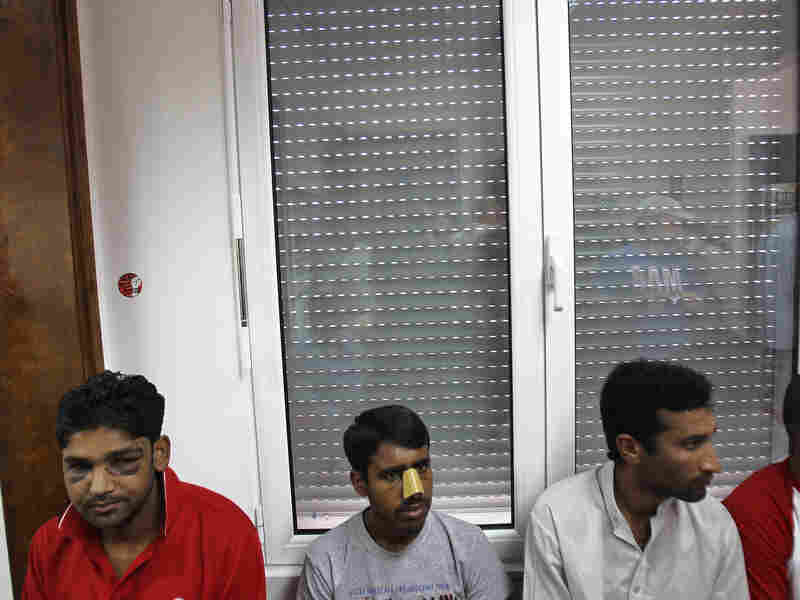 Immigrants at a news conference in Athens on June 21 say they were attacked by members of the extreme-right Golden Dawn party. United Against Racism and Fascist Violence Movement, an immigrants-support group, says Golden Dawn is behind attacks on hundreds of immigrants to Greece. Petros Karadjias/AP hide caption 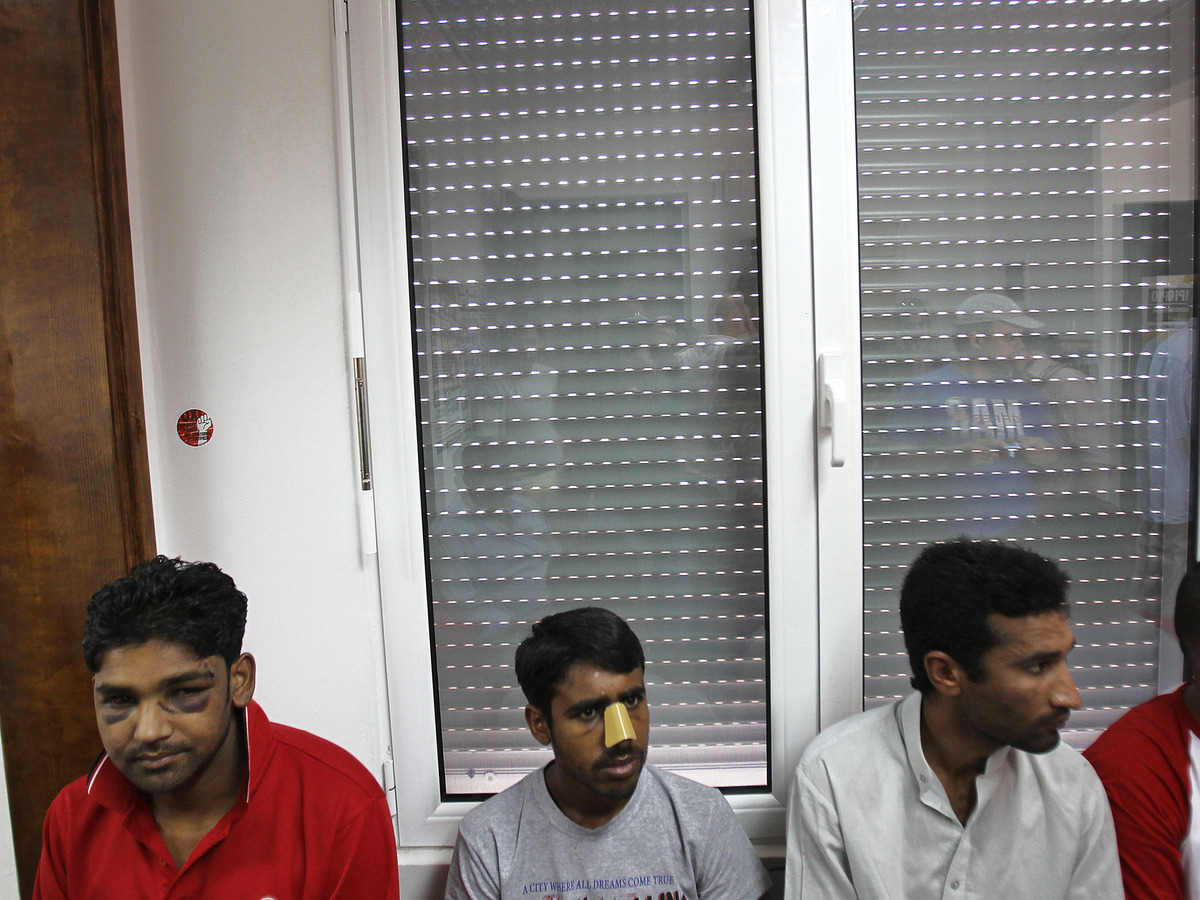 Immigrants at a news conference in Athens on June 21 say they were attacked by members of the extreme-right Golden Dawn party. United Against Racism and Fascist Violence Movement, an immigrants-support group, says Golden Dawn is behind attacks on hundreds of immigrants to Greece.

The men beat Mubarak with wooden bats and iron rods, then tried to break into the house where the rest of the Egyptian fishermen were sleeping.

"There was so much blood on the terrace — so much," says Elhersh, who's 33 and has lived in Greece for 13 years. "I thought he'd never make it to the hospital. I thought he would die."

Mubarak spent weeks recovering. His broken jaw is now wired shut, so he has trouble speaking and eats through a straw.

Police have detained suspects, and police spokesman Christos Manouras says the force makes every effort to investigate such crimes.

Many immigrants can't afford the fee to file police reports, but they are reporting attacks to human rights groups. One Greek organization has recorded more than 300 vigilante attacks since April.

"I was shocked on a daily basis by the stories that we heard and the suffering that we found," she says. "We had no idea of the scale. It really does appear to be a daily phenomenon."

Sunderland and others suspect some of the attackers may be sympathizers of Golden Dawn — an extreme nationalist party that wants, in its own words, to clean Greece of immigrants and land-mine the border with Turkey to prevent more immigrants from crossing. In parliamentary elections in June, the party won 18 seats of 300 in parliament.

Its members recently left fliers at businesses owned by immigrants in the Piraeus suburbs that demanded that the immigrants leave in a month — or else.

Ilias Panagiotaros, a parliamentary deputy for Golden Dawn, dismisses the connection between his party and the attacks.

"Police records show that about 85 percent of all incidents that have to do with attacks are made by illegal immigrants against Greeks," he said. "This is the one and only truth."

Golden Dawn gets traction from accusations like this because Greece is a transit point for more than 80 percent of the undocumented migrants coming into the European Union.

Earlier this month, Greek police arrested more than 1,600 people, saying they had slipped into the country illegally. They were sent to holding centers and will be deported. Public Order Minister Nikos Dendias compared the immigrants to ancient Dorian invaders and said their uncontrolled entry is leading Greece to "social collapse."

Because of EU laws, many migrants get stuck in Athens, where they can't find work. They live in cramped, crumbling apartments or on the streets. Others wait at the port city of Patras to stow away on ferries bound for Italy.

More than a million immigrants live in Greece — about 10 percent of the country's population. About 800,000 live here legally, while more than 350,000 are undocumented.

Many of the newcomers are Muslims from North Africa and Central and South Asia. Some Greeks feel threatened and burdened by them, especially as the debt crisis has destroyed the country's economy, says Jan Egeland, Europe director of Human Rights Watch.

"We see that austerity makes all of the things come out of the shadows," he said. "Migrants and minorities are the first to feel this."

The Egyptian fishermen of Rosetta — who work here legally — are certainly feeling it.

They're alarmed at how unwelcome they suddenly feel in a country that once embraced them.

Abuhamed, the fish shop owner, moved to a new apartment. So has Mubarak, the young fisherman who was almost beaten to death.

Fearing more vigilante attacks, Mubarak and his housemates now sleep with iron rods next to their beds.