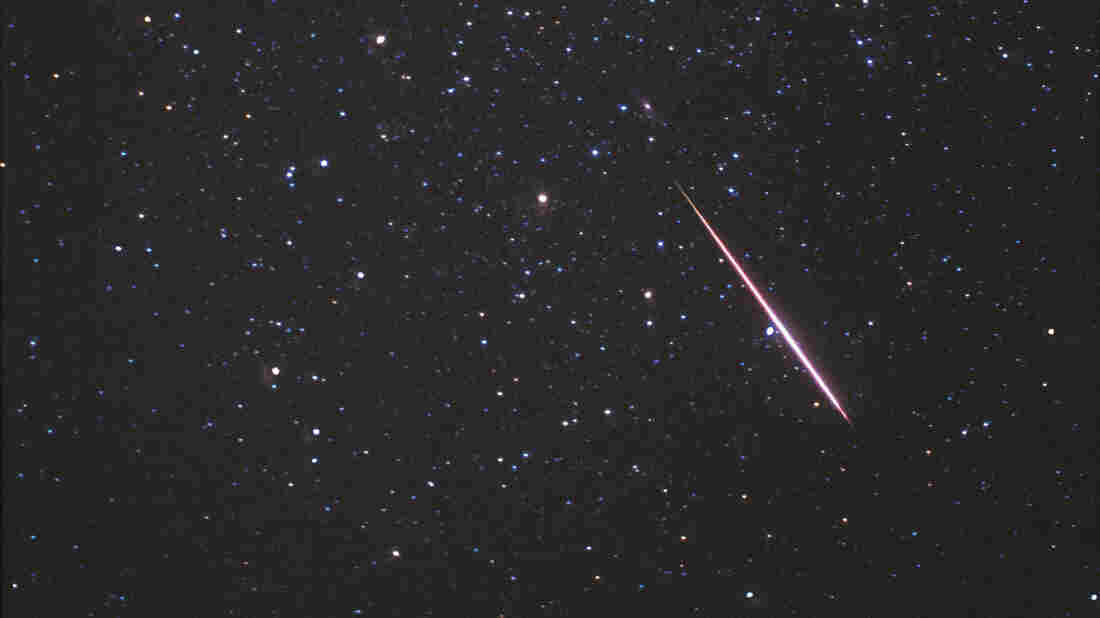 In this photo released by SkyandTelescope.com, a Perseid meteor flashes across the constellation Andromeda on Aug. 12, 1997. Rick Scott and Joe Orman/AP hide caption 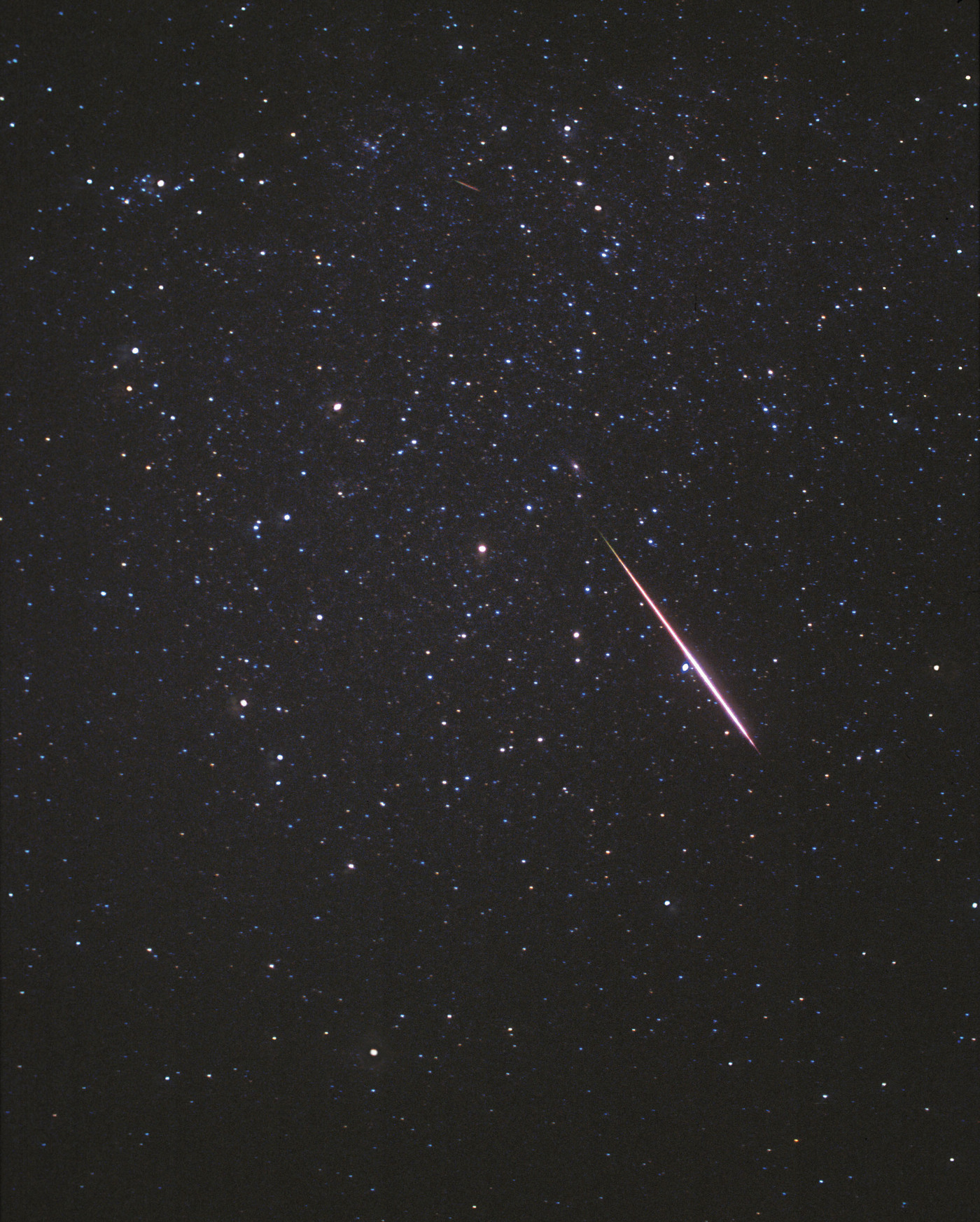 In this photo released by SkyandTelescope.com, a Perseid meteor flashes across the constellation Andromeda on Aug. 12, 1997.

NPR science correspondent Joe Palca is on a mission this summer to answer the deep, burning questions of summertime. So far he's taught us how to build a campfire, explained the best way to roast a perfect marshmallow and explored the icy mystery of brain freeze.

In this latest installment, Palca is looking toward the skies. Just what is a meteor shower? Meteor showers occur several times during the year. The latest one, the Perseids, peaked just this past weekend.

To answer the question, Palca didn't trek up to a fancy telescope; he took a trip to Venice Beach in California.

Meteors are pieces of space debris that plow into the Earth's atmosphere. Most of this debris is no bigger than a grain of sand on the beach, but sometimes they're big chunks of rock. Often these meteors come from junk spewed out by comets as they orbit the sun.

Comets are basically balls of ice and small clumps of dirt. Think of them as a kind of cosmic dump truck whizzing around the sun, shedding their load as they go.

To understand meteor showers, let's try this analogy. Think of an outdoor shower. Imagine the water flowing out of it represents the band of dirt streaming around the sun, with the water drops represent the individual grains of dirt.

And now you have to imagine that I, Joe Palca, am the Earth. And every once in a while, my earthly orbit takes me through this circling band of dirt. 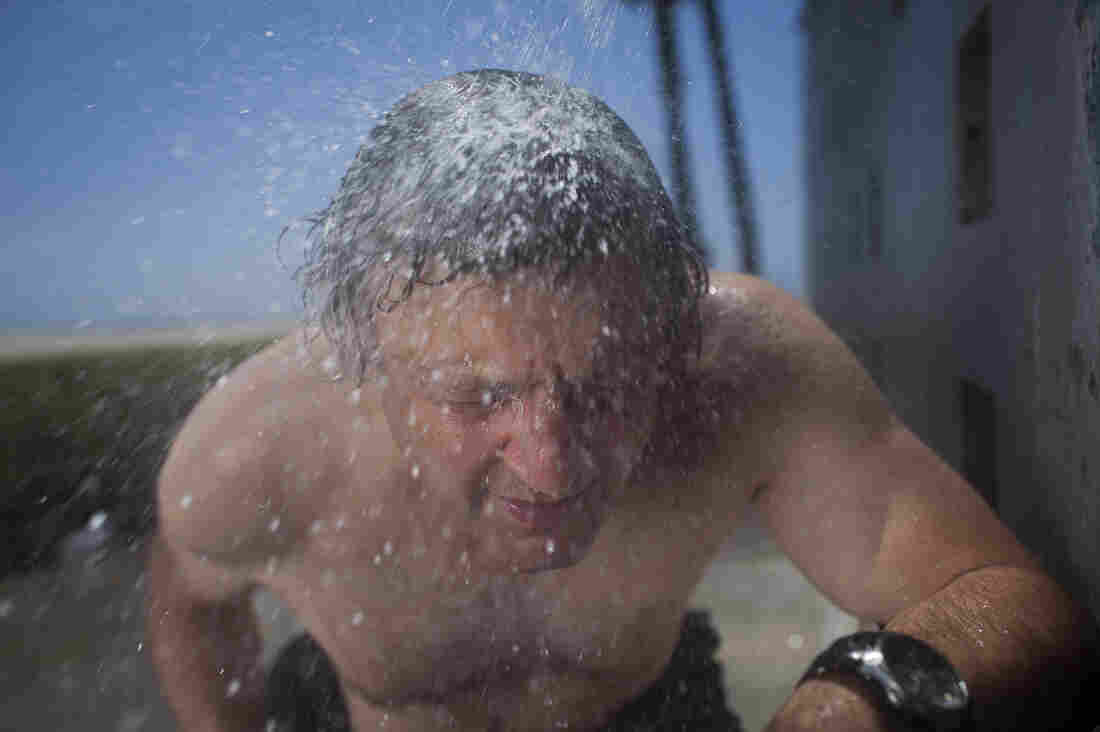 The water droplets are the particles of broken comet streaming past me. OK. I'm out now. I've passed through the droplets.

And that's just how you get a meteor shower.

The Earth passes through the grains of dirt as they stream into the atmosphere, blowing past the air molecules in the atmosphere at supersonic speeds.

This makes the air glow, so for a few moments you get a streak of light until the grain burns itself up. The bigger the grain, the brighter the glow, and the farther it travels.

It's not really a shower of dirt particles — maybe one or two a minute.

The Perseid shower peaked over the weekend on Sunday, so you've mostly missed that one. The next really big one is the Geminid shower in December.