'Stars Earn Stripes': It's Offensive, But At Least It's Boring

'Stars Earn Stripes': It's Offensive, But At Least It's Boring 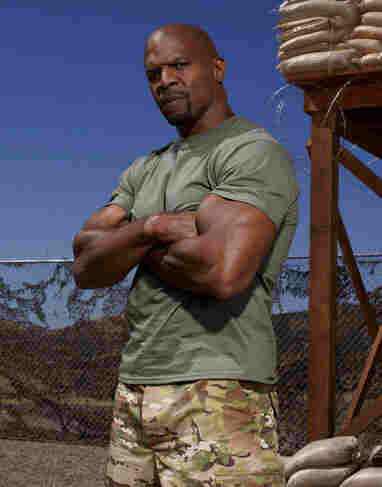 Terry Crews is one of eight celebrities supposedly getting a taste of military life in Stars Earn Stripes. Chris Haston/NBC hide caption

The fact that NBC's new reality show Stars Earn Stripes is kind of an offensive concept should not distract you from the fact that it's stultifyingly boring as television and badly designed as a reality-competition show.

The idea behind the show is to pair eight celebrities with eight military/law enforcement partners in a kind of Combat With The Stars format and put them through a series of competitions, structured as "missions." Each time a celebrity completes a "mission," he (or she) earns a bit of money for a veterans' or first-responders' charity. And at the end of the series, someone wins $100,000 for their charity.

That's right: If you successfully complete a series of military-style drills designed to emulate military service, NBC will give your charity one-fifth as much money as CBS gives to the champion of Big Brother, the show where you win money literally for doing nothing the longest.

The show's conceit is to stress over and over that it is designed to teach people like Dean Cain and Olympic skier Picabo Street what it's really like to be a soldier. Host Samantha Harris (who used to be the co-host of Dancing With The Stars, in fact) says at one point that the missions are "reminiscent of counterinsurgencies that have taken place all over the world."

You know, it's reminiscent of those, other than ... separation from your family and your daily life and fear of coming to bodily harm. Not that this keeps Dean Cain from describing his feelings, during one portion of a mission in which they're swimming with heavy gear on, with the phrase, "I know there's a chance I could die."

Your inner voice may reasonably rebel at this. No. No, Dean Cain, there is no realistic chance you could die, surrounded by what producers recently told TV critics was "a huge redundancy of safety" meaning that "at no time was anybody put in specific harm's way." That "huge redundancy of safety" was mentioned when actor Terry Crews claimed to have almost drowned, and it was immediately clear that producers wanted everyone (maybe including their insurance company) to know that this was, you know, kind of a figure of speech — any injuries, the producer clarified, were what he called "weekend warrior type of injuries that you'd get if you were a softball or a flag football player." Softball or flag football, got it? Honestly, I half-expected him to use the word "Nerf."

Claiming to have been in danger here is a little strange, particularly when compared with the risks faced by people who do this kind of thing in the military rather than on a game show. No one is saying swimming with heavy gear isn't hard, or learning to shoot a machine gun isn't hard, or doing a belly-crawl isn't hard, or walking in the mud isn't hard. And nobody is saying that you can't gain an extra appreciation for some of what actual soldiers go through by doing those things.

But to say that you can understand what it's like to be in the military by shooting a gun and swimming with heavy gear is like saying you can understand what it's like to have cancer by shaving your head. You can perhaps gain sympathy for what one element of the experience feels like, but it seems awfully arrogant to set this up as any sort of "now I understand what these guys go through" mind-blower. When Crews says he's participating "to get to see what the soldier life is really about," it's supposed to sound admiring of that life, but it reads as unintentionally dismissive.

Whatever the problems faced by Stars Earn Stripes as an idea, its problems as television are just as severe (if not as meaningful).

Part of the problem is the celebrities chosen — singer/host/celebrilunk Nick Lachey; actors Cain and Crews; "four-time Iron Dog Champion" Todd Palin (that's how you know him, right?); boxer and Dancing contestant Laila Ali; "WWE Diva" Eve Torres; Olympian Picabo Street; and The Biggest Loser trainer Dolvett Quince. They're all blandly pleasant, because nobody is going to cast a celebrity on this show to act up. They all have the same attitude toward their task: they're in awe of their trainers, they love the military, they say over and over that they're shocked by how hard it is, they don't want to let anyone down, and so forth. Almost any line spoken by any one of them could be said by any other. Combine that with the fact that they all wear gear that keeps you from seeing their faces while they're competing, and they all seem extra-anonymous.

There can be successful reality shows where nobody acts like a jerk; that's obviously not what would be called for here. But there's no personality. None of these people has a distinctive or interesting attitude about what they're doing, or anything in particular to overcome. Sure, outdoorsy Todd Palin is more of a natural at shooting and mud-crawling than great-teeth-y Nick Lachey, but that doesn't particularly bother or surprise anyone, so who cares?

Reality shows don't need bad attitudes, but they need interesting attitudes. This is essentially a lot of naturally athletic people participating in a hard-core athletic competition. There are no underdogs. There are no tensions. Everybody is similarly deferential and humble and is, relative to the general population, blessed with a lot of natural aptitude for this kind of thing. It's the battle of the overdogs to determine who's the most "over" of all. (I kept wanting it to turn into something out of the poker sequence from the early minutes of Ocean's 11, where the military guys — who are fun to watch — shake their heads over these incompetent goobers they're supposed to train. It didn't happen.)

It's surprisingly hard, in general, to build stakes in a reality competition that's for charity. (As one of my reality-watching colleagues likes to say, reality shows do better when they have a bad guy, and it can't exactly be the March of Dimes.) It's even harder when the setup requires that everyone be respectful and polite all the time, to the point where everyone's attitude is identical to everyone else's and no one can even express frustration or anger.

Looked at cynically, this is an attempt to exploit positive feelings about the military and widely held respect for the people in it to prop up a dumb competition show (also hosted by actual military person General Wesley Clark) that insults real service by playing in the mud and calling it combat. But even looked at generously, it's a well-intentioned, agonizingly slow-moving dud that, at least in tonight's debut, stretches what might make about ten minutes of good television into two hours of everyone competing to see who can say the most positive, most admiring things about those who serve.

Right before, of course, confusing that service with mucking about on a game show.