Accessibility links
Melons, Squash, Cash: A Million-Dollar Donor Sprouts Until recently, Amy Goldman, the author of lavish books about heirloom fruits and vegetables, didn't have much interest in politics. But her concern about women's health led her to donate $1 million to a pro-Obama superPAC — and another million to Planned Parenthood's political arm. 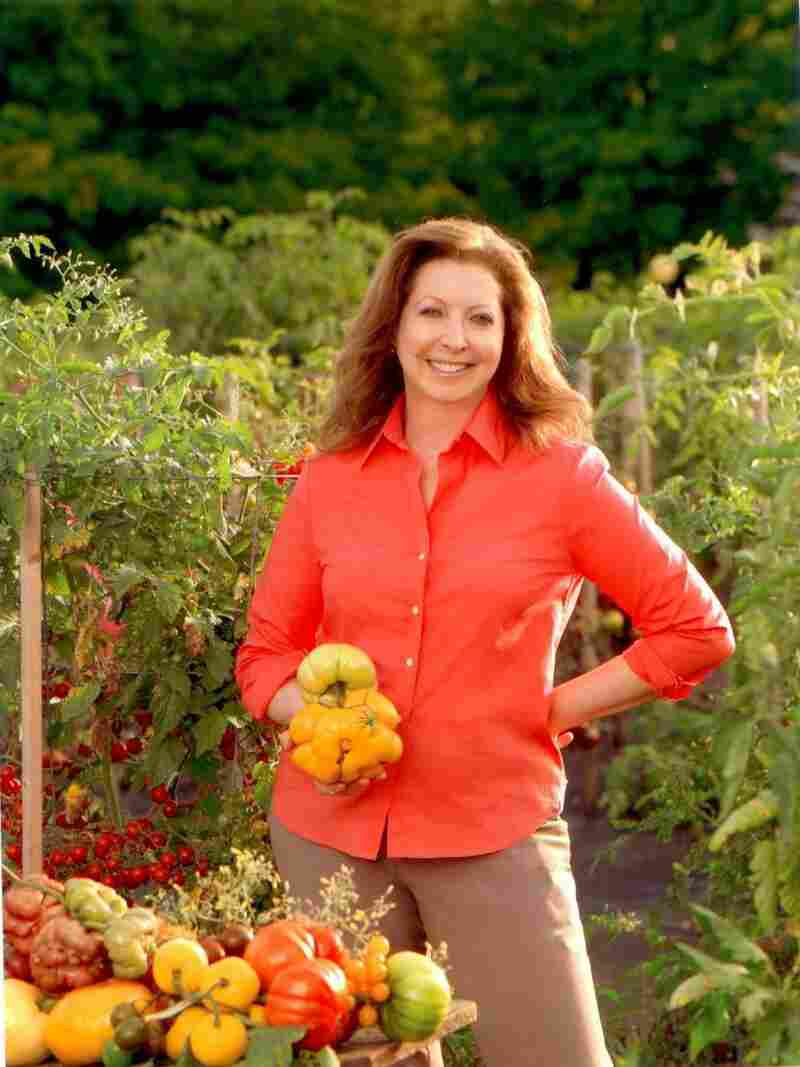 Amy Goldman, known for her gardens and her illustrated coffee-table books about plants, has donated $1 million to a pro-Obama superPAC. Sandi Fellman hide caption 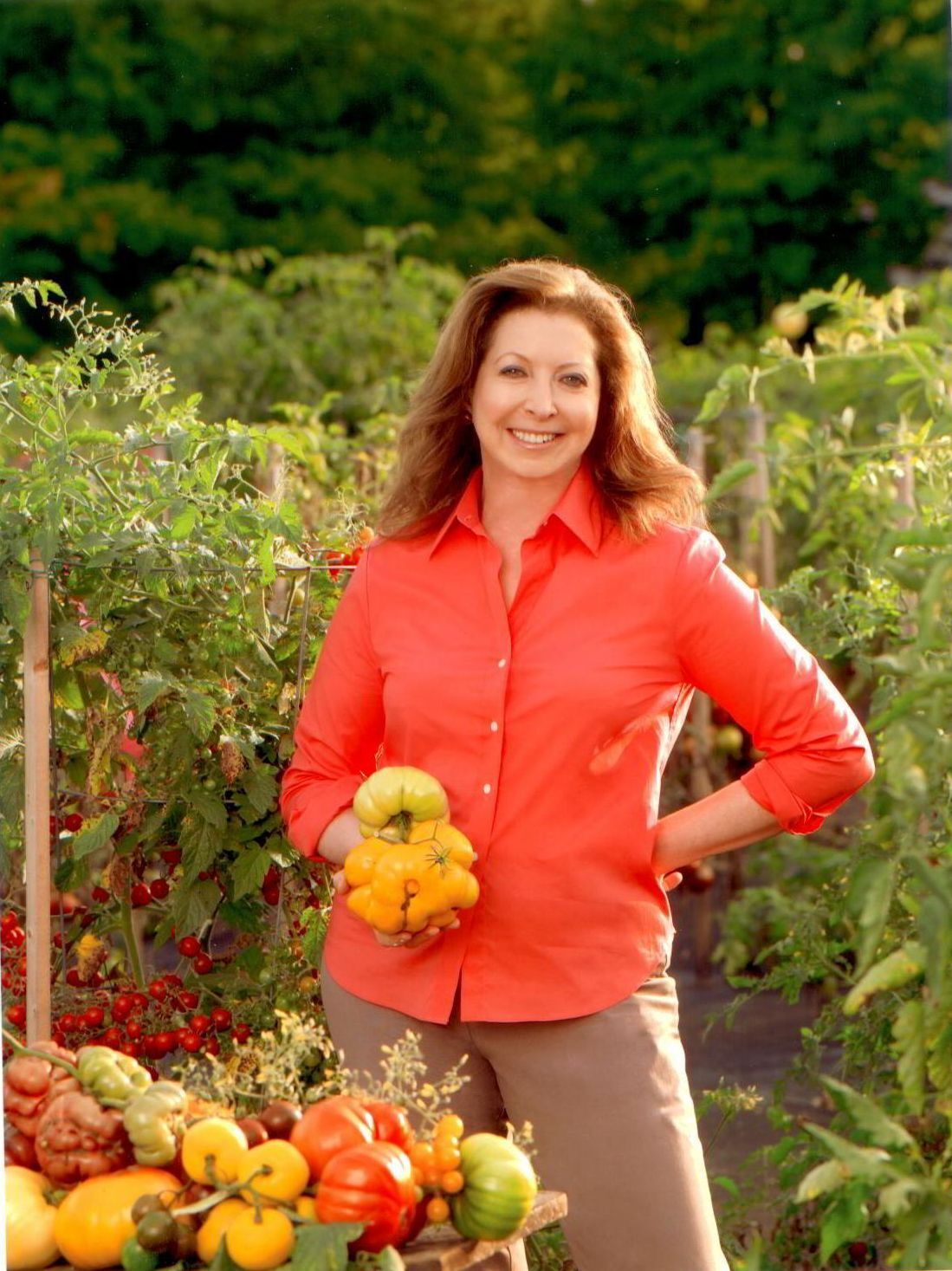 Amy Goldman, known for her gardens and her illustrated coffee-table books about plants, has donated $1 million to a pro-Obama superPAC.

Amy Goldman is best known as the author of lavish books about heirloom tomatoes, squash and melons. Now Goldman is trying to cultivate a second term for President Obama.

Goldman wrote a check for $1 million to a pro-Obama superPAC — and gave another million to the political arm of Planned Parenthood.

On a recent summer morning, Goldman was out in the garden early, pollinating heirloom melon plants by hand. Goldman grows hundreds of rare and exotic varieties of melons, tomatoes, squash, beans, peppers and more on her farm in Rhinebeck, N.Y. — about a two-hour drive north of Manhattan.

"I am a seed saver and collector," she says. "And I'm trying to preserve oldies but goodies."

From the garden, it's a half-mile uphill to the main house. Goldman drives a motorized cart past acres of woods and gently sloping pasture for cows, chickens and geese, up to an 18th-century farmhouse that she has restored and expanded.

If Goldman has an eye for real estate, she might have inherited it from her father. Sol Goldman and his partner built a New York City real estate empire that was estimated to be worth a billion dollars when he died in the 1980s.

Amy Goldman never had much interest in the family business — or, until recently, in politics.

"I couldn't stand by and do nothing," she says. "I just felt like it was time for me to step up to the plate, to try to educate voters about, you know, the real issues."

The pre-eminent issue for Goldman is women's reproductive rights. She says her mother, Lillian, was a patient of Margaret Sanger, the founder of Planned Parenthood. Goldman has given money to the organization before, but really stepped up her giving in this election cycle.

"I feel like we're at a pivotal point in American history — a turning point, really, from a women's health and rights perspective," she says. "I'm really, really concerned about the direction this country could take were Mitt Romney to be elected."

Goldman gave $1 million to Priorities USA Action, the superPAC that's trying to re-elect Obama. She has also given a million to the superPAC Planned Parenthood Votes, which helped to air a TV ad in crucial swing-state markets in Iowa, Florida and Virginia.

"When Mitt Romney says, 'Planned Parenthood, we're going to get rid of that,' Romney is saying he'll deny women the birth control and cancer screenings they depend on," the ad says.

Dawn Laguens, the vice president of the Planned Parenthood Action Fund, which is responsible for the ad, says Goldman is the kind of donor who wants results, not attention.

"She is not self-aggrandizing," Laguens says. "She'll probably be embarrassed that people are being asked to talk about her because she does not seek that kind of limelight."

Too Much Money In Politics?

Indeed, Goldman tries to downplay the size of her gifts. They are, she says, small change compared to what some big Republican donors will likely spend in an effort to elect Romney.

But some wealthy Democrats have been slow to write seven-figure checks to help Obama. Jonathan Soros, the son of billionaire financier George Soros, says he's using his money to try to push for campaign finance reform instead.

"Right now you have a system where both parties are sort of equally beholden to large contributions and independent expenditures," he says. "And until candidates and politicians realize that there's actually a political cost to maintaining the status quo, we're not going to be able to change anything."

A few weeks ago, Soros announced he was giving money instead to a new superPAC that plans to spend money in congressional races — with the hope of counteracting the influence of other superPACs.

Many critics on the left have faulted the Supreme Court decision in the Citizens United case that opened the door for big money donors.

Goldman also thinks Citizens United should be overturned, but she's a realist: "We haven't been able to turn back Citizens United. We have to cope with the new reality. At least to my mind, the two superPACs I've donated to can be an enormous force for good. I see it as a public education campaign."

And if her contributions happen to drive women away from Romney and toward Obama, Goldman won't mind that, either.

The audio of this story, as did a previous Web version, mischaracterizes the position of Jonathan Soros, who says he is not actively working to overturn the Citizens United ruling and does not advocate abstaining from political donations to reduce the influence of money in politics.