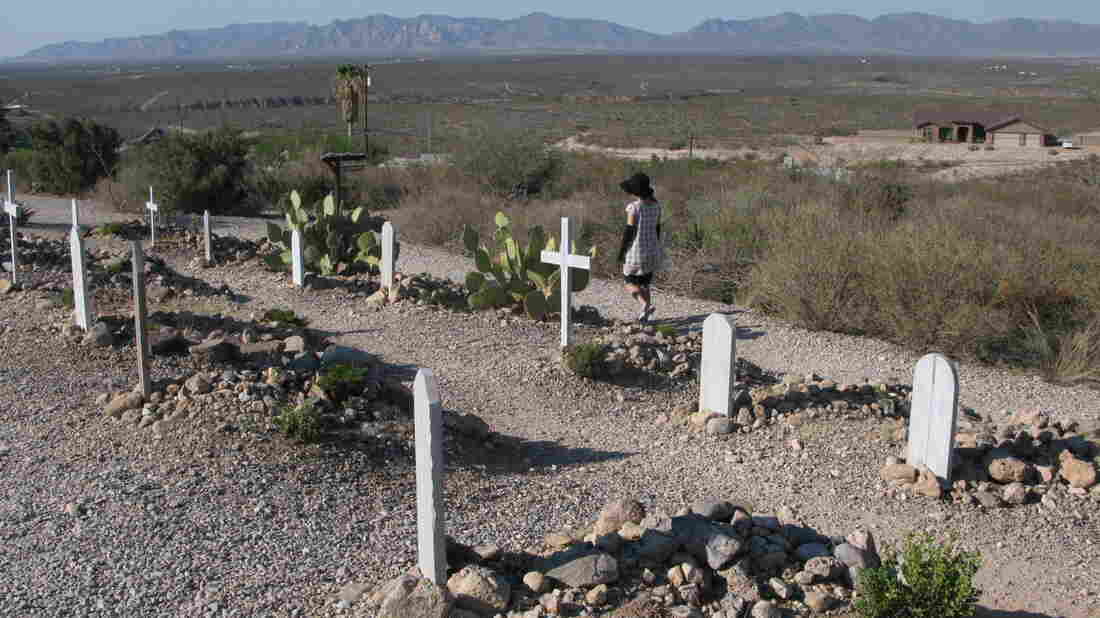 The Boot Hill cemetery in Tombstone, Ariz., is filled with the graves of men who met their end in the Wild West. While there are many such cemeteries in the Western U.S., Tombstone's is considered the most famous. Ted Robbins/NPR hide caption

If you're from a state once considered the "Old West," odds are you've heard of a Boot Hill graveyard. Turns out there are a number of Boot Hill cemeteries in the West, so named because many of their inhabitants died violently — with their boots on.

But of all the Boot Hill cemeteries, none is as famous as Boot Hill in Tombstone, Ariz.

It's a tough-looking place. No lawn, just gravel, mesquite trees and cactus. The graves are covered with stones to keep varmints from digging up the bones.

Boot Hill was open only from 1878 to 1884 — it took just six years to fill up with graves. Many of those graves are filled by persons unknown.

"Typically, what would happen when someone died was the mortician would put them on a cooling board in front of his office," Askey says. "And people customarily would walk by for two days to see if they could identify the body."

And then there's the unfortunate George Johnson, remembered with this inscription:

"Here lies George Johnson hanged by mistake 1882. He was right we was wrong. But we strung him up and now he's gone."

"He was stopped — they thought he'd stolen a horse," Askey explains. "So they strung him up and found out later he'd legally purchased it. So, there's George." 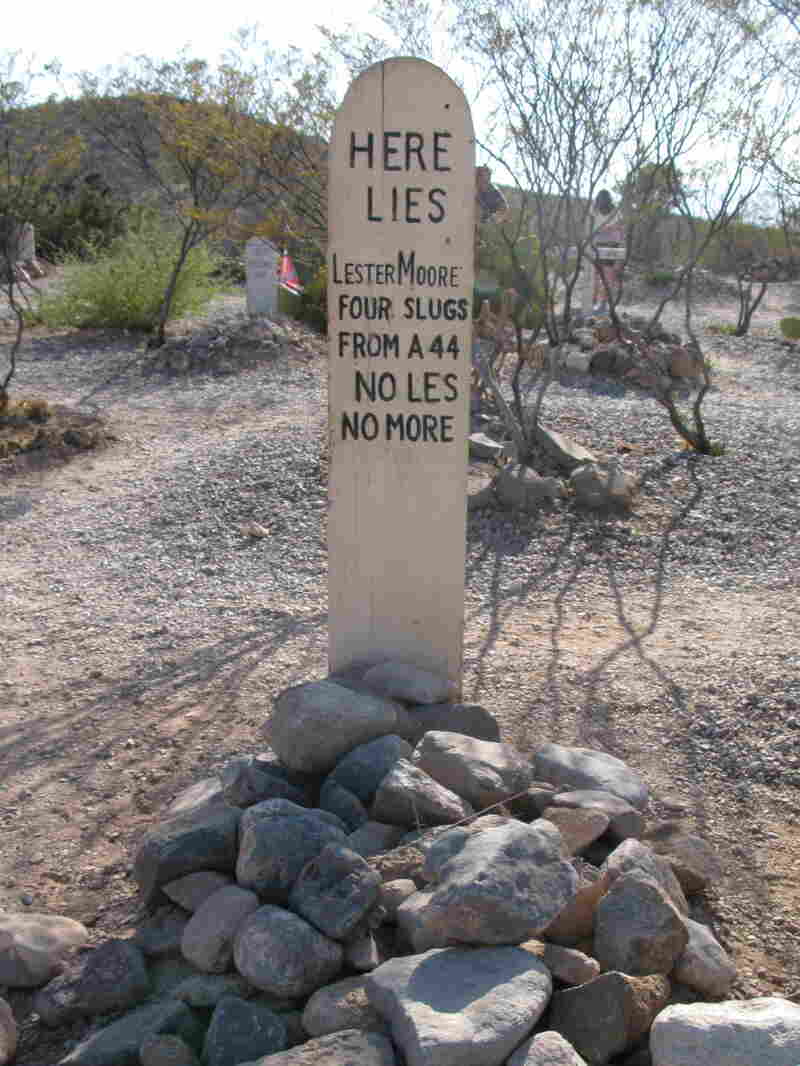 Johnny Cash immortalized the graveyard's most famous tombstone in the song "The Ballad of Boot Hill." Ted Robbins/NPR hide caption 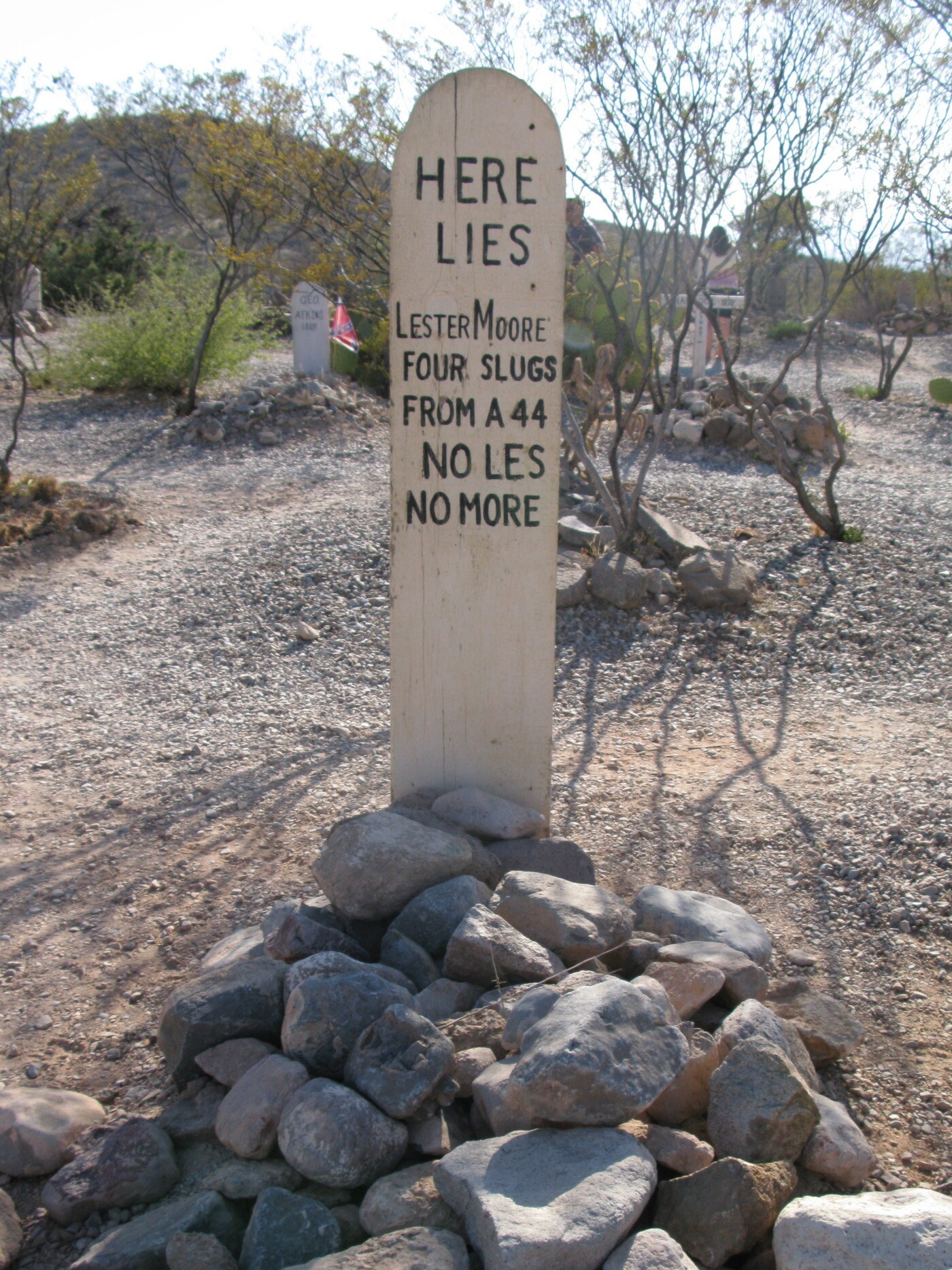 Johnny Cash immortalized the graveyard's most famous tombstone in the song "The Ballad of Boot Hill."

The wooden grave markers fade and decay, so the town of Tombstone replaces them from time to time. The town also sells T-shirts, posters and mouse pads of the graveyard's most famous epitaph: "Here lies Lester Moore. Four slugs from a 44. No Les. No More."

But while Les Moore's tombstone is famous, he's not one of Boot Hill's most notorious inhabitants. That honor goes to Billy Clanton and Tom and Frank McLaury, killed at the gunfight at the O.K. Corral on Oct. 26, 1881, Askey says.

That shootout, of course, has been featured in dozens of movies and TV shows, from John Ford's My Darling Clementine in 1946 to the 1993 film Tombstone. The fight is re-enacted daily near the actual site in town, and it's what brought Steve Napolitan from California to the gunfighters' graves.

"It's kind of rewarding for me, 'cause it's kind of a fulfillment from all the stories, and seeing the movies, and now seeing the real place," Napolitan says.

Last year, 146,000 people visited Tombstone's Boot Hill — which makes it a big municipal moneymaker. Admission is free, but visitors start at the gift shop. Boot Hill is probably the only graveyard that sells souvenirs and fudge made on the premises.

And it may also be the only graveyard with its own song performed by Johnny Cash, "The Ballad of Boot Hill," immortalizing Les Moore's epitaph in song.