Accessibility links
Germans Confront The Costs Of A Nuclear-Free Future Germany has announced plans for a total nuclear phaseout in 10 years and an ambitious transition to renewable energy. But one big challenge is distribution, and new power lines are planned. Opposition is growing among Germans who say the power-grid expansion will hurt their homes, land and lives. 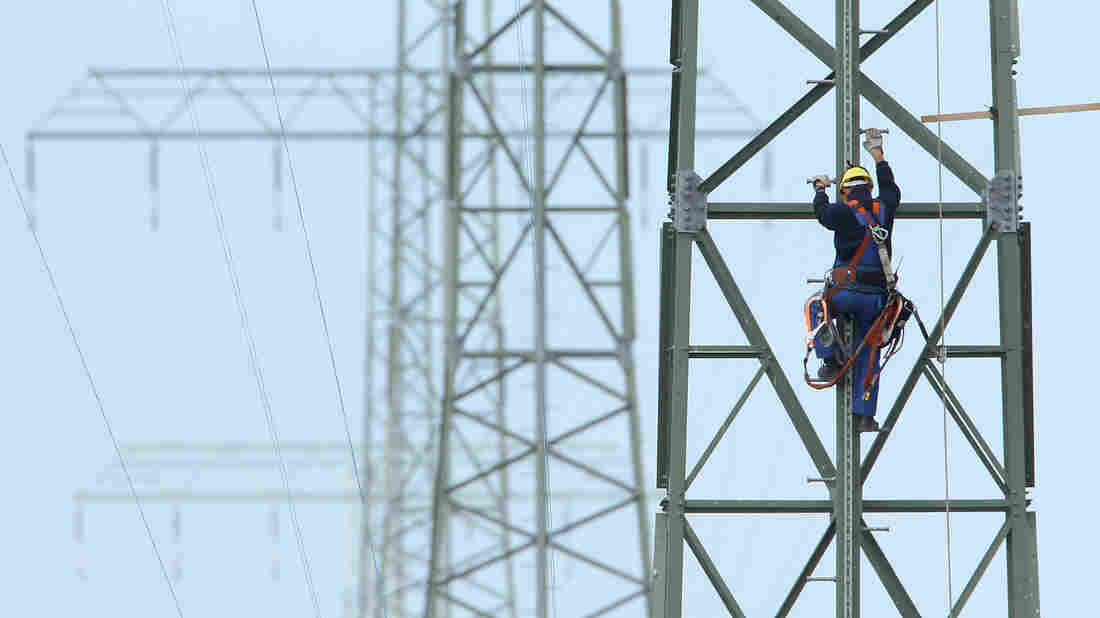 A worker on a newly constructed transmission tower near Buetzow, Germany, earlier this month. The German government plans to shut down nuclear power plants and is seeking to replace that production with power from renewable energy sources, especially wind turbines and solar parks. New power transmission lines will be needed. Sean Gallup/Getty Images hide caption

After Japan's Fukushima disaster last year, Germany announced a groundbreaking energy plan: It would phase out all of its domestic nuclear power in a decade and make a transition to safer, carbon neutral energy.

The goal is to have solar, wind and other renewables account for nearly 40 percent of the energy for Europe's largest economy in a decade, and 80 percent by 2050.

But already the revolutionary plan and its ambitious timeline are in doubt. There are deep concerns about rising energy costs, and some citizens are mobilizing against fast-track plans for an expanded power grid.

Horst Leithoff, a 57-year-old dairy farmer in the northern German village of Ellhoeft, was hoping for some July sun to harvest the hay in his fields. He got rainy, windy weather instead. 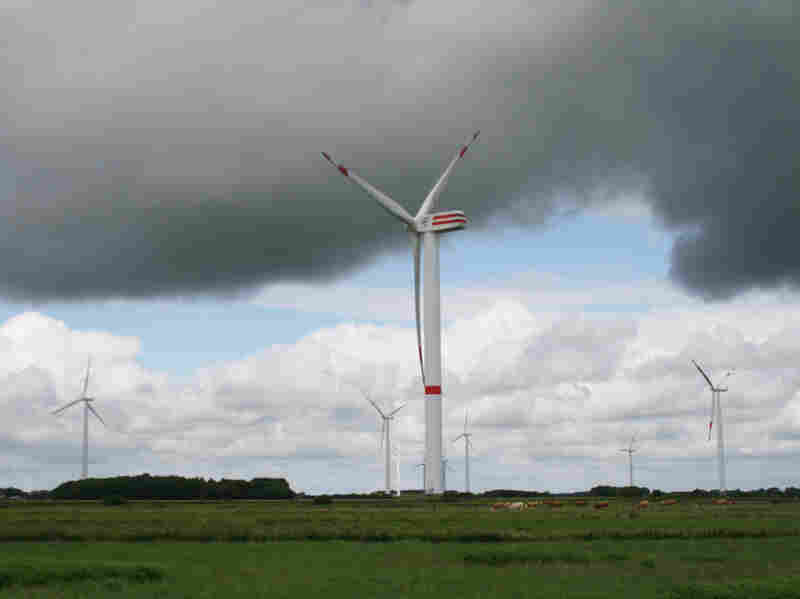 Wind turbines near Ellhoeft, in northern Germany, close to the Danish border. The challenge for Germany's new energy plan is how to transmit power generated in the north to the population centers in the south. Eric Westervelt/NPR hide caption 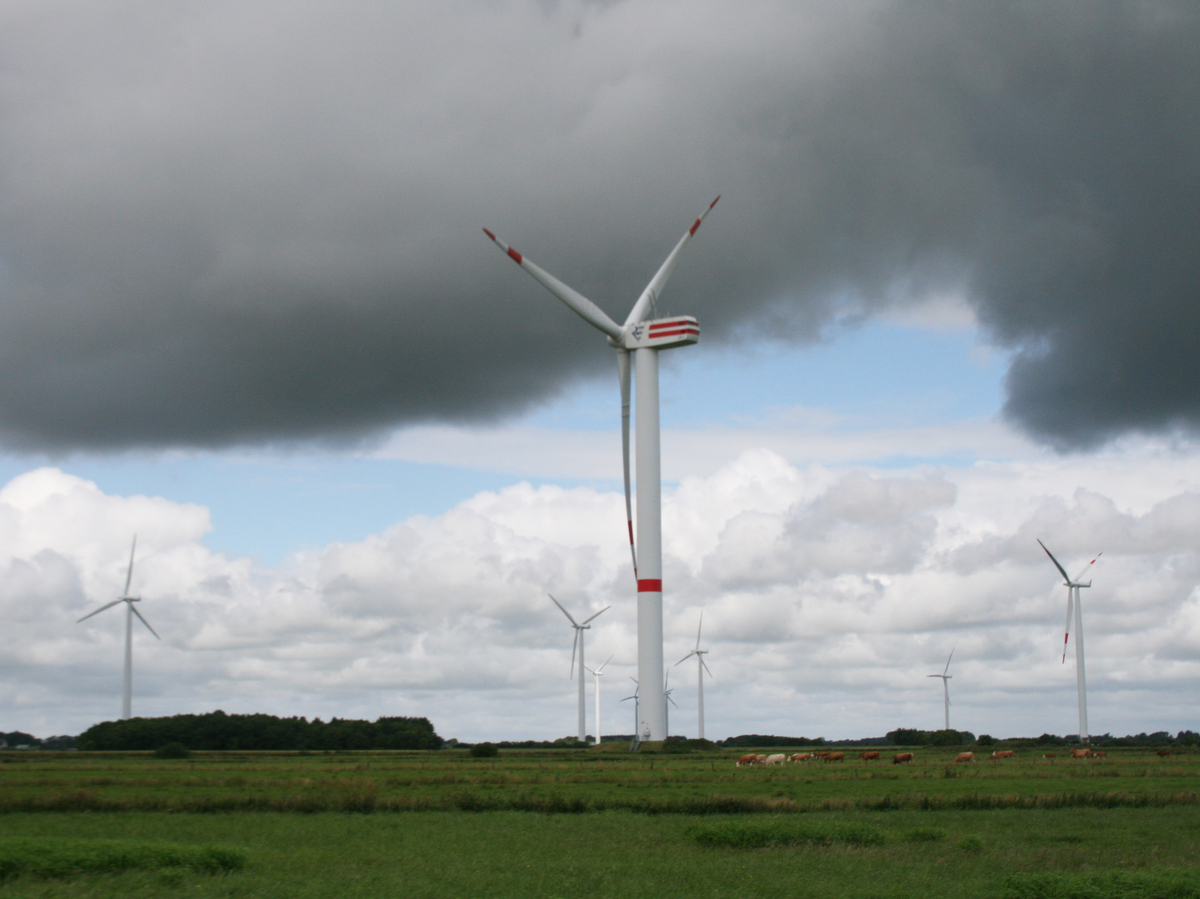 Wind turbines near Ellhoeft, in northern Germany, close to the Danish border. The challenge for Germany's new energy plan is how to transmit power generated in the north to the population centers in the south.

But that's OK with Leithoff, too. His other job is helping to manage four community wind farms in the North Frisia region near the Danish border. The massive, 500-foot-tall wind turbines have blades that weigh 22 tons apiece. Every rotation is marked by a rhythmic sound, like some enormous metronome.

This slice of northwest Germany is one of the country's best on-shore places to harvest the wind. And this northern state is rapidly expanding its wind production. But the problem today is transporting that energy — generated in this rural area — south to Germany's population centers.

"You have to invest in the grids," says Leithoff. "We need about 200 million euros to invest to collect the energy from the wind farms on the west coast to Hamburg. The capacity is not big enough. We need a better grid."

Expanding the north-south grid is essential if the country is to meet its target of phasing out German nuclear power and more than doubling its renewable energy in just 10 years.

But that plan for new high-capacity overhead lines is running into the familiar backlash.

Malte Graf lives in the village of Preetz in the picturesque northern state of Schleswig-Holstein. A field of waist-high wheat grows next to his house. A forest protected by the EU frames the field on two sides. By law, the new power lines can't go into the woodlands. They'd have to come through his field.

"Between these two forests are just hundred of meters for the fields," Graf says. "This electricity line has to cross this field, then they have to go directly over our houses. And that's a really big problem."

Graf lives with his wife and two kids, alongside his brother and his family. Graf runs a small business supplying horse farms. But he spends more and more of his time these days crusading against plans for an expanded power grid. He has posted signs, and printed pamphlets and bumper stickers. He holds monthly meetings, where attendance is growing.

Graf's neighbors are joining in his fight. Marco Franzen lives a few miles away. His home abuts rolling farmlands, fields where horses, cows and sheep graze. The Schwentine river flows nearby through a protected forest. Standing on a sloping field, Franzen whips out binoculars and points out an osprey flying low over the river.

"We built our house here 10 years ago. We've started a family, and the power lines are a threat to our very existence. We're worried about our kids' lives, their health," he says. "And we're financially invested in the area. We have a 30-year mortgage to pay off. If these power lines are built, and they rip up the natural environment and run through our houses, our quality of life will be ruined."

Franzen, a forestry conservation consultant, says he worries, too, about possible health risks including leukemia and lung problems. Numerous studies, however, have shown no significant health risks from power lines or discernible links to cancer.

The Price Of A Nuclear Phaseout

The rise of the "Not In My Backyard," or NIMBY, movement was perhaps inevitable. But if the German power giant TenneT has its way, opponents will not thwart the German dream of building a better grid to meet the nuclear phaseout goals.

A TenneT spokeswoman stresses that the planned route of new lines is not yet finalized. She adds that the company is working with citizens throughout the affected areas to hear their concerns.

But Graf, Franzen and many others in the north aren't convinced yet. Franzen says he's sounding a wake-up call to a public he says is just starting to realize the problems of more high-tension power lines stretching across the German landscape.

"Many city dwellers come here and think, 'Oh, how lovely,' and an hour later, they are back in the city, switch on their lights and think nothing more of it," he says. "We're the ones that have to live with electricity overhead. We are the ones who will have to deal with the daily strains. It's all well and good to build more wind farms, but we have to live with the power lines."

Back at the wind farm on the North Sea near the Danish border, former air force pilot Holger Arntzen says the future of renewable energy in Germany is bright — if people can adapt.

Arntzen is now project manager of Wind Comm, a nonprofit that supports wind farm development. For him, the key to stopping the backlash against the power lines is to do more to inform Germans that the nuclear phaseout comes with a price and changes in lifestyle.

"To show what is possible, and how I, as a citizen, can influence the load on the grid, like putting on my dishwasher only when the sun shines, because we have a lot of photovoltaics. Or waiting on my dishwasher if we have no wind," he says. "People must accept that the post-nuclear phase has a direct impact on how I live, how they live."

That may be a hard sell, even to the practical-minded Germans. The fact is, the post-Fukushima consensus in Germany has given way to growing concerns about rising energy costs. The debate is intensifying over just who will pay for the transition to renewable energy, how it will happen, how fast — and through whose backyards.