Accessibility links
Scorching Phoenix Plans For An Even Hotter Future The Arizona city already logs more days over 100 degrees than any U.S. city, and climate researchers predict Phoenix will grow hotter still in the coming decades. Planners are taking the projections seriously, and are looking for ways to adapt the city and its residents to a hotter, drier reality. 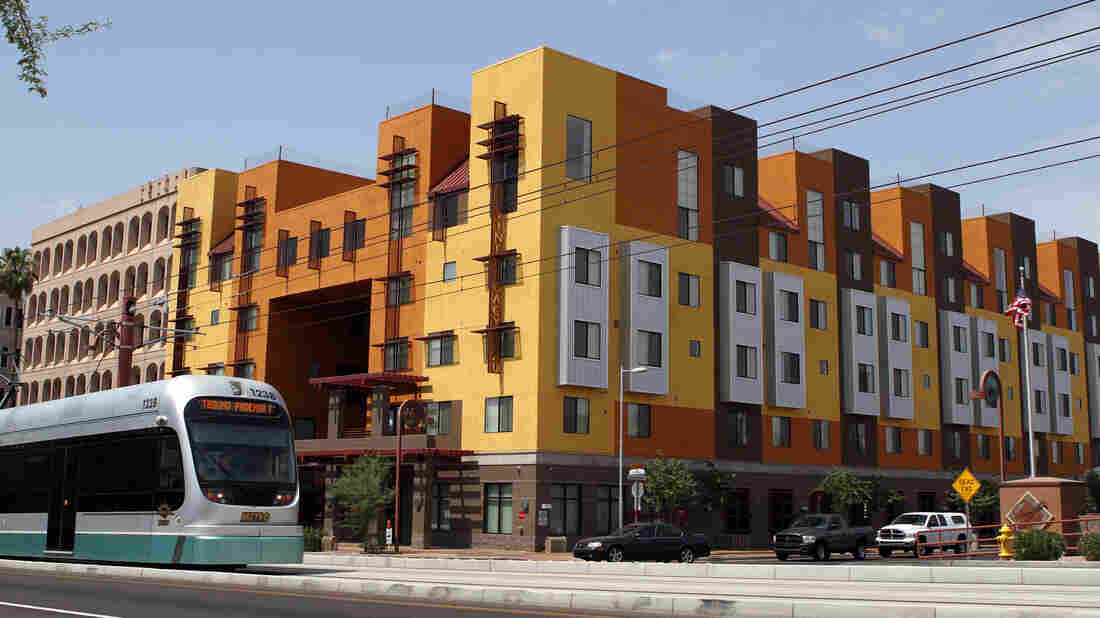 It's been a record hot summer in many cities across the nation. Phoenix is no exception. This Sonoran Desert metropolis already records more days over 100 degrees than any other major U.S. city. Now, climate models predict Phoenix will soon get even hotter.

A hotter future may mean a more volatile environment — and along with it, natural disasters, greater pressure on infrastructure, and an increased physical toll on city residents.

While some city planners around the country discuss ways to mitigate climate change, planners in Phoenix assume that change is already under way. Now, they are working to prepare the Phoenix metro area, and its approximately 4 million residents, for a new reality.

'How Are We Gonna Live Here?'

The view is bleak from John Larsala's front drive in West Phoenix. The tree in front of the house is dead, and the grass is dead, too. In fact, there's no grass at all anymore.

On a household income of $18,000 a year, Larsala can't afford the water charges required to keep his yard green. "All these trees are dying, because I can't put water on it," he says.

So Larsala's children and their friends play basketball in the barren yard. That is, until June comes around and the blazing Phoenix summer finally forces everyone inside. 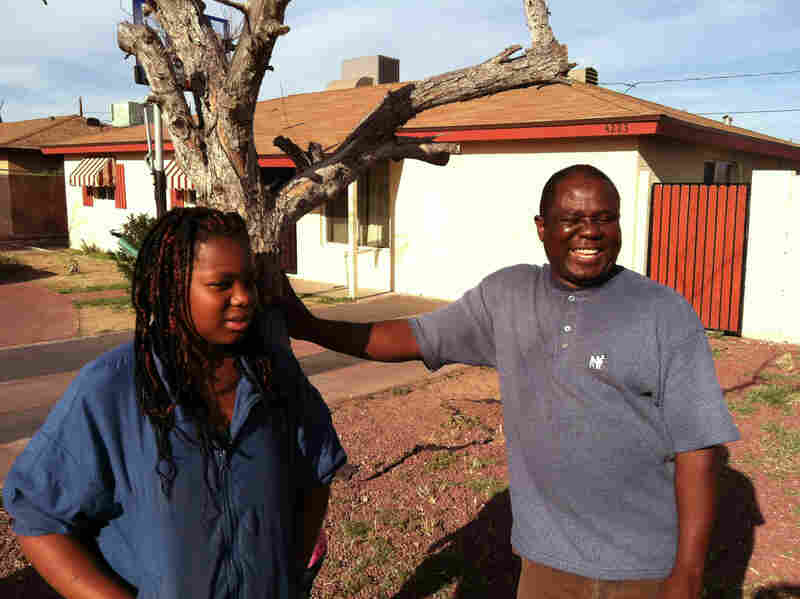 John Larsala struggles to keep his family cool during the Phoenix summer. The shade trees in his front yard have died because he cannot afford to water them. Peter O'Dowd/KJZZ hide caption 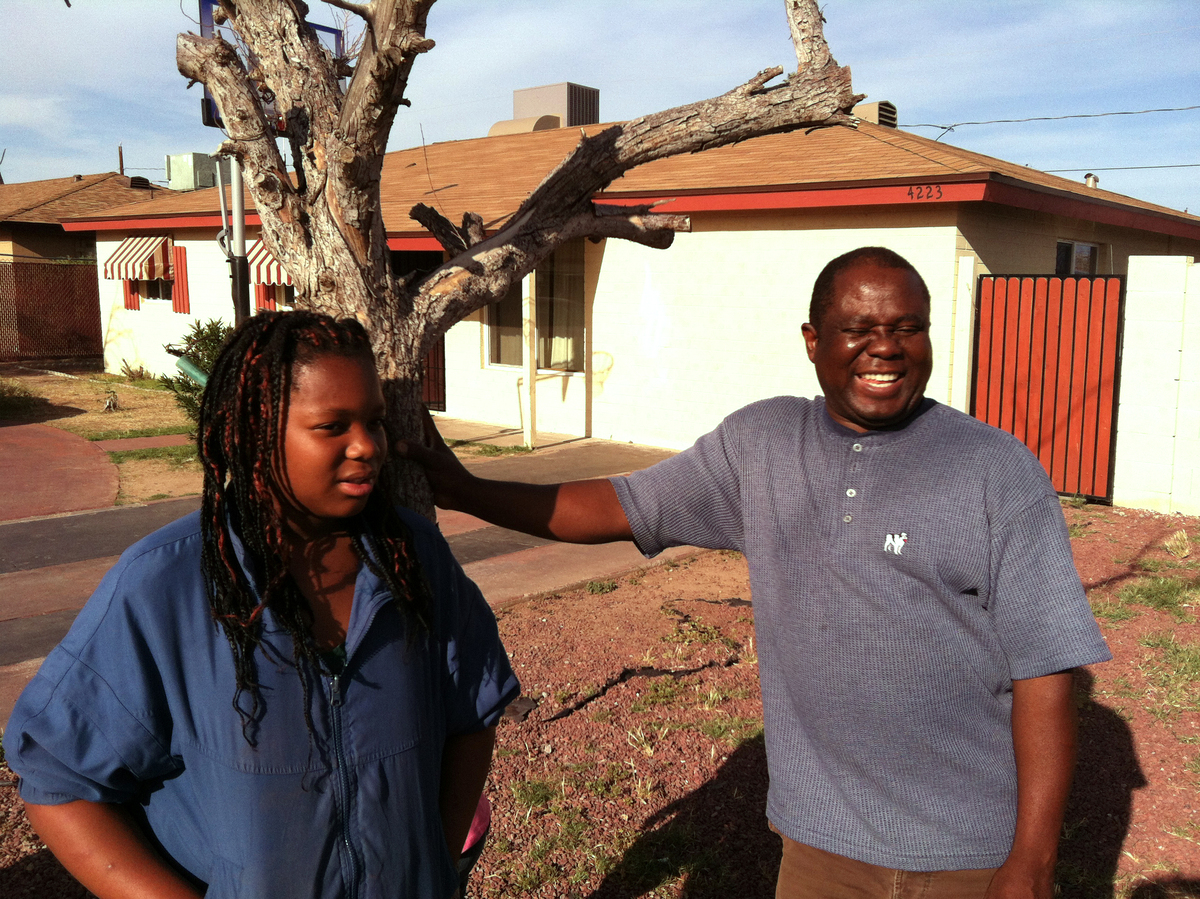 John Larsala struggles to keep his family cool during the Phoenix summer. The shade trees in his front yard have died because he cannot afford to water them.

For three months, Larsala will shut the doors and windows tight. To save money, he soaks his kids in a cool bath and delays using the air conditioning until just before bedtime.

When told that climate scientists predict the state will get even hotter in the future, Larsala is taken aback.

Phoenix actually suffers from two heat problems. One is a product of growth. Desert nights don't cool down they way they used to, because energy from the sun is trapped in roads and buildings, a phenomenon researchers call the "urban heat island effect."

As Phoenix grows, so does the problem, says Nancy Selover, the state climatologist.

"We keep thinking we'll probably see a night when we only get down to 100 as a minimum temperature, which is kind of shocking," Selover says.

Standing outside in a low-income neighborhood near Phoenix, Selover points out that many households here are using "swamp coolers," or evaporative coolers. These cooling units are cheaper than air-conditioning — but they're also less effective.

If Phoenix's temperatures rise, "it's going to be pretty unbearable," Selover says — and without adequate cooling, potentially deadly.

Data from the North American Regional Climate Change Assessment Program predict sustained heat waves above 114 degrees will be a yearly crisis in Phoenix by 2040. And each one, researchers project, will last a sweltering three weeks.

A Laboratory For What Works

Selover says these coming changes present Phoenix with an opportunity.

"As a desert city, Phoenix is kind of a laboratory for us to figure out what works and what doesn't work, to try to mitigate those things."

In the future, Selover says, "we may well have to live differently."

Now, city officials are starting to think about what that new lifestyle might entail. One idea is to cover 25 percent of Phoenix with shade trees.

But some, like architect John Meunier, argue for much greater lifestyle adaptations.

Meunier studies pre-industrial desert cities around the world, looking for lessons to apply in modern desert cities like Phoenix.

Sitting at a light-rail stop downtown, he says creating sustainable futures in cities like this one has "everything to do with managing without having to use a lot of extra energy and power."

To do that, Meunier says planners could encourage 10 times as many people to live around Phoenix's light-rail stations. Getting more use out of the system would take cars — and heat — off the street.

"It's crucially important. I mean, not being exposed to the direct sun's rays makes a great big difference," he says.

It's the way Phoenix has been built, Meunier says, that will make its residents vulnerable to rising temperatures.

"I'm not arguing that we should all live at a higher density," Meunier says. "What I am arguing is that there's a lot to be gained by having more of us live at higher density."

For Meunier's ideas to become reality, developers will have to make the choice to build differently.

Some of them already have. Take the city's light rail north about three miles, and you can get a close-up view of how buildings like Meunier envisions might actually work. 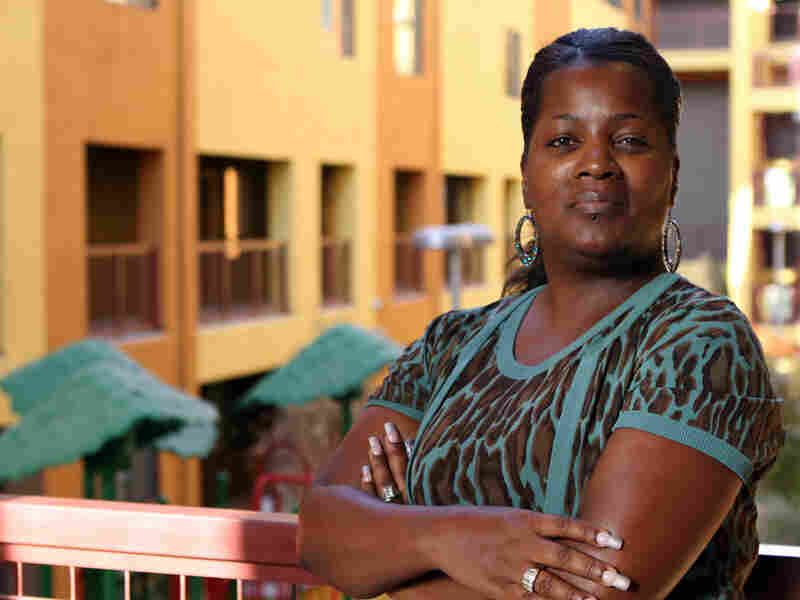 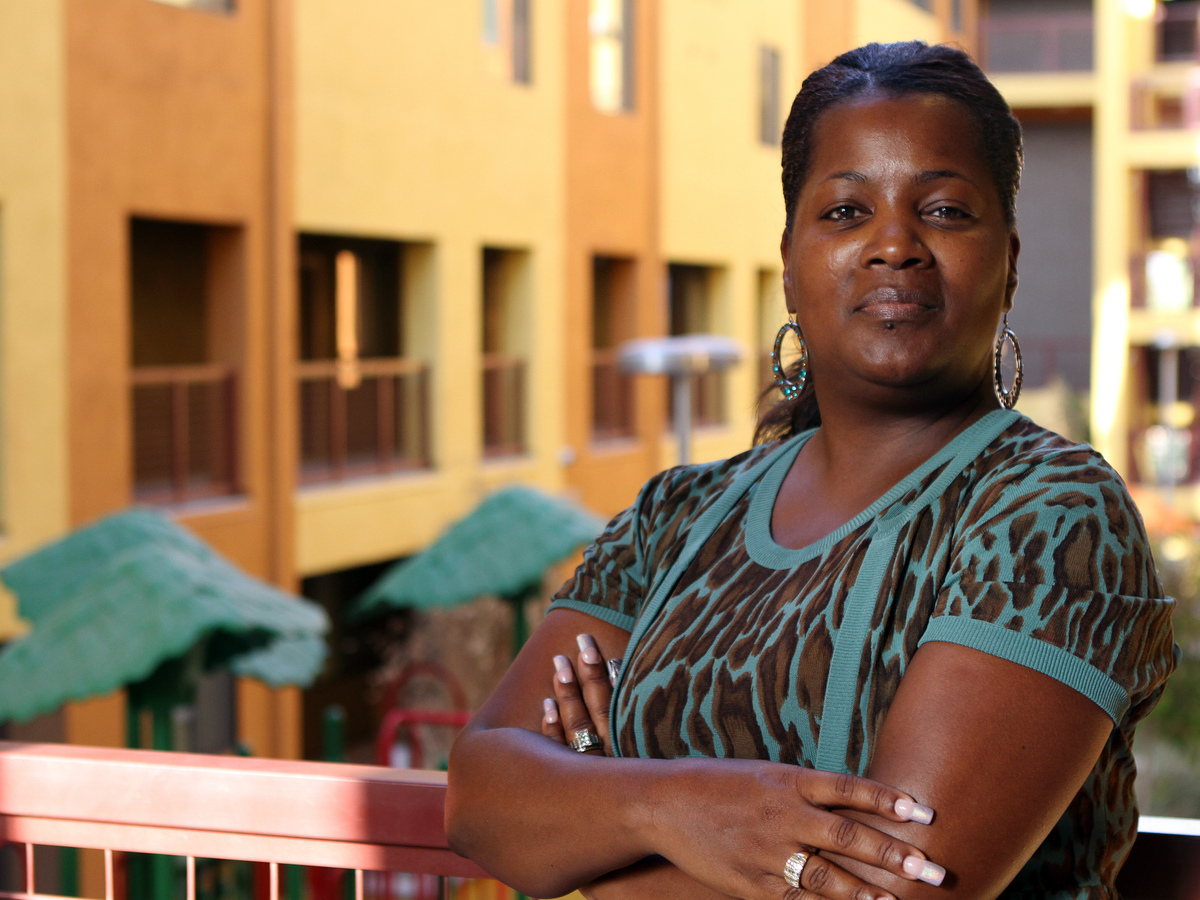 Felicia McMullen has lived in the energy-efficient Devine Legacy apartment building in central Phoenix since December.

The Devine Legacy is a housing complex designed for people with lower incomes. Right next to the rail line, every window is dual-paned, and the building is also superinsulated. Together, those features make a typical Devine Legacy unit 40 percent more energy efficient.

Walking through the front gate leads you to a courtyard. Four-story buildings rise up on either side of you. There's shade everywhere, and a breeze moves through the space. Even on a 113-degree day in Phoenix, it feels much cooler.

"Having a cool place to live is more important to me than food," says resident Felicia McMullen.

Before she moved here, McMullen says she was sick and stressed. She sometimes spent $300 a month to cool her suburban home.

Now, McMullen says, "I don't have that problem." Her last electric bill was $60 — and the stress is gone.

He considers the complex a small victory in what may someday be a more complicated effort to stay cool.

"People in extreme climates learn to live with it," Fonseca says. "And that's part of a resilient society."

Fonseca thinks a lot about this idea of resilience. He says it means that people who live in Phoenix must do more than try to solve the causes of escalating temperatures — they must also learn to withstand the changes as they happen.

Because, as Fonseca says, "We don't have a choice."