Accessibility links
Will Florida Seniors Accept Ryan's Medicare Vision? By adding Paul Ryan to the GOP ticket, Mitt Romney may risk turning off an important voting bloc: senior citizens. But while some Florida seniors are set against any big changes to Medicare, others are embracing Ryan's plan for reshaping the program. 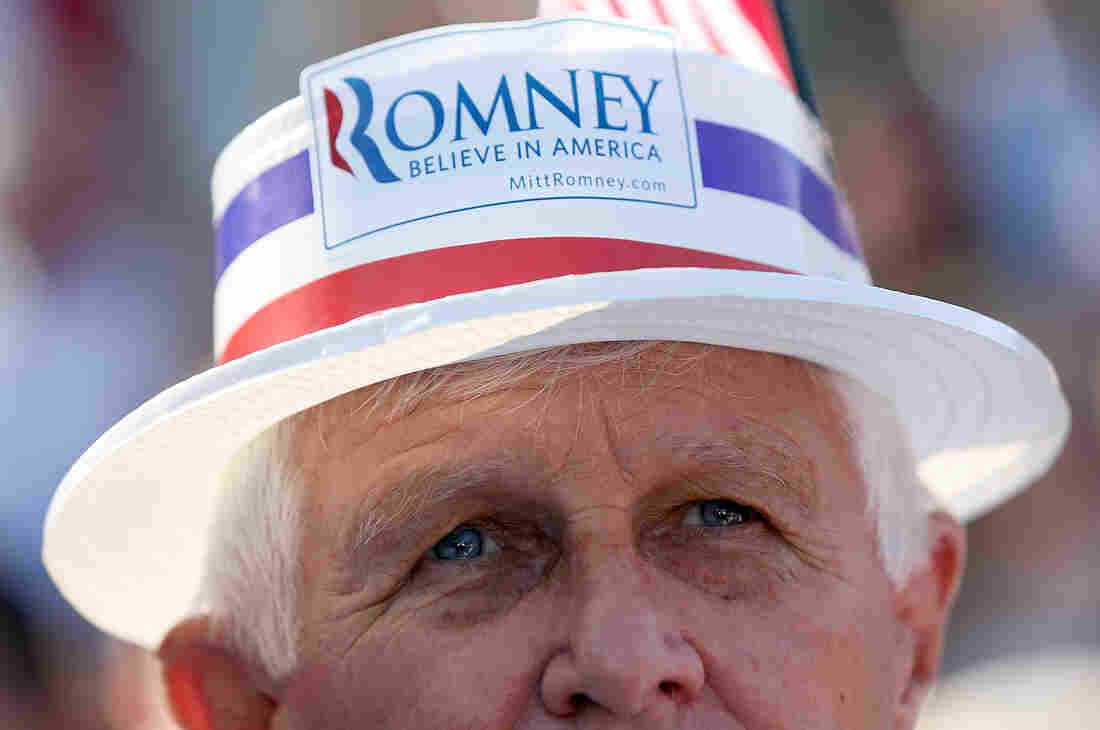 GOP presidential candidate Mitt Romney's choice of Rep. Paul Ryan of Wisconsin as his running mate may help energize support from conservative voters who like his tough approach to overhauling the federal budget.

But there's a risk that Ryan may turn off an important voting bloc: senior citizens.

Ryan has proposed transforming Medicare into a voucher-like program with fixed payments. That's an important issue for senior citizens. And in Florida, seniors will help determine who wins the state in November. Voters 65 and up make up about 18 percent of the state's population, but they are more than a quarter of the state's registered voters.

Around the state, you can find many in retirement communities like Wynmoor Village, a large over-55 community west of Fort Lauderdale with some 9,000 residents.

This part of Florida — Broward County — is a Democratic stronghold, with much of that strength coming from senior citizens in retirement communities.

Mikkie Belvedere runs a long-established Democratic club. She says she was already familiar with Ryan when Romney named him as his pick for vice president.

"Well, I felt, here we go. Here's a man who is looking to totally mess up the budget for senior citizens," Belvedere says

At the heart of Belvedere's concerns is how Ryan would change Medicare. He's proposed controlling the program's growth through an option that would cap payments to senior citizens and allow them to buy their health insurance on the private market.

Current senior citizens would be unaffected. Ryan's plan would only apply to people who now are under age 55. Marilyn Gerber, another Wynmoor retiree, says for her that makes little difference. She's still opposed to any big changes to the program.

"He's not going to do away with Medicare for seniors, but he will for Medicare for my kids and my grandkids," Gerber says.

But Gerber and Belvedere don't speak for all the seniors in Florida — or even in Wynmoor.

In another Wynmoor building, Carolyn Stricklen convenes a meeting of the community's Republican club. This club's been around for just four years. It was started by Sid Feldman, shortly after he retired to Florida after a long political career in Philadelphia.

"The first meeting that I held, I was approached by two older ladies. And they kissed me on either cheek and said, 'Thank you for letting me out of the closet,' " Feldman recalls.

At Wynmoor and other retirement communities throughout Florida, things are changing. Younger retirees, including many from traditionally Republican states, are changing the demographics and political outlook of Florida's senior citizens.

Seniors are an important part of Florida's large and active Tea Party movement. And there are many, like Andrea Bellito, who are thrilled with Romney's choice of Ryan.

Bellito even has a prediction: "The Romney-Ryan team is going to be called the dynamic duo, the new look of America, because that's what we need," Bellito says.

'Why Are You Scaring Me?'

Bellito and other Romney supporters at Wynmoor embrace Ryan's proposal to reshape Medicare — saying big changes are needed if the nation is going to rein in debt and avoid a fiscal meltdown.

But Feldman says for Romney and Ryan, overcoming Democratic scare tactics will be a major challenge.

"Tell me the truth," Feldman says. "Don't tell me stories. What are you going to do? I'm 79 years old. I can keep my Medicare the way it is. So why are you scaring me?"

University of Central Florida political science professor Aubrey Jewett says the potency of Medicare as an election issue is an old story in Florida. Although President Obama carried the state in 2008, Jewett says his opponent, Sen. John McCain, won the senior vote.

"One of the reasons was that they worried about cuts in Medicare because of the Obama reform plan that he was proposing. And, you know, this time around the shoe is potentially on the other foot," Jewett says.

While Obama and other Democrats attack their opponents for Ryan's Medicare plan, Romney and Ryan are firing back. They're accusing Obama of cutting Medicare himself to help pay for his health care plan.