Accessibility links
Feeling Just Wild About Wild Cards More wild-card teams in baseball? The more the merrier, says commentator Frank Deford, as it makes the playoffs that much more exciting. 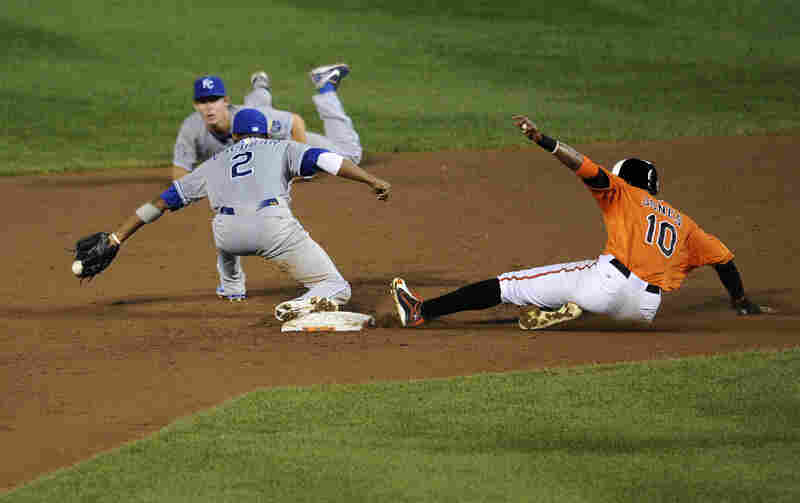 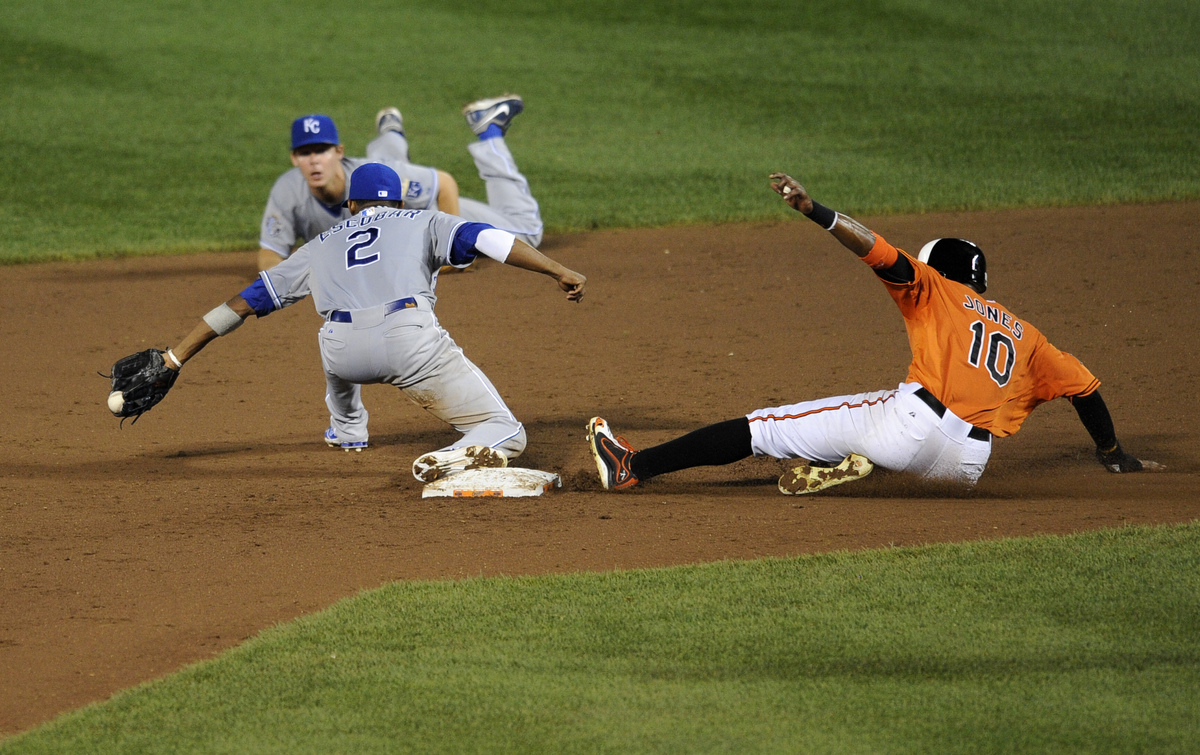 Baltimore Orioles center fielder Adam Jones is out at second against Kansas City Royals shortstop Alcides Escobar. Despite less-than-stellar statistics, the Orioles are contenders in the American League wild-card race.

Bud Selig, the commissioner of baseball, has persuaded his owners and the players to add an extra wild-card team to the playoffs, so now five teams per league will qualify.

Not only is this terrific for the fans, but Selig also wisely managed to make it so that the wild-card teams engage in a one-game showdown for the privilege of being the team that joins the three division winners in the battle for the league championship.

I have just the old-fashioned word for this newfangled development: nifty.

But, as we might expect, the diamond fundamentalists have thrown a conniption fit. It's simply not fair, not the American way, to play 162 games and then have your fate decided by one lousy itty-bitty game.

Well, here's the answer: While regular seasons in any sport are, by virtue of their great length, pretty fair, playoffs are not meant to be fair. They're meant to be popular.

These are games they're playing, my friends, not mathematical equations they're proving. If all playoffs did was validate the winner of the regular season, then what would be the point? For my money, it would be even better if there were even more playoff teams and more playoffs that were just one game, winner take all. It's more exciting, and the regular-season champion is rarely going to win anyway.

Look at this past year. The Cardinals won the World Series even though they didn't qualify for the wild card till the last day of the season. But then, in two-thirds of the years in this century, the World Series has included also-rans from the sanctified regular season.

Next, the Giants won the Super Bowl, even though they'd finished the regular season by a mere one game over .500. The Kings took the Stanley Cup as the eighth and worst seed in their conference.

The wonderful thing about team sport is that it is so dicey, that games are not decided by all those nerds who worship at the altar of statistics.

Look right now, for instance, at the Baltimore Orioles, who are prominently in the expanded American League wild-card race despite being ninth in the league in ERA, 10th in batting average and worst in all the majors in fielding. That is, they can't pitch, hit or pick up the ball.

They are not the beautiful orange and black bird of their name but, rather, a version of the yellow and black bumblebee, which in common myth, aerodynamically isn't supposed to be able to fly, but does.

So the Baltimore Bumblebees still win more games even though they're outscored, overall. You know what? So did the New York Giants last year score fewer points than their opponents in the regular season, but then they got hot and won the Super Bowl.

Hooray for wild cards and one-game showdowns and second chances. Playoffs are nifty.

Previous versions of this story stated that the Miami Heat basketball team was the best in the regular NBA season. That was incorrect — the Heat were, in fact, second in their own division and had the fourth best overall regular season record.