Accessibility links
For Undocumented Youth, New Policy Carries Risks The government began accepting applications Wednesday for "deferred action for childhood arrivals." The program allows qualified undocumented young people brought to the U.S. as children to study and work legally in the U.S. Many are applying, but the process is not without risk for some. 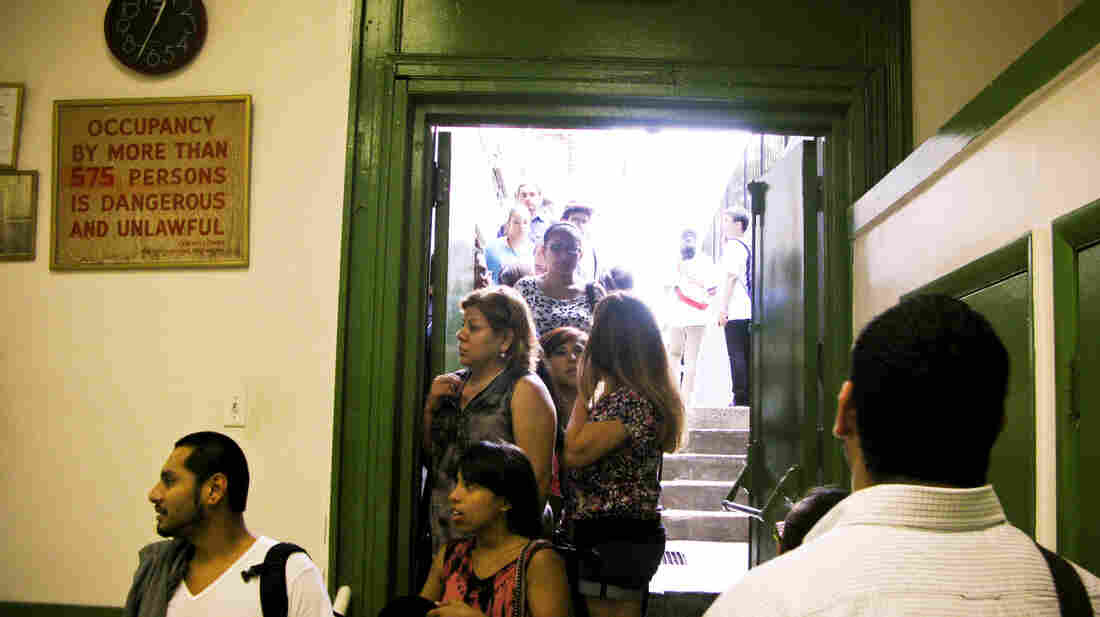 The U.S. government began accepting applications for "deferred action for childhood arrivals" Wednesday — a program designed to allow qualified young people to study and work in the U.S. openly.

On New York's Lower East Side, a line stretched around the block. Hundreds of potential applicants had shown up for free legal advice. Inside the church basement, dozens waited for help filling out their paperwork.

"Half of me is saying, 'OK, it's real,' " says Mubashar Ahmed, a college student studying chemical engineering. "The other one's asking, 'Is it real?' Now seeing it is actually believing it. Like, looking at all these people signed up to do it, I'm like, OK, this works."

Ahmed, 26, hopes deferred action will give him a chance at continuing his studies in the U.S., and at ultimately getting a job in his field. 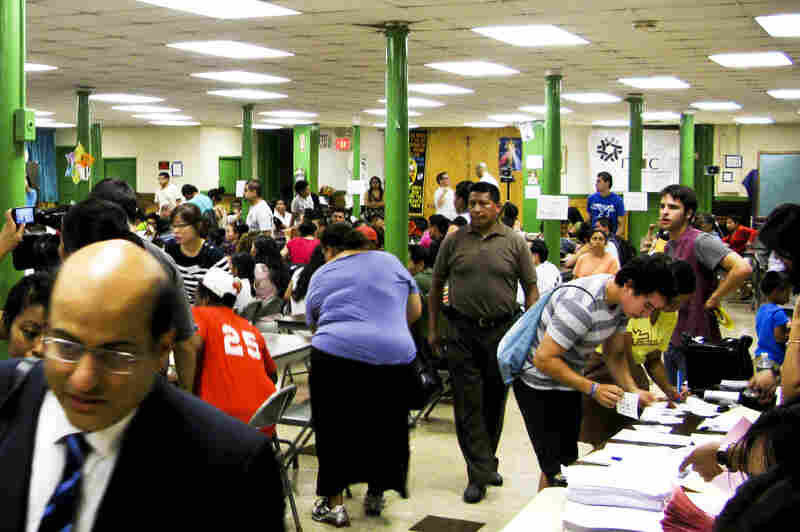 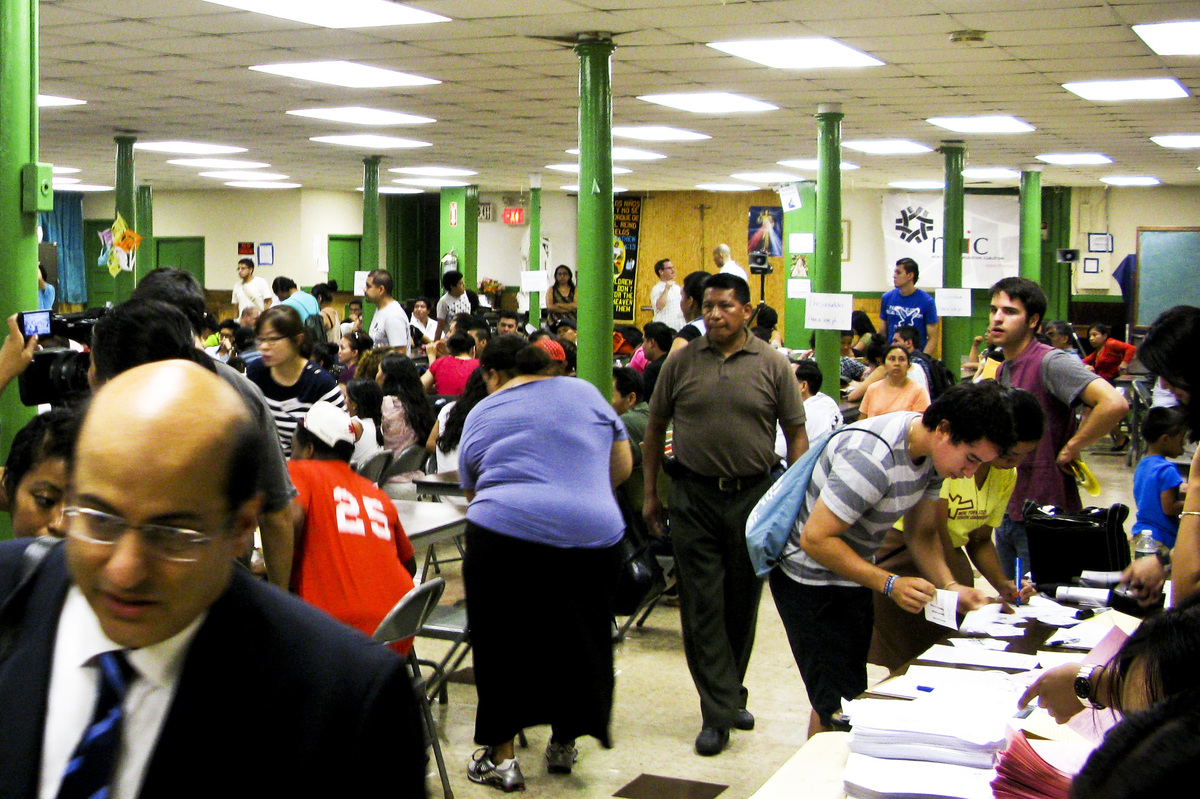 "For the first time, I know that I can do this over here, without having to give up on everything that I've worked on and all the people that supported me."

Ahmed is one of an estimated 110,000 potential deferred action applicants in New York state alone. Nationwide, more than 1.7 million people could sign up for deferred action.

What they're applying for is not permanent legal status — something advocates of the DREAM Act, which failed in Congress earlier this year, had been pushing for. Instead, applicants will essentially receive a promise from the federal government that they won't be deported for the next two years.

During that time, they can study and work legally.

At a press conference Wednesday, local lawmakers, including New York City Council speaker Christine Quinn, urged Congress and the president to do more.

"This is a great day," Quinn said. "It's a great step forward. But it is not enough. We want to make the DREAM Act no longer the DREAM Act — that it is the law."

In the meantime, Quinn urged New Yorkers who are eligible to sign up for deferred action. Still, despite the lines in the Lower East Side today, not everyone is rushing to apply.

"There's obviously huge fear," says Muzaffar Chishti, director of the New York office of the nonpartisan Migration Policy Institute. Chishti says many potential applicants are worried about coming out of the shadows — because anyone who applies for deferred action but gets rejected will have told the government a great deal about themselves.

"So it's a big risk," Chishti says. "And since there's no guarantee in this program that just because you apply that you will get the benefit, it's a cost-benefit analysis, which every individual will have to frankly make themselves."

Those risks may be most serious for people who've had a brush with the law. The Obama administration was careful to limit the deferred action program to those with no felonies or serious misdemeanors on their records. But that has not been enough to placate the administration's critics.

Roy Beck, president of NumbersUSA, a nonprofit that advocates for lower immigration levels, says the program puts Americans at a disadvantage.

"Unemployed Americans are now going to have about maybe 1.8 million more people added into the legal workforce, to compete with them for a limited number of jobs," Beck says. "So there's a cost to this. And the cost is to the most vulnerable young Americans."

A Program With An Uncertain Future

Critics also accuse the Obama administration of circumventing the will of Congress to change the country's immigration policy — and pandering to Latino voters in an election year.

It's not clear what would happen to the deferred action program if Republican presidential candidate Mitt Romney is elected in the fall. That worries many potential applicants, including Nathalia Narciso of New York. Even so, she's planning to sign up for deferred action.

"When people ask me about this, I always let them know, 'Just remember that they could take this away at any moment,' " Narciso says. "I'm worried, but at the same time, it's a risk that we've got to take. And I'm willing to take it."

Judging by the lines for legal help at St. Mary's Church, a lot of potential applicants may come to the same conclusion.