Accessibility links
Movie Review - 'Chicken With Plums' - In Tehran, A Vivid Parable About The Ends Of Things The creators of Persepolis return with a live-action fable about an Iranian violinist who wills himself to die — and the heartbreaks that drive him to it. (Recommended)

In Tehran, A Vivid Parable About The Ends Of Things

In Tehran, A Vivid Parable About The Ends Of Things 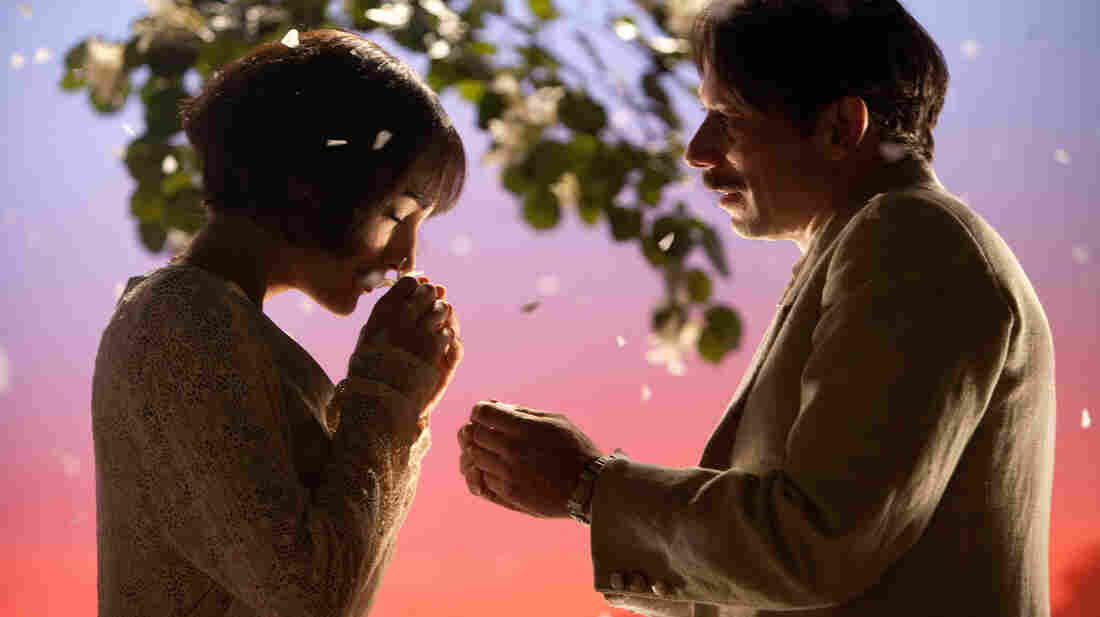 Irane (Golshifteh Farahani) is the one who got away from violinist Nasser Ali (Mathieu Amalric) — and her loss consumes the musician in Chicken with Plums, a new film from Marjane Satrapi and Vincent Paronnaud. Patricia Khan/Sony Pictures Classics hide caption

In English and French with subtitles

A parable of art and love, and a political allegory to boot, Chicken with Plums centers on an Iranian musician who wills himself to die. Yet the story that then unfolds, mostly in flashback, could hardly be more vital and engaging.

The movie was adapted by Marjane Satrapi and Vincent Paronnaud from the former's graphic novel. The same team brought Satrapi's earlier book, the autobiographical Persepolis, to the screen with animated renderings of Satrapi's drawings. For this tale, which is based on a Satrapi family legend yet has wider implications, the duo largely forgoes the graphic approach in favor of live action.

From 'Chicken with Plums' - 'Seeing Irane'

From 'Chicken with Plums' - 'Someone Broke My Violin'

'Someone Broke My Violin'

The narrative, which nests stories within stories, does incorporate a few hand-drawn or CGI-generated episodes. And the other scenes, filmed on sets at Germany's Studio Babelsberg, are far from naturalistic. In appearance, the movie recalls Amelie or Hugo, but with a shadowy, sepia-toned palette. Its storytelling style is playful and self-conscious, with magically unrealist touches.

A former concert violinist, protagonist Nasser Ali chooses to perish early in the movie, which then circles back to explain his despair. Not even the title dish, his favorite meal, can lure him from his self-made appointment with the angel of death. In fact, the story is narrated by that very figure: horned and black-shrouded Azrael (Edward Baer).

The inspiration for Nasser Ali's death wish is twofold, although that's not immediately obvious. At first, it seems that the only cause of his anguish is the loss of a long-beloved violin, which was recently broken.

Even a Stradivarius, acquired after an arduous journey that includes an opium trip, fails to satisfy Nasser Ali. Without his original instrument, it seems, the musician can never again perform to his own expectations. So he resolves to waste away.

As Nasser Ali waits a week for oblivion, flashbacks and asides deepen our understanding of the man, embodied by Mathieu Amalric with his usual flair for playing neurotics who are roughly as likable as they are irritating. 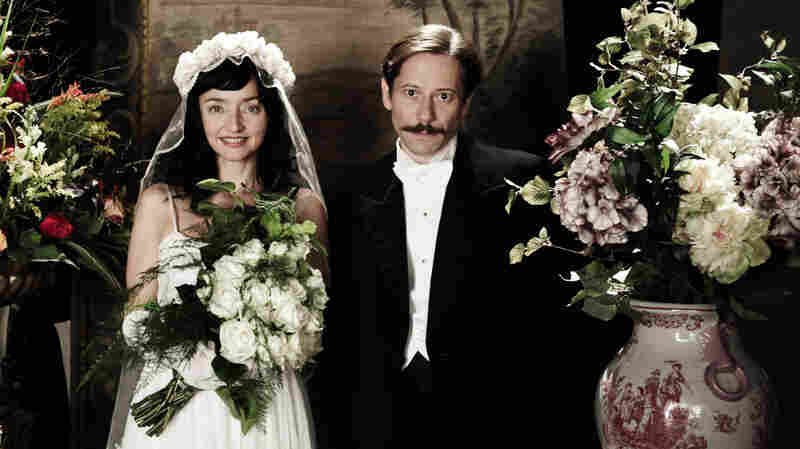 When he returns to Tehran after his touring days are over, Nasser Ali is pushed by his mother into a marriage with a woman (Maria de Medeiros) he doesn't love. Patricia Kahn/Sony Pictures Classics hide caption 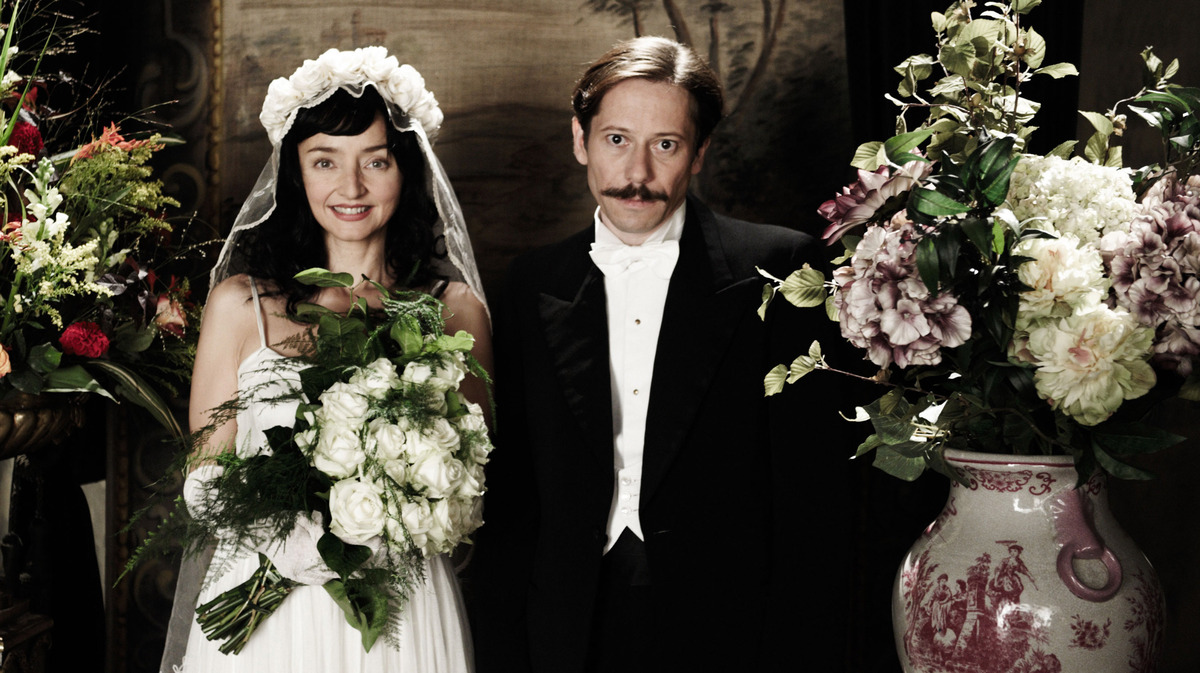 When he returns to Tehran after his touring days are over, Nasser Ali is pushed by his mother into a marriage with a woman (Maria de Medeiros) he doesn't love.

Nasser Ali's struggle to become a great violinist, we'll come to understand, has been painful, and his international success as a musician short-lived. Returning to Tehran, he's forced by his chain-smoking, charmingly overbearing mother (Isabella Rossellini) to marry Faranguiss (Maria de Medeiros), a math teacher who has long adored him. He doesn't love her, and subsequently doesn't much care for the two children they produce. (The movie has it in for the kids as well, lampooning them in flash-forwards to their adult lives.)

Eventually, we learn that the neglected Faranguiss has done something unforgivable. But as we get to know her, we also come to see that she means well and is far more than simply the nagging, bourgeois wife that Nasser Ali resolves to escape by dying.

Both Nasser Ali and Faranguiss are tormented, in different ways, by the specter of Irane (Golshifteh Farahani), the woman the violinist once desperately wanted to marry. Irane's time on screen is brief, but the influence of the sundered romance touches every aspect of Nasser Ali's life. (The obsessiveness of his passion is underscored with a clip from the 1925 film Phantom of the Opera.)

As her name suggests, Irane also represents something else that has been lost: the pluralistic, Western-friendly country destroyed by the Islamic Revolution 21 years after Nasser Ali's farewell chat with Azrael. Thus Chicken with Plums is as much about culture as about love and family. To be true artists, the film muses, perhaps violinists — and graphic novelists — need the national equivalent of a room of their own. (Recommended)