Accessibility links
Out-Of-The-Ordinary Animation In 'ParaNorman' From the studio that produced 2009's Coraline, ParaNorman is a fun, funny throwback to classic stop-motion animation. The movie staggers a bit under the weight of its many characters and plot twists, but the zombie-filled antics are held up by great character design. 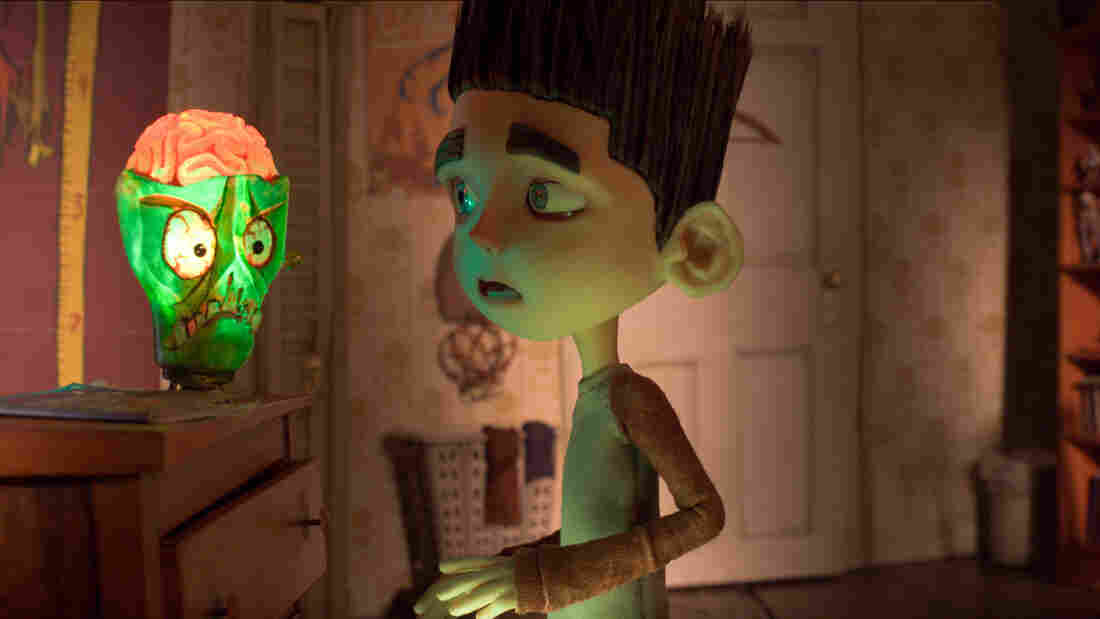 Norman (voiced by Kodi Smit-McPhee) can hear the voices of the dead — which puts the pint-sized outcast in a position to save his town when zombies arrive. LAIKA/Focus Features hide caption

Even if most fans of hand-drawn animation have made peace, to a degree, with digital technology, the pleasures of old-school stop-motion animation are still rare and precious. There's something elemental about watching a movie that's been made by moving small figures around and filming them, frame by frame; even though there's always some digital technology involved in the making of a contemporary stop-motion film, the human touch always sings through the finished product.

That's certainly the case with Sam Fell and Chris Butler's ParaNorman, the story of a misfit New England kid who hears the voices of the dead — and who finds himself having to appease a group of zombies who, in their incarnation as human beings some 300 years ago, were responsible for sentencing a young "witch" to death.

Norman (whose voice is provided by Kodi Smit-McPhee) feels out of place everywhere: At school he's tormented by brainless, oversized bully Alvin (Christopher Mintz-Plasse, aka McLovin'). At home his bubblehead sister (Anna Kendrick) wants nothing to do with him, and his father (Jeff Garlin) grouses about Norman's love for zombie movies and the fact that he insists he can communicate with his dead grandmother, voiced by Elaine Stritch; Norman can see her, as we can, sitting grouchily on the family sofa, working away at a piece of knitting.

Norman's mom (Leslie Mann) feebly tries to defend her son, claiming that he's "sensitive." Dad is having none of it: " 'Sensitive' is writing poetry and being bad at team sports," he claims. In his eyes, Norman is something worse than a sensitive kid: He's a weirdo.

Norman, it turns out, has the ability to save his town, even if its miserable, insecure inhabitants don't exactly deserve saving. Of course, you've heard this one before: The story ParaNorman tells isn't a new one, and it doesn't have to be. (Butler, in addition to co-directing, wrote the script.)

But the movie is packed with too many characters and weighed down by superfluous plot details — the storytelling keeps wriggling out of Fell and Butler's grasp. That drains some of ParaNorman's potentially supernatural powers; it isn't nearly as enjoyable as Henry Selick's 2009 shivery work of genius Coraline, which, like ParaNorman, was produced by LAIKA, a collective of filmmakers, designers and animators working in 2-D computer-generated and stop-motion animation. (Butler served as a storyboard supervisor on Coraline.) 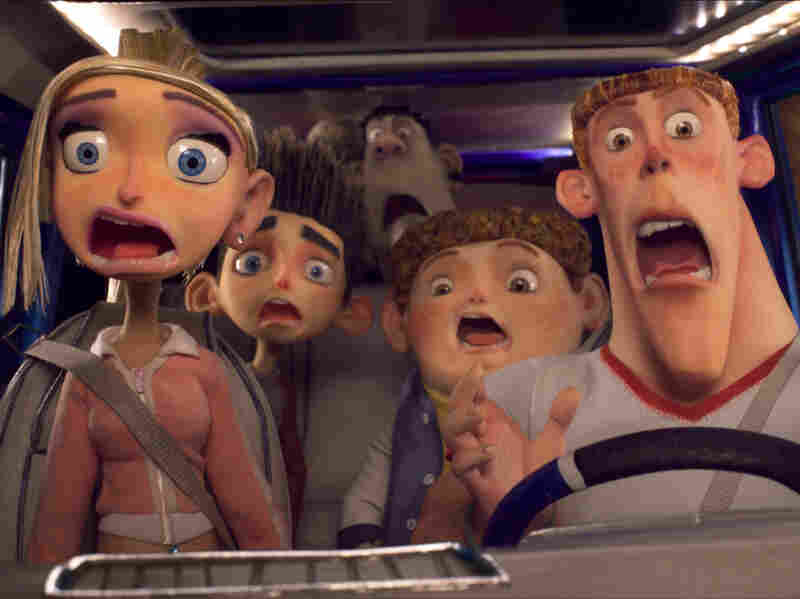 The zombies — and an ancient witch's curse — make the town a treacherous place for Norman and his family, friends and enemies. LAIKA/Focus Features hide caption 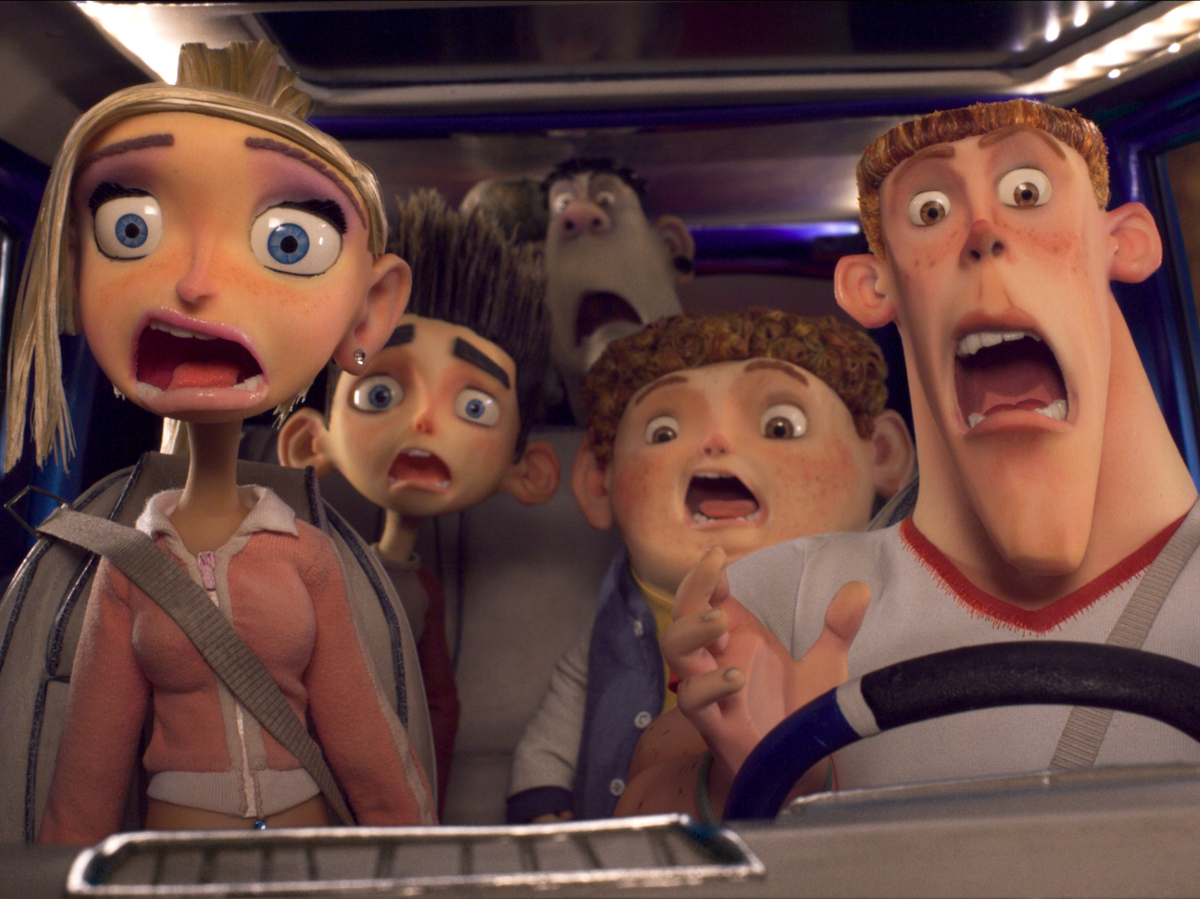 The zombies — and an ancient witch's curse — make the town a treacherous place for Norman and his family, friends and enemies.

Yet in terms of its overall design and execution, ParaNorman doesn't disappoint: Even when the story goes all noodly, there's always something to look at, some detail or visual gag that tickles or delights. Norman is a beautifully designed character, a wispy kid with wheat-grass hair and sugar-bowl ears — he looks like an exceedingly depressed Jared Leto rendered in miniature. The bags under his eyes speak of heavy thoughts and sleepless nights; his special gifts are more like a sack o' woe.

The town's forefather-zombies are similarly sympathetic: They limp through the streets looking for salvation, not trouble, dragging parts of their rotting carcasses behind them. Their eyeballs bulge; their mouths hang open helplessly. The living misunderstand them completely, pursuing them with guns, cutlery and even toilet plungers.

Indeed as pleas for tolerance go, ParaNorman is a wickedly funny one. And its climactic moment is both gorgeous and terrible, a ghostly howl of disappointment and grief that, thankfully, settles into a shimmering, translucent sense of peace and well-being.

The spirit of great stop-motion animators like George Pal and Ray Harryhausen lives on in ParaNorman, and not just as a ghost: It's so real you could almost reach out and touch it.