Accessibility links
Raising Romania's Orphans, Several Boys At A Time Florin Grosuleac has raised more than 60 orphaned boys in his small apartment in Bucharest. In a country where children are too often abandoned, Grosuleac has devoted his life to taking them in. 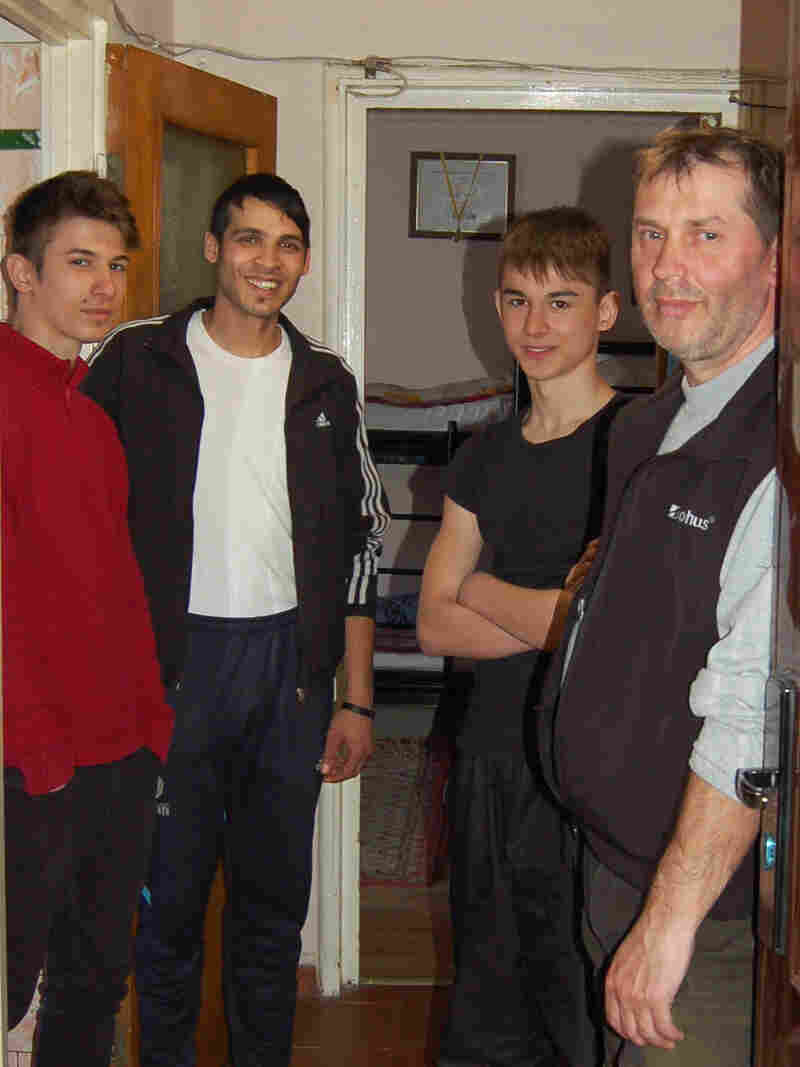 In Romania, a country with many abandoned children, Florin Grosuleac (right) has taken care of more than 60 boys over the past 13 years in his small apartment in Bucharest. Three of the boys currently living with him are (left to right) Emanuel, Dragos and Samuel. Meghan Collins Sullivan for NPR hide caption 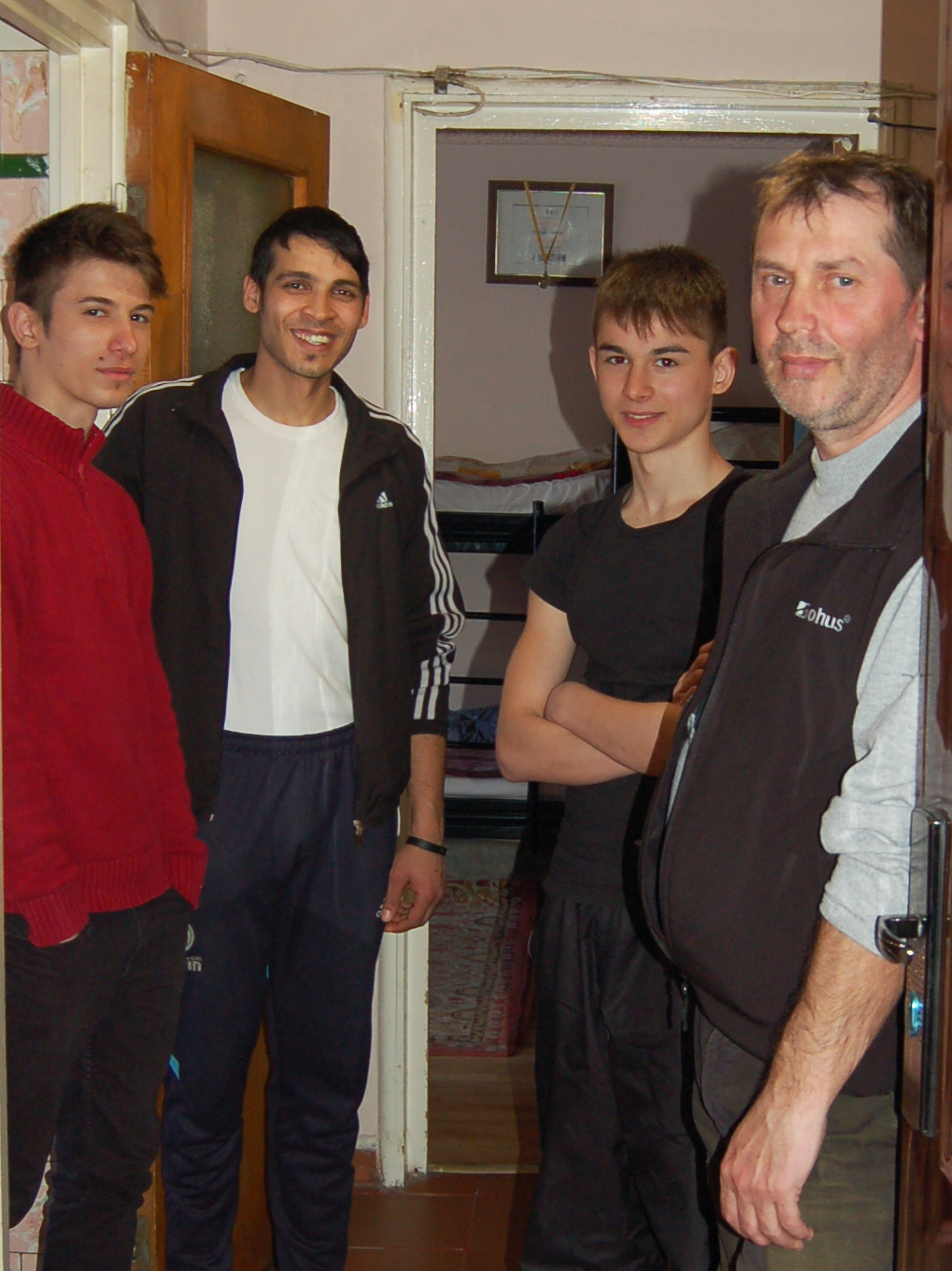 In Romania, a country with many abandoned children, Florin Grosuleac (right) has taken care of more than 60 boys over the past 13 years in his small apartment in Bucharest. Three of the boys currently living with him are (left to right) Emanuel, Dragos and Samuel.

They are among more than 60 boys who have grown up here, in the Berceni section of Bucharest, Romania, under the tutelage of 45-year-old Florin Grosuleac. Known as Good Shepherd, the single-apartment home was founded by Grosuleac 13 years ago and is one of a handful of private houses for abandoned boys across the city.

For a lucky few, Good Shepherd has offered an alternative to state-run orphanages or, more likely, the streets — a fate Grosuleac himself endured.

"I used to be like this — an abandoned child. I was left behind by my mother. My father took me in later," Grosuleac says. "My mother would drop me off on Monday and pick me up on Friday evening for years until, one day, she just didn't show up."

Grosuleac decided to leave the orphanage for the streets in hopes of finding his father.

"But until my father came, I went through all this struggle of surviving as a kid on the streets. I would beg and steal and fight for a piece of bread," he says. "It's a Romanian story."

The tragedy of Romania's orphans came to light shortly after the 1989 fall of communist dictator Nicolae Ceausescu, who had largely closed off his country to the outside world. With Ceausescu gone, images of destitute children overflowing from decaying orphanages flashed across television screens around the world.

For 10 years, prospective parents from the U.S., Canada, Europe and elsewhere flocked to Romania in hopes of adopting one of these children. But in 2001, Romania put a moratorium on foreign adoption and ended it all together four years later.

Today, more than 70,000 children fall under the care of Romania's Department of Child Protection, though many working in child welfare say there are tens of thousands more on the streets.

Grosuleac's goal, he says, has been to find these "lost boys" and help them, at least, survive. He aims not only to provide food and shelter, but also to teach life skills so they can make it on their own.

"In the beginning, I went on the streets," he says. "I found the kids on the streets doing drugs. ... The hardest thing I have had to do is convince these boys they need help, because in the past they didn't realize they need help. They wanted to be on their own."

The four-room apartment has two bedrooms, a kitchen and an office. It has housed as many as 12 boys. Seven live here now, including Grosuleac's two biological sons, who are now in their 20s.

Four are in one small bedroom and three are in the other — sleeping on strategically arranged bunk beds. Grosuleac sleeps on a small bed in the office. 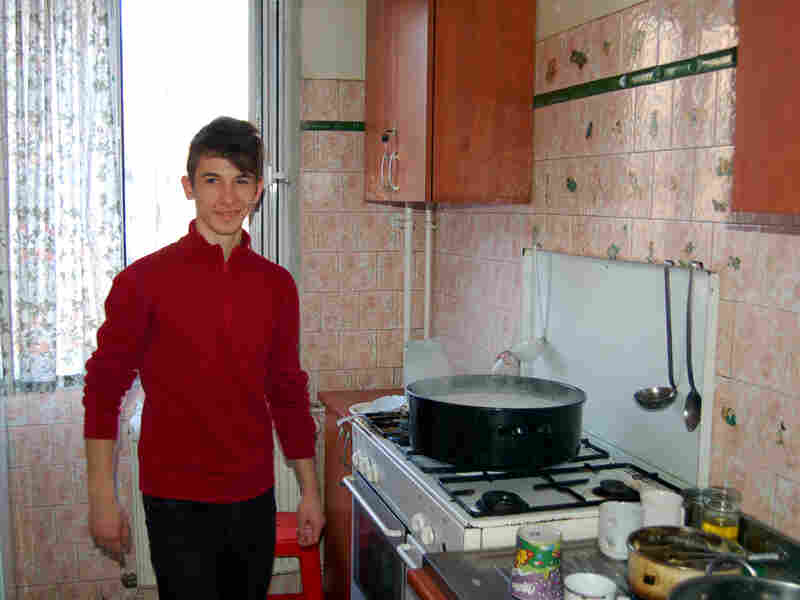 Many Romanian kids who grow up in orphanages lack life skills when they leave the institutions at age 18. At Grosuleac's home, boys go to school, get jobs and do household chores. Here, Emanuel prepares a rice dish for dinner. Meghan Collins Sullivan for NPR hide caption 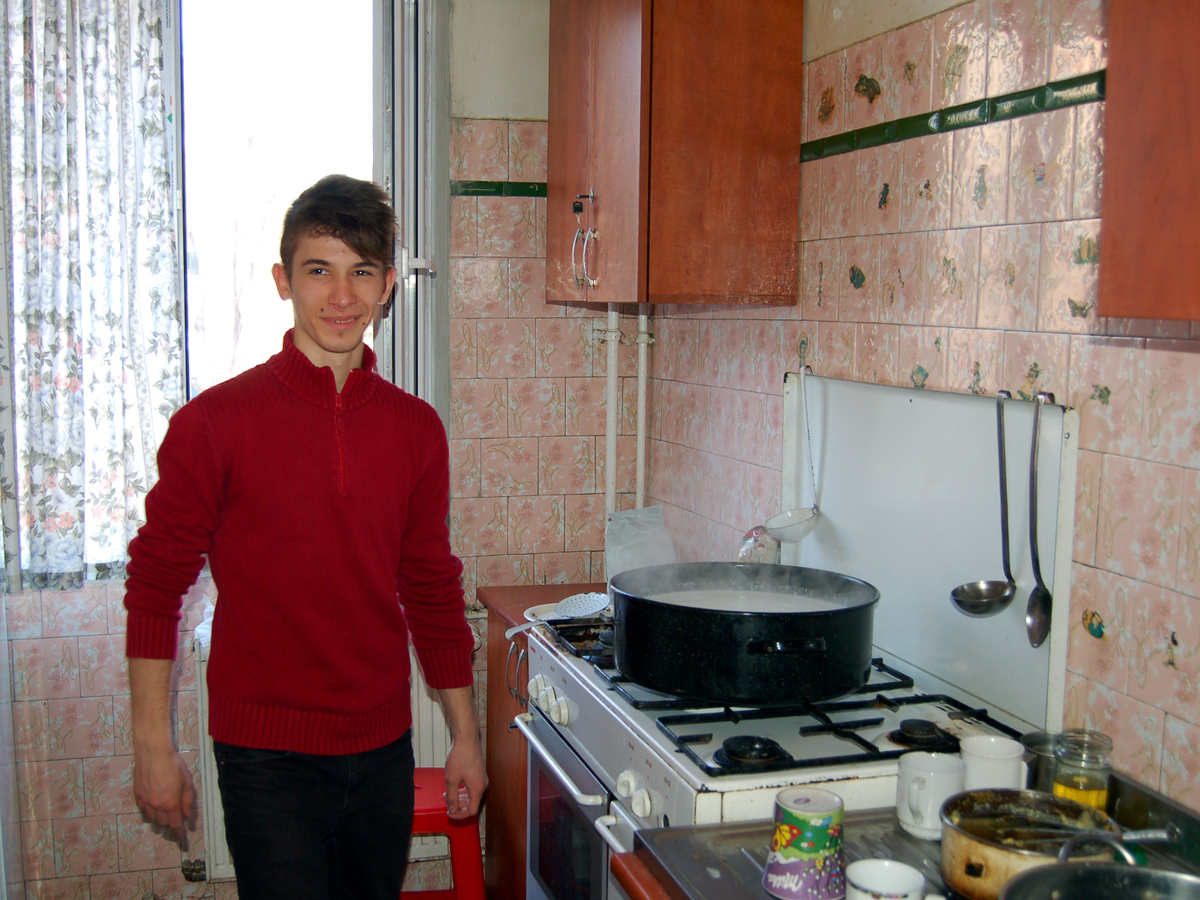 Many Romanian kids who grow up in orphanages lack life skills when they leave the institutions at age 18. At Grosuleac's home, boys go to school, get jobs and do household chores. Here, Emanuel prepares a rice dish for dinner.

Life at Good Shepherd can still be tough, Grosuleac says.

"There were days when we were starving to death and we didn't have anything to eat for days, and we would all pray here on our knees and someone would appear at the door with a stack of hot pizzas," he says.

But the boys agree that they are better off than they would be otherwise.

George, 23, came to Good Shepherd after the death of his grandmother, when he was 12. George's last name has been withheld for his protection; those identified as orphans in Romania are often discriminated against and sometimes passed over for jobs and apartments.

"[Florin Grosuleac] always tried to get me the best thing, the best education, and tried to make me think for myself and to look for good things in life," George says. "The only thing I lacked was parents, but in a way it was compensated by the people from the foundation."

Like many other boys raised by Grosuleac, George graduated from high school and started working in hopes of earning enough to go out on his own. At 16, he started working during vacations from school as a receptionist at an auto supplies company.

And, like the other boys who have been able to balance a job and school, George contributed to a general fund to help pay for the apartment's rent, utilities and food. Several boys earn money by playing instruments at churches of varying religions across the city.

Grosuleac also has a job outside this house. He is a chauffeur four days a week, with most of his earnings going toward the house and the support of his three biological children.

There were days when we were starving to death and we didn't have anything to eat for days, and we would all pray here on our knees and someone would appear at the door with a stack of hot pizzas.

Florin Grosuleac, a Romanian who has taken in more than 60 abandoned boys over the past 13 years

His two sons help the orphans with homework, among other tasks. Grosuleac is divorced, and his daughter lives with her mother.

Rent runs about $450 a month, and utilities range from $200 to $350. At the beginning, additional funds came from foundations in America, and later, from The Netherlands, Grosuleac says. But donations are few these days. He blames the worldwide economic crisis.

"From time to time we get some donations," he says. "There is no money coming from the government. ... The government has no responsibility whatsoever. They are not involved in any way. And they are not helping out."

Grosuleac says he appealed to the government at one point.

"Their response was 'Who asked you to do this? Why are you doing it?,' " Grosuleac says. "Whatever it means, social assistance, it is left off the end of the list."

Grosuleac does get about $12 a month each for the two youngest kids because they are not yet 18 and therefore still fall under the Department of Child Protection. Several attempts to contact the department for this article received no response.

"There were several times over the years when I sat down and said, 'It is enough. I can't go forward anymore,' " he recalls.

Most orphans in Romania, by law, must leave the state institutions when they turn 18. There are exceptions; those who manage to attend college, for example, can generally stay a few more years.

But many find it difficult to enter society after living in an institution. Few have learned the life skills needed to survive — how to find an apartment and a job, to earn, save and manage money. 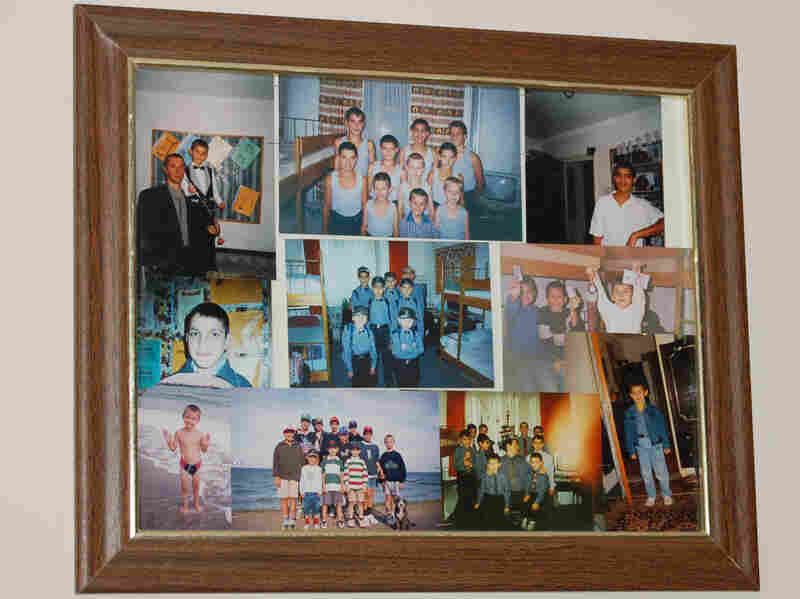 A collage of photos of some of the boys Grosuleac has raised. Meghan Collins Sullivan for NPR hide caption 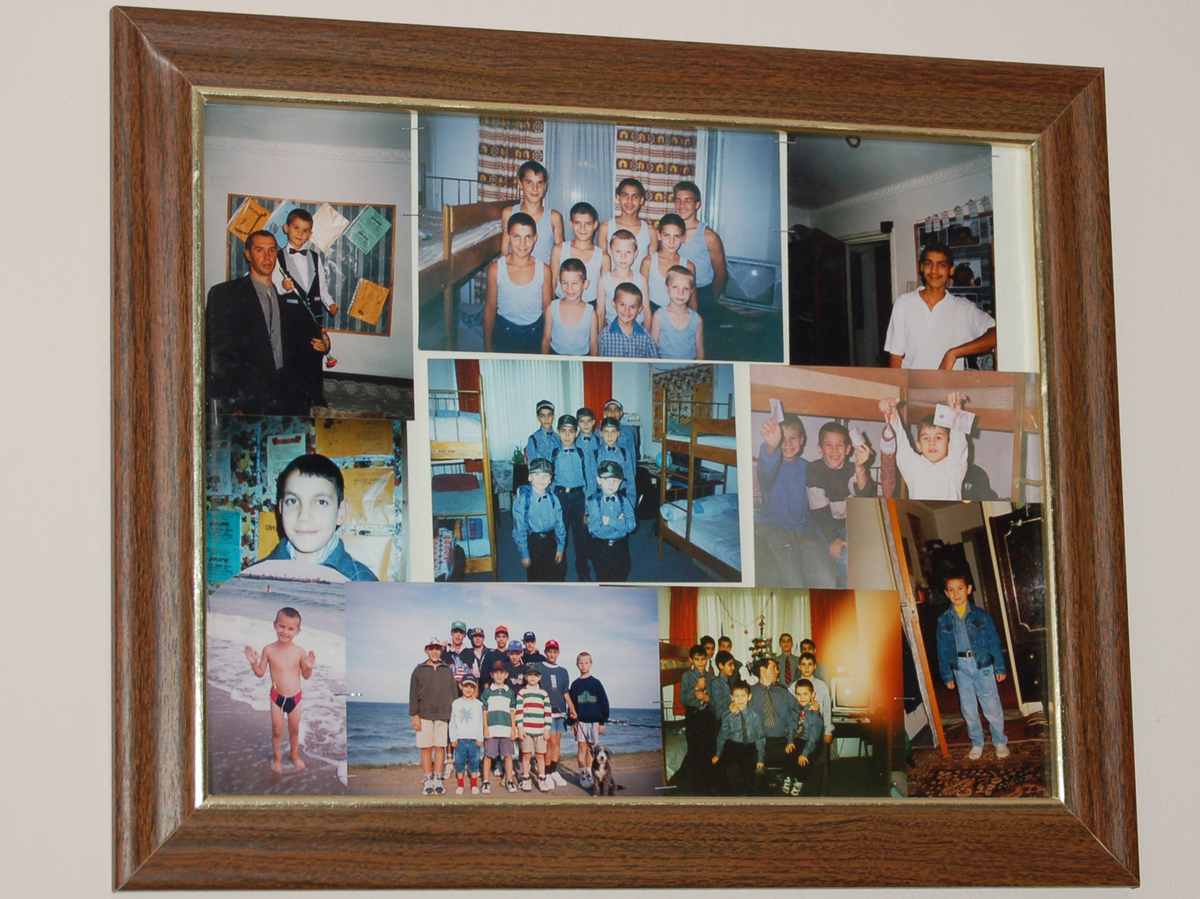 A collage of photos of some of the boys Grosuleac has raised.

"I am trying to make sure after they finish up school, they get a job and are prepared to be on their own," Grosuleac says.

For one thing, all the kids have chores. He also teaches the kids to cook by having them prepare evening meals for the house.

While he aims to ready them for life on the outside, Grosuleac doesn't force the boys to leave when they are 18.

"If they want to leave on their own, it's their decision. But I continue to support them," he says.

How successful his boys end up being depends, he says, on their intelligence and motivation. Some have gone to college or learned multiple languages. One graduated from law school.

But, like any dad, he continues to worry about them.

Grosuleac says he was happy to find another foundation, SansaTa, which aims to help young adults leaving orphanages and group homes. The founder and director of SansaTa is an orphan who grew up in one of Romania's infamous institutions.

"I was so stressed — what is going to happen to these kids next? I brought them here to this point, but what will happen to them now? The fact that ... some of these kids are now in this project is a huge relief and accomplishment, because now I can sleep soundly," he says.

SansaTa, or "Your Chance," has developed a plan for helping young adults go from orphanages to small apartments. The blueprint for the first building is complete, location secured, and its first 12 residents have been named. The foundation is fundraising now, and its future residents will work on the construction to help pay for their apartments.

George, living at the Good Shepherd apartment, is one of those on the list.

As for the future of Good Shepherd, Grosuleac says he believes he has taken in his last orphan.

Meghan Collins Sullivan is a former supervising editor at NPR. Her reporting in Romania is supported in part by a Rosalynn Carter Fellowship for Mental Health Journalism.