Accessibility links
Swarming Up A Storm: Why Animals School And Flock By tricking live fish into attacking computer-generated "prey," scientists have learned that animals like birds and fish may indeed have evolved to swarm together to protect themselves from the threat of predators. 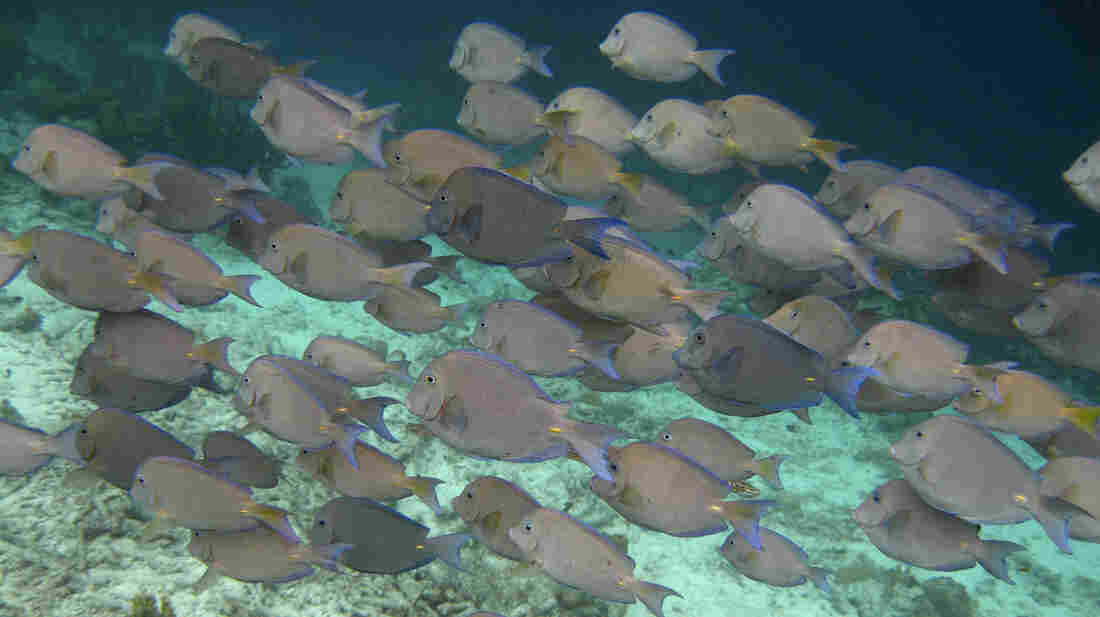 A school of Blue Tang fish swimming together off the Caribbean island of Bonaire. It has long been assumed that the schooling behavior of fish evolved in part to protect animals from being attacked by predators. David J. Phillip/AP hide caption

By tricking live fish into attacking computer-generated "prey," scientists have learned that animals like birds and fish may indeed have evolved to swarm together to protect themselves from the threat of predators.

"Effectively, what we're doing here is we're getting predatory fish to play a video game," says Iain Couzin, who studies collective animal behavior at Princeton University. "And through playing that game, through seeing which virtual prey items they attack, we can get a very deep understanding of as to how behavioral interactions among prey affect their survival."

It has long been assumed that the schooling behavior of fish and the flocking behavior of birds evolved in part because it helps protect individuals from being attacked by predators, says Couzin. "But in actual fact there is surprisingly little direct evidence."

That's because it's been hard to come up with experiments that could test how different kinds of group behavior affect predation risk. "It is very hard to manipulate the behavior of, say, a bird flock and then see what effect it has on a falcon. That's virtually impossible," says Christos Ioannou at the University of Bristol in the United Kingdom.

Together with colleague Vishwesha Guttal, they decided to see if they could create a virtual population of pretend fish that would look convincingly real to a predator.

The predator they selected was the bluegill sunfish. They went to a local lake with nets, collected a bunch of them, and took the fish back to the lab. 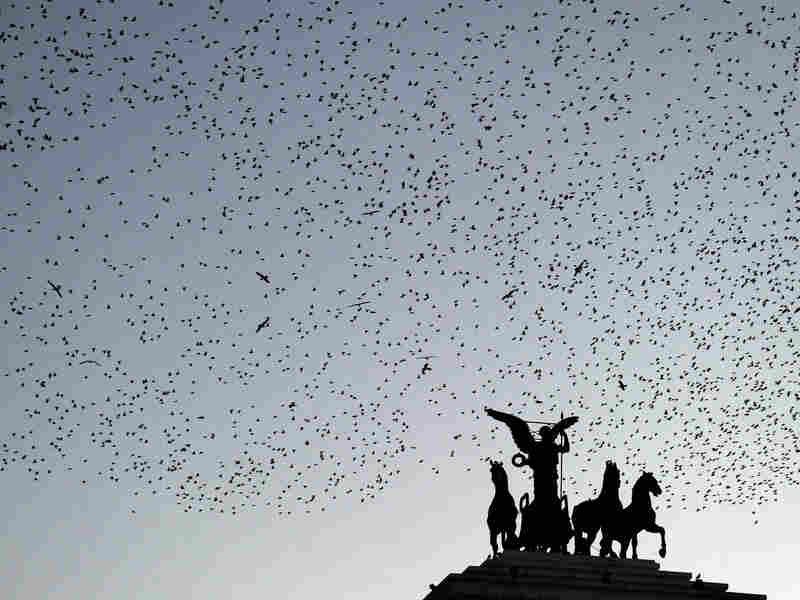 "The nice thing about bluegill sunfish is they're generalist predators. They will tend to hunt pretty much anything that's alive and in the environment that's smaller than them," says Couzin. "And so we don't need to train them to attack our virtual prey."

The prey were little dots of light projected onto a transparent film on the inside of the tank. On the computer screen, the dots look red, but the projected images look white or slightly pink. "To the fish they look very much like little zooplankton, little creatures that live in the water body that move around, that we know group together in the natural environment," says Couzin.

The predatory fish would hover near a dot, and then strike — only to get a mouthful of nothing.

The computer-generated prey items were each programmed to follow a different set of rules for behavior. For example, some were strongly attracted to others and wanted to be close to them. Others preferred to go off on their own. And others would match their direction of travel with whoever was nearby.

The researchers kept track of which individuals got attacked, and programmed the system so that those individuals' behaviors were less likely to be transmitted to the next generation of prey. "And so we could actually allow our virtual population to evolve the strategies that best avoid being attacked by real predators," says Couzin.

What they learned is that in response to the attacks, the virtual prey spontaneously formed groups that not only aggregate but move together.

"I think it's the first evidence that this coordinated behavior we see in bird flocks and fish schools, where individuals are really highly coordinated in the direction they're heading, has an anti-predatory effect," says Ioannou. "To our knowledge that's the first time it's been done in a really clear, experimental way."

The results are published in the journal Science.

Couzin says that his lab is continuing to develop the technology to do more sophisticated tests. They're adding a new projection system that allows the virtual prey to appear to move in three dimensions, and an eye-tracking technology for the fish that would give the virtual prey some real-time information about the predator's intentions.

"These prey can now respond to the predator, they can now avoid the predator," says Couzin, "and so we've really taken this technology much, much further, allowing us to continue exploring this integration of the real and the virtual worlds."