Accessibility links
PTSD Isn't Just A War Wound; Teens Suffer, Too About 4 percent of teenage boys and 6 percent of teenage girls have PTSD. Many of them have physical symptoms related to their stress, including problems sleeping, weight gain and hair loss. Researchers are trying to identify which parts of the brain are affected by PTSD so they can come up with more ways to treat the disorder. 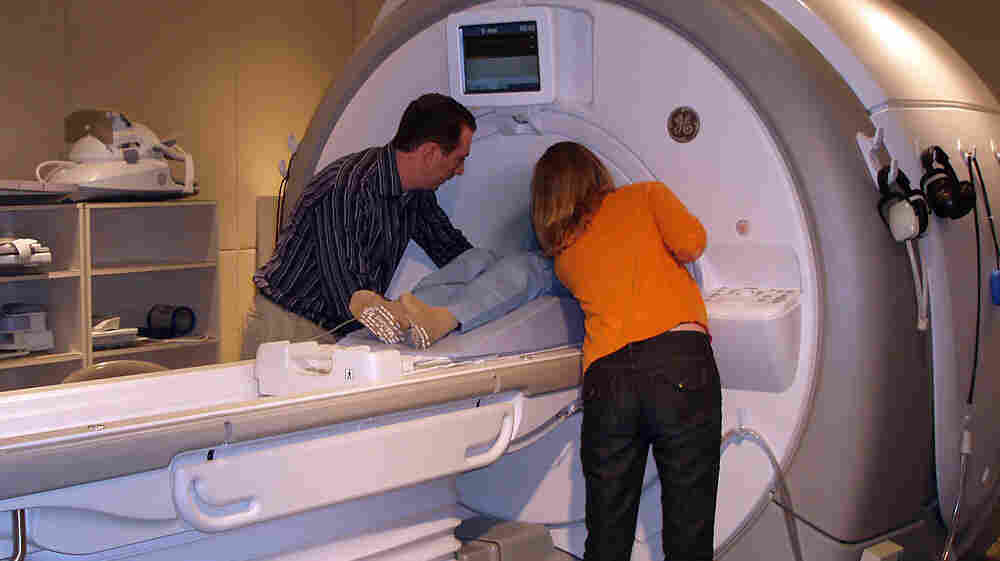 Dr. Amit Etkin and a research assistant help a participant into the bore of the MRI. Courtesy of the Etkin Lab at Stanford University hide caption

toggle caption
Courtesy of the Etkin Lab at Stanford University

Though post-traumatic stress disorder is often associated with war veterans, many sufferers have yet to finish high school.

But adolescents can be hard to diagnose.

The night Stephanie Romero turned 23, she and a friend were attacked by a stranger.

"My friend went outside to have a cigarette, and there was this guy — he came out; he was harassing us," she says.

The man hit her and her friend, leaving Romero shocked.

"It was just a total nightmare," she says. "I think about it all the time. I've never gone through anything like that."

After the attack, Romero's friends and family noticed she was acting differently. She didn't go out as often. Her weight started changing. She was really depressed. Later, doctors diagnosed her with post-traumatic stress disorder.

"I was like, PTSD? I thought it was just for veterans," Romero says. "But I found out it's not; it's for anyone who's experienced an event where you keep thinking about it and it takes over your life."

I can relate. When I was 15, my mom was murdered. I tried everything I could to deal with my feelings, including writing songs.

But still, something was different about me. I noticed that I didn't feel like my normal self anymore, not only mentally, but physically. I was losing weight, and my hair was falling out.

"That's a pretty clear symptom that things aren't going well," says Jamal Harris, a pediatrician at a community health center in San Francisco. Harris says he sees teens with PTSD at his clinic all the time, and that many of them have physical symptoms related to their stress.

"Some examples in teens would be problems sleeping, weight gain, and just being frustrated," Harris says.

It turns out a lot of those changes are due to hormones your body makes in response to stress. This can be a good thing. For example, if a car comes at you all of a sudden while you're crossing the street, your body produces a chemical called cortisol, which helps you react fast enough to move before the car hits you.

But for people with PTSD, such as Stephanie Romero and me, it doesn't take a speeding car to set us off.

Emotional Connections In The Brain

In a lab at Stanford University, scientists are using a technology called Functional Magnetic Resonance Imaging, or fMRI, to study the emotional reactions of patients with PTSD.

"So we know, for example, when they're faced with a reminder of their trauma, they don't activate the circuitry we normally associate with emotional regulation, the ability to be resilient in an automatic effortless fashion," says Dr. Amit Etkin, the project's lead researcher.

"Over time, elevated cortisol can cause death of neurons in the brain, the kind that don't get replaced," he says.

But that doesn't mean PTSD can't be treated. Scientists know talk therapy can be helpful. Etkin wants to understand how that kind of therapy might be repairing emotional connections in the brain. And he's recruiting volunteers.

The Blink Of An Eye

Stephanie Romero is one of the research subjects participating in the study. Ten months after her attack, she's still having trouble feeling safe.

"It's always in the back of my head. Like, you just never know your life could change in the blink of an eye," she says. "One minute you could be celebrating your birthday, and the next you're in the hospital and you don't know how you ended up there.

In a room on the other side of a huge glass window, Romero lies in an fMRI machine, which looks like a big tube with a small hollow center. A monitor shows different angles of her brain.

"A lot of what we look at with emotion is focused on certain regions of the brain. One of them is the amygdala, which is really important not only for guiding your attention and focus on a threat stimulus, but also for affecting your body," he says. "But somebody with PTSD doesn't activate that circuitry well."

Etkin asks Romero several questions to help him identify which specific parts of the brain are affected by PTSD, and how she feels throughout the experiment.

"Does she feel in her body at the moment, or is she feeling, like many PTSD patients report, feeling a little out of body, or detached, or unreal?" he asks.

I can relate to that unreal feeling. It started to hit me right there in the lab. Etkin hopes by understanding how that feeling plays out inside the brain, scientists will be able to come up with more effective ways of treating this disorder, whether it's through singing, talking, neuroscience, or all of the above.