Accessibility links
Comedian Mike Birbiglia Plays Not My Job Mike Birbiglia gained fame with his monologues on This American Life. Now, along with TAL host Ira Glass, he's made one of his stories into a new movie called Sleepwalk with Me. He answers three questions about Julia Child, who would have turned 100 on Wednesday. 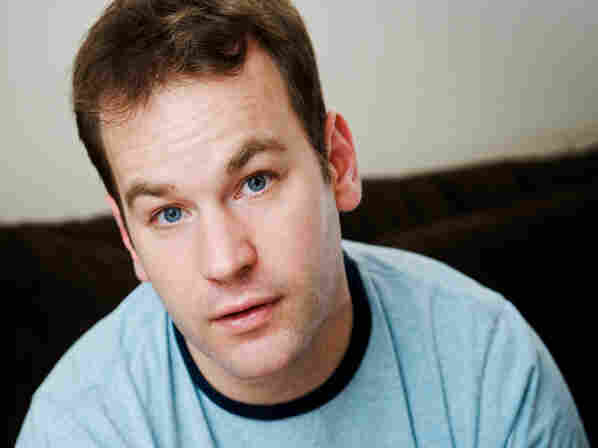 Stand-up comedian Mike Birbiglia gained fame with his wry and witty monologues on This American Life. Now, along with TAL host Ira Glass, he's made one of his stories into a new movie called Sleepwalk with Me.

We've invited Birbiglia to play a game called "Bon appetit!" Paula Deen wasn't the first TV chef to try to murder us with butter; Wednesday would have been Julia Child's 100th birthday, and in her honor, Birbiglia will answer three questions about the French chef.

And now the game where we invite somebody on who has done something cool, just to remind them why they should stick to doing cool things. Mike Birbiglia is a stand up comedian who gained fame by doing his monologues on "This American Life." Now, along with Ira Glass, he's made one of his stories into a new movie, written by, directed by, and starring Mike Birbiglia.

Mike, welcome to WAIT WAIT...DON'T TELL ME! Great to have you.

SAGAL: So, congratulations on the movie, which I've seen, which is terrific.

SAGAL: It's called "Sleepwalk with Me," and it started as a monologue that you did initially for "This American Life" or was it before that?

BIRBIGLIA: Yeah. And by the way, don't mention to Ira Glass that I'm here.

BIRBIGLIA: Because I think he'd be upset. He's very territorial.

BIRBIGLIA: It was a one-man show that I had written called "Sleepwalk with Me" and then he had heard a segment of it that I had done on The Moth, the storytelling series in New York City. And then he played it on the air, and since then we've done a bunch of stories together. And then we decided to make this movie.

SAGAL: So the movie is about - well it's about a standup comedian named?

SAGAL: Matt Pandamiglio, who looks a lot like you because you play him. And it's about something that happened to you.

SAGAL: Right. But it's not - why aren't you just you in the movie?

BIRBIGLIA: What are you getting at here?

SAGAL: I mean, briefly put, it's about a guy starting his standup career and he's sort of struggling with what kind of comic he wants to be.

SAGAL: He also has this particular problem, which is that he sleepwalks and bad things happen.

SAGAL: But how true is it then? I mean, the stories of your sleepwalking adventures are true. You really did sleepwalk and run straight through a second floor window...

BIRBIGLIA: I jumped out of a second story window in my sleep and a lot of other funny stuff.

LUKE BURBANK: But none of the car chases with Bruce Willis happened.

BIRBIGLIA: Yeah, that was...

SAGAL: Well, I was wondering about this because in the movie, this character Matt Pandamiglio.

SAGAL: Pandamiglio has parents who are nice people but aren't perfect people.

SAGAL: And are kind of neurotic and argumentative and annoying. So, are you going to show this movie to your parents?

BIRBIGLIA: I am eventually going to show - yeah, I'm going to accompany them to the movie. And I'm going to tell them that I love them.

SAGAL: And how do you think that's going to go, that evening?

BIRBIGLIA: Since my parents, I think, listen to this show.

SAGAL: Well, do you want to role play it, because I can be your dad? It was like...

SAGAL: Mike, why did you make me look like such a jerk?

BIRBIGLIA: Well, Ben, it's not you, it's Frank Pandamiglio.

PAULA POUNDSTONE: All right, I'm your mother. We tried and tried with you.

BIRBIGLIA: Mom, why are you crying?

BIRBIGLIA: Don't cry. And then I'll hug her. It'll be fine, Paula.

POUNDSTONE: I think this is all going to work out really well.

SAGAL: Let's go back to the sleepwalking stuff, it's kind of amazing. What is the craziest thing that happened to you while sleepwalking?

BIRBIGLIA: Well, I would often wake up in, you know, the outdoors and at hotels. And I'd have to walk to the front desk and explain what happened. And even during the filming of the movie - this is completely absurd, because when you're making a movie, you're sleep deprived and you're stressed out by virtue of what the job is, which aggravates sleepwalking and sleep disorders.

BIRBIGLIA: And so I would sleepwalk during the making of the film and I would have dreams that I was directing myself.

BIRBIGLIA: And she said no, Mike, we're not shooting. And I said I'm sorry, but we are.

BIRBIGLIA: Like, I would actually be condescending about it. Like, you just don't understand what's going on here. We're making a movie. You know, but meanwhile it was just, you know, my lamp.

SALIE: What do you wear when you go to sleep, since you know you might end up out of your bed?

BIRBIGLIA: When I go to bed at night, I wear a sleeping bag. And for a long time I wore mittens so that I couldn't open the sleeping bag.

BIRBIGLIA: And yeah, I have a cocooned worm in my bed. I don't wear the mittens anymore, but I still do wear the sleeping bag. It was a medical doctor who told me to do that.

SAGAL: Well, Mike Birbiglia, we are delighted to talk to you. We have invited you here to play a game that this time we're calling?

SAGAL: Paula Deen was not the first TV chef to try and murder us with butter. Wednesday would have been the 100th birthday of Julia Child. We're going to ask you three questions about the French Chef, in her honor. Get two right, you will win Carl Kasell's voice on the voicemail for one of our listeners. Bill, who is Mike Birbiglia playing for?

SAGAL: All right, you ready to play, Mike?

SAGAL: All right, here we go. We all know Julia Child's famous traditional recipes, but she made some more unusual ones in her long career, including which of these? A: Coq au Vin au Nachos?

BIRBIGLIA: Oh geez. Well, I think the goal of this, as I understand it, is to make me look like an idiot.

SAGAL: No, we've already done that part of the show.

SAGAL: This is where we redeem you.

BIRBIGLIA: Well, this is really not my field of expertise, but I'm going to say the nachos.

SAGAL: I like that thinking, but no, it was Primordial Soup.

SAGAL: In a video that you can see at the Smithsonian Institution, Julia Child is shown making a broth of amino acids meant to recreate the primordial soup.

SALIE: Peter, you didn't take French, did you?

SAGAL: How do you know?

SALIE: Were you in Spanish?

SAGAL: No, I was pretty much a fake Yiddish accent for jokes.

BURBANK: Today, I accidentally hit the Japanese language function on the ATM, and I just powered because I was like, "don't judge me, ATM, I might know Japanese."

BIRBIGLIA: How much money did you get out?

SAGAL: Next question, many fans have tried to express their love for Julia Child. Which of these tributes is real? A: A farmer in Massachusetts made a massive Julia Child corn maze? B: A scientist named a bacteria found in chicken dropped on the floor salmonella juliachildia?

SAGAL: Or C: A staged burlesque adaptation of her PBS show. It was called "French the Chef?"

BIRBIGLIA: Wow. I am super game for participating in any of those ideas, so call me. But I'm going to go with the maze one.

SAGAL: You're going to go with the corn maze?

SAGAL: You're right, in fact.

SAGAL: Corn maze. If you look at it from above, the corn maze looks like Julia Child.

SAGAL: Here is your last question, Mike. Back in 2002 blogger Julie Powell spent a year making all of the recipes in Julia Child's "Mastering the Art of French Cooking." That became a book, which became the movie "Julie and Julia." But that was not the only stunt that Julia Child inspired. Which of these is real? A: George Foreman, in a marketing ploy, tried to make all 524 recipes in the book using only a George Foreman grill?

SAGAL: B: David Blaine successfully stuffed his entire body inside a chicken de-boned using Julia Child's methods? Or C: A man started a blog where he watched "Julie and Julia" every day for a year?

BIRBIGLIA: I, as much as I'm in support of David Blaine doing anything.

BIRBIGLIA: I don't think that one happened.

SAGAL: So move on.

BIRBIGLIA: I'm going to go with the blog, because it feels like it could have been something that someone would do because that's what the character in the film does.

SAGAL: So you're going to go with the guy who blogged about watching the movie "Julie and Julia" every day for a year.

SAGAL: You are right, very good.

SAGAL: If you add it up, that's an entire month of watching "Julie and Julia." Bill, how did Mike Birbiglia do on our quiz?

BIRBIGLIA: This is such an honor.

SAGAL: Yeah. Mike Birbiglia's new movie, written, directed by and starring him is called "Sleepwalk with Me." It opens nationwide August 31st. Go see it. It's charming and funny as hell. Mike Birbiglia, thank you so much for joining us.