Accessibility links
Pine Ridge Reservation Deaths To Be Reinvestigated A deadly occupation at Wounded Knee, S.D., in 1973 left a legacy of violence. Now a U.S. attorney is re-examining 45 related deaths that tribal officials believe had the backing of the FBI. 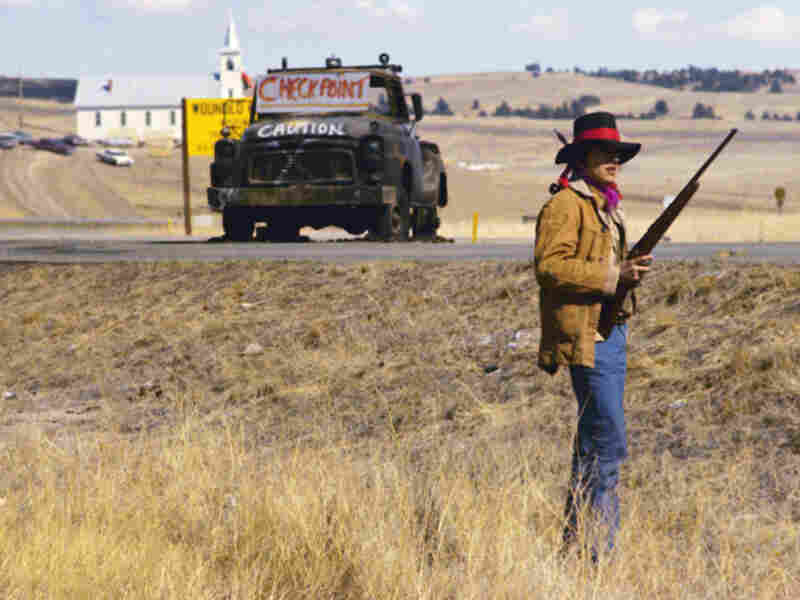 In 1973, members of the American Indian Movement occupied the town of Wounded Knee, S.D., on the Pine Ridge Indian Reservation. They were protesting the murder of an Oglala Lakota man and the failed impeachment of a tribal president that AIM members accused of corruption. The protests escalated into a deadly standoff that lasted 71 days. AP hide caption

In the late 1960s, Native Americans fed up with what they saw as years of mistreatment by the federal government formed an organization known as the American Indian Movement.

Founded in Minnesota, the group followed in the footsteps of the civil rights movement and took up protests across the country. One of those protests took place in 1973, when some AIM members occupied the South Dakota town of Wounded Knee, located on the Pine Ridge Indian Reservation.

Their protest followed the murder of an Oglala Lakota man and the failed impeachment of a tribal president that AIM members accused of corruption. The protests escalated into a violent standoff with federal authorities.

The 71-day siege was only the beginning of turmoil on Pine Ridge. Local residents, such as AIM member Milo Yellowhair, say the violence continued for years.

"There had been a tremendous amount of carnage on the reservation [and] it was almost a daily occurrence, when people were disappearing or died or were found dead," Yellowhair says. "We always called it a 'reign of terror.' "

Yellowhair says the violence in the 1970s left behind a festering wound. Many on the Pine Ridge reservation think FBI officials backed the tribal police in carrying out assaults and murders against AIM supporters.

Today, widespread mistrust of the federal government continues, so much so that the Oglala Sioux Tribal Government recently asked U.S Attorney Brendan Johnson to look at 45 deaths that tribal officials believe have not seen justice. The cases include two unsolved execution-style murders in 1998. Johnson says he agreed to re-examine all 45 cases in question.

"Recognizing that it's very unusual for a U.S. attorney to go back and to agree to look at historic cases," Johnson says, "it's nonetheless important because it's part of the journey that we're on to continue to build trust in these communities."

Johnson says FBI officials also are dedicated to keeping Indian country safe and that he doesn't wish to tarnish the agency's reputation or current work with this new investigation. FBI officials wouldn't comment on tape, but say they're cooperating fully with the review and deny any involvement in crimes on Pine Ridge.

Skepticism On Both Sides

John Trimback is the son of a former Pine Ridge FBI agent and co-wrote the book American Indian Mafia. He says allegations against the FBI of wrongdoing on Pine Ridge are false and perpetrated by suspicious sources.

"It's from the people who were involved in the rapes and the murders and the assaults on the Pine Ridge reservation during that period," Trimback says. "I'm talking about, in general, the AIM leaders."

For their part, AIM leaders adamantly deny they were involved in crimes on Pine Ridge. AIM members such as 72-year-old Madonna Thunderhawk welcome the U.S attorney's review of these old cases but doubt justice will be served.

"I mean, come on, the U.S. government investigating itself, again. ... I'm skeptical," Thunderhawk says. "I'm glad it's happening [and] I'm going to sit here and watch."

Slideshow: The Light And Dark On Pine Ridge Reservation

It's not only older AIM members who are watching.

On a recent day, a drum group on Pine Ridge played at the annual commemoration of a 1975 firefight known as the Incident at Oglala. It left two FBI agents and an AIM member dead. Most of the young men around the large drum are the grandchildren of those who were here in the 1970s. Among them is Robert Watters.

"Now their time is over and now it's our time to be doing these things," Watters says. "It's just history repeating itself; I'm following in my grandma's footsteps, what she taught me all these years growing up."

Johnson, the U.S. attorney, says he has no timeline for the results of the review. It's doubtful, though, that the findings will calm the debate over who is responsible for decades-old actions on Pine Ridge. Still, many on the reservation share in the U.S. attorney's hope that at the very least some sort of closure can be found.