Accessibility links
Dallas Deploys Old Weapon In New Mosquito Fight The city has approved its first aerial spraying in 45 years to combat an outbreak of West Nile virus. Over the years, the chemicals used for aerial spraying have become much safer for everything and everyone involved — save the mosquitoes. 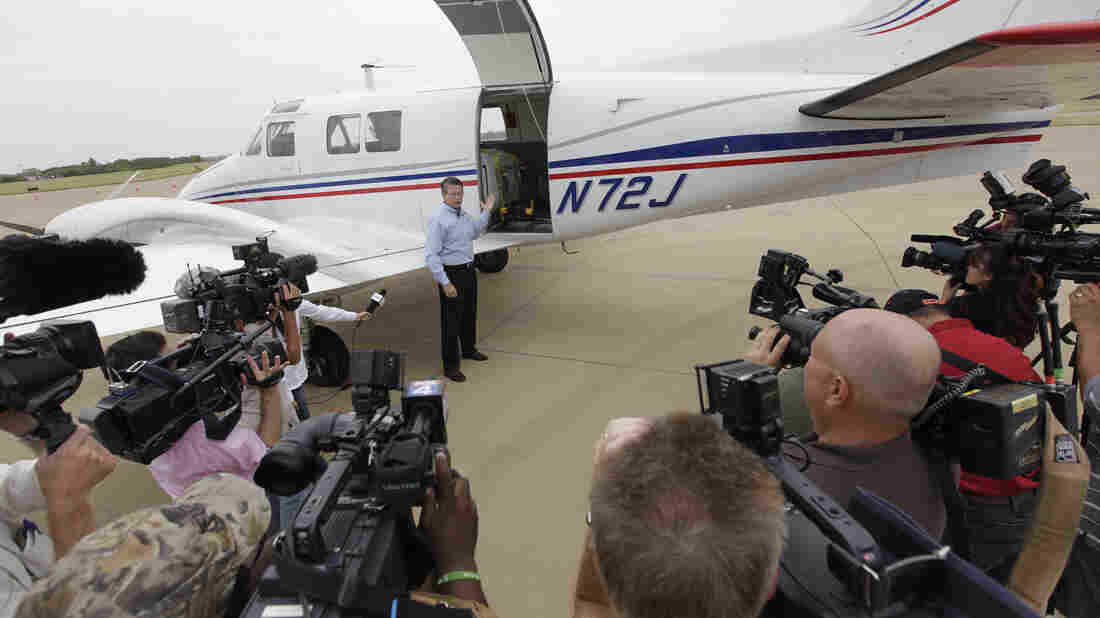 Mike Stuart of Dynamic Aviation speaks to the media this week about the type of plane used for aerial spraying in Dallas. The city and county are conducting aerial spraying to combat the nation's worst outbreak of West Nile virus, which has killed at least 10 people and sickened about 200. LM Otero/AP hide caption

The recent outbreak of West Nile virus in the Dallas area has led to a new round of large-scale spraying for mosquitoes — a method of treating outbreaks that has generations of success, and even nostalgia, behind it.

Although the overall mosquito-killing strategy has changed little since the days when it was pioneered during construction of the Panama Canal a century ago, the chemicals used have become much safer for everything and everyone involved, save the mosquitoes, experts say.

Still, raining insecticides down from the sky has alarmed some residents of Dallas, where an outbreak of mosquito-borne West Nile has killed at least 10 people and sickened more than 200 others. On Wednesday, Dallas Mayor Mike Rawlings approved the first aerial spraying over the city in some 45 years.

The last time Dallas was the target of an "aerial application" of insecticide, malathion was used. The chemical was the subject of controversy in the 1980s when it was used to kill the Mediterranean fruit fly in California. It is considered generally safe for humans.

Another common method of spreading insecticide is to use a truck-based fogging apparatus. If you're in your 40s or older, you might remember running through billowing white clouds of insecticide as the mosquito-control truck swung through your neighborhood on a sticky summer evening as a child. For some reason, many remember it as "the DDT truck," assuming that the chief weapon in the fog of war against the annual mosquito onslaught was the chemical banned in 1972 over environmental concerns.

Not so, says Roger Nasci, who is chief of arboviral diseases at the Centers for Disease Control and Prevention in Atlanta. DDT was a larval control put into the water. But the fogging trucks "were generally releasing malathion or an organophosphate," he says.

In fact, those puffy white clouds we remember were mostly a thermal oil used as a carrier for the actual insecticide, he says.

Even though it was malathion and not DDT that was sprayed from those fogging trucks or over Dallas in 1966, "if you go back historically, the bad characteristics of DDT certainly flavors the public's response to insecticides," Nasci says.

A lot has changed since then.

The pesticide being deployed in Dallas is a synthetic pyrethroid, an extract from dried chrysanthemum flowers. "Nothing's perfectly safe, but there are no detectable adverse effects," he says.

With new pressure application technology, unlike in the past, very little of the agent is needed to cover a large area. Still, Nasci says people in Dallas are justified in asking questions and getting answers on aerial spraying.

"I think some of the current public concern about the aerial application of the insecticides that are being used for mosquito control in that area comes from the fact that it's not something that has been done there frequently," Nasci says.

Some 250 miles south in Houston, however, it's a different story. It's there that Kristy Murray, an associate professor of pediatrics at Baylor College of Medicine's School of Tropical Medicine, has been studying West Nile for the past decade.

"Here in the Houston area, we have one of the most sophisticated mosquito-control districts in the entire country," she says. "And we've only had 14 cases of West Nile, yet something like 25 percent of our mosquitoes are testing positive for the virus."

Local officials have been extremely aggressive with both aerial and ground spraying.

Murray and Nasci point out that the use of chemical pesticides is only one prong of a multilayer attack on mosquitoes, targeted at either killing larval mosquitoes or adults. Getting rid of standing water, where mosquitoes breed, is important also, as are "personal measures," such as covering up and using skin-applied repellants.

And, it's important to remember that different types of mosquitoes carry different kinds of diseases. Dengue fever, for example, is carried by the Aedes mosquito, while malaria is transmitted by the Anopheles mosquito. West Nile is blamed on the common house mosquito, which is most active at night.

"That's why spraying is done at night. If you sprayed during the day, you'd miss your target," Murray says.

Although only a relatively small percentage of people get the most dangerous form of the disease, "it can cause debilitating lifelong changes in them," she says. "I think it's very important to prevent disease however we can."