Accessibility links
Dissident's Death Stirs A Drama In Cuba Cuban dissident Oswaldo Paya was killed in a car crash last month. Witnesses say it was an accident. But the government is using the case for propaganda purposes, Paya's family suspects a government conspiracy, and a Spanish activist has been jailed. 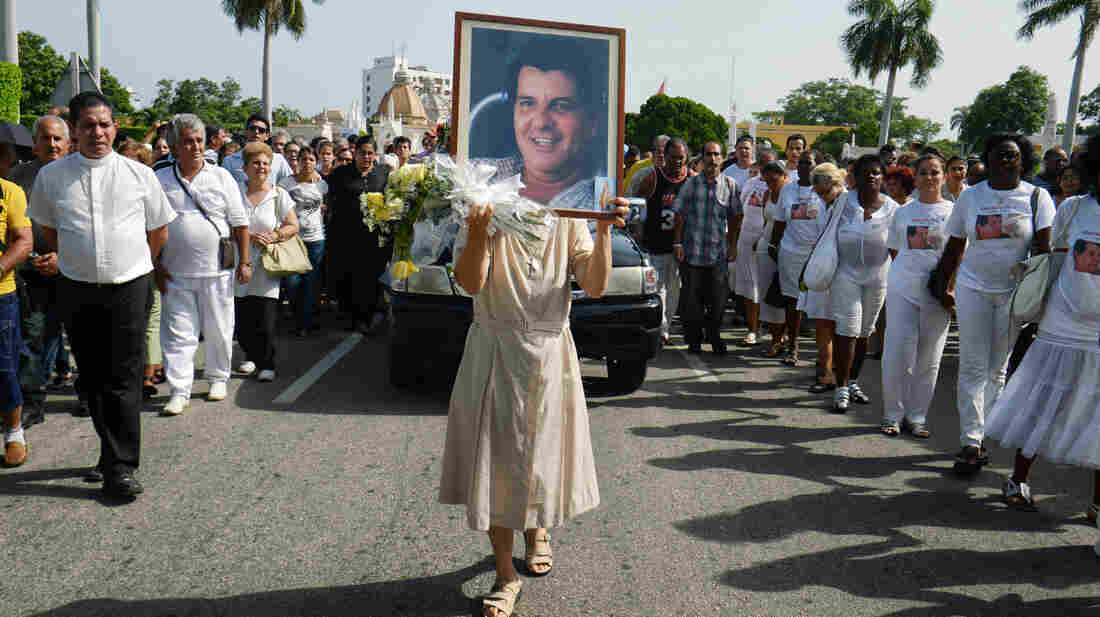 Oswaldo Paya, who challenged Cuba's communist regime for decades, died in a car crash on July 22. A Spanish man who was driving Paya has been charged with the equivalent of vehicular manslaughter. Here, a nun holds a portrait of Paya during his funeral in Havana. Adalberto Roque/AFP/Getty Images hide caption

The family of well-known Cuban dissident Oswaldo Paya, who was killed in a car crash in July, claims that the Cuban government may have had a role in his death.

But as new details come to light, it appears that a European activist who came to help Paya ended up accidentally killing him on a trip gone horribly wrong.

Actually, two Europeans, both 27, were in the car with Paya at the time of his death. The Europeans had met through Facebook.

Jens Aron Modig, chairman of the youth wing of Sweden's center-right Christian Democratic Party, wanted to travel to Cuba to support fellow Christian Democrats. He was put in touch with a youth leader of Spain's conservative Popular Party, Angel Carromero.

Soon after arriving in Havana on tourist visas, Modig and Carromero rented a car and set out with Paya to meet other dissidents across the island.

Carromero was driving at the time of the crash.

On Cuban state television, Carromero described the accident with images of their crumpled Hyundai. The young Spaniard says he suddenly came upon an unpaved stretch of highway, hit the brakes and lost control. The car careened sideways, slamming into a tree along the shoulder.

Paya was seated in the back seat on the driver's side and took the impact directly. He was killed instantly. Another Cuban dissident riding in the back, Harold Cepero, died later of his injuries. The two Europeans wore seat belts and weren't seriously hurt.

"I lost control of the car," Carromero says, "and that's the last thing I remember."

Carromero woke up in a Cuban nightmare, facing possible charges of vehicular manslaughter that could send him to prison for up to 10 years. But much of the government's focus since the crash has centered on Modig, his Swedish passenger.

Cuban authorities let Modig return home. But before he left, he told state television he'd come to Cuba with $5,000 for the dissidents. It may not sound like a huge amount of money, but it's valuable propaganda for Cuban authorities who depict all opponents of the Castro regime as paid lackeys of foreign powers. 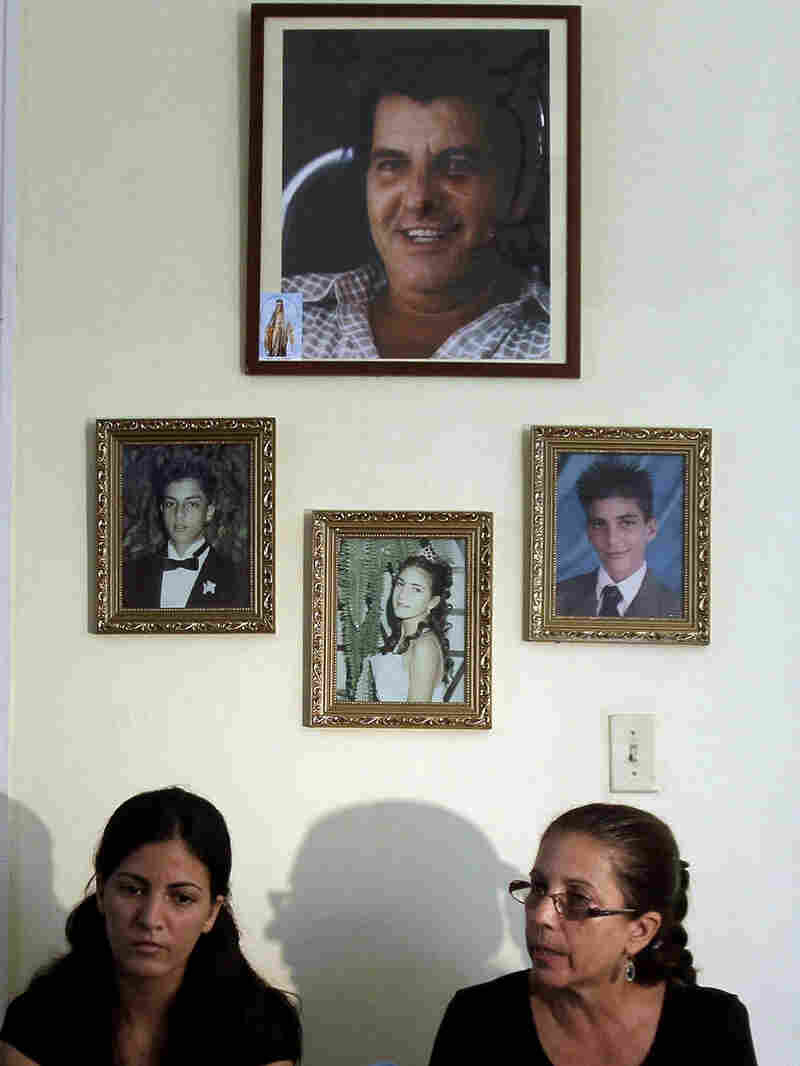 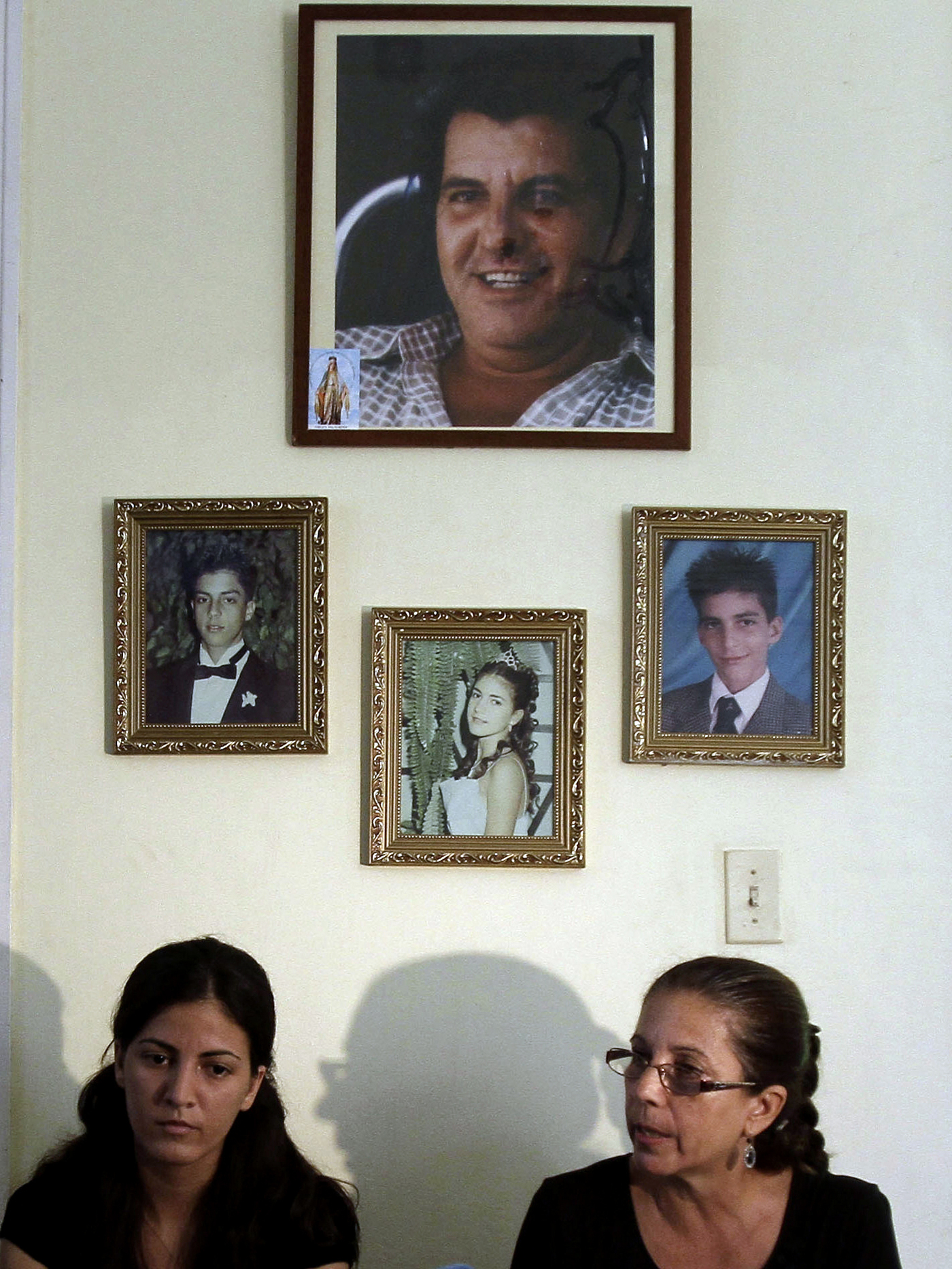 Ofelia Acevedo (right), the widow of Oswaldo Paya, and her daughter Rosa Maria Paya hold a news conference in Havana earlier this month. Acevedo says she doesn't believe her husband's death was an accident.

Government broadcasts have probably mentioned Paya's name more in the weeks since his death than in his 30-plus years of peaceful activism in Cuba. He was best known for leading a petition campaign a decade ago that gathered 15,000 signatures on the island in favor of democratic reforms. The European Parliament awarded Paya its top human rights prize in 2002.

After that, Paya had become less visible. Dissidents in Cuba typically face harassment or jail, but not outright assassination. However, his widow, Ofelia Acevedo, suspects the crash was no accident.

"I'm asking to speak with [Carromero]," Acevedo says. "I want a clear explanation of what really happened. I don't know if we'll ever get the truth, but I don't believe the government's version."

Castro opponents here and abroad allege another car was involved, or that the vehicle was run off the road. But the European survivors and other witnesses say it was an accident.

In his statement on Cuban television, the jailed Spanish activist, Carromero, urged the world to focus instead on "getting me out of here."

Cuban rights advocate Elizardo Sanchez says members of his group visited the crash site and saw no sign of foul play. But the doubts won't be settled until both Europeans can speak freely outside of Cuba, he says.

"Everything points to it being an unfortunate accident," Sanchez says, "but we won't really know until we get their testimony. At the same time, the communist government is definitely to blame for the lack of proper signage on its poorly maintained roads."

Investigators say Carromero was traveling at more than 70 miles per hour, well above the limit, at the time of the crash. Spanish newspapers have also reported that he arrived in Cuba just before his driver's license was revoked in Spain, having accumulated 45 traffic fines since March 2010, including several speeding tickets.

As for Modig, he's back in Sweden, but says he was sleeping at the time of the accident and remembers nothing. He faced several days of questioning in Cuba before he was allowed to leave, and said Cuban investigators were far more interested in his political activities than the crash.