Accessibility links
Pakistani Televangelist Is Back On Air, Raising Fears Pakistan's most famous, and infamous, TV evangelist has been rehired by a top station. In 2008, Aamir Liaquat made on-air threats against a religious minority, the Ahmadis. Those comments were followed by widespread violence against the group. Liaquat's return to the airwaves has rekindled the controversy. 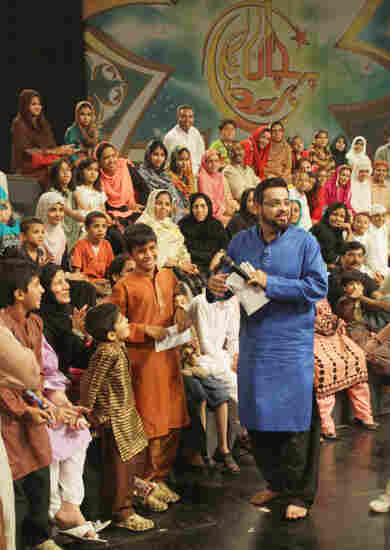 Aamir Liaquat, 41, is one of Pakistan's most famous and controversial TV hosts. During the holy month of Ramadan, he broadcasts live for 11 hours a day while fasting and drawing record audiences. Back in 2008, remarks he made about a religious minority in Pakistan were followed by a wave of deadly violence. He was fired and recently rehired. Courtesy of Geo TV hide caption

As Pakistan's media has expanded in recent years, there's been a rise in Islamic preachers with popular TV call-in talk shows. And they've had their share of scandal. One famous TV host fled the country after embezzlement allegations. Others are accused of spewing hate speech.

That's the case for Pakistan's most popular televangelist, Aamir Liaquat, who's just been rehired by the country's top TV channel despite accusations that he provoked deadly attacks in 2008.

Liaquat, 41, is once again the face of Pakistan's biggest and richest private TV station, Geo TV. He also appears in commercials for everything from cooking oil to an Islamic bank. During the Muslim holy month of Ramadan, he's been broadcasting live 11 hours a day — while fasting — and drawing record ratings.

"I say peace be with you, from the deepest core of my heart, with all sincerity and respect," he says warmly to viewers.

But the beaming TV personality has not always sounded so benign.

Four years ago, Liaquat did an hourlong special on a religious sect known as the Ahmadis. They consider themselves Muslim. But under a constitutional amendment in Pakistan, they are banned from calling themselves Muslim.

They believe in the Prophet Muhammad. But they also believe in Mirza Ghulam Ahmad, a 19th-century figure they believe was the messiah. Many Muslims call that blasphemy.

On live TV in 2008, Liaquat condemned the Ahmadis' messiah.

"He was like a dead body in terms of morality and character," Liaquat said. "He never spoke the truth and never kept his promises. He was a coward. His speech and writings make me vomit."

Then he sat nodding in approval while a guest mullah said people like the Ahmadis' messiah should be killed.

"Anyone who claims to be a prophet is an infidel, and deserves to be murdered," Maulana Muhammad Ameen said. 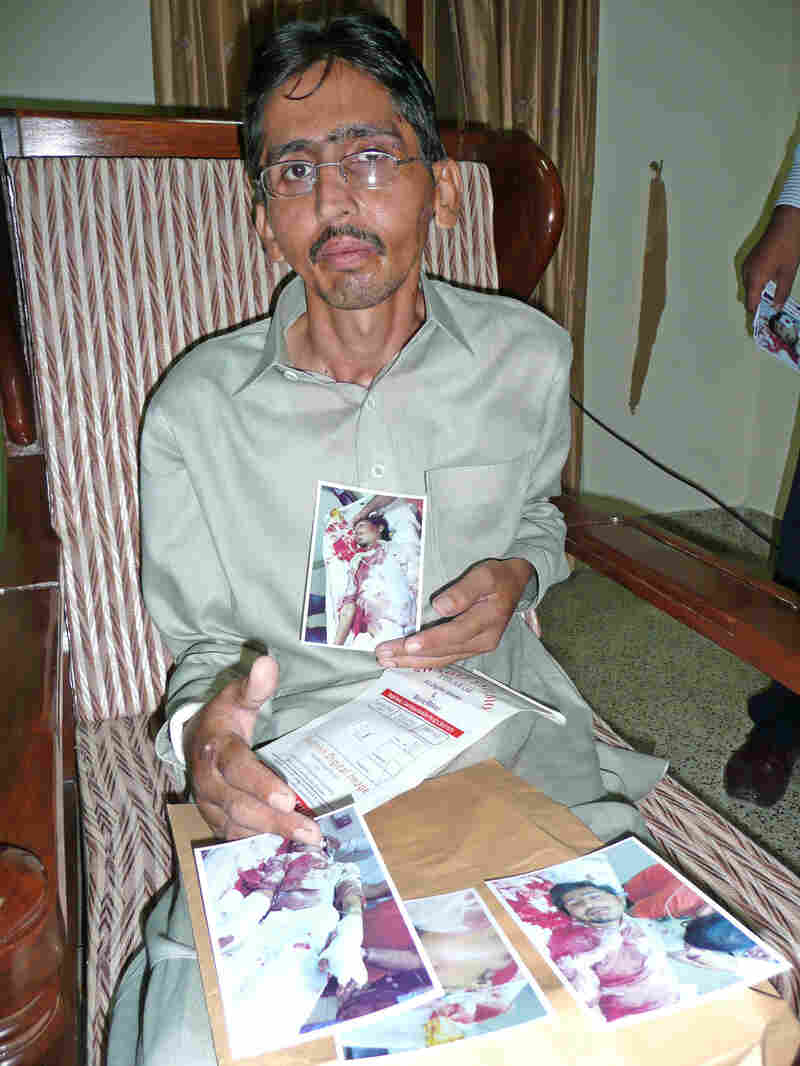 Mohammad Aslam Bhatti, 34, shares photos of himself taken after he was shot in the head, torso and arm by militants he says were motivated by Aamir Liaquat's TV program. Lauren Frayer/ NPR hide caption 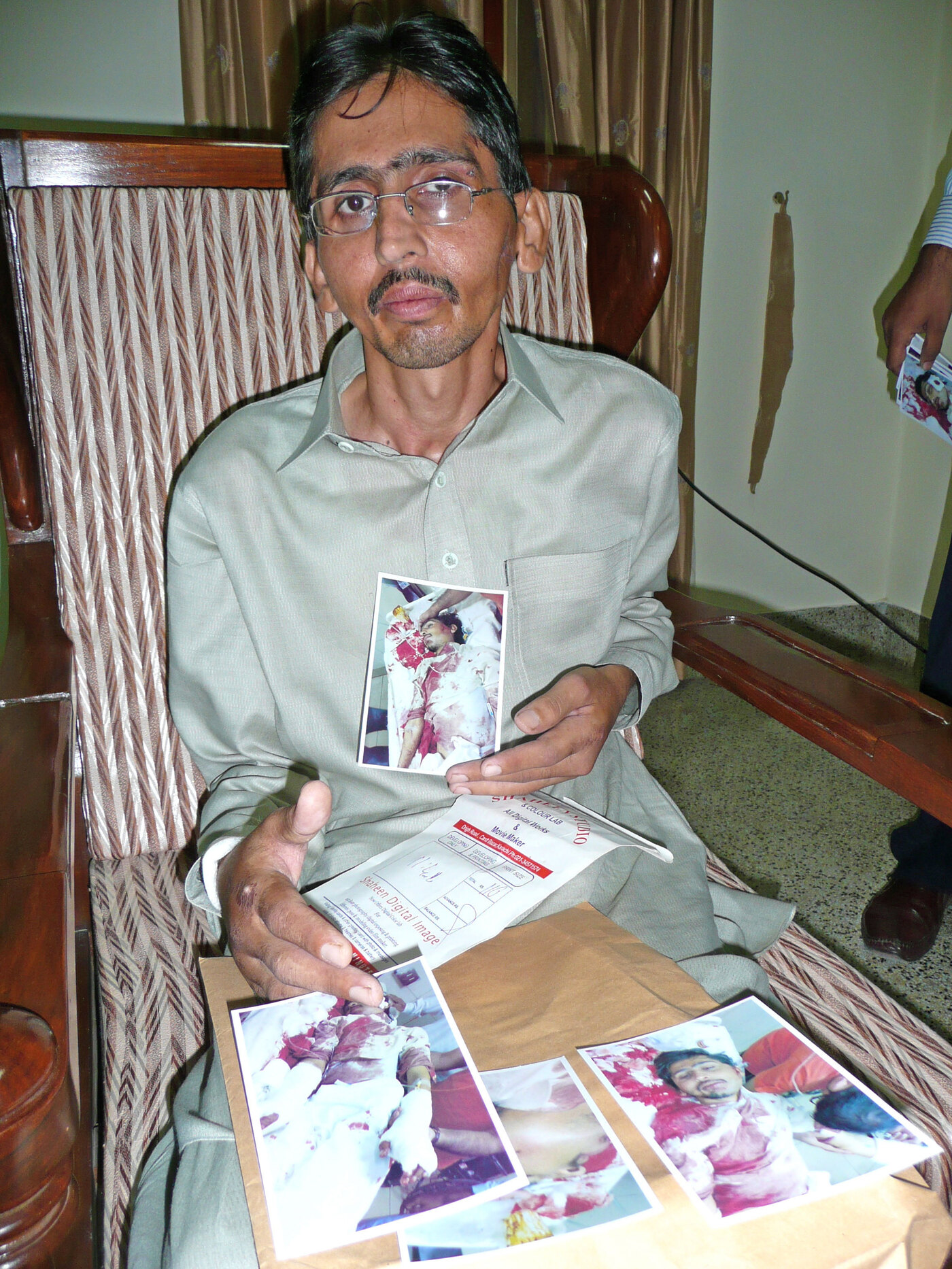 Mohammad Aslam Bhatti, 34, shares photos of himself taken after he was shot in the head, torso and arm by militants he says were motivated by Aamir Liaquat's TV program.

A Surge In Targeted Killings

Since that broadcast, violence has left hundreds of Ahmadis dead. Ahmadi Najm's husband — a pediatrician with his own clinic — was one of them.

"It was the 17th of August, 2010," Najm recalls. "He was closing his clinic, and had just started his car, and they came — some unknown people. They fired. At the spot, he was dead. He got about 30 bullets in his chest."

The 33-year-old widow speaks from a safe house in Karachi, where Ahmadis hide during bouts of violence against them.

Behind a padlocked door, Najm and her three children huddle together. Her baby girl was just 2 1/2 months old when her father was killed.

And there are many others at the safe house: a man whose 80-year-old father was gunned down while watering his garden. Another whose 30-year-old son was killed after a newspaper published his address. And a survivor — 34-year-old Mohammad Aslam Bhatti, whose jaw is wired shut after a bullet passed through his head.

"I put my hands like this, to ask, 'Why are you killing me? Please spare me," Bhatti says. "They just opened indiscriminate fire. And then I fell down." 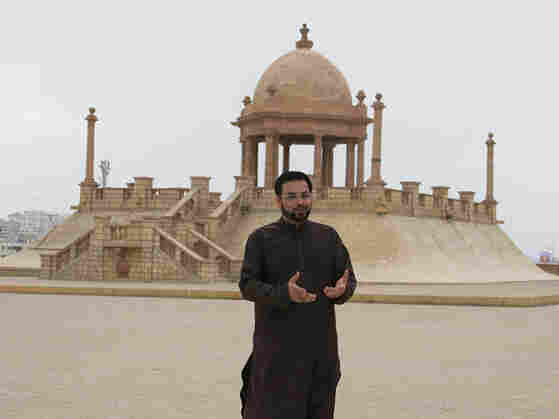 Liaquat has recently returned to Geo TV, Pakistan's top TV channel, amid much fanfare and an even bigger salary. The president of Geo TV, Imran Aslam, says one condition of Liaquat's rehiring is that he sign a new code of ethics. Courtesy of Geo TV hide caption 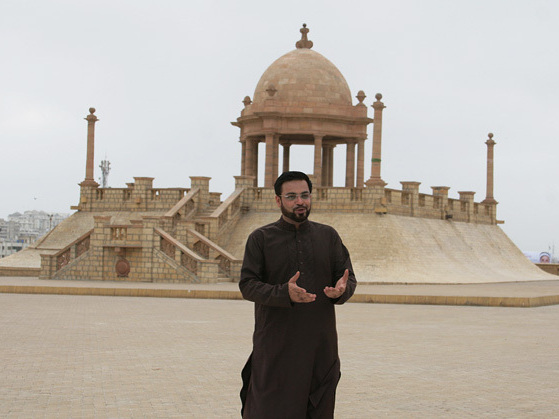 Liaquat has recently returned to Geo TV, Pakistan's top TV channel, amid much fanfare and an even bigger salary. The president of Geo TV, Imran Aslam, says one condition of Liaquat's rehiring is that he sign a new code of ethics.

No suspect has been arrested in any of these cases. Ahmadis have long been persecuted in Pakistan, but community leader Masood Ahmed Khan says targeted killings surged after Liaquat's broadcast.

"So we as a community always blame him. You know, the blood on his hands doesn't mean that he killed somebody directly — but he instigated it," Khan says.

Liaquat refused multiple requests from NPR for an interview, but sent a message through his manager emphasizing his popularity in Pakistan.

He lost his job at Geo TV over the Ahmadi program and the violence that ensued. But a rival channel scooped him up before long. And this summer, Liaquat returned to Geo TV with fanfare — and an even bigger salary.

"How can you bring back a person who's been accused — not only by the Ahmadi community, but by a lot of people? There's so much evidence there," Paracha says. "How can you call the same guy back?"

That's a question for Liaquat's boss, Imran Aslam, the president of Geo TV.

"He is a broadcaster par excellence. But he must know his parameters," Aslam says.

He says he rehired Liaquat on the condition that he sign a new code of ethics.

"We wanted to know whether he had, I wouldn't use the word 'repented,' but certainly [would be] a little more careful," Aslam says.

Still, the TV executive acknowledges that bringing Liaquat back could be a gamble.

"Not only the Ahmadis, but there's a large section of the liberal population of Pakistan, which is fearful of what he could unleash. So it's a double-edged sword," Aslam says. "The guy could become a Frankenstein monster — I don't deny that. But I think he's been chastised a bit — and chastened a bit, too."

So Liaquat is back on TV, more popular than ever. For the slain pediatrician's widow, Najm, that's scary proof that intolerance is accepted — even rewarded — in Pakistan's mainstream media.

Najm says her children face it in schools, from classmates as young as 6 or 7.

"Their fellows ask, 'Are you Shia or are you Sunni? Oh, you're Ahmadi? Ahmadis are not Muslims,' " Najm says.

Pakistan's government has a media regulation group whose job is to police the airwaves for hate speech. But the group, which goes by its acronym PEMRA, has opened few investigations in its 10-year history — and none in defense of religious minorities. Critics accuse the agency of bowing to popular media figures like Liaquat, rather than doing the job it was created to do.