Accessibility links
North Adams, Mass.: A Manufacturing Town For Art In a valley at the foot of the Berkshire Mountains, a struggling industrial town is making an artistic comeback. North Adams is now home to MASS MoCA, one of the largest museums of contemporary art in the world — housed in 26 former factory buildings. 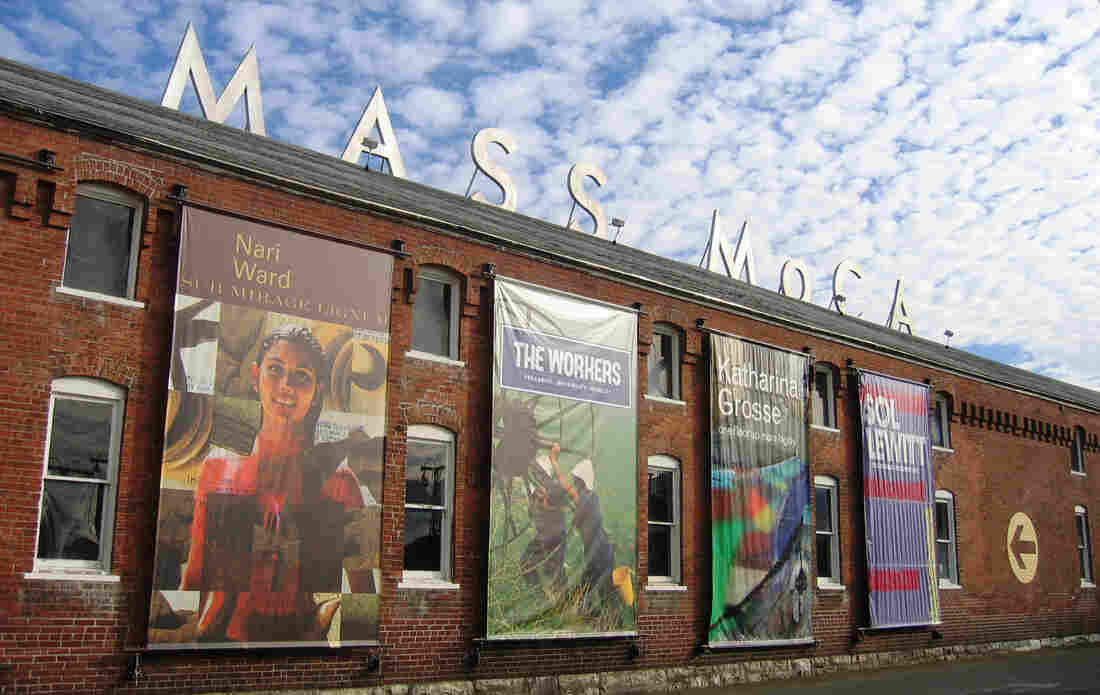 In a valley at the foot of the Berkshire Mountains, a struggling industrial town is trying to make an artistic comeback. North Adams is now home to MASS MoCA, one of the largest museums of contemporary art in the world — housed in 26 former factory buildings. MASS MoCA hide caption

If you ever decide to visit one of the largest museums of contemporary art in the world, prepare yourself: It's a little intimidating. First, you have to drive to upper Massachusetts, just south of the Vermont border, where you'll behold 26 hulking brick buildings: We're talking 600,000 square feet of raw, sunlit space, roughly equivalent to a mid-sized airport. 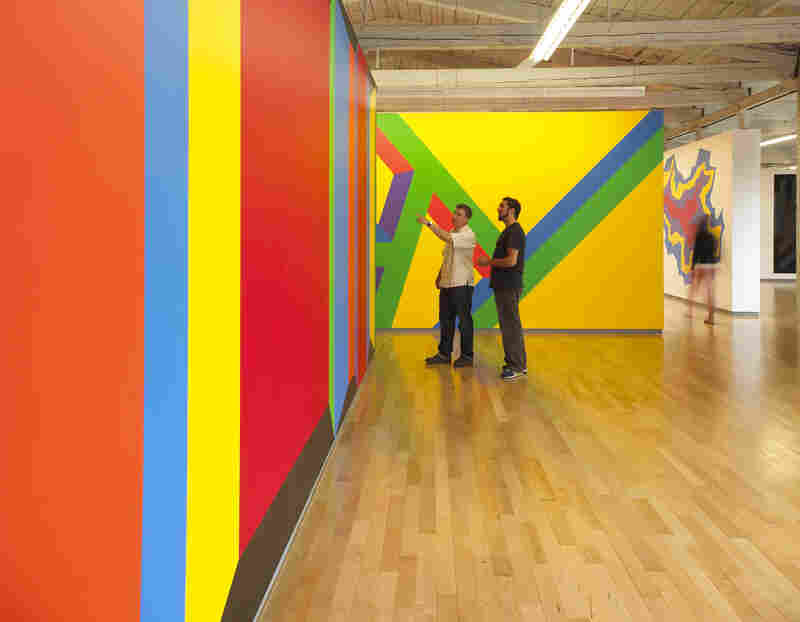 Sol LeWitt: A Wall Drawing Retrospective includes 105 of LeWitt's large-scale works. It will be on-view at MASS MoCA until 2033. MASS MoCA hide caption 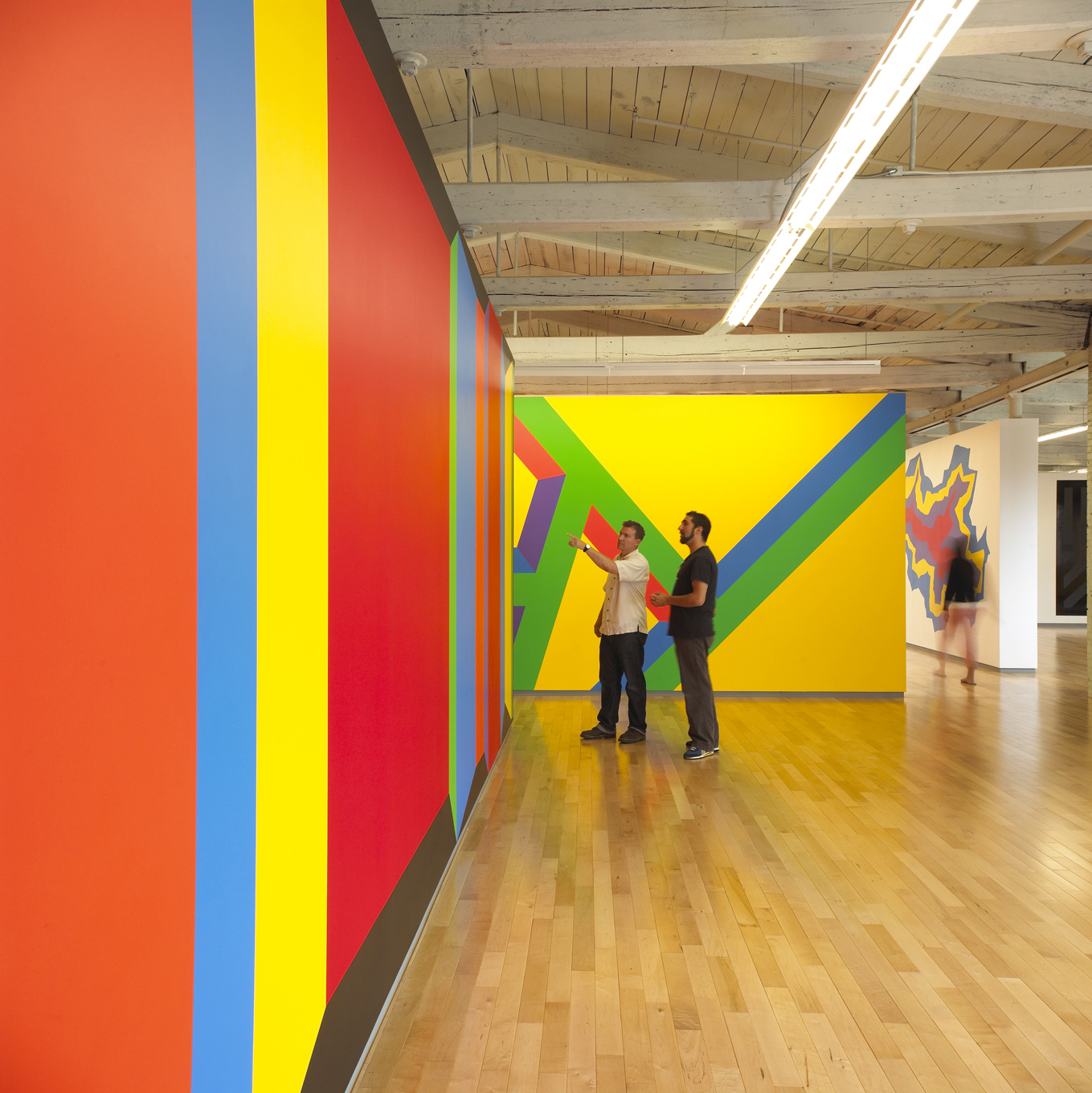 Sol LeWitt: A Wall Drawing Retrospective includes 105 of LeWitt's large-scale works. It will be on-view at MASS MoCA until 2033.

Among other treasures, MASS MoCA boasts an extraordinary room of more than 100 wall-sized drawings by artist Sol LeWitt and a sound installation crafted out of a rusty interior bridge by Glenn Kotche, the drummer for the band Wilco. The entire place was created as an audacious experiment intended in part to revitalize North Adams, Mass. Like many other crumbling mill towns across New England, its economy was gutted when manufacturing moved overseas.

MASS MoCA's director, Joe Thompson, recalls his chat with an old-timer nostalgic for the museum's former incarnation as a textile plant, back in the days when work was work and industrial dye did not count as pollution.

"She said, 'Oh, growing up it was so beautiful because on Tuesdays, the rivers flowed vermilion. On Wednesdays they were bright green.' She said you could practically keep track of the days by what color the river was. She said it was just marvelous!"

It was just a very, very different time. Our Main Street was like the mall at Christmas.

"If you're coming over the mountain and look down, it looks like we're in the palm of God's hand," he says.

Alcombright remembers when it seemed like everyone in North Adams had a job. Today, more than 20 percent of North Adams' citizens live below the poverty line.

"It was just a very, very different time," he says. "Our Main Street was like the mall at Christmas. As a matter of fact, every Saturday you came to Main Street. Everything was in Main Street."

Today, Main Street looks a little forlorn, symptomatic of the global forces that have buffeted the city. After the textile industry moved overseas in the 1930s, the factory started making electronic components. And when that industry moved overseas, North Adams lost 3,000 jobs. Little was left but a grimy old factory and fading Victorian charm. Still, economics professor Stephen C. Sheppard, of nearby Williams College, finds it charming. He studies the effects of museums on local economies. 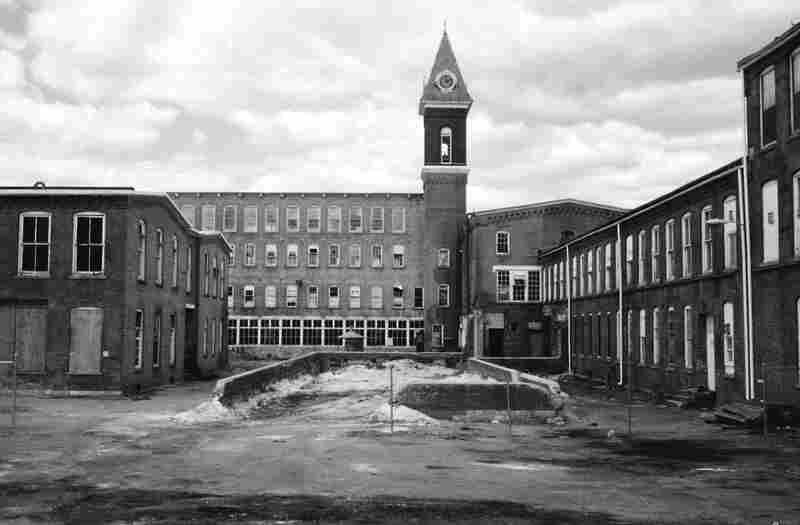 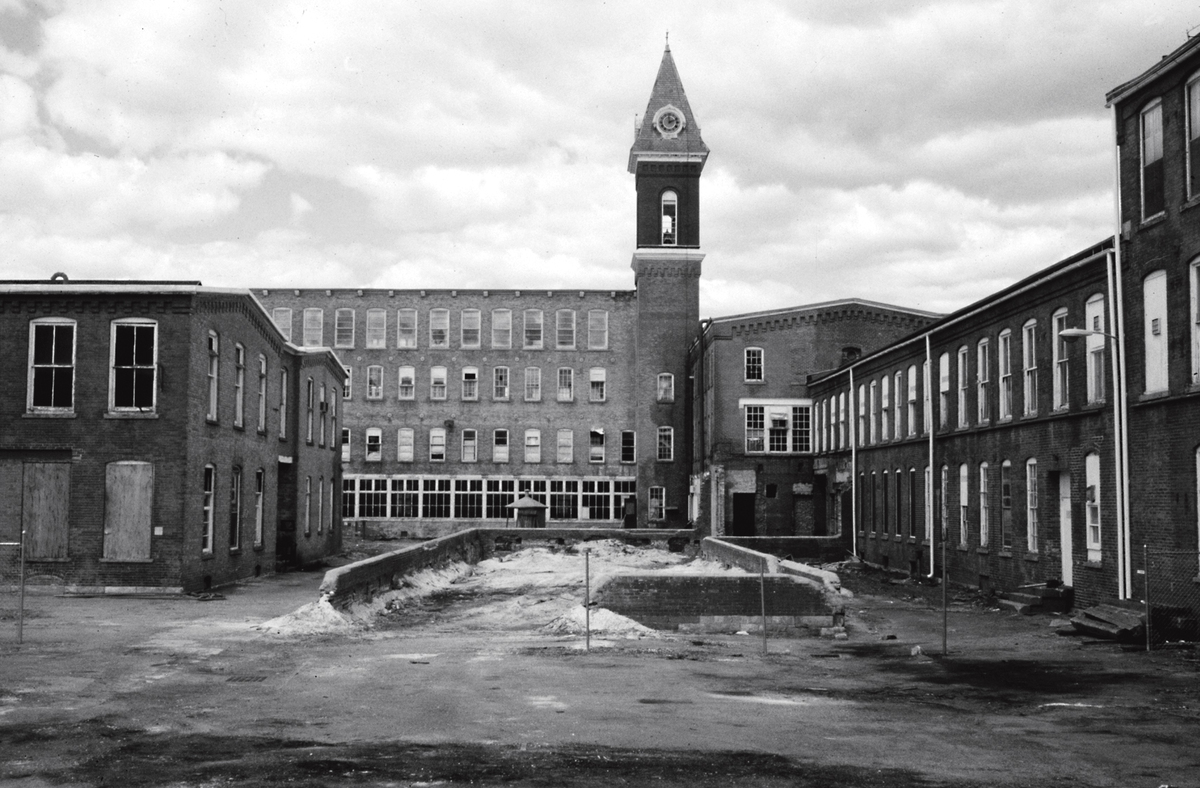 "There was an initial assumption that having MASS MoCA would transform this Main Street to be like it was in 'the olden days,' " he says.

At first, backers estimated the museum would create more than 600 jobs. Sheppard says that's turned out to be fewer than 300. He thinks there was overreliance on an idea that became popular about 10 years ago: That post-industrial cities could turn themselves around by putting in art galleries and developing economies based on what bestselling author Richard Florida called the creative class.

But the idea of helping to save a city through art is partly what lured Jonathan Secor to North Adams from New York City. He runs the Berkshire Cultural Resource Center, a nonprofit that supports a smattering of small galleries downtown. Secore remembers when everyone thought MASS MoCA would solve all of the town's problems.

It was supposed to be "The Fix," he says. "It's not The Fix. Main Street is still not feeling it and so then we opened Gallery 51 and that was going to be The Fix. Three years later, it's not quite, and then we opened DownStreet Art."

Something's growing here. I'm interested to see where it's going to go.

"Something's growing here," she says. "I'm interested to see where it's going to go."

Now, townies can be a bit more skeptical about how much art has changed North Adams. In a local dinner, a grizzled biker named Reggie Roy pronounces North Adams about the same. He's lived here for 41 years, and he admits he's never been to MASS MoCA.

The museum is dynamic and unstuffy. It favors up-and-comers, not superstars, and lacks the kind of artwork so wildly famous, people flock to North Adams just to see it. MASS MoCA director Joe Thompson says there may have been some miscalculation about how the museum could tap into the area's booming arts tourism. 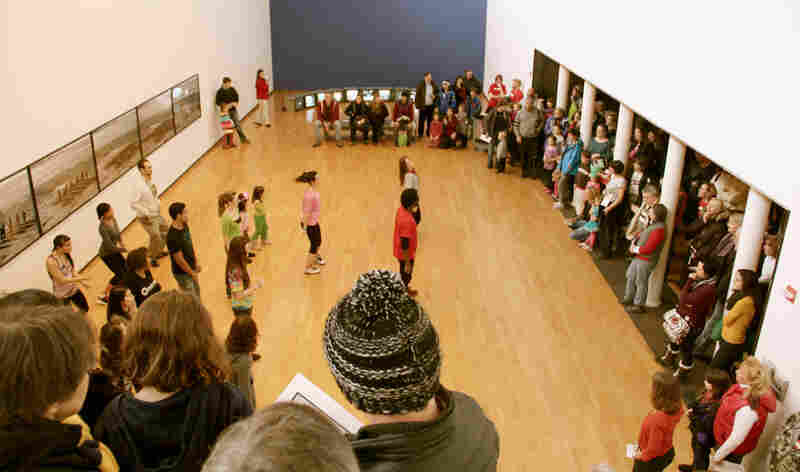 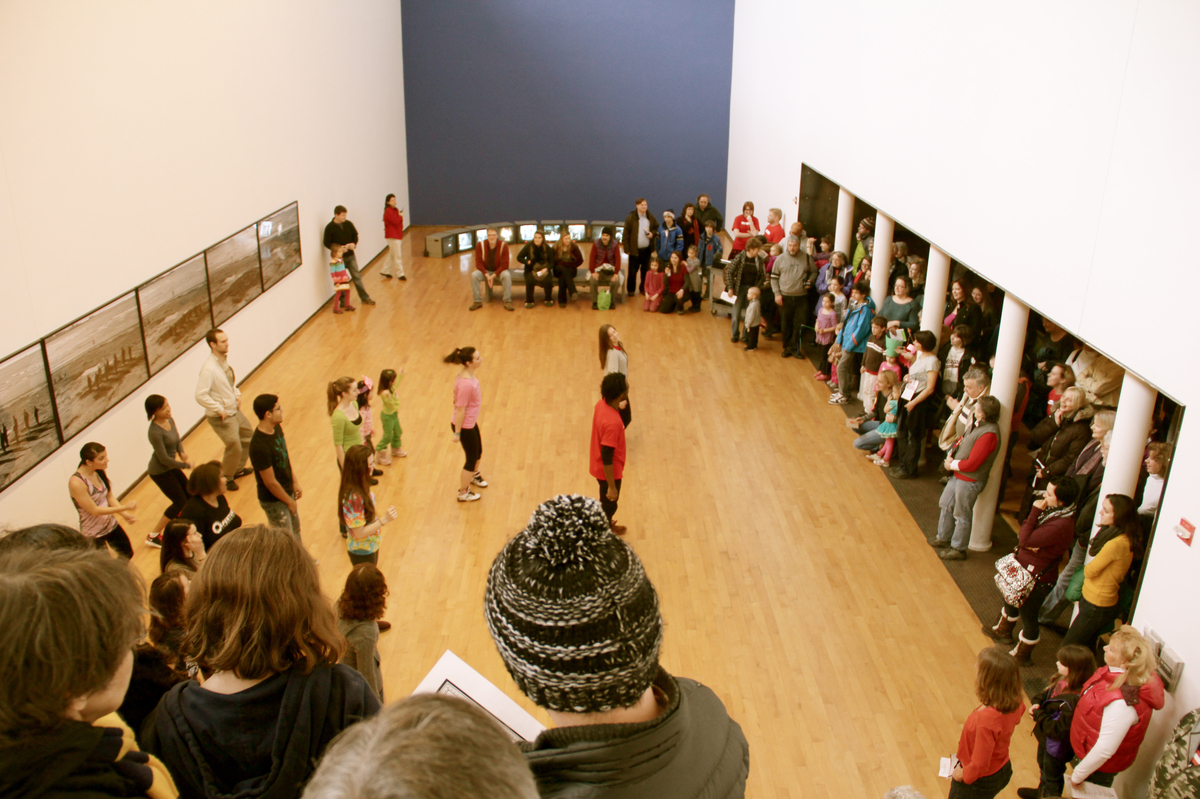 "There's like two and a half million people a year who come to Berkshire County," he says." Very few of them attend multiple institutions."

Meaning music fans go to Tanglewood, theater buffs to Williamstown and dance nerds hit Jacob's Pillow. There's not as much overlap as you'd think, although the institutions are working together to better capture audiences. And in terms of living, North Adams is too far away to attract the creative class of Brooklyn or Boston, even though you can buy a sweet live-work loft here for under $40,000. Still, according to MASS MoCA, the museum draws more than 120,000 visitors every year. Thompson says it contributes $15 million annually to the local economy. He remembers taking former factory workers through the old buildings during renovation. He was stunned when one called it "horrible."

"And I said, what do you mean, 'horrible'? And she said, 'It's so light,' and I said, mostly we as human beings like light," he recalled. "And she said, 'Oh no. It's terrible. It's so light and empty and when we worked here, these windows were covered. There were bookshelves in front of them and parts bins, and it was dark and full of activity and jobs. And now it's just light. And empty."

What this factory makes now cannot be measured in bales or boxes — and it can never be what it was hoped it could replace.