Accessibility links
Don't Charge That Electric Car Battery; Just Change It Some drivers in Israel now have electric car batteries that never need to be charged. They can just pull into Better Place, a company that has built battery changing stations designed to be just as convenient as gas stations. 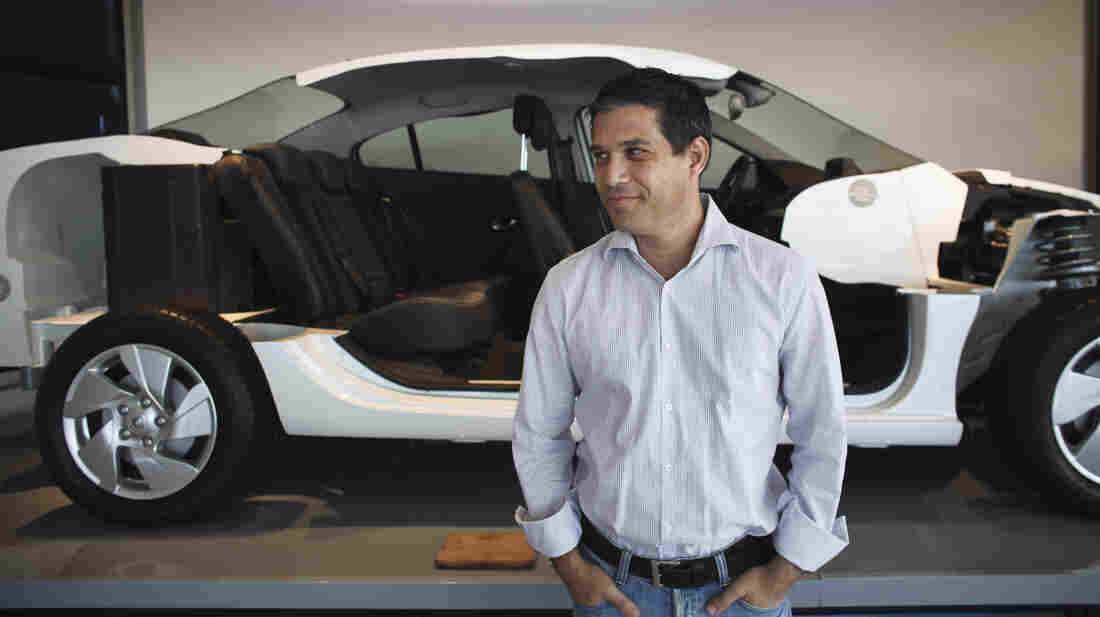 Better Place is building a network of electric car battery changing stations throughout Israel. The idea is to make changing a spent electric battery as easy as pulling into the gas station for gasoline. Here, Better Place CEO Shai Agassi is shown in front of a cutaway model of an electric car at the company's showroom in Tel Aviv earlier this month. Tara Todras-Whitehill for NPR hide caption 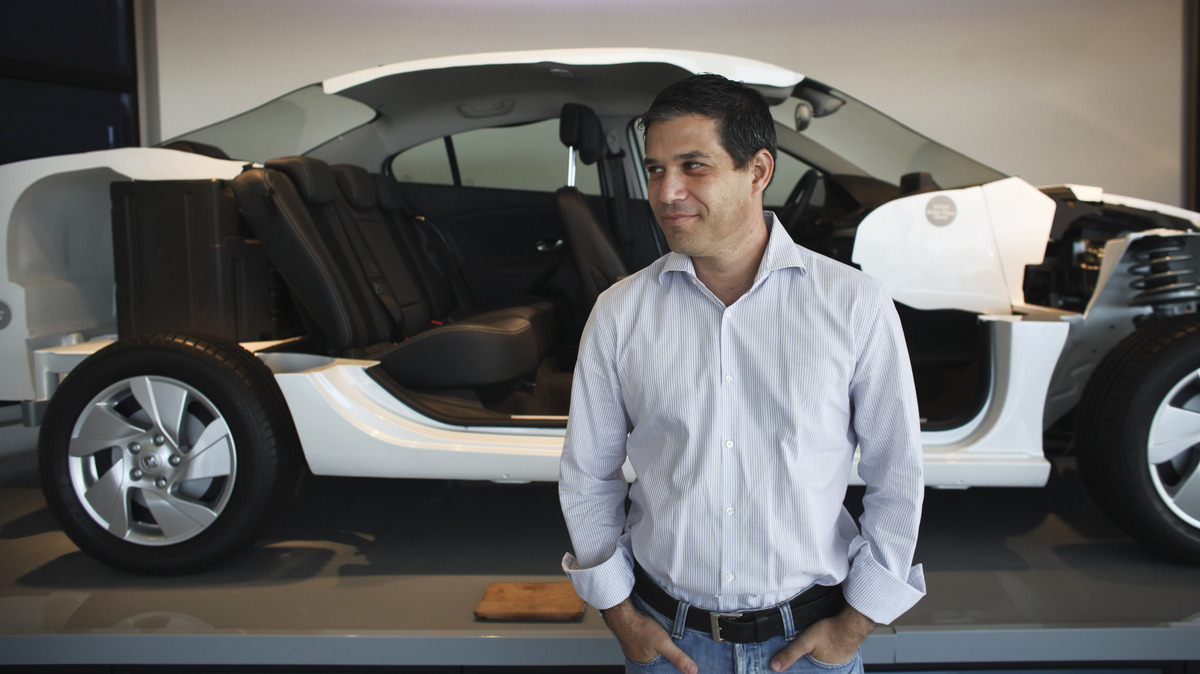 Better Place is building a network of electric car battery changing stations throughout Israel. The idea is to make changing a spent electric battery as easy as pulling into the gas station for gasoline. Here, Better Place CEO Shai Agassi is shown in front of a cutaway model of an electric car at the company's showroom in Tel Aviv earlier this month.

It looks like a bright new car wash, but it's a battery swapping station for electric cars in Israel. When a vehicle pulls up, it is slowly pulled through a conveyor. The spent battery is taken out and replaced with one that is fully charged. The entire process takes less than five minutes.

Better Place, a company based in Palo Alto, Calif., is the company that wants to spread this model around the world. It's taken several years and it's been a bumpy ride, but the company has now established a network of car battery replacement stations in Israel and Denmark.

The idea is to make battery replacement as quick and simple as filling up at a gas station, and thereby convince people that owning an electric car is just as convenient as owning one that's gas powered. If it works as planned, drivers of electric cars would no longer have to wait hours to recharge their electric batteries at an outlet.

Amit Lechim, who has had one of the Renault electric cars for about a month, says using the battery-switching station is proving relatively easy.

"Once you get used to it, it's wonderful, wonderful," he says. While the car is expensive to run, he says, at least he doesn't have to pay for fuel.

"And with the crazy prices of the gas, it's nice to know that you know how much you are going to pay," says Lechim.

A gallon of premium gas currently runs more than $9 in Israel, which has some of the most expensive gasoline in the world, according to a report published by Bloomberg last week.

Plugging In The Electric Car

The high price of gas is one incentive for Israelis to switch to electric cars. Also, Better Place is hoping that in a small country where drivers tend to travel relatively short distances, drivers will almost always be near a battery-changing station. That's one of the reasons Israel and Denmark where chosen as places to build the networks at this stage.

Better Place was launched in Israel in 2007, but it wasn't until this year that it actually got its electric cars on the road. The cars are being made by Renault in collaboration with Better Place.

So far, 17 battery-swapping stations are set up around Israel. The plan is to have up to 40.

But it has been a slow start for Better Place. There have been costly delays in rolling out the cars. According to Israel Corp., a stakeholder in Better Place, the company lost more than $200 million last year alone.

Since its launch in July, Better Place has sold 300 cars in Israel, far fewer than it would like. CEO Shai Agassi acknowledges that sales haven't been consistent.

He thinks the company lost a lot of potential consumers by not passing on the tax breaks the company got from the Israeli government. He says when the company first announced its plans, it cited a price that was extremely low by Israeli standards, where taxes on cars are upward of 50 percent. Now, five years later, the car is rolling off at triple that price.

"For some people it would appeal to them, but I would think that the numbers would be marginal and nowhere near the numbers, the 20 and 30 and 40 and 50 percent of the auto market that Better Place was forecasting," Rabinowitz says.

But Better Place says it isn't deterred. In addition to Israel and Denmark, the company hopes to have battery-changing stations soon in parts of the U.S. and Australia.