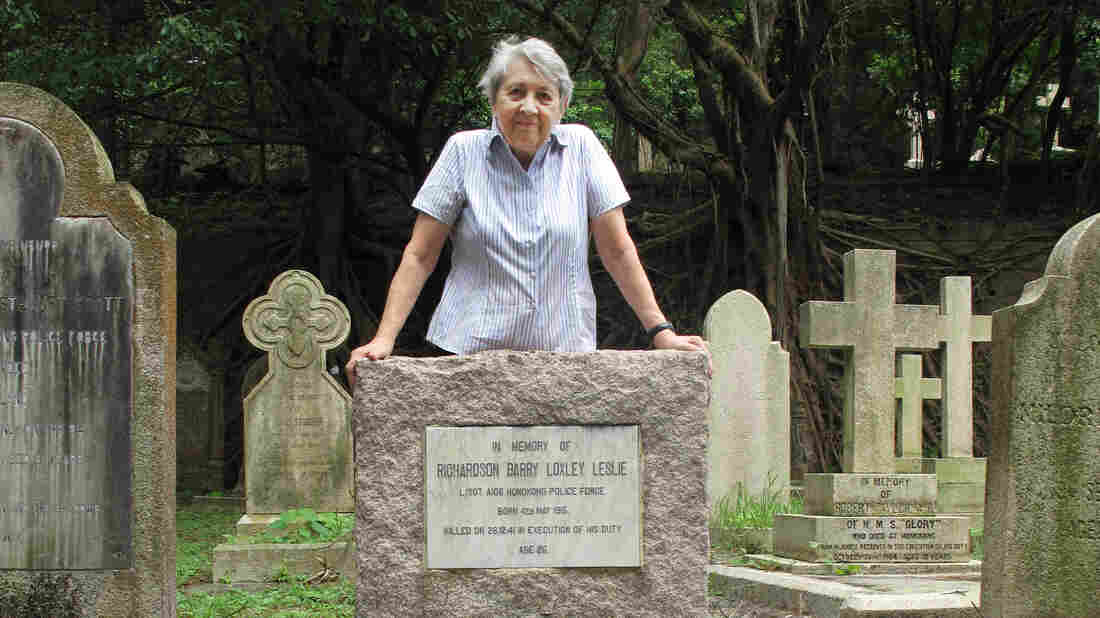 For more than a decade, author Patricia Lim researched the 8,000 graves of the Hong Kong Cemetery, one of the city's oldest Christian cemeteries. Here, Lim stands at the grave of former Hong Kong police officer Richardson Barry Loxley Leslie. Last year, she rested on the grave while, unbeknownst to her at the time, she was having a mild heart attack. Louisa Lim/NPR hide caption

Below a noisy flyover alongside Hong Kong's Happy Valley racecourse, there's a little-noticed green oasis stretching up the hillside, punctuated by imposing Victorian chest tombs, granite obelisks and delicate angels. This is Hong Kong cemetery, the last resting place of the early settlers who colonized the island, starting in the 1840s.

For my mother, Patricia Lim, the cemetery is a repository of the island's early untold early history.

"I was fascinated by the way Hong Kong had grown up, and nobody knew anything about it," she says. "All Hong Kong history is here. And Hong Kong people never realized. And almost nobody ever visited it."

She decided to remedy that by spending the past decade penning her love letter to the graveyard. This is my mother's third book about Hong Kong, and her most ambitious yet. 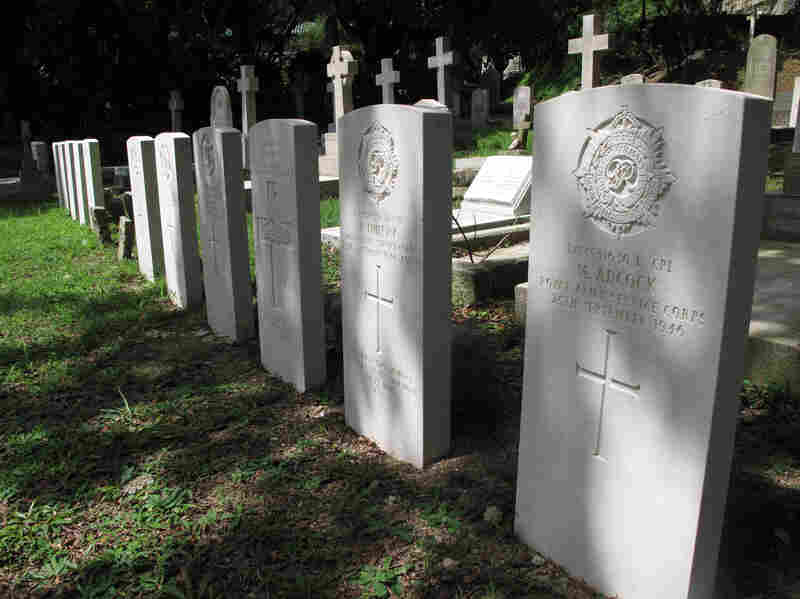 A series of identical graves mark the resting spots for 11 British soldiers, including Col. Cyril Wild. His plane crashed in 1946 en route to Tokyo,where he was heading to give evidence against Japanese army officers at the Tokyo War Crimes Tribunal. He'd been the only fluent Japanese speaker in the British army, and he helped negotiate the Japanese surrender in Singapore. Louisa Lim/NPR hide caption

By the time she finished, her initial idea for a simple pamphlet about the cemetery had grown into a 600-page book, Forgotten Souls: A Social History of the Hong Kong Cemetery, which retells the story of Hong Kong through the lives of those buried in Happy Valley.

Portrait Of Life On 'A Barren Rock'

Nowadays, these overgrown memorials are pretty much all that remain of those lives. These were not the elite — the colonial governors and administrators — but the ordinary people who built Hong Kong and gave their lives to do so: the merchants and missionaries, the opium traders and auctioneers, the prostitutes and pirates.

"Their stories were not told before I wrote my book," my mother says. "It's a social history. It's a history of the ordinary people."

The earliest graves belong to those who died during the first Opium War (1839-1842), which ended with Hong Kong's ceding to the British.

The very first memorial is a handsome pillar topped with an urn belonging to British Lt. Benjamin Fox, who died in 1841 after a cannonball shattered his leg as he was trying to capture high land north of Guangzhou — which lies across the modern-day border between Hong Kong and mainland China — during a skirmish in the first Opium War.

Despite the loss of lives on their part, the British were not impressed with their new acquisition. British Foreign Secretary Lord Palmerston described the island of Hong Kong as "a barren rock with nary a house upon it," and concluded, incorrectly as we now know, "It will never be a mart for trade."

The lives of the early settlers were precarious, often ending prematurely and brutally. One police constable, Ernest Goucher, died in 1915 after a tiger mauled him. Others met their end in similarly gruesome fashion: being shot by pirates, hijacked by bandits and poisoned by bread laced with arsenic. 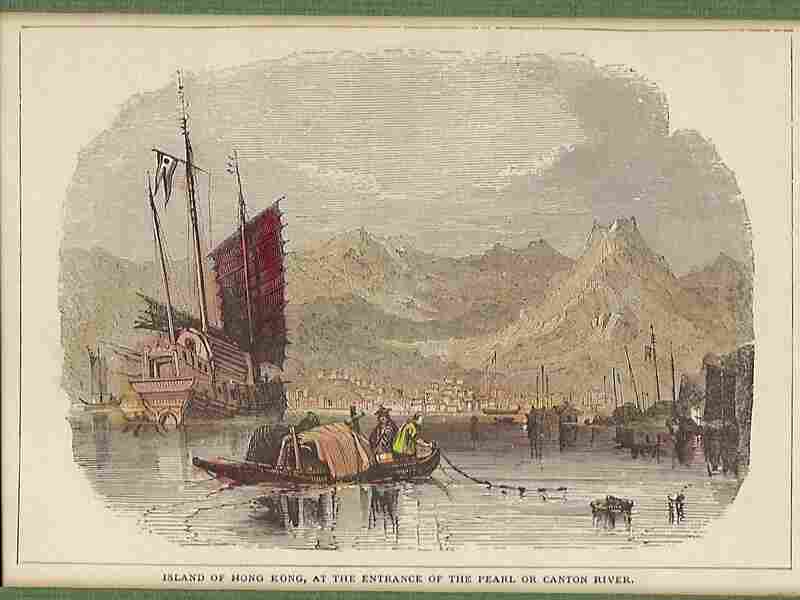 An early picture of the island of Hong Kong. In 1841, the British Foreign Secretary Lord Palmerston criticized the deal that gave Hong Kong to the British, famously describing the island as "a barren rock with nary a house upon it." He predicted, "It will never be a mart for trade." Courtesy of Hong Kong University Press hide caption 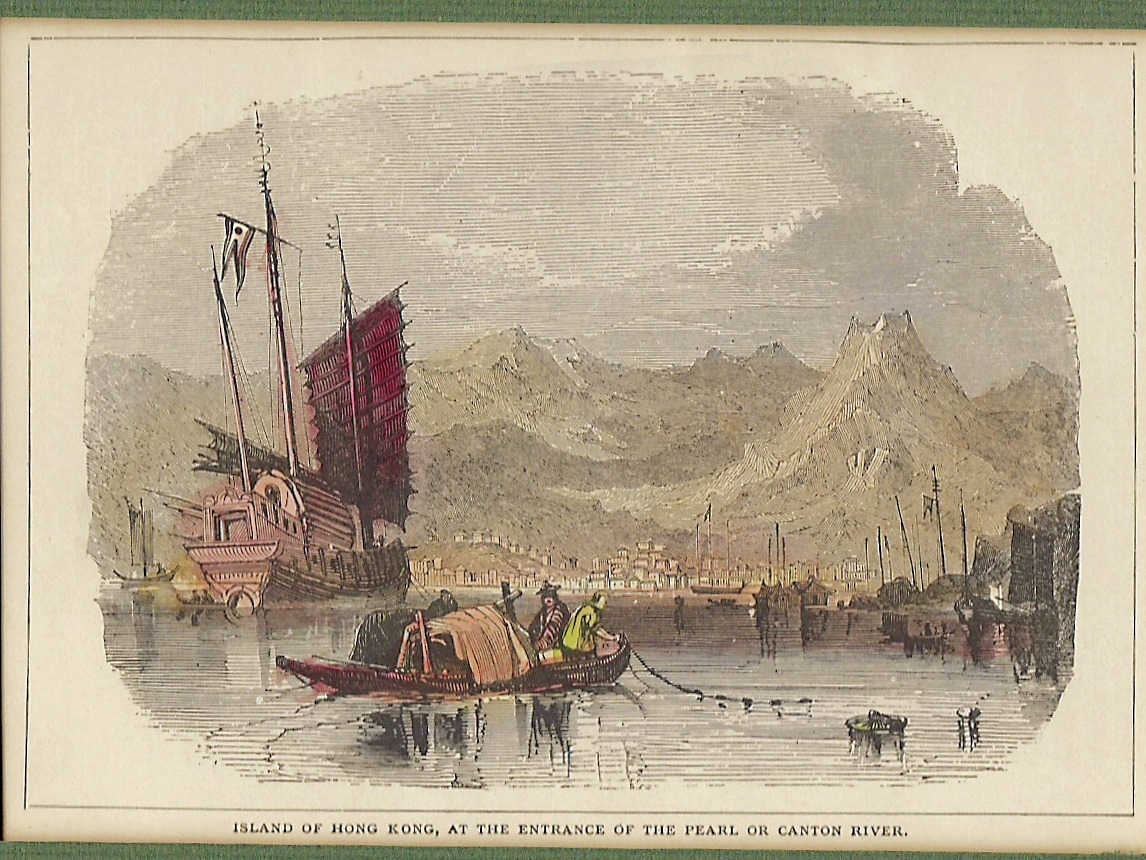 An early picture of the island of Hong Kong. In 1841, the British Foreign Secretary Lord Palmerston criticized the deal that gave Hong Kong to the British, famously describing the island as "a barren rock with nary a house upon it." He predicted, "It will never be a mart for trade."

More numerous still were the victims of disease, particularly cholera and dysentery, though even sunstroke was a killer in those days. The average life expectancy of a colonial policeman in the late 19th century was just 31 years.

Untimely deaths have become a stock-in-trade for my mother, who mapped the cemetery's 8,000 graves, recording their epitaphs and tracing their stories through contemporaneous newspaper accounts, letters home and diaries.

It's not the familiar story of today's city of verve, entrepreneurialism and shiny skyscrapers. It's a tale of a rough-and-tumble place that — as one inhabitant, Richard Collinson, described it in 1844 — "has been built almost in a day," much of it by dodgy characters.

Men like Charles Markwick, described by my mother as "a swashbuckler, who owned riverboats, had a tavern, had a shop, was an auctioneer and a smuggler. He was so rich he ate off beautifully embossed silver plates."

He was strangled in his bed in 1857, and his murderer was hanged, after the British threatened to bombard the village sheltering him.

But many settlers led model lives, such as Henrietta Shuck from Kilmarnock, Va., the first Western woman to set foot in Hong Kong. The American missionary arrived there, newly married at age 17.

She died a decade later in 1844, as her epitaph sums up, "in the prime of life, in the midst of her labors and in the meridian of her usefulness."

Shuck died of exhaustion, my mother says. And no wonder: She gave birth to five children, managed a household of 37 people and taught in the newly established school. She also concerned herself with the well-being of others, and described the condition of the wives of Western soldiers in Hong Kong as being "worse than that of the slaves in Virginia." 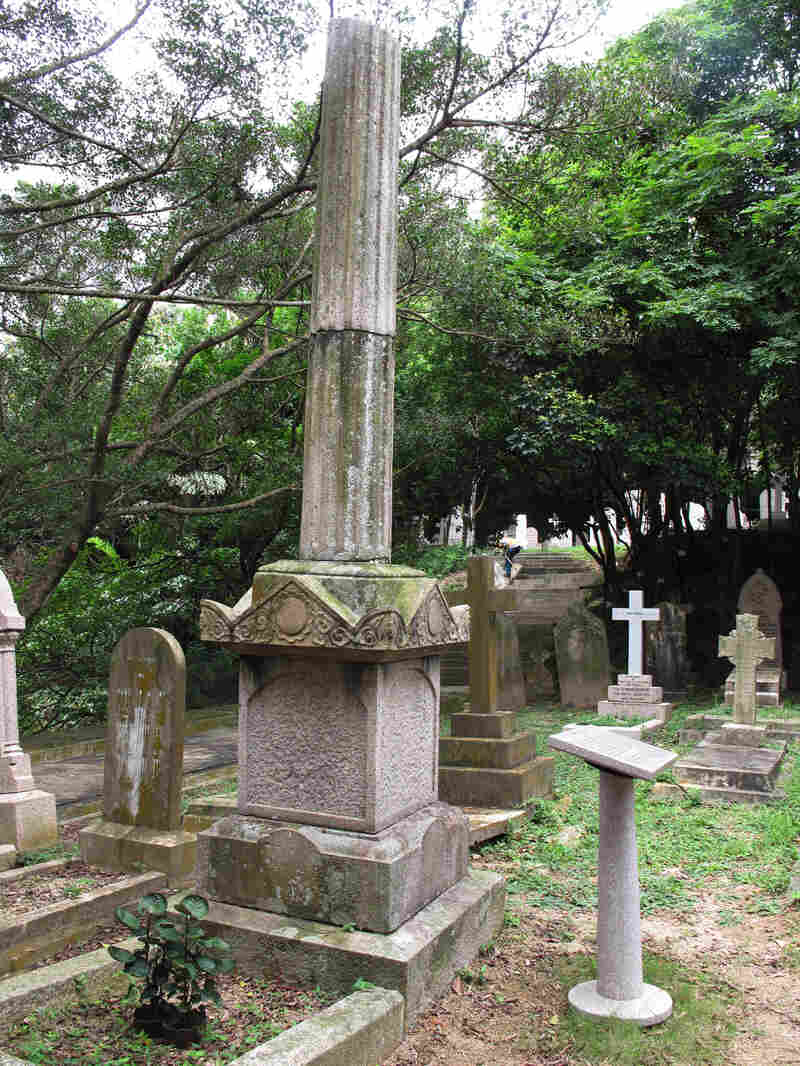 This lopped-off pillar was raised to the memory of Yeung Ku-wan. The revolutionary had already helped organize two failed uprisings to overthrow the last dynasty of China, the Qing, one of which cost the lives of 48 men, when he was murdered in 1901. His tombstone was left uninscribed, for fear of desecration and heightening tensions with the Chinese. Louisa Lim/NPR hide caption 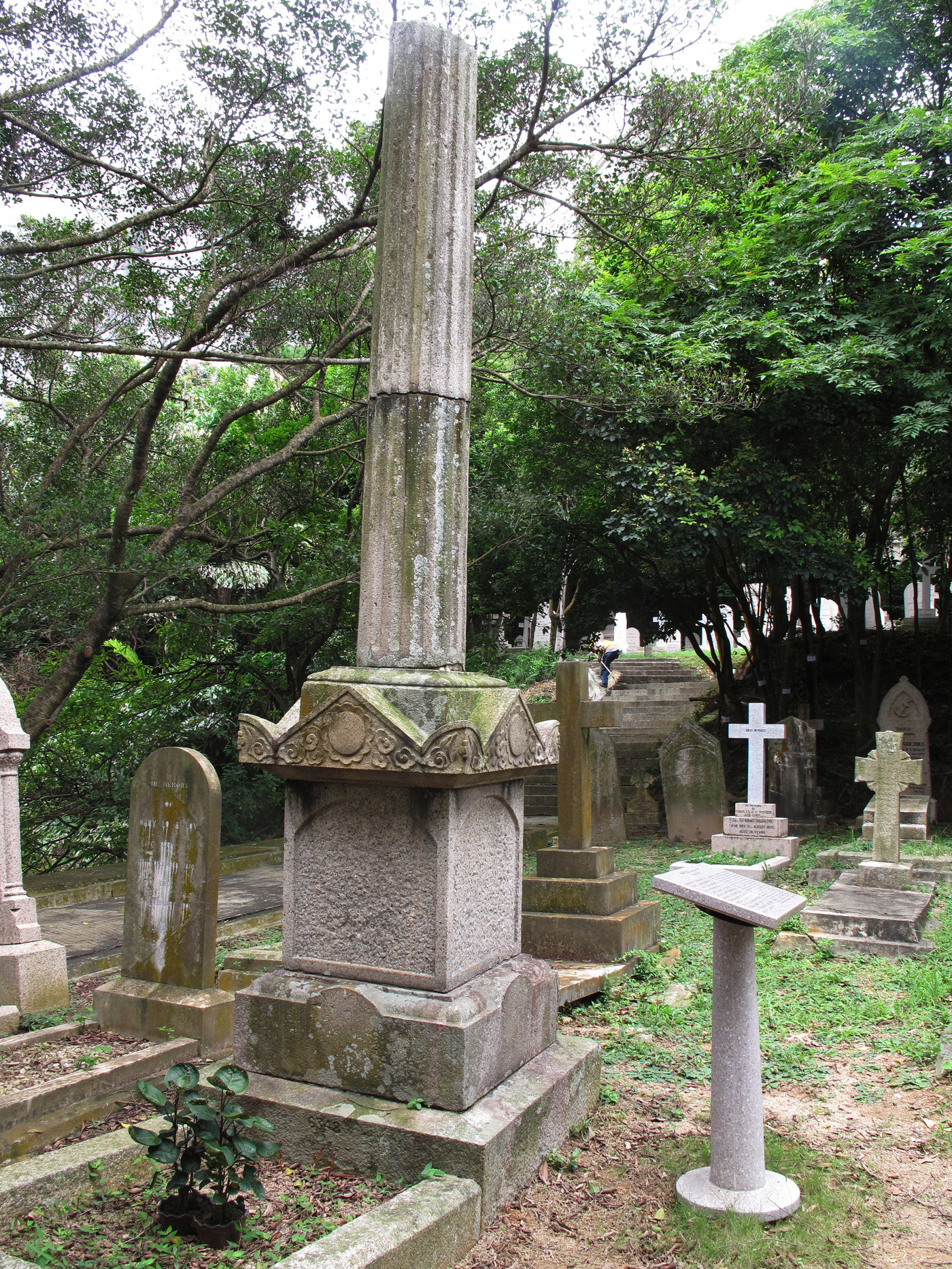 This lopped-off pillar was raised to the memory of Yeung Ku-wan. The revolutionary had already helped organize two failed uprisings to overthrow the last dynasty of China, the Qing, one of which cost the lives of 48 men, when he was murdered in 1901. His tombstone was left uninscribed, for fear of desecration and heightening tensions with the Chinese.

Life was so hard back then, my mother calculated, that female missionaries, on average, died after only four years in Hong Kong.

'Not A Sexy Subject'

My mother's fascination with the graveyard isn't shared by my father, Lim Poh Chye.

"As a Chinese, this is not my kind of thing," he says of the cemetery, which he's always viewed with a superstitious sense of dread. He reacted "with horror" when my mother decided to write about the cemetery, promptly trying to dissuade her.

"It's not a sexy subject," he says, describing his view of graveyards as grounded in Chinese tradition. "I always go to cemeteries, but we always go there at festival times like Ching Ming [a holiday during which Chinese remember and honor their ancestors, also known as Tomb Sweeping Day] to pay respect. You don't come here as a sort of recreation, to look at the graves and admire, learn the history. It's all dead and gone."

Nevertheless, one grave illustrates how potent legacies can be, even in death. The resting place of Yeung Ku-wan is marked by a pillar, lopped off halfway up to show he died suddenly in his prime, in 1901.

Unusually, there's no inscription. My mother attributes this to the fact that he had been plotting to overthrow China's last imperial dynasty, the Qing, when he was murdered.

"He was a revolutionary who supported Sun Yat-sen, and he might have become the leader of the revolutionaries and the father of the Republic of China," she says. "But the empress' agents came to Hong Kong and shot him on his doorstep in Gage Street."

"The British were secretly in favor of revolutionaries, so they allowed him to be buried here, but they didn't want to upset China, so they refused to have an inscription," my mother says. "The British always liked to play things two ways." 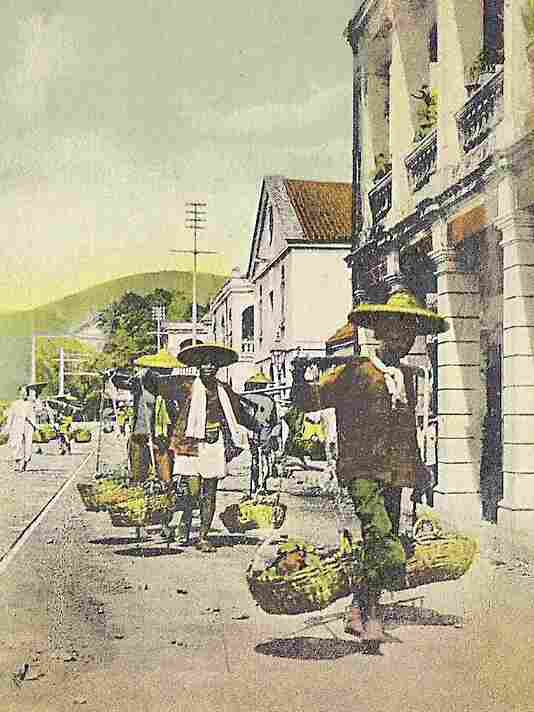 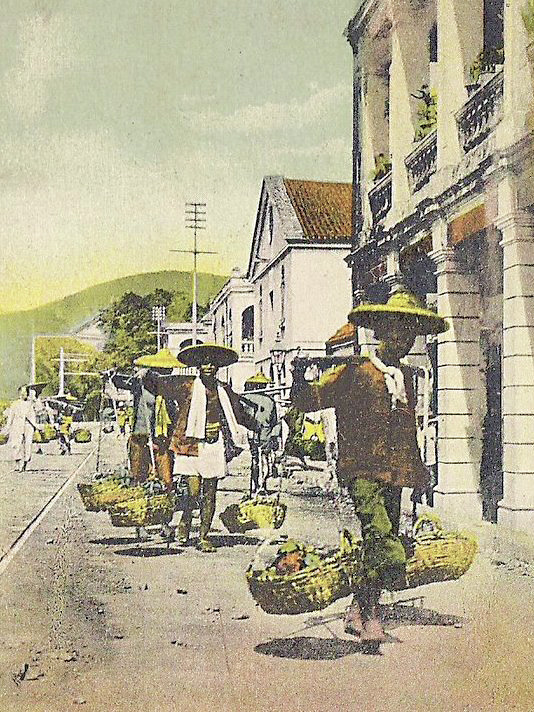 Hawkers carry goods for sale along the street in early Hong Kong.

This omission was remedied late last year, when the Hong Kong government erected a plaque by the grave to mark Yeung's life and death.

A Reversal Of The Usual Order

My mother's passion for the graveyard almost left her there — permanently.

Last year, on an extremely hot day, she was conducting a tour of the cemetery, when she suddenly felt unwell. So she lay down to recover, on the grave of Richardson Barry Loxley Leslie. As she puts it: "I borrowed his grave, and I'm sure he doesn't mind."

She later discovered that she had suffered something known as "broken heart syndrome," similar to a minor heart attack, while on the grave.

"It's lucky you didn't die of that heart attack," I tell her. "It would have been an awful epitaph for your book, wouldn't it?"

"It might have sold a few copies," she responds, laughing.

Close to the gates of the cemetery, we meet two groups of local students from Ng Siu Mui secondary school touring the graveyard.

"It's very important," says their teacher, Y.N. Tam, to "teach them something about Hong Kong history."

It's the first time my mother has seen schoolchildren here, learning about Hong Kong's history from the ground up. She's delighted.

Her book opens with the words: "Death and life is a reversal of the usual order." And through her writing, she has breathed life back into the stones, retelling Hong Kong's history, and along the way bringing life back to the graveyard.