Accessibility links
In Wisconsin Swing County, Voters Criticize 'Handouts' Many voters in Winnebago County feel that under President Obama, the government has tried to do too much. "I'm not a big fan of how big the government's gotten or how many people are living off the government now," says farmer Charlie Knigge. 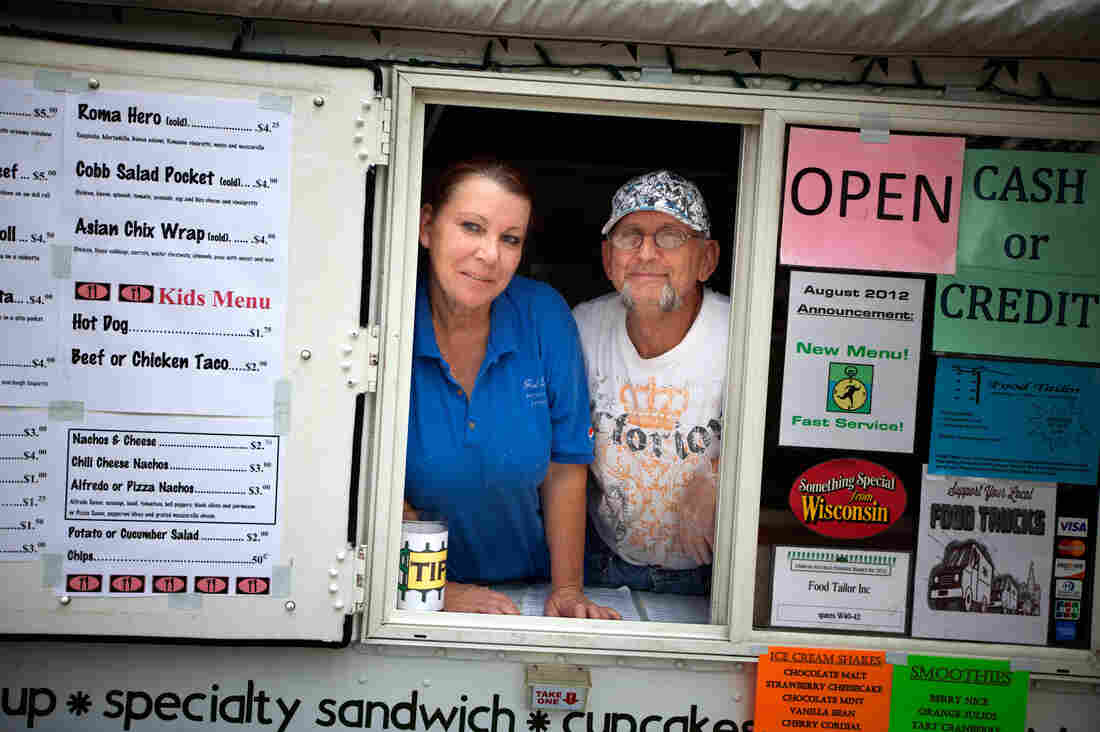 Patricia and Steven Cumber run the Food Tailor food truck in downtown Oshkosh, Wis. It's their primary source of income after Steven lost his job as a welder. John W. Poole/NPR hide caption

As the presidential election nears, Morning Edition is visiting swing counties in swing states for our series First and Main. We're listening to voters where they live — to understand what's shaping their thinking this election year. This week, we're spending time in Winnebago County, Wis.

We began our conversations in the lakeside city of Oshkosh, at a cafe on Main Street. But now, we're heading outside town to the Winnebago County Fair, where I was eager to taste Wisconsin's most famous food: cheese curds.

We headed to the first food stand we could find.

Judith Koeppl calls this her diner-on-wheels. With cropped bleach-blond hair and a cigarette in hand, she's a one-woman show, frying up whatever customers order.

"I've been doing this since I was 21," she says. "My first paying job was when I was 10. I had permanent beer stands at State Fair Park for 38 years. I call this my semi-retirement now."

Koeppl, who also raised her children on her own, says the secret to running a business as a single mom is "love of family, having pride, not going to the system for a handout."

Koeppl says she believes too many people are expecting handouts from the government these days, and she blames the current administration. 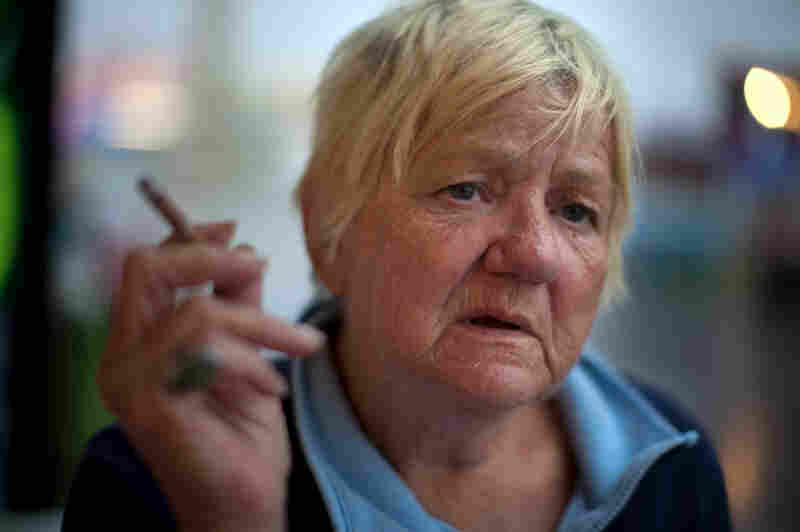 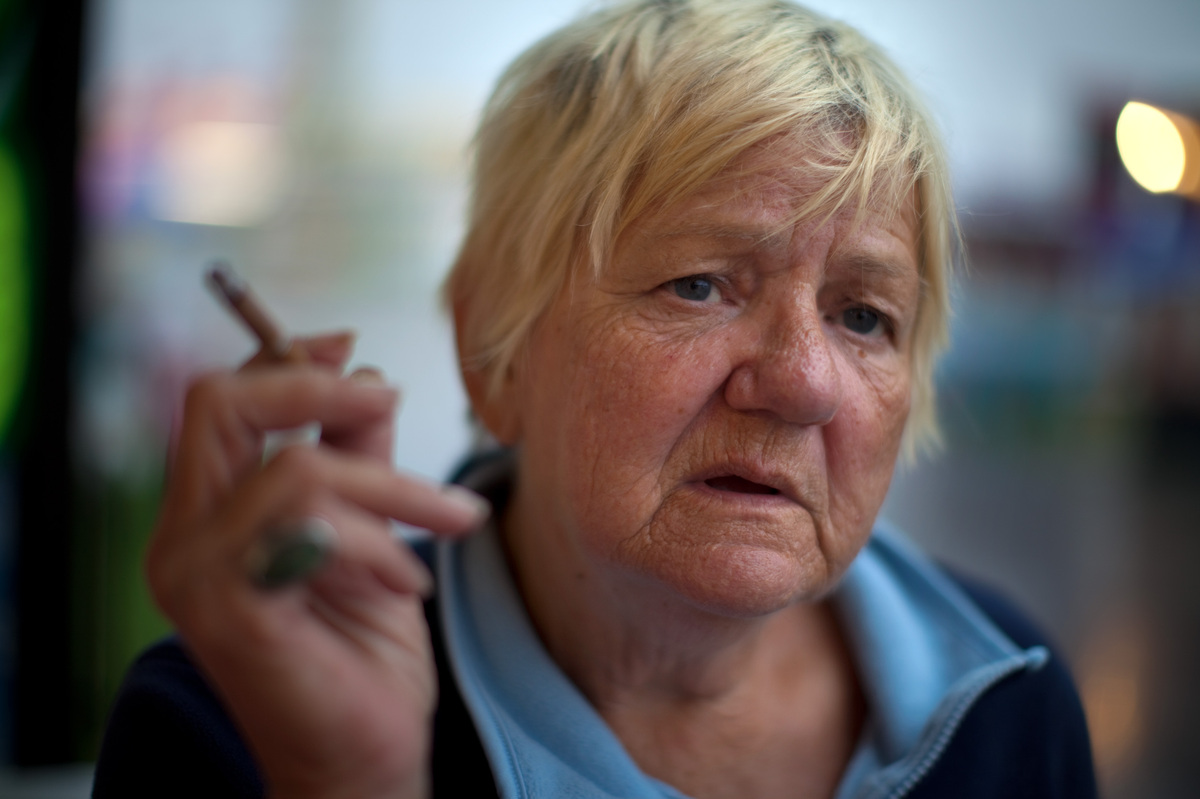 Judith Koeppl runs Judy's South of the Border "diner on wheels" at the Winnebago County Fair.

This is what's on her mind this election year. She plans to support Republican Mitt Romney.

"I don't like seeing our country become a socialistic country," she says. "And I think that's where it's headed for right now."

Worries On The Farm

It's something we heard a lot during our visit to Wisconsin — that under President Obama, the government has tried to do too much, and it's gotten too big. And in a county that went for Obama in 2008, that feeling is driving some people to Romney.

But there was a tension in some of the voices — in these hard times, people have lost jobs. Farmers have suffered through drought. So, some of the very people who bemoan the size of the federal government acknowledge it's a government that, at times, came through for them.

We walked through the fairgrounds — by the swinging pirate ship, the win-a-stuffed-animal games and the music tent, where a male a cappella group called the Blend was holding court.

Finally, we reached the dairy barn.

"That's a cow making some noise," says Charlie Knigge. "Just started raining a little bit — so she might be a little excited."

Knigge might be even more excited. Like so many Wisconsin farmers, he's been hit by the drought. 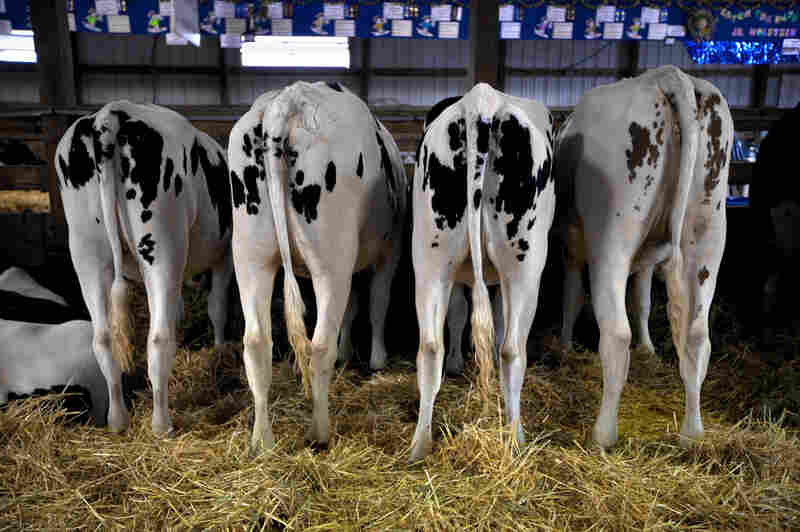 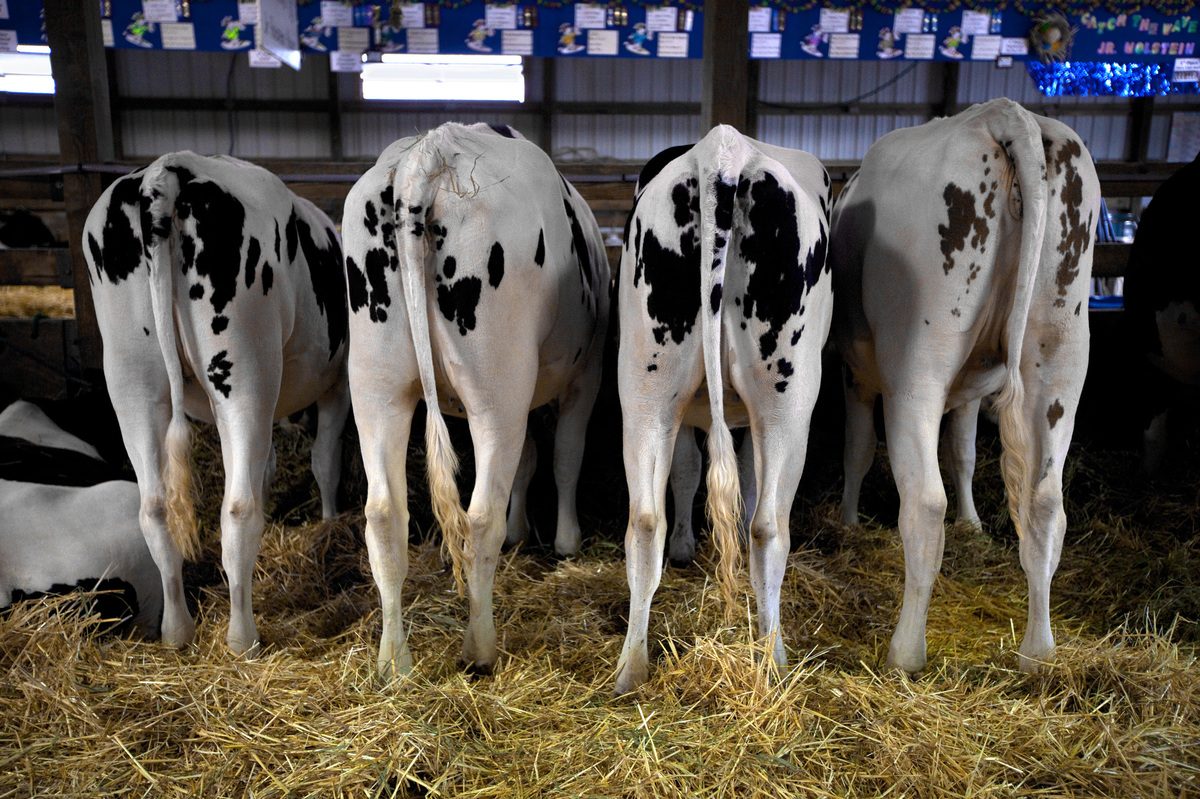 Dairy cows on show at the Winnebago County Fair in Oshkosh.

"All the farmers are smiling the last two days because it's rained pretty steady and we're grinning from ear to ear," he says.

Knigge has 130 cows on his farm. They depend on the alfalfa he grows — but because of the dry weather, some of his stalks are just 4 inches high; they should be 10 inches taller than that.

Knigge and I got to talking politics. He said he's leaning Republican. He's not all that enthusiastic about Romney — but he definitely wants a change.

"I'm not a big fan of how big the government's gotten or how many people are living off the government now," he says. "And I understand people have hardships with the economy and everything else, but, to me, it's — pretty soon, we've got to stand on our own feet and get up and get moving and not rely on somebody else helping us with that.

"I mean, America was founded on people getting up and going and making their own living and their own lifestyle. And I'm afraid we've gotten too far away from that."

Knigge does get some help from the government in the form of farm subsidies.

"We've been enrolled in the government programs," he says. "We don't get a lot of government support, we get some."

Does he see a contradiction there? 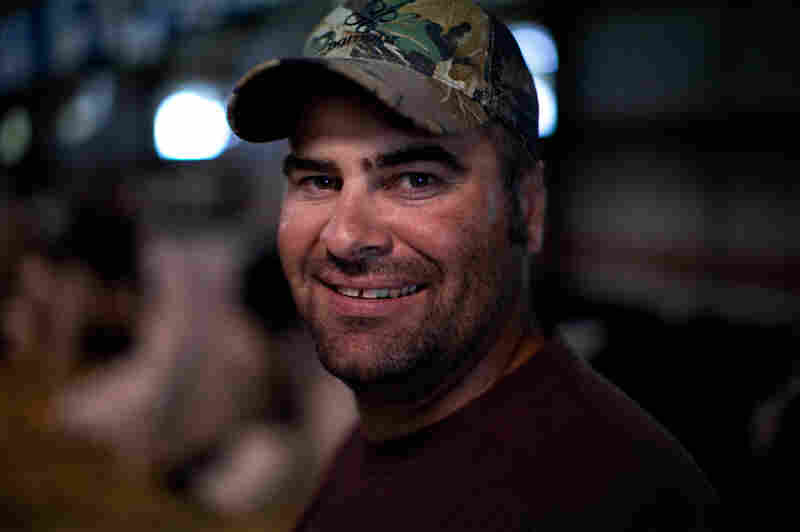 Charlie Knigge is a dairy farmer from Omro, Wis. He talked to NPR at the Winnebago County Fair in Oshkosh. "I'm not a big fan of how big the government's gotten or how many people are living off the government now," he says. John W. Poole/NPR hide caption 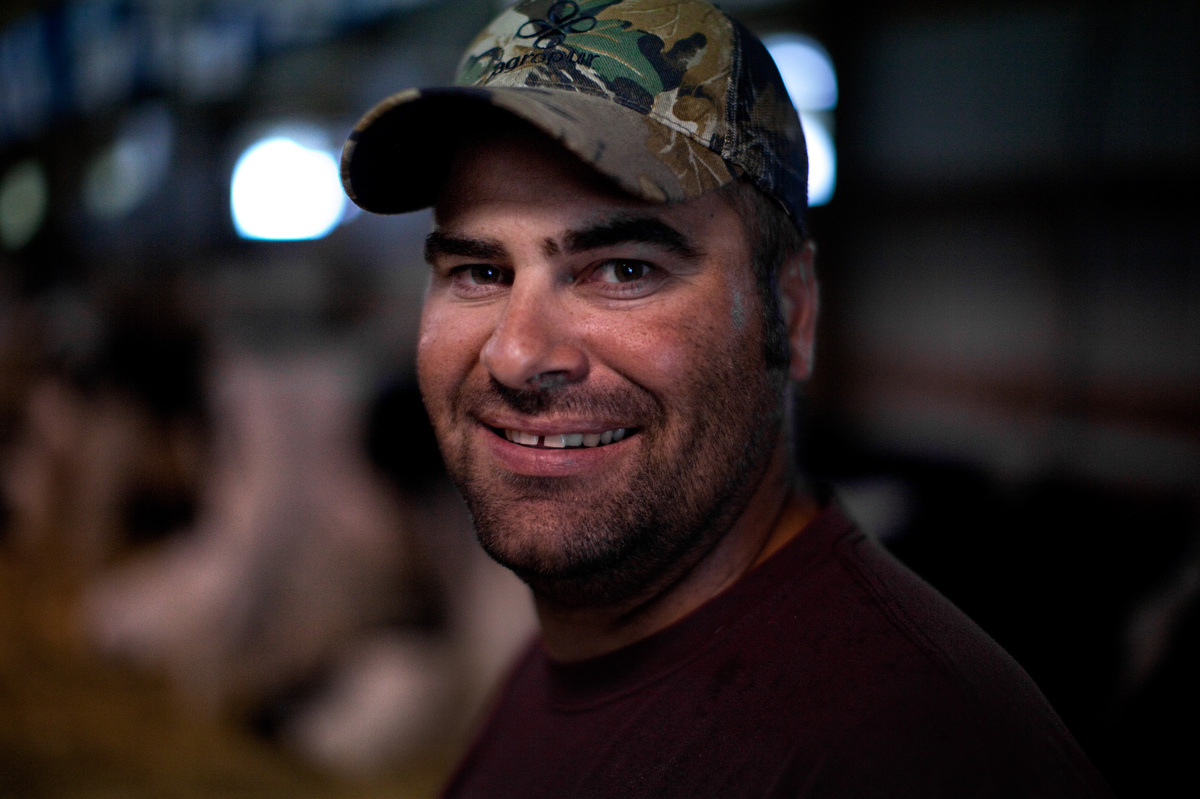 Charlie Knigge is a dairy farmer from Omro, Wis. He talked to NPR at the Winnebago County Fair in Oshkosh. "I'm not a big fan of how big the government's gotten or how many people are living off the government now," he says.

"The way I look at it ... we'll take advantage of the programs that are offered, but it's a very small portion of my income at all that comes from government subsidies or government programs," he says. "The issue I have is when people's primary income is money that comes from our taxes.

"I mean, I understand people can get welfare if they're laid off of work, which is fine — helps some people, gives them some time to get back on their feet and find another job. But I've got some friends in other industries that they're looking at hiring minimum wage or little better than that for just parking cars or working at a fast-food restaurant, something like that that they could have a job.

"But they're making more money being on welfare than they would if they get a $10-, $12-an-hour job. To me, that's not the mindset this country is built on and something that needs to be changed."

A few miles away from the fairgrounds, outside a county courthouse, we encountered much of the same sentiment from Patricia and Steven Cumber, who were working at their food truck.

Patricia, the quieter of the two, and Steven, who proudly sports a Hulk Hogan mustache, work long hours together, finding spots all around the county to sell their sandwiches — town squares by day, then at night, outside dive bars when the revelers emerge hungry at 2:30 a.m.

I made clear I didn't come just for food. When I ask if they know who they're voting for, Steven says, "We're not telling," but then Patricia chimes in with, "Mitt Romney." He agrees as she laughs.

One reason the couple's not thrilled with the current administration is that their lives have only gotten harder these past few years.

Patricia Cumber worked as a machinist for one of the big local manufacturers, Mercury Marine. But she took a buyout and started this food truck.

What she didn't know is Steven would soon be fired from his job as a welder. Now that his unemployment has run out, the truck is their only income — they're surviving, barely.

When it comes to health insurance, Patricia says, "I get the VA because I was in the military. Steve, he's out of luck."

Steven says he's healthy and has no family history of illness. If he does get sick, "I have to pay for it. I have to pay my way to live, don't I? Right? Because nobody else is taking care of that."

As for the new health care law, Steven Cumber says, "the people of this free country should have the right to take and say who we want, where we want it and how we want it."

But Patricia says she's worried that her husband is uninsured.

"I'll have to pay for it," she says with a laugh. "What if you get sick and you have to go into the nursing home?"

"I have children that I made, that I love and I'm there for them till the day I die," he says. "And what makes you think they won't tend for me as well? And I know that they will. You know, so I'm covered."

Scary enough that Patricia's ears perk up when Obama talks about making sure all Americans have health insurance. But her fears are outweighed by a mistrust of the government and a feeling that Washington is trying to make too many decisions for people.