Accessibility links
Humans' Role In Antarctic Ice Melt Is Unclear Ten years ago, a piece of ice the size of Rhode Island disintegrated and melted in the waters off Antarctica. Two other massive ice shelves along the Antarctic Peninsula had suffered similar fates a few years before. The events became poster children for the effects of global warming. But a new study finds that the story isn't quite so simple. 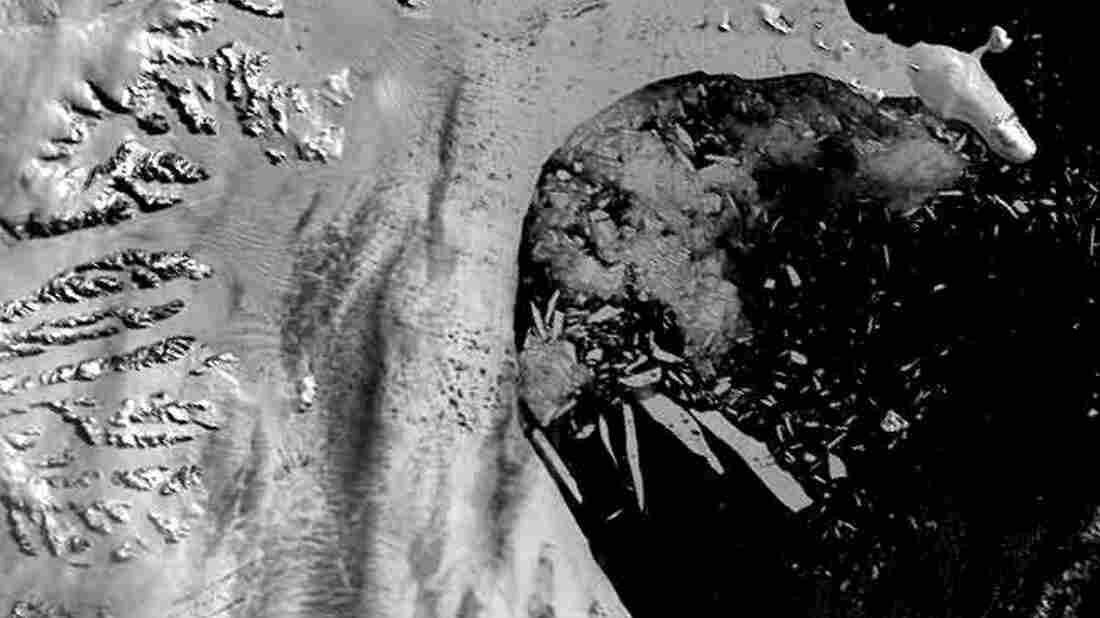 The Larsen B ice shelf, a large floating ice mass on the eastern side of the Antarctic Peninsula, shattered and separated from the continent 10 years ago. A NASA satellite captured the event in this image from Feb. 23, 2002. The 650 foot-thick, 1,250-square-mile ice shelf had existed since the last ice age. AP hide caption

Ten years ago, a piece of ice the size of Rhode Island disintegrated and melted in the waters off Antarctica. Two other massive ice shelves along the Antarctic Peninsula had suffered similar fates a few years before. The events became poster children for the effects of global warming. But a new study finds that the story isn't quite so simple.

There's no question that unusually warm air triggered the final demise of these huge chunks of ice. But a lingering question is whether these events can be attributed to human-induced global warming.

To probe that question, Robert Mulvaney and colleagues at the British Antarctic Survey drilled down 364 meters (more than 1,000 feet) and collected an ice core that tells the story of heating and cooling along the Antarctic Peninsula over the past 50,000 years.

Mulvaney says the sharp warming trend we're seeing now is quite unusual but not entirely unique.

"In the last 2,000 years there was another period around about the 1500s where we also saw a warming about similar to the rate of today," he says, but the temperature cooled again. "And then at about 400 A.D., we also saw not quite as great a warming there as well, but then it cooled again."

That finding, published in Nature magazine, raises an obvious question. Since there's a history of extreme temperature changes in this part of Antarctica, what can we say about the cause of the latest strong warming trend?

"I still think the jury must be out, whether you can attribute it one way or the other. I think this neither proves nor denies that this is a human-induced change," Mulvaney says.

And that makes this finding interesting not just for scientific reasons, but for political ones.

There's a very broad scientific consensus, based on many lines of evidence, that human changes to the planet are having a real impact on air temperature, sea temperature, droughts and melting ice. But Mulvaney knows that his more ambiguous finding is likely to be picked up by skeptics who are looking for evidence to argue that natural variability, rather than human activities, explain the Earth's rapid warming. So be it.

In fact, Mulvaney says when he started studying Antarctica in the 1980s, he was skeptical that humans were already affecting the climate and the ice.

"I think as the years have gone by I've moved considerably away from that early skeptical stance," he says. "And as I stand here now, you can't keep going year after year with most of the evidence all pointing in the same direction and not come to the conclusion that the climate is warming."

Another Antarctica expert, Eugene Domack from Hamilton College, says it is hard to distinguish natural cycles from human-caused trends in something as dynamic as ice. But he says these changes in Antarctica are mirrored with similar changes now in ice-sheet disintegration in the Canadian arctic.

"That tells you something is up that's more widespread than a local phenomenon," Domack says, adding that global changes are more likely due to human activity.

This question is obviously important because melting ice has historically raised and lowered sea levels dramatically. So knowing its fate matters a lot to the hundreds of millions of people who live near the coast.