Accessibility links
Attacks Raise Specter Of Radical Islam In Russia The Russian republic of Tatarstan was considered a model of moderate Islam coexisting with Christianity. But recent violence has fueled fears that the influence of foreign-trained radical imams may be growing in the region. Police blame Muslim militants; Tatar nationalists say Moscow is behind the attacks. 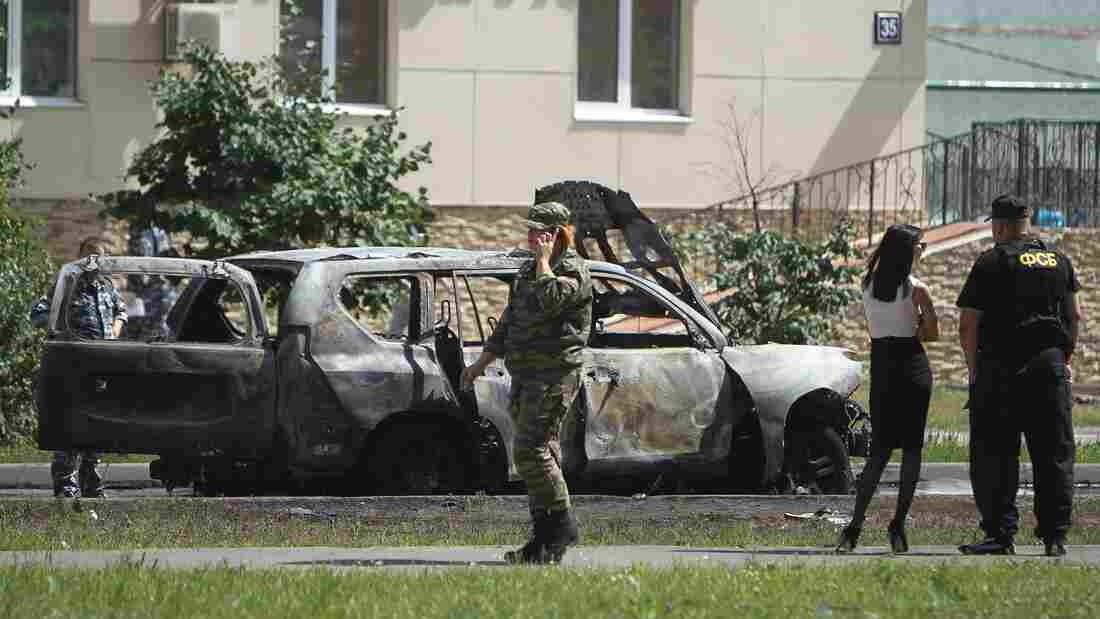 Police examine the site of a car bomb in the Russian city of Kazan on July 19. Ildus Faizov, the mufti of Tatarstan and the top Islamic leader in the region, was wounded in the explosion, while his deputy, Valiulla Yakupov, was shot dead in a separate incident on the same day. Roman Kruchinin/AFP/Getty Images hide caption 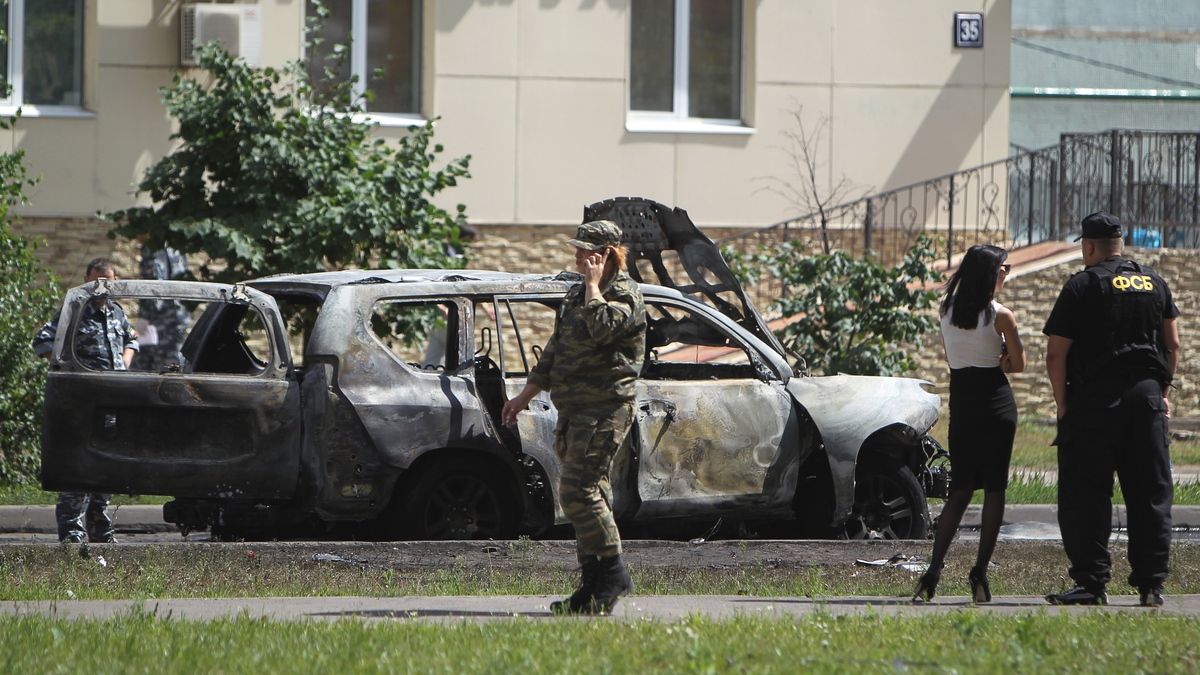 Police examine the site of a car bomb in the Russian city of Kazan on July 19. Ildus Faizov, the mufti of Tatarstan and the top Islamic leader in the region, was wounded in the explosion, while his deputy, Valiulla Yakupov, was shot dead in a separate incident on the same day.

Authorities in Russia fear that Muslim radicals are grasping for power in the central Russian republic of Tatarstan. Analysts say the radicals have infiltrated Tatarstan's Muslim establishment, seeking to undermine the moderate Islam that has co-existed with Christianity for centuries.

Some worry that Tatarstan could go the way of other predominantly Muslim republics, such as Chechnya and Dagestan, where clashes between Islamist insurgents and Russian security forces have taken thousands of lives.

Ildus Faisov — the mufti, or religious leader, of Tatarstan — had stepped away from the car just seconds before it exploded. He was injured, but survived. Earlier the same day, gunmen shot and killed one of the mufti's deputies at his home. 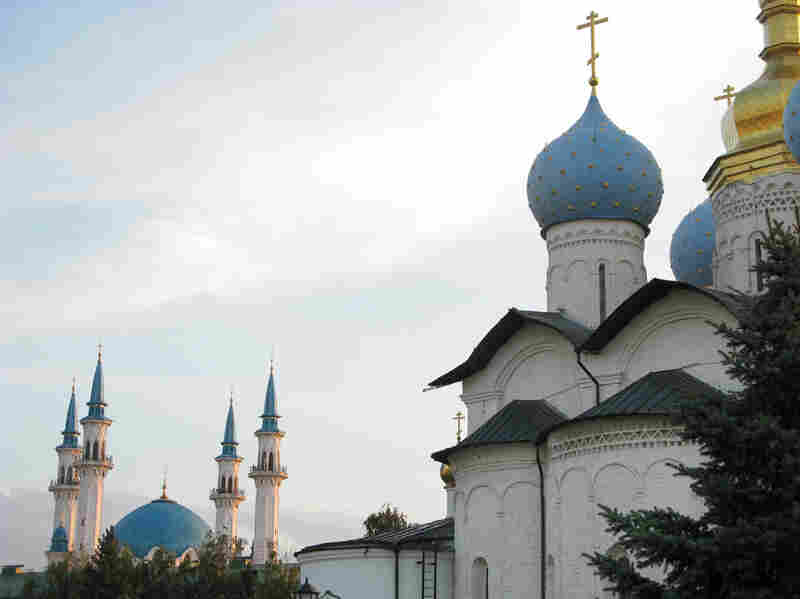 The domes of a Russian Orthodox church (right) share the skyline of Kazan, Tatarstan's capital, with the minarets of a Muslim mosque, a reminder of the city's history of peaceful coexistence between Christians and Muslims. Corey Flintoff/NPR hide caption 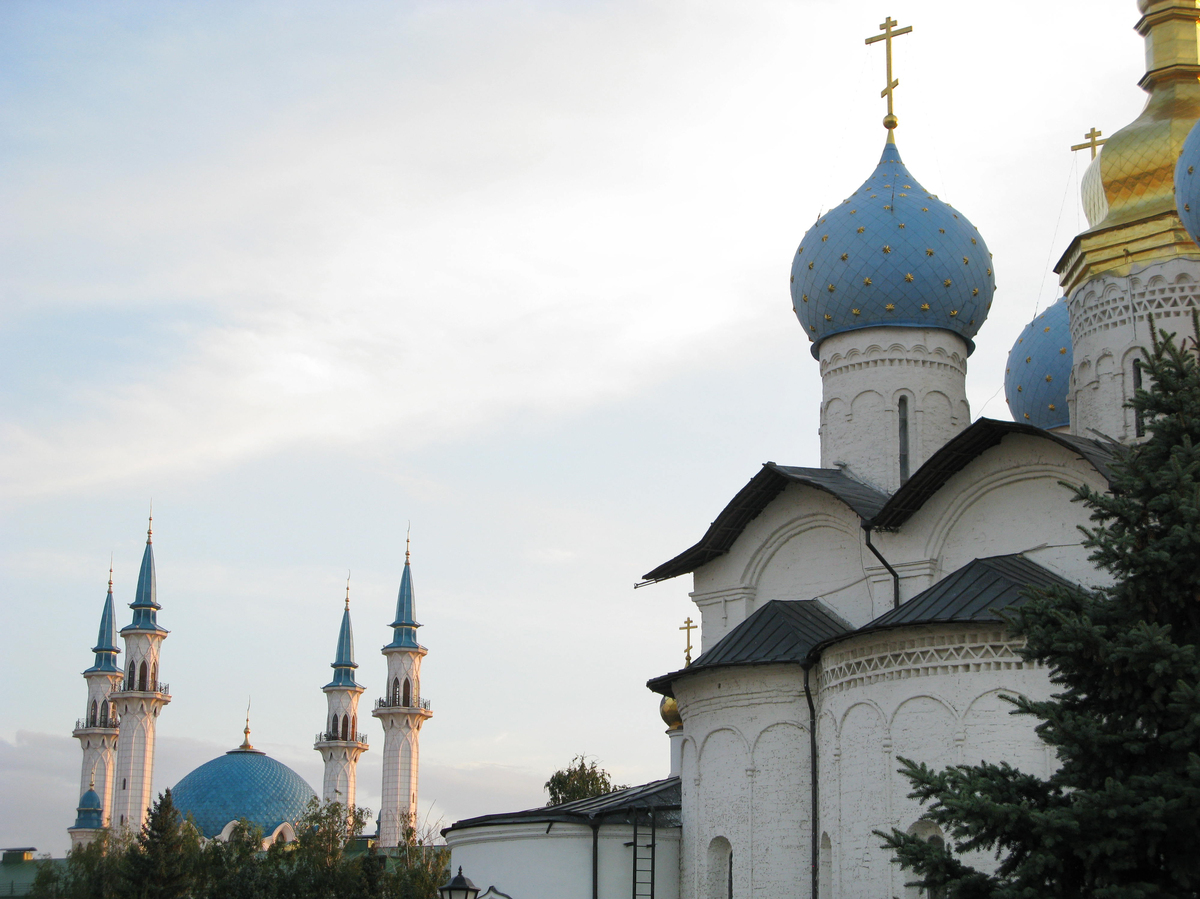 The domes of a Russian Orthodox church (right) share the skyline of Kazan, Tatarstan's capital, with the minarets of a Muslim mosque, a reminder of the city's history of peaceful coexistence between Christians and Muslims.

The attacks shook Tatarstan, a region along the Volga River in Russia's heartland.

While Russia fought Islamic separatists in areas such as Chechnya, Tatarstan has often been held up as a model of how Muslims and Christians could live together peacefully. The republic has nearly 4 million people, about half of whom are ethnic Tatars and Muslims.

Kazan is the home to Russia's largest mosque, completed in 2005, and worshippers go to daily prayers at dozens of other mosques in the city. Ethnic Russians make up about 40 percent of the population, and the onion domes of Orthodox churches often stand within sight of Muslim minarets.

Faisov was seen as a moderate who opposed a radical strain of Islam that some observers say has been taking root in Tatarstan for nearly two decades. He had angered some clerics by removing imams whom he deemed to be too radical.

Rais Suleymanov, who researches religious groups at the Volga branch of the Russian Institute for Strategic Studies, says that the fundamentalist brand of Islam known as Wahhabism was brought to Tatarstan by clerics who studied in Saudi Arabia and Egypt.

Suleymanov says that if the car bombing had succeeded in killing the mufti, the post would very likely have gone to a cleric he describes as "the chief ideologue of Wahhabism in Tatarstan," the imam of the main mosque in Kazan.

That imam, Ramil Yunusov, abruptly left for London after the bombing and has not returned.

Suleymanov says it's presumably because Yunusov fears he would be a suspect in the case. Suleymanov says the religious radicals in Tatarstan are also trying to make common cause with Tatar nationalists and separatists.

Common Cause With Separatists?

One nationalist group is the Union of Tatar Youth, known as Azatliq. Its leader is a lean 23-year-old named Nail Nabiullin. He and his friends have a very different version of who attacked the mufti and why.

Nabiullun says the Russian federal intelligence services carried out the attack, as a provocation to destabilize the government of Tatarstan. He says Russian President Vladimir Putin is pursuing a policy of centralization and taking more rights away from the regions.

The bombing helps create the impression that Tatarstan is under terrorist attack, he says, clearing the way for the federal government to seize control of the region and its resources — especially oil.

The Volga: Russia's River Of Revolution

Separatists are widely regarded as a small sliver of Tatarstan's population, but one that could be dangerous if their cause is united with religious fundamentalism.

The government of Tatarstan has been trying to limit the influence of fundamentalist clerics. Recent changes in the republic's law on religious freedom now require that Muslim clerics be vetted by religious authorities if they received their degrees outside Russia.

Some people may view this as an infringement on the rights of Muslim clerics, says Rafik Mukhametshin, rector of the Russian Islamic University in Kazan. But he says the state and society also have rights, including the right to select clerics whose views fit in with the realities of a multifaith community.

Meanwhile, in a video posted on the Web, a man who says he is the leader of a Muslim militant group in Tatarstan, claimed responsibility for the attacks on the clerics.