Accessibility links
Telescope Innovator Shines His Genius On New Fields Astronomer Roger Angel completely revolutionized the large telescopes that scientists use to look at the stars. Now he wants to use his mirror technology to make solar energy cheaper and more efficient. 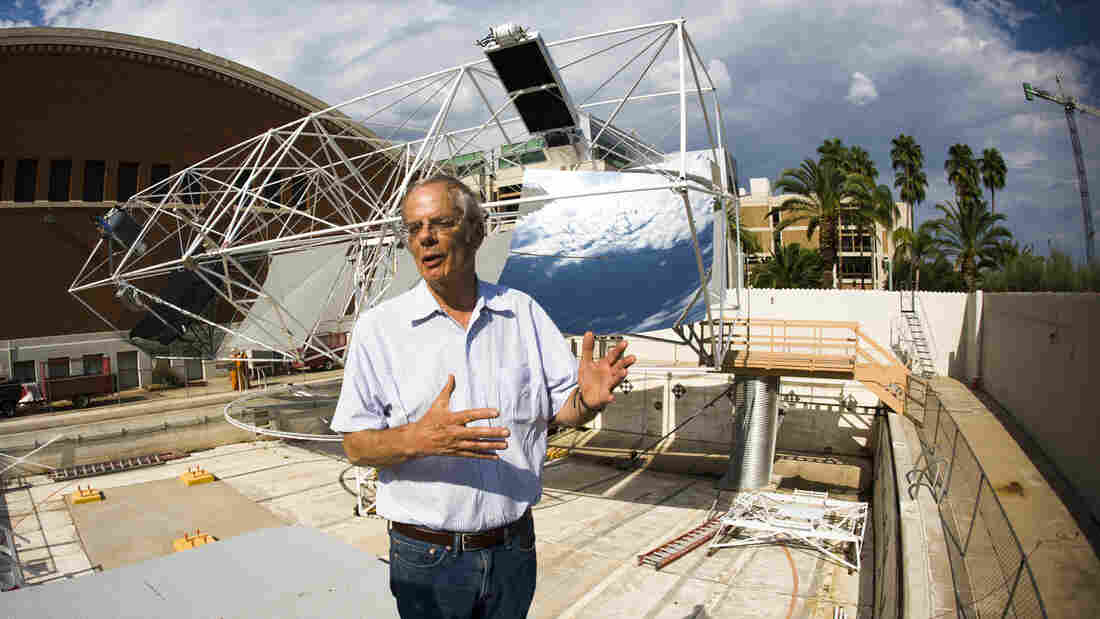 Roger Angel, an astronomer at the University of Arizona, stands in front of his new project: a solar tracker. Angel wants to use the device to harness Arizona's abundant sunlight and turn it into usable energy. Jason Millstein for NPR hide caption 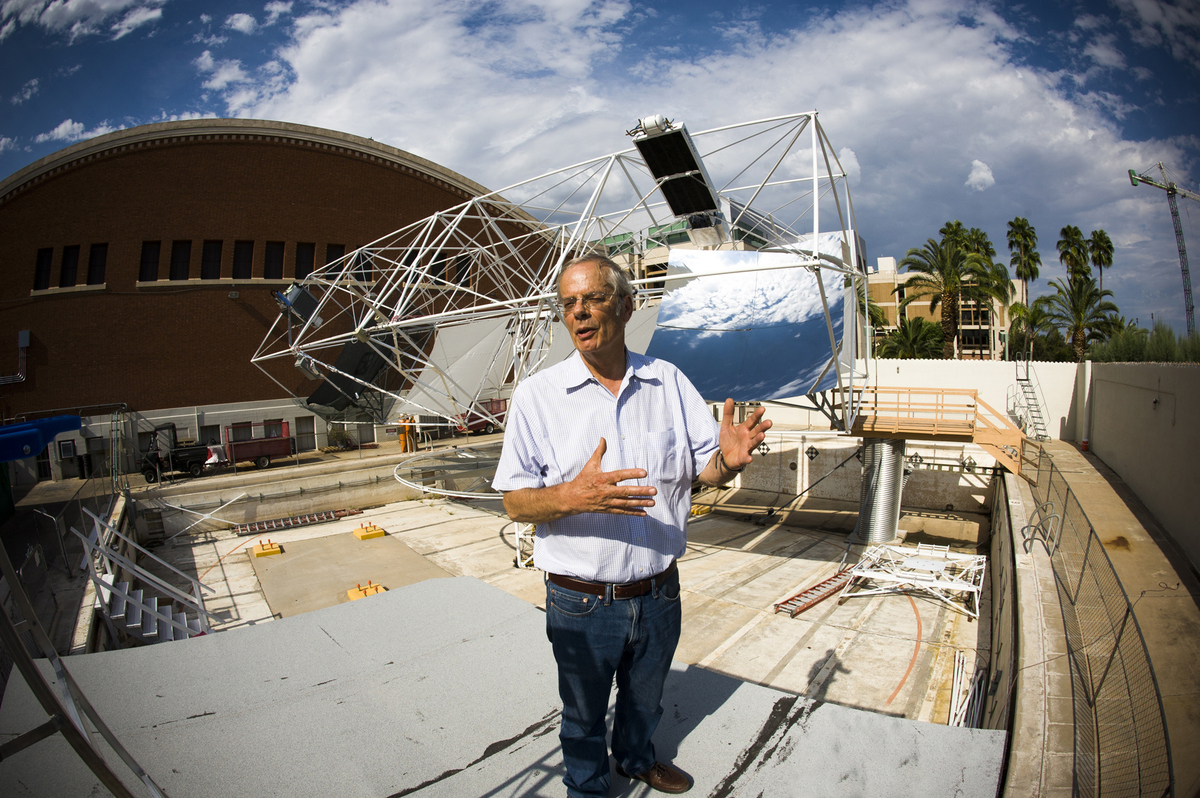 Roger Angel, an astronomer at the University of Arizona, stands in front of his new project: a solar tracker. Angel wants to use the device to harness Arizona's abundant sunlight and turn it into usable energy.

You may not be familiar with the name Roger Angel, but if there were ever a scientist with a creative streak a mile wide, it would be he.

Angel is an astronomer. He's famous for developing an entirely new way of making really large, incredibly precise telescope mirrors. But his creativity doesn't stop there. He's now turned his attention to solar power, hoping to use the tricks he learned from capturing distant light from stars to do a more cost-efficient job of capturing light from the Sun.

It's always fun working with Roger because he has different ideas about completely unrelated things that he wants to talk to you about. And that's just fun.

"Roger's always been someone who has lots of wild ideas; some of them are superb, some of them probably not so good. But he's incredibly creative," says Brian Schmidt of the Australian National University in Canberra. "That creativity coupled to sort of a genius is quite rare. So Roger's well-known around the world for having these brilliant insights of how to solve problems."

There's something important you should know about Schmidt: He shared the Nobel Prize in Physics last year for discovering that the expansion of the universe was accelerating. He says most scientists — and he includes himself — aren't the creative problem-solvers Roger Angel is.

"We tend to be the people that close out the game, and you know, do what is obvious and do it well," he says. "Where Roger is the person who really takes you and puts you into a new track and starts new ideas."

Angel runs the mirror lab at the University of Arizona in Tucson. I dropped by in January as Angel and his colleagues were about to cast one of their enormous mirrors 25-feet across. The process Angel invented solves a problem that had confounded telescope makers: how to make a mirror that big out of a solid block of glass.

Angel solved the problem with a design the creates a piece of glass with a hollow, honeycomb interior. The process involves loading glass onto a honeycomb-shaped mold in a giant rotating furnace. When the temperature reaches 2,100 degrees Fahrenheit — a point known as high fire — the glass melts and slumps into the mold.

Why a rotating furnace? By rotating, the glass begins to take on the parabolic shape it ultimately needs to have to focus starlight. It takes nearly a year to make one of these giant mirrors. He's made more than a dozen now.

Angel's mind is awash in ideas. For example, in the past decade or so, Angel has been searching for ways to do something about the threat from global warming.

In 2006, he wrote a paper exploring the feasibility of sending a huge glass shield into space and placing it in a spot where it would deflect 2 percent of the sun's rays headed for Earth. Doing that would counteract the warming effects of greenhouse gasses, according to Angel.

It's an ambitious notion. You'd need a shield "a bit less than 2,000 miles across. Pretty big," he says. You'd also need a new launching system to get the shield into space. Traditional rockets wouldn't do. Angel says a kind of magnetic gun that could send up the shield one small piece at a time should do the trick.

"It's always fun working with Roger because he has different ideas about completely unrelated things that he wants to talk to you about. And that's just fun," says James Burge, a colleague of Angel's at the University of Arizona.

Roger's always been someone who has lots of wild ideas; some of them are superb, some of them probably not so good. But he's incredibly creative.

Burge says Angel doesn't just have a lot of ideas. "He also has the ability to do the quick calculations or the very quick experiment to be able to see which ideas are good. And that's great. He energizes us with that."

Harnessing The Power Of The Sun

Angel is now turning his energizing energies to energy — solar energy, to be precise. He says his experience with telescope mirrors should help him build cost-effective solar power systems.

"That's what I've been doing for the last few years," says Angel, "[to] try to figure out how to make good-enough mirrors — much lower quality than what we use for astronomy — but good enough to get the sunlight to a decent image, and how to get those mounted so you can point them at the sun without too much steel and cost."

Angel took me to an abandoned swimming pool on the University of Arizona campus where he's built a working prototype of his solar power system.

It looks a bit like a giant box kite. A white steel frame holds a 10-foot-square mirror. The frame is mounted on a turret that can track the sun. Angel says that to save money, he uses ordinary window glass with a mirrored surface. He's figured out a way to bend glass panels into the right shape so that the light is concentrated on solar cells. Concentrating the light makes the solar cell more efficient at turning the light energy into electricity.

The prototype makes only a few kilowatts, but Angel told me he has some ideas of how he'd like to use that energy.

"What's the most useful thing you can do with a few kilowatts of power?" he says. "Well, you can charge your rechargeable car, your plug-in Prius. So I'd like to do that. It'd be a real good feeling driving around town, knowing the energy came from the sun."