Accessibility links
The Marlon Brando Of Screen Dance, 100 Years On Dancer-actor Gene Kelly would have been 100 this year, and his legacy of unparalleled athleticism and joyous, comic performance still looms large in popular culture. His versatility and his physical beauty were both part of his appeal. 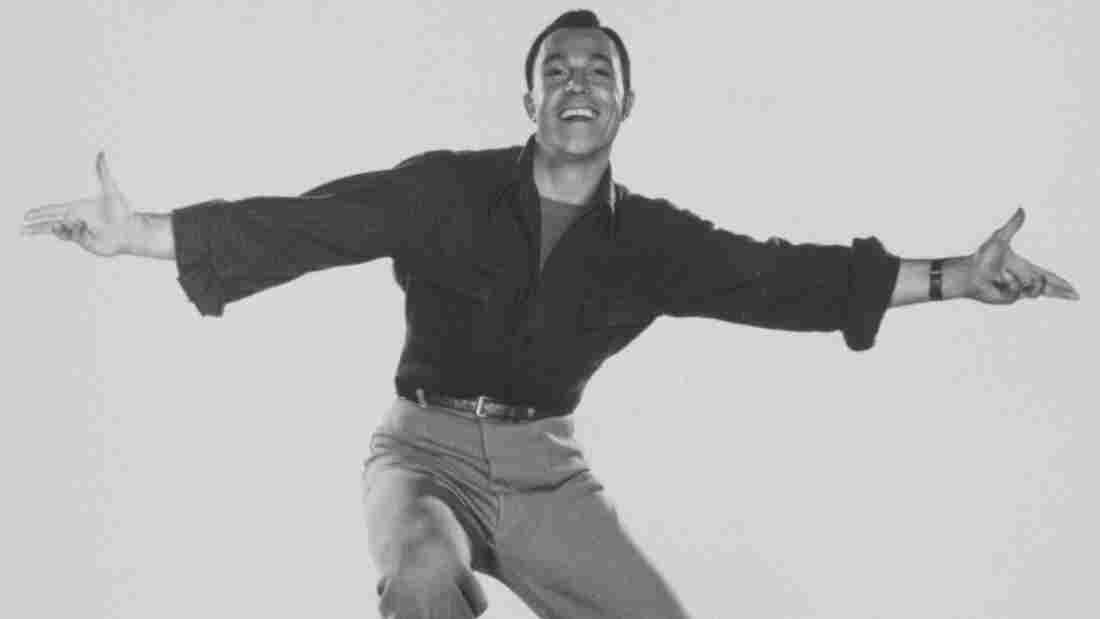 In his final MGM musical, 1957's Les Girls, Gene Kelly dances with Mitzi Gaynor to the Cole Porter song "Why Am I So Gone (About That Gal)." About three minutes into the dance, Gaynor is sitting at a bar, and Kelly, after scooting across the floor on one knee — that's after skidding across a table on his bottom — leaps to the top of the bar on one foot, slides down the bar on his right side, then grounds himself again for the rest of the duet.

Pure Gene Kelly: Athletic, acrobatic, still astonishing. And this was five years after his — anybody's, really — most famous movie dance of all.

That dance, of course, was his rendition of "Singin' in the Rain." Splashing, puddling, dripping, grinning, Kelly had a fever of 103 when he shot that number. In that year, 1952, the Motion Picture Academy gave him an honorary award — his only Oscar — for "versatility."

No kidding. Kelly was a dancer, actor, singer, director and choreographer. And besides all that, he was hunky! Virile! Not to put too fine a point on it: sexy, with his athlete's body, his biceps and tight T-shirts.

"He was that living image for male dancers," says Edward Villella, founding artistic director of the Miami Ballet and America's best-known hunky, virile male ballet dancer. Villella was influenced by Kelly's movie dancing in the 1940s and '50s.

"It was at a time when the male was not viewed as some kind of dancing entity," Villella recalls. "We were so used to Westerns and frontier-type masculinities, so the idea of a guy dancing was very, very foreign to American popular culture."

Kelly was living proof that male dancers didn't have to be "effeminate" — shouldn't be stigmatized as "sissies," which regrettably was the prevailing opinion in those days. His first wife, Betsy Blair, said Kelly "democratized" dance in movies. He came across as a regular guy; he gave audiences the idea that they, too, could dance in the streets.

But it was never easy. In 1982, Kelly spoke about the hard work of dancing, which he identified as a form of masochism.

"You have to punish your body," Kelly told an audience at the National Press Club in Washington. "Your muscles have to be tough enough and hard enough so that you can pick up the girl, and at the same time your legs have to be strong enough so you can jump over the table without taking 40 steps."

All while making it look absolutely effortless — not to mention like oh so much fun.

"So entertaining. So exuberant. So excited and happy to be there" — that's how Arlene Croce, the New Yorker's dance critic for 25 years, describes Kelly's presence.

"I think he's basically a comic, and a comic dancer," Croce says. "I love him as a comedian. First of all, he has this wonderful grin — a big, face-filling grin. His timing is comic, and his voice is witty. He's funny. He's a funny guy ... and when he dances with kids, he's wonderful in that way."

One great example, among many: the "I Got Rhythm" number in An American in Paris. Kelly, in chinos, his sweatshirt sleeves pushed up, sings and dances surrounded by delighted French children.

That film, with songs by George and Ira Gershwin, won six Oscars, including Best Picture, in 1951. In addition to dancing, singing and acting in it, Kelly also did the choreography. He mixed elements of ballet, tap, soft shoe, shuffle — all performed in that hunky Kelly fashion.

"Kelly to me is a very weighty dancer," Croce says. "He really gets into the floor, and his body develops his rhythm in connection with actual tap dancing."

Fred Astaire, by contrast, was a weightless dancer, lighter than air. Kelly knew gravity intimately, and knew how to dance with it. He once said, "If Fred Astaire is the Cary Grant of dance, I'm the Marlon Brando." But that's a case of apples and oranges — suave and sophisticated versus muscled Olympian.

I met him once. 1982. He'd just been honored by the Kennedy Center and was about to speak at the Press Club. He was busy charming admirers, before going out to speak. I was beside myself — which may explain why I asked if he wanted to dance down the hall with me.

He was 70 then, full of Irish charm and a spring in his walk, still. Self-assured. Distinguished. And that face-filling grin.

Kelly was 83 when he died in 1996, after two strokes. An unacceptable end for a person of his grace and speed. It's all still there, though. On this, his hundredth birthday, the best way to celebrate is to sit by a screen somewhere and watch him dance.