Accessibility links
For Chinese-American Adoptees, Matters Of Identity The documentary Somewhere Between chronicles three years in the lives of four young American women, all adopted, all Chinese by birth. Critic Ella Taylor says the film is a warm-hearted vehicle that lets the teenagers speak for themselves.

For Chinese-American Adoptees, Matters Of Identity

For Chinese-American Adoptees, Matters Of Identity 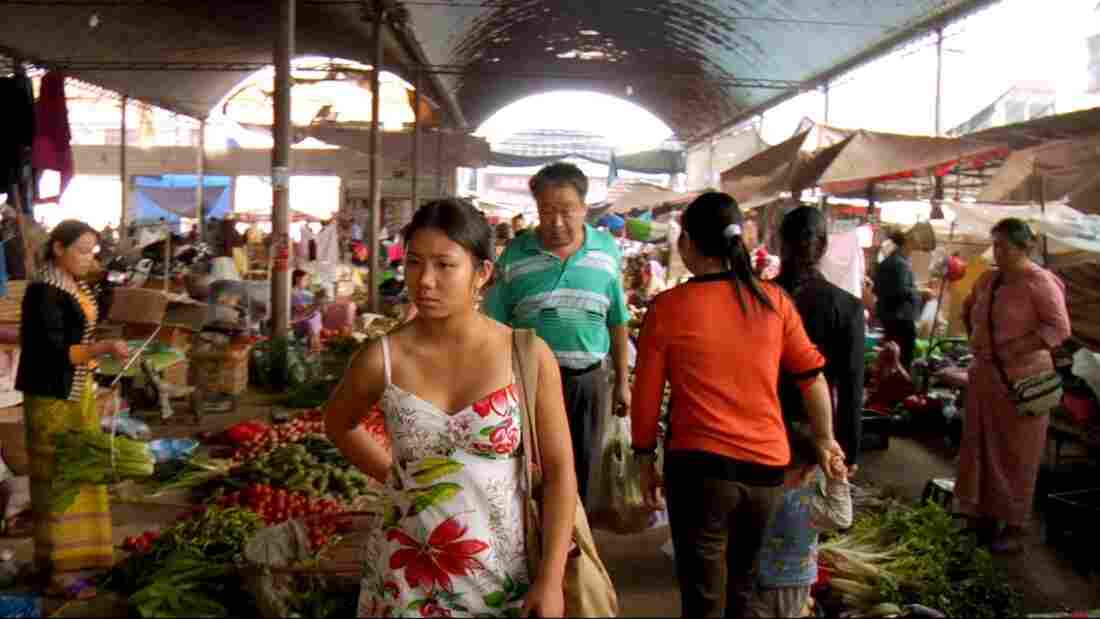 'Because I Was A Girl'

'Because I Was A Girl'

Of the roughly 80,000 Chinese children adopted in the United States since 1979, almost all are girls, abandoned at birth by their parents because of China's one-child policy, coupled with inheritance laws that favor boys.

Waiting for them at this end was the pent-up parental longing of thousands of infertile couples, single women (and a few single men) and gay and lesbian couples. I was one of those parents-in-waiting, and trust me, by the time I traveled with 11 other families to Guangzhou to pick up our babies, you could have put pet rocks in our laps and we'd have loved them to bits.

This is hardly unexplored territory, but until now most of the copious commentary on Chinese adoption has come from the parents' point of view. Now some of the girls are old enough to speak for themselves, and Linda Goldstein Knowlton, a Hollywood producer and an adoptive mother herself, picks up their story in Somewhere Between, a warm-hearted if somewhat over-orchestrated documentary that gives voice to four teenaged adoptees from loving but very different homes.

Knowlton, who spent three years tracking the girls at home and school, in Europe for a global gathering of adoptees, and returning to China for reasons I'll get into, could hardly have chosen subjects more charming, bright or seemingly well-adjusted. Jenna, who has two mothers, is a rabid achiever at her New Hampshire private school. Ann, a textbook American teenager, is hooked on pop culture and none too eager to seek out her birth parents. By contrast Fang, raised in Berkeley by liberal parents who divorced during the making of the film, returns to China to broker the adoption of a spirited little girl with cerebral palsy. And Haley, raised in a Christian family in Nashville, Tenn., makes several trips to China to find her birth parents.

Astonishingly, she finds them. (This almost never happens, given that the only information most families have about their daughters' origins is a form letter stating the child's drop-off location.) And though their reunion makes for a riveting set piece, it made me squirm.

To her credit, Knowlton never falls into the trap of blaming birth parents, most of whom are dirt-poor peasants forced by government policy into making terrible decisions for their newborns. 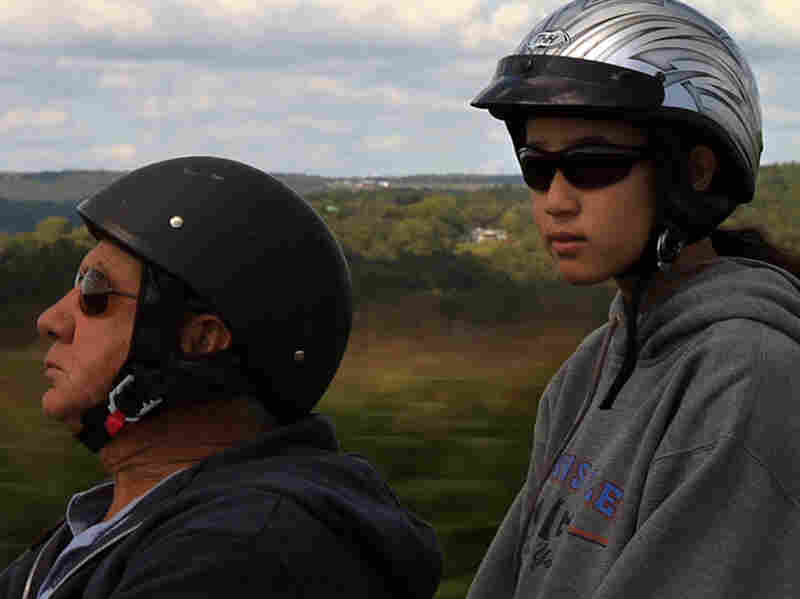 Ann Boccuti, one of the four adoptees featured in the film, is a pop-culture-obsessed teen, pictured here with her father Bob. Linda Goldstein Knowlton/Long Shot Factory hide caption 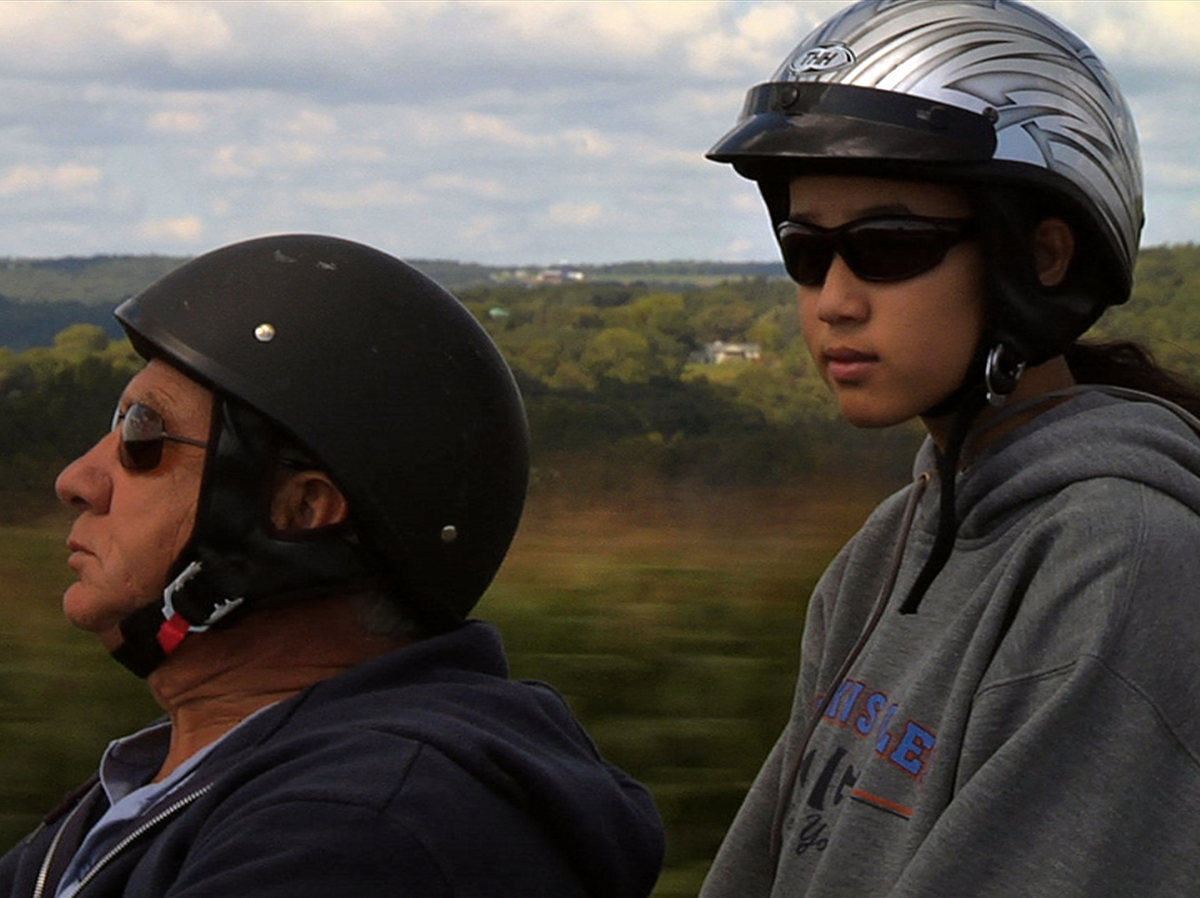 Ann Boccuti, one of the four adoptees featured in the film, is a pop-culture-obsessed teen, pictured here with her father Bob.

That aside, all four girls are thoughtful, moving and imaginative on the subject of their split identities. Haley thinks of herself as a "banana," yellow on the outside, white on the inside. Describing herself as "stuck between two countries," Fang laments that she's always trying to compensate for the fact that she was abandoned because she's a girl.

Watching the tears roll down Fang's otherwise cheerful face, I wondered whether she'd be this sad if she wasn't facing a camera. On the plus side, Somewhere Between is refreshingly free of the cloying, one-size-fits-all dogma that sometimes bedevils the adoption community. (I parted company with my chosen adoption listserv when I got tired of hearing about "the holes in all our daughters' hearts.")

Inevitably, though, the film makes it seem that these girls' lives are dominated by worry about who they are and whether they'll be emotionally crippled by conflicting allegiances. Adopted or not, few of us develop our identities in the abstract — least of all today's adolescents, who try out their ever-shifting multiple selves with their friends in every social medium, and are far more nonchalant about racial difference, let alone adoption, than we boomers can ever be.

My Chinese teen was bat mitzvahed last year; she celebrates the Jewish, Chinese and any other New Year that comes with a party. On Facebook, she brands herself as "Jew Crew," "Asian, so deal with it" and a Yankee Brit, among others. Accustomed to a polyglot world, she takes it mostly in stride.

Her only visible adoption crisis came when she was about 8, just after we'd watched the excellent movie Stuart Little, about a mouse adopted into a loving family who nonetheless has an "empty space" in his heart. A couple of hours later, my ordinarily sunny, unflappable child burst into tears and asked piteously why her mommy had let her go.

Caught off guard, I opted for honesty and told her it made absolutely no sense to me, and who wouldn't want to be the mother of a great kid like her? After a moment, she asked for her drawing materials and drew three female figures with Chinese features ("You, me, and my other Mommy"), then said firmly, "Okay, let's play something else."

I don't for a second doubt that my daughter's questions about her parentage will return many times in many forms, or that she will find different answers throughout her life. But she is lucky enough to live in a hybrid world, and I fancy she'll grow up as resilient as the four admirable girls who have found ways to make a virtue out of being somewhere between.